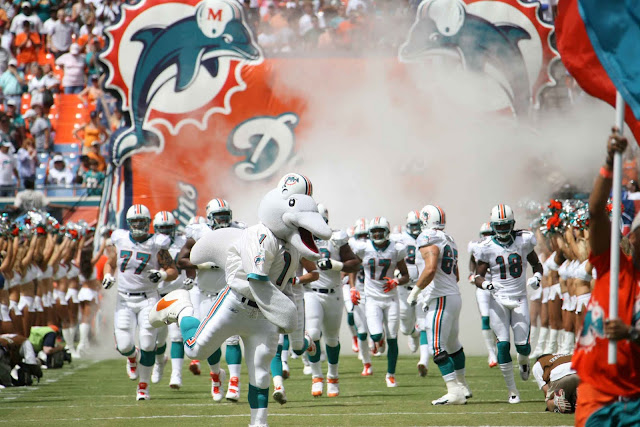 We are back today after a few days off from the blog, as we took some time to revamp the database update displays.  You will now see a link above that says Database Changes, and if you go there you will be able to see corrections that we've made to the database based on your contributions.  If you go to these pages, you will see a desrciption of the changes, as well as the NEW and OLD images.  One thing you can do is open the two images side-by-side in new tabs (if you're using Firefox -- I don't know if IE has tabs) and click back-and-forth between the two images and see the changes.  If you'll go to Update #13 I challenge you to describe in the blog comments the changes in the 1933-39 & 46 Bears.  This is how detailed and detail oriented our website is, specifically the attention to detail that Bill Schaefer has used in our graphics.  When you see how minute these changes are, you'll see just how serious we take this stuff.  The first person in today's blog comments who accurately describes the change in the 1933-39 & 49 Bears images will win a Kit Kat bar.  Bill and Tim, you're not eligible.

Please continue to join in on the fun debating our database images in our forum.  The Best NFL Uniform Tournament of All Time is taking a week off, but you can still vote on Week 3 matchups if you haven't done so already.  We'll be back next Monday with another round of voting.

Today our Bill Schaefer follows up on his monochromatic white article from last week with a Miami Dolphins tweak:
~ ~ ~

Any time I set out to make one of these uniform tweaks I know that I am probably going to rankle some of that team’s faithful.  I know that, but bear with me.

I stated in my last entry my nearly complete and total disdain of mono-white. While there were a few exceptions, most mono-whites fall into a negative perception in my eyes.  One that has always bothered me is the Miami Dolphins.

I understand the reasoning behind wearing the mono-whites at home as it helps to reflect the sun and heat of South Florida.  I also understand the team colors they use and why.  The aqua is, of course, representative of water while the orange represents the Sun. No problem.  I kept both of these for tradition’s sake.  But why not enhance the use of…say…dolphins?  Performing a Google Image Search on bottlenose dolphins, I came across these 2 photos.

The argument has been made that bears aren’t navy and orange; lions aren’t blue and silver; eagles aren’t green, etc.  I don’t dispute that.  However, cardinals are, well…cardinal red so there is a precedent. I’m just suggesting that another color be brought into the Dolphins’ repertoire – grey.

I may be one of the few who actually liked the silver jerseys that New England wore a few times in the past decade but eventually dropped.  This is partially what I based Miami’s new combos on. 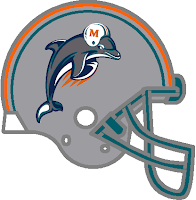 I started by redoing the helmet.  Although the helmet logo has been updated and modernized, does it really need the Sun?  I say no.  Does anyone really think “Miami, brrrrrrr?  We’d better show the Sun so people know it’s hot, sunny, and humid here.” I found a Sun-less alternate logo that I think works much better.  I used a dark grey directly from the crown of a dolphin’s head in the earlier photos for the helmet shell.  I made the dolphin in the logo a slightly darker grey than the helmet just for contrast. The aqua and orange are still used for central helmet stripes with a central orange, flanked by the helmet’s grey as a spacer, and followed by thin stripes of the aqua.  I kept the aqua facemask. 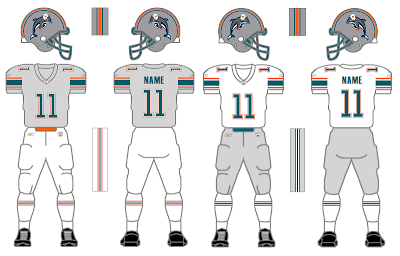 Moving to the jersey, I didn’t want to use the same grey as for the helmet for 2 reasons.  First, if the jerseys were that dark of a shade of grey, they’d never get worn and we’d still be stuck watching Dolphins home games with them wearing white jerseys.  Secondly, looking at the dolphin photos, you can see that, as you look from the top of their heads and their dorsal fins down towards their underbellies, the grey actually lightens several shades.  I’ve made the jersey (and pants) into a lighter shade of grey than the helmet.

I incorporated some orange and aqua northwestern striping on the sleeves.  I also placed identical thin striping down the legs and on the socks.  I always liked the sharpness and simplicity of the thin pants striping on the old Cardinals and Eagles pants.


Would this ever get used?  I doubt it.  It’s just the artistic version of someone who’s assembled thousands of uniform combinations and would like to fix what he considers broken.  Next week, the Jaguars.
4 comments

That Funny Ravens Logo (Red, Yellow and Black aren't their colors, are they?) 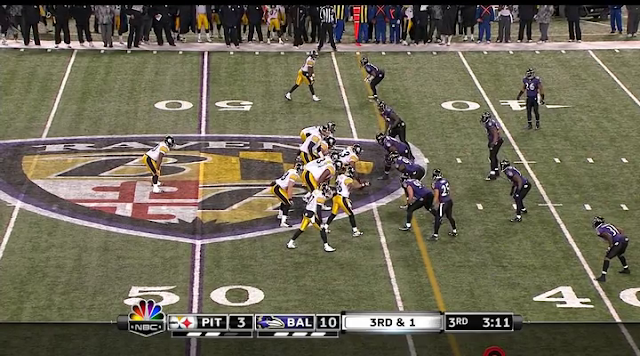 A few days ago at that other site, there was a discussion of the possible misuse of the colors grey and blue on the Texas state patch on the MLB Rangers' sleeves.  I agree that the lighting and shading is possibly depicted wrong, and while I realize that the limitations of embroidery may have limited the use of colors to just those four as people brought up in the comments over there, another problem I have is the length of the flag in relation to it's height.  If you unfurl it, I believe you have a flag that is over three-times as wide as it is high.  And I'm not even getting into the gray gradations they added to the 2-Dimensional star, but I'm sure there are regulations about flags and what you can do as far as three-dimensionally representing a two-dimensional flag. 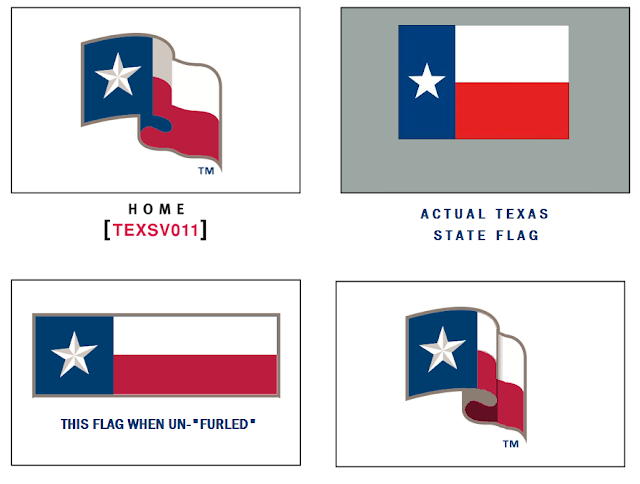 At any rate, in these above images, the lower right is a variation of another way you could depict the flag.  It would require a second shade of darker red, but if you use the brownish-gray instead of the blue for the shadow part and then shade it as I have, you have a version perhaps more palatable to those so interested in detail.  I'm sure, however, when the Rangers' adopted this patch in 2000 (yes they've had it for over a decade, and we're just noticing it now) they worked up a few different variations, and the team brass chose what they did.

What does this discussion of an MLB patch have to do with football uniforms, our focus here at The Gridiron Uniform Database?  Well, as we are discussing state flags, along with the Rangers' use of their state flag, baseball's Orioles and football's Ravens have also used the Maryland state flag within team logos.  But what do these items from the Maryland flag that are in the Orioles and Ravens' logos mean? 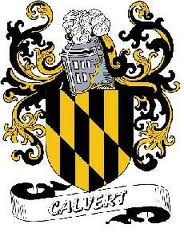 Many readers of this website, in discussing football uniform color issues, have brought up heraldry, as in our discussion of the tincture of Or, the color gold (not yellow), etc.  So today let's take a look at this Ravens' secondary logo and its' heraldric elements.  As you can see when you look at the Maryland state flag, the Orioles use the actual representation of the flag, within an orange circle with their team name, yet the Ravens' is not quite the same.  But what do these quarters of the flag represent?

The Maryland state flag design is based on the coat of arms of George Calvert, the English politican who was the 1st Baron of Baltimore, and basically the "founder" of colonial Maryland.  The yellow and black pattern was from arms granted to him by royal patent -- the vertical striped pattern representing a palisades that he "courageously stormed in battle," while the red and white cross bottony pattern is derived from the Crossland banner that belonged to the family of Calvert's mother.  (Later, during the Civil War when Marylanders who supported the Confederacy didn't want to use the Maryland flag because their state supported the Union, used the Crossland banner, whose red and white colors were seen as secession colors.)


In heraldry, marshalling is when you "cross" two flags in this manner, as in a union of a husband and wife's families, one way to do it is by putting one of the flags in the 1st and 4th quadrants, and the other in the 2nd and 3rd quadrants.  There are a few different ways to "cross" in successive generations, depending on which European traditions you are following, i.e. French nobility, British nobility, Spanish nobility, Germanic nobility, etc.  In some traditions, if you were crossing a four-field arms with another four-field arms, you would simply choose two of the four fields and cross them, in other traditions you would "quarter" the quartering, and then have eight fields.  In this method, after a few generations you would have a very confusing set of arms. 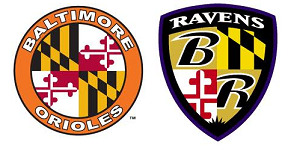 The state of Maryland flag, therefore, was the Calvert family colors "crossed" with the Crossland colors.  The Orioles use this exact pattern within their logo, but the Ravens' logo isn't quite the same.  It is the Maryland flag, which the Orioles use, but then it is "crossed" with the "B" and "R" of the Ravens' logo.  This of course, isn't actually heraldry, but just use of heraldric elements in a sports logo.  The University of Maryland Terrapins also have used elements of the Maryland state flag in their logos. 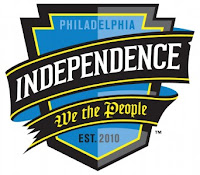 Are there any other NFL examples of teams using either heraldry or state or local insignia besides the Ravens?  We know that the Eagles used Philadelphia's city flag colors early in their existence.  (You know, before they tried out the grey/black in 1941.)  They "threw-back" to these colors in 2007, and currently the womens soccer team, the Philadelphia Independence, is reviving these colors in their new team's logo.

Speaking of women's soccer, good luck to the Women's World Cup team today in the final against Japan, but also good luck to Phil Mickelson, who just shot a 5-under par 30 on the front nine in the final round of the British Open to tie for the lead.  We know a lot of people "over there" are rooting for Darren Clarke, but a lot of people over here are rooting for Lefty.