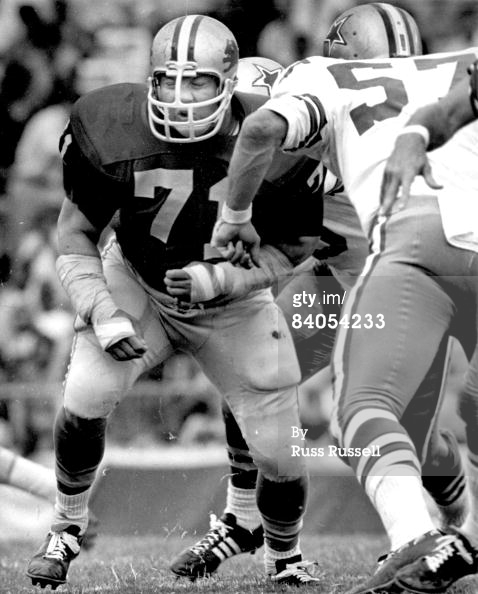 Beginning in 1968 the Detroit Lions and Dallas Cowboys had an uncanny resemblance that lasted 10 seasons. They got there from a series of gradual modifications and and one significant color change, then diverged through another series of small changes and the addition of a secondary color palate. 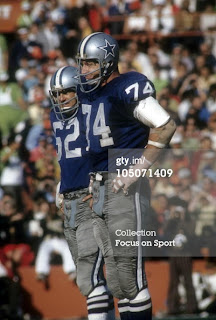 When a football fan thinks of the Detroit Lions, usually two things immediately come to mind: Thanksgiving and Honolulu Blue. Probably cool throwbacks too. Those plain silver helmets and basic medium blue jerseys are one of the NFL's iconic looks, and it has served the Lions well over time, making Detroit's team instantly recognizable, no matter if its Calvin Johnson, Barry Sanders or Doak Walker wearing them. In fact, this uniform served as inspiration for Al Davis when he outfitted his Oakland Raiders in the early 1960's, combining the silver with the West Point Military Academy's black.

The Lions heyday took place in the 1950's, when Bobby Layne's Lions served as a thorn in the side of Paul Brown's Cleveland team, besting them three times for the NFL title. Northwestern stripes were added to the white jersey in 1957, the year of Detroit's last championship team. The NW stripes were added on the blue jersey and socks in 1963, the same season the blue lion appeared on the silver helmet. A pair of blue stripes running down the pants and helmet completed the template for the modern Lions uniform for the next 40 years.

Through the late 60's and early 70's, white gradually became an accent color on the uniform. First as the center stripe on the helmet, then the pants. Eventually white trim bordered the silver numbers and Northwestern stripes on the blue jerseys and socks.

Silver, blue and white were in abundance at the Cotton Bowl in September 1968 when the Lions visited the Dallas Cowboys. Although Detroit saw an opponent that looked strikingly similar - silver pants and helmets with blue and white stripes - that wasn't always the case. 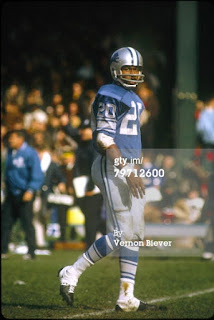 The Dallas NFL franchise was born eight years earlier and they looked quite different than they do today. The Cowboys wore a white helmet with royal blue strips and a star on either side. The jerseys were royal blue with white shoulders also sporting a star. The pants were white too, as silver did not appear until a complete uniform overhaul in 1964. This season the Cowboys began a white-at-home trend that still holds true today (excepting the occasional alternate jersey or throwback uniform.)  Dallas visionary and architect Tex Schramm was behind both decisions, noting that the new silver helmets and pants looked better on color TV, and the hot Texas weather played into their home field advantage. "When the Chicago Bears were over on the sunny side of Texas Stadium wearing those navy blue jerseys, it was about 20 degrees hotter. The visiting team had to sit in the sun and they just cooked."

Showing more symmetry with the Lions, in 1967 the Cowboys joined Detroit as the only NFL teams to annually host a Thanksgiving Day game. When the number of stripes on the Dallas jerseys and socks reduced from three to two, and a blue boarder was added to the helmet star in 1967, the Cowboys were as sharp as Tom Landry in his fedora and their classic look was set. There are the same uniforms Roger Staubach wore as the Cowboys were the NFC's powerhouse team throughout the 1970's, appearing in a then record five Super Bowls. 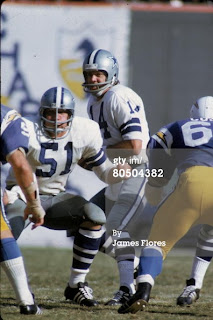 On the Cowboys march to their first Super Bowl appearance in 1970 they met the Lions in an NFC Divisional Playoff game that statistically seemed more fitting to the leather helmet era. The defenses so dominated the contest that the two teams combined for a mere 21 total first downs and a meager 130 yards passing. A first quarter field goal and fourth quarter safety were all the Cowyboys would need to advance to the first ever NFC Championship Game. As was the case for all five meetings during this era, the Cowboys wore their white jerseys and the Lions their Honolulu blue.

Beginning in 1978 the Cowboys began subtly alter their appearance. The first change was to the tone of silver used for their pants, to what they called "metallic silver-blue", although the helmets stayed the same. In 1981 the Cowboys made a radical change to their away uniforms, actually introducing a unique color palate. The pants returned to a true tone of silver, but the blue jerseys, socks and pants stripes were now navy blue, and they added the player's uniform number to the hip of the pants.  This new, albeit brief, trend showed up on the home silver-blue pants the following year in 1982 and stayed through 1988.

The Cowboys white uniform has basically remained consistent up to the present time, while their road uniform has gone through several iterations on progressively darker tomes of blue and striping and number font changes. Alternate jerseys with starred shoulders were also worn during the mid '90's. The Lions changed very little, through the 80's and 90's as well. Silver numbers on the blue jerseys became white in 1982 and the Northwestern stripes were removed from the socks in 1989. For one season they wore blue pants with the white jerseys in 1998. Adding black as an accent color in 2003 (and unfortunately as an alternate jersey in 2005) Detroit diverged from their Thanksgiving counterparts completely.

In a couple of weeks we'll be back with a slightly different twist to the "Matching Rivals" series. In 1969 imitation was indeed the highest form of flattery when a coach moved from a successful franchise to a struggling one, and brought his own uniform design with him to help change their fortunes.
2 comments