By Tim Brulia and Bill Schaefer

Ken Crippen (then-president of the Professional Football Researchers Association) sent me your info on what you have done.

Please contact me IMMEDIATELY when you read this either by email or by cell phone...Would like to discuss and see some of your work. I do like what I've seen of your Bears in the 1930's!!

Looking forward to connecting with you!

Tim aka Timmy B"

"Hi Tim.
Just got your email after I got home from school - back in session for a third week already. As you can tell, I kept busy this summer. Like I told Ken, I have done everything that was written up (NFL) from '33-'58 including the defuncts. I am currently in the middle of the AAFC with about 4 teams to go.  I have no problem getting my work included... I have borrowed some images from a few sights in order to complete the '33-'58.  I also redid many of the images from  "Past and Present" to include records, patches, and playoff performances as I was using them for screensavers.
Let me know what you need from me.
Bill Schaefer"

And thus were sown the seeds of the origin of what would become the Gridiron Uniform Database. Perhaps it is a bit pretentious to toast the anniversary of this connection that led to what we believe is the go-to site for the full history of Professional Football uniforms since 1920, but we'd like to share with you our take and the pre-GUD origins of research and correspondence between us.

From Tim's end:
I had been hoping that after Uni Watch printed my research on uniforms from 1933 through 1958 in February of 2009, I would be able to find someone who could render the descriptions into graphics, and then someone who could create a website to share our findings with the world. Several came forward, but the one who was willing to take on the challenge and...me...for the long run was Bill.

We started by going through each season from 1933 to 1958 to dissect each and every uniform; striping, color, hue, trim, sleeve length, everything but the fabric of the uniform (wait, yes, even that!). Then, in part II of the research, we went team by team to bring our research current from 1959 to 2009, which melded into 2010. Part III was a complete re-check for everything. This was done before we even thought of the search for someone (eventually, Rob Holecko) who could cram all of this into a website that eventually became the GUD.

Today, as we have just begun the 2014 season, Bill and I continue to perfect as much of the site as possible. No matter how major or how minor, we research every claim that either one of us may find, our talented webmaster Rob may find, our ace assistant Larry Schmitt may find, or any of our faithful followers may find. Before it makes its way to the GUD, Bill and I must be in agreement that changes or additions are to be made. We feel that after viewing countless photographs of football uniforms, we can make pretty good assessments of what makes it to the GUD.

Speaking for myself, Bill is absolutely the right man to be our graphic engineer. I doubt that anyone else would have put up with me and my finickiness for the nearly two years of pre-GUD research. His graphic skills have increased a thousand fold since 2009, likewise his knowledge of football uniforms and yes, I believe he has become every bit the stickler for detail as I am, and perhaps more. Bill, thanks so much for answering the call. Without you, and eventually Rob, we'd all still be at ground zero in the realm of pro football uniform research.

You're a good man, Bill Schaefer (and Rob, of course, but that's for another story)!


From Bill's end:
I don't know if I have much more to add to what Tim has already summarized or that we have already included in our "About" section. I guess the thing that gets me is the irony of everything that led to the creation of the GUD.
If my Dad hadn't had season tickets to the Steelers since 1977.
If he hadn't gotten me a team helmet magnet each game we went to that started my interest in football and the uniforms.
If the school I began working at in 2002 hadn't put a computer (my first) in my classroom.
If I hadn't have discovered Craig Wheeler's FUPP website.
If I hadn't started using those images as screensavers.
If Craig hadn't stopped updating the site in 2003 forcing me to make my own updates to his images.
If I hadn't stumbled upon the original artwork of an unknown artist who had created the basics of what would be our 2D template.
If I hadn't discovered my latent artistic abilities I never knew I had. (Maybe I'm really a Jedi knight, too, and just don't know it!)
If I hadn't first reached out to Ken Crippen who put me in touch with Tim.
If we'd never found Rob to do the rest of the dirty work for us.
If my wife had said at some point "For crying out loud, uniforms again?"
...(wait, that DOES happen at least once a week. Bless her heart.)
Finally, I guess the thing to marvel at the most is that all of this has been accomplished without Tim or I ever standing in the same room.
Here's to Tim and Rob. Five years of 'just getting it right.'

OK, time for your favorite thing, Timmy B's weekly NFL rankings. As always, my opinions are strictly my own and do not necessarily represent those of my fellow GUDdiees, Bill or Rob. These opinions are basically done on the fly and I may think differently a day or two later. As in the past, the traditions don't matter near as much to me as the colors, the more colors, the more likely I bump the rank of the matchup. Please don't look for consistency, because you won't find it here. The rankings are meant fully for fun and really, if you take offense, seek shelter immediately!!

16) Raiders-Jets: OAK in black/silver, NYJ in white/white. Sorry, me no like. Raiders do salvage this from the heap with the silver and black, but the Jets head to ankle in white is a look I am not fond of at all. No green pants, no green socks, just a white overload. Bah, humbug. 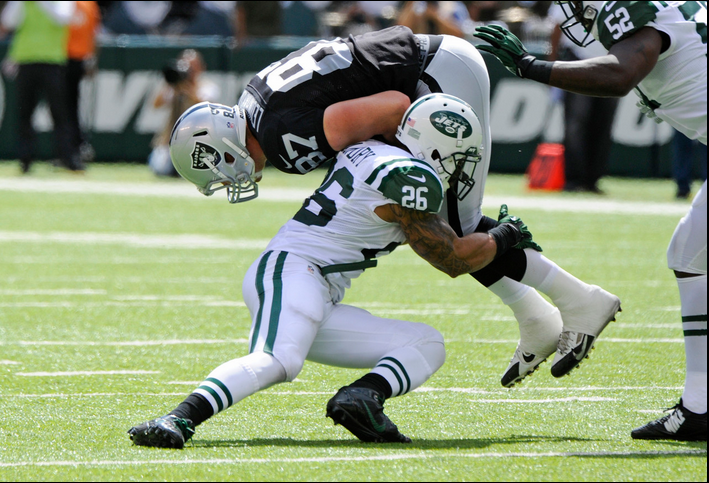 15) Patriots-Dolphins: NE in navy/silver. MIA in white/white. Ummm, not a fan, The Dolphins in all white is not all right. Pats outfit is fine, with the navy, silver and a hint of red. Miami in loads of white, some aqua and a breath of orange, nah.

14) Jaguars-Eagles: JAX in black/black, PHI in white/white. By now you may have heard that the Eagles won't have their green jerseys ready util well into the season due to the difficulty in getting the shade of green right by the Eagles and the NFL. So, the Eagles go all white. The Jaguars, surprisingly, by-pass the white pants for an all ebony look. I can't get my arms around the starkness of the unis.

13) Bills-Bears: BUF in white/white, CHI in navy/white. Several years ago, the Bears started off their home games with white, a pleasant change from the norm. The Bills have a gorgeous set of blue pants that can and should be worn with the white jerseys. Alas, no such luck here. Too much white here and thus the lower level for this matchup.

12) Chargers-Cardinals: SD in white/navy, ARZ in red/white. Open question: Most of us yearn for the powder blue jerseys for the Bolts. What about powder pants?? Anyway, this all-white helmet affair offers red, navy, yellow and bits of powder blue and black. Rather average to me.

11) Colts-Broncos: IND in white/white, DEN in orange/white. While many dig the Colts minimal look, I am not aligned in the dig category. I'd love a blue pair of pants to add pizzazz to this stark, bur quite traditional look. The Broncos, still look wonderful in the orange jerseys, trimmed in blue and white. They, the Broncos, save this matchup.

10) Vikings-Rams: MIN in white/purple, STL in navy/navy. Always take a shine to the Vikes purple trousers. Not quite so much for the all navy Rams look, Desperately need a return of the gold bottoms for the Rams. An overload of dark stuff here. 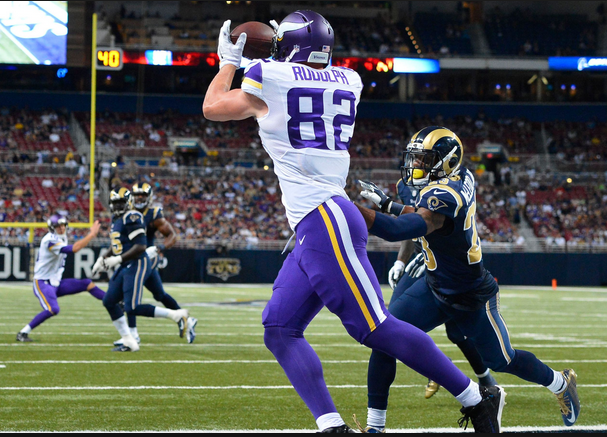 9) 49ers-Cowboys: SF in red/gold, DAL in white/mint. ....annnnnnd yet another season of the JonesBoys in their 50 shades of blue. The Niners in the dependable red and gold look featuring the hacked up sleeve stripes. It adds up to a nice matchup but not much more than that.

8) Bengals-Ravens: CIN in black/white, BAL in white/white. It's early, so the Ravens take a turn in white at home (WAH). And another game where if one or the other team (but not both) whipped out their black pants, it would have scored a few brownie (blackie?) points with me. No dice. And a below the bar matchup.

7) Titans-Chiefs: TEN in white/navy, KC in red/white. One year ago, for their home opener, the Chiefs stunned the uni world with a red-red stunner that dropped my jaw in delight. This week, the Chiefs stay rock rigid with the traditional red over white. Couple with the efficient white over navy of the Titans, that's not a bad thing. I'm fond of this matchup.

6) Packers-Seahawks: GB in white/yellow, SEA in navy/navy. The season's lid lifter features two strong identities. 20th century against 21st century. The yellows and greens bounce off well against the navy and wolf gray, but not so much against the lime greens.

5) Browns-Steelers: CLE in white/brown, PIT in black/yellow. Traditional rivals, for the most part, in traditional garb. But the Browns did grace our presence with the straight brown pants. The brown pants do offend most, but not me. Just wish the pants had some stripes gracing the sides. A nice batch of colors.

4) Giants-Lions: NYG in white/gray, DET in honolulu blue/silver. Nothing major, but I do find this matchup rather appealing for some reason. Both teams busted out patches; Giants for their 90th season and Lions with a William Clay Ford memorial. Maybe the red, the blue and the glorious honolulu makes this a pleasant matchup.

3) Saints-Falcons: NO in white/gold, ATL in red/white. Kissing cousins from the south, black is a common denominator for these two, but apart from from the Falcons helmet, the darkness is kept to a minimum. No black jerseys, no black pants, just a lot of red and gold, with black just there to compliment. As a result, this works nicely. 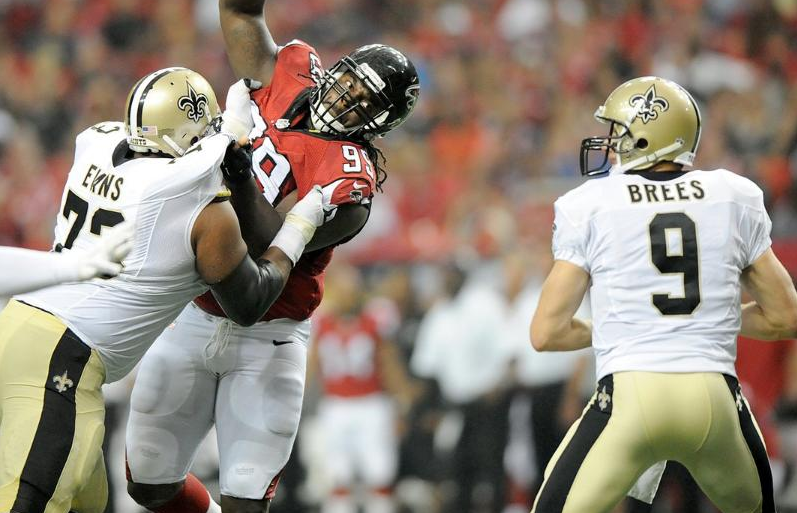 2) Panthers-Buccaneers: CAR in light blue/silver (alternate), TB in white/pewter. This one rocks. The Bucs, the lone changer of uniforms for 2014, with the grossly oversized helmet logos and the alarm clock number font, meet the Panthers in their classy carolina blue alternates with the silver bottoms. While the Bucs have a very busy look, it is distinctive and I admit to enjoying it. The Panthers in a jersey that I dearly wish would be the first choice and I heartily thumbs up this one. 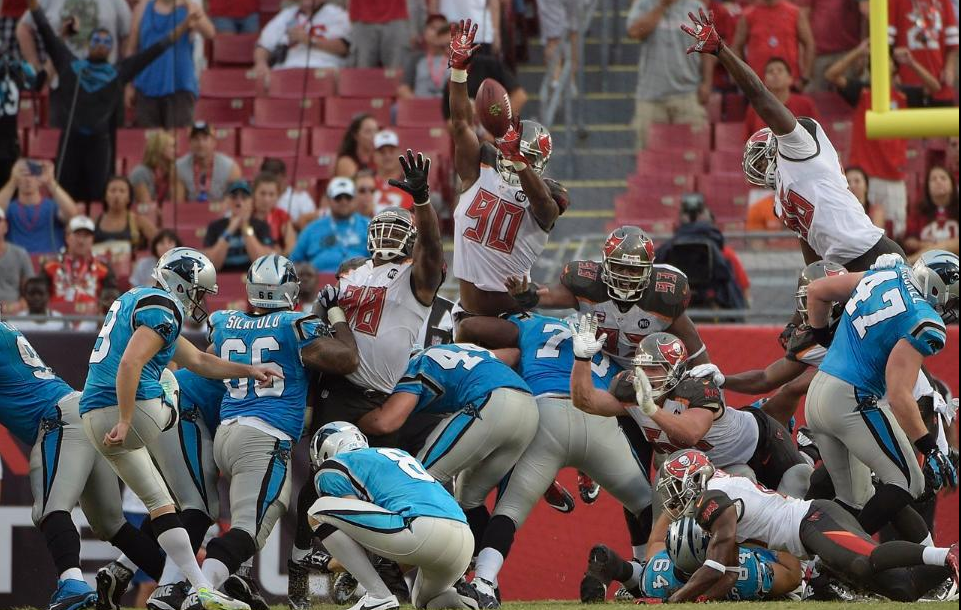 1) Redskins-Texans: WSH in burgundy/yellow, HOU in white/white. Texans usually start their home schedule in all white and such was the case in 2014. The Redskins respond with the cracking but terribly inconsistent striped burgundy-yellow combo. From a color perspective, with navy, red, yellow and burgundy, this is a sweet looker.