The offseason is in full swing but we, at the GUD, are never offseason.

Unless you've been living under a rock, you and everyone else in the uni-verse are aware that, not only did Tampa Bay unveil a new helmet a few weeks ago, but, when promising some other uniform updates - while not being anything 'major' - the Bucs pulled a fast one and really let us have it with a complete overhaul. 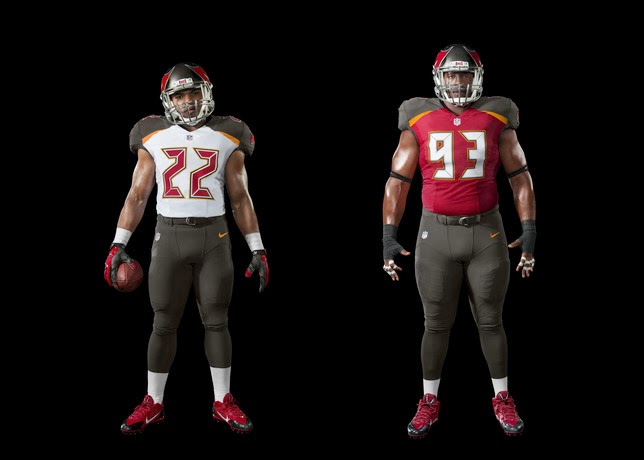 Many have said "If it ain't broke, don't fix it." I tend to agree. However in working to put together the Bucs' GUD graphics for this season, I have to admit that they are growing on me a bit. Like others, the number font sponsored by Timex, Rolex, Seiko, TAGHeuer, or whomever is still an issue. Given time, I think we'll get used to it. It's not corny like the Vikings' numbers which sometimes have wings/sails/ship parts and sometimes they don't. My question revolves, though, around the 'shininess' factor itself.

From 1979-81, the Lions wore blue home jerseys that had numbers and stripes that had a metallic, sparkly appearance. After 1981, the NFL made them ditch it. It escapes me as to whether the change was necessitated by the shininess factor itself or whether the numbers (and stripes) added an extra grippy-ness when the ball was held against any of these areas in a fashion similar to the aptly named grip-strips that were attached to many jerseys back in the 1920s and 1930s. 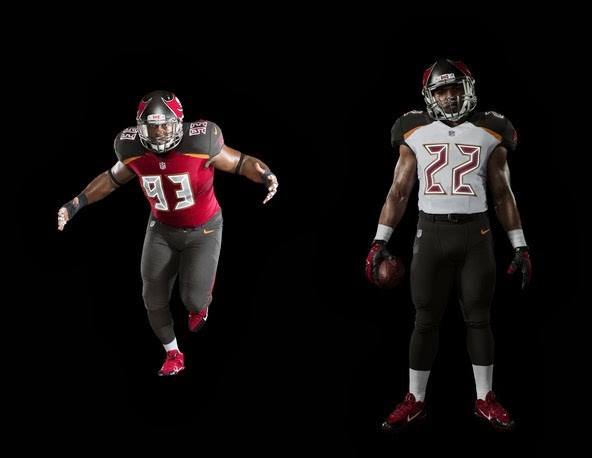 If the shininess was the reason the Lions had to change their jerseys, why would Tampa be allowed to use a similar luminescence 35 years later?

In case you haven't looked recently (past month and a half), Rob has been working diligently to use the offseason's downtime to install dozens of updates to the site since late January and more are yet to come.

On the horizon is a major update that involves a team's entire history.

We will be updating the entire 1960-current history for the Kansas City Chiefs. You may have noticed that the red for the Chiefs (especially in the last 20 years or so) just isn't right. We think so, too. Along with updating the color for all of the Chiefs' images, I am also making modifications to their helmet history. I was never happy with how the early variations were being depicted. I've got it covered now. Their are also some sleeve modifications and revised placements for manufacturer's logos thrown in as well.

This is the second franchise that's gotten a facelift on our site in the last few months. In Rob's updates you'll find where we've updated San Diego's shade of navy from 1989-2006. They now possess the same shade of navy as division rival Denver.

There's another large project that we've got under wraps. We're taking baby-steps on it and every time we get a chance to jump in with both feet, someone (Tampa Bay) grabs us and says "Not so fast, guys. Deal with this first!"