Timmy B back atcha. Thanks to Rob for pinch-hitting for me while I was "on assignment." Much appreciated. We are now hitting the home stretch for 2012. I thought I'd list those teams that - so far - appear to have shelved some uni elements for 2012:

Cardinals: red pants. Quite disappointing.
Bears: orange pants. Then again, I'm not sure they actually have these.
Browns: brown pants. Think I heard that they still have these available, but thankfully, have kep them in the closet.
Broncos: white pants with orange stripes.
Texans: red pants.
Dolphins: aqua pants. Far and away the biggest disappointment of 2012.
Vikings: purple pants (on the shelf since Week 10 of 2010. And the throwbacks.
Seahawks: gray jersey alternates. Perhaps because the NFL doesn't know how to treat them...a dark jersey or a white/light top?
Buccaneers: white pants. Sad, because the pewter/red/white/black combo is bangin.

With that, let get to business:

Note that for this week and next week, ALL teams are sporting commemorative patches for the Pro Football Hall of Fame's 50th Anniversary. These will not be noted below.

#16: Cardinals-Seahawks: ARZ in all white, SEA in all navy. Too much mono. This game practically begged for some red pants and gray pants. But the Cardinals locking the red pants in the equipment trunk for 2012 and the Seahawks insisting on the mono-navy for all home games leaves me so glum.

#15: Broncos-Raiders: DEN in all white, OAK in black/silver. Would like to see a little more orange here, but a matchup seen every season since 1997, hasn't yet dulled my senses.

#14: Falcons-Panthers: ATL in the all white, CAR in black/silver. As you likely know by now, the Falcons all white road look bores me, and after the electric all black look of the Panthers a few weeks back, this outfit is a let down. I think changing the socks from black to carolina blue would juice this up loads.

#12: Eagles-Buccaneers: PHI in all white, TB in red/pewter. The wrong teams in the wrong pants. Put the Eagles in green pants and the Bucs in white pants, and you might have this week's winner. BUT...noo. So this becomes a fair-middlin matchup.

#11: Jets-Jaguars: NYJ in white/green, JAX in all black. Jets rock the brilliant white-green combo for the first time in 2012 and it is so long overdue, and trust me, it is desparately needed against the Jags' all black shame. Saves this from certain bottom of the heapism.

#10: Rams-Bills: STL in all navy, BUF in all throwback white. Bills going WAH again courtesy of the 60's era throwbacks. Rams going with the best they could do, all navy. The Bills all white throwbacks doesn't compare to their recent blue throwbacks. Having said that, this is OK, but not a disaster.

#9: Saints-Giants: NO in white/black, NYG in blue/gray. Don't get me wrong, I really like the Saints black slacks. But now and then, we do need to see the gold trousers, too. This game marks - amazingly - the 10th straight week of the Saints in black. Matched up against the Giants standard, it still works well.

#8: Ravens-Redskins: BAL in white/black, WSH in burgundy/yellow. Really, not that bad. Apart from the mandated white (Ravens white jerseys), rather nice. Black with gold and purple trim, and burgundy with yellow. I think this one is a nifty matchup.

#7: Texans-Patriots: HOU in white/navy, NE in navy/silver. The navy pants of the Texans look darker than the navy jerseys of the Patriots. Actually, despite the similar color motifs of these two, the design elements carry this one off. All the navy makes the red jersey numbers of the Texans jump. And the Patriots silver stands out a little more than normal.

#6: Titans-Colts: TEN in white/columbia blue, IND in blue/white. A lot of blue and a lot of white. Unlike the last time these two got it on though, I am liking this matchup mucho. The right amount of the various shades of blue; columbia, straight and navy that compliment rather than hamper.

#5: Lions-Packers: DET in white/silver, GB in green/yellow. Traditional to be sure, but a nice standard to continue. Silver, yellow, honolulu, green, and a touch of black. When the Pack go green as here, this matchup will never hit the bottom.

#4: Bears-Vikings: CHI in white/navy, MIN in purple/white. Playing for the second time in three weeks, no real surprises on the clothing end. I would have liked the Vikes to pop out the purple pants here. Wow, it would have been a stunner. But still a nice visual with navy, purple, orange and yellow.

#3: Chargers-Steelers: SD in white/navy, PIT in black/yellow. I always liked this uni matchup and this time it's no different. plenty of old-school black and a bit of new school navy. Certainly in the top half of the week's matchups.

#2: Cowboys-Bengals: DAL in standard white/mint, CIN in alternate orange/white. Bengals break out the orange jerseys and socks. Might have been a good idea to unleash the black pants with the orange for a knockout punch. Still, the orange plays off the Cowboy myriad of shades of blue in a very good way.

#1: Chiefs-Browns: KC in white/red, CLE in brown/white. This one is sweet. Chiefs red pants and the orange, brown and white of the Browns is a beauty. That red/orange/yellow palette is stunning.

Today we begin our 5th journey into examining whether or not  the uniform match-up we saw at the Super Bowl was the best option available. 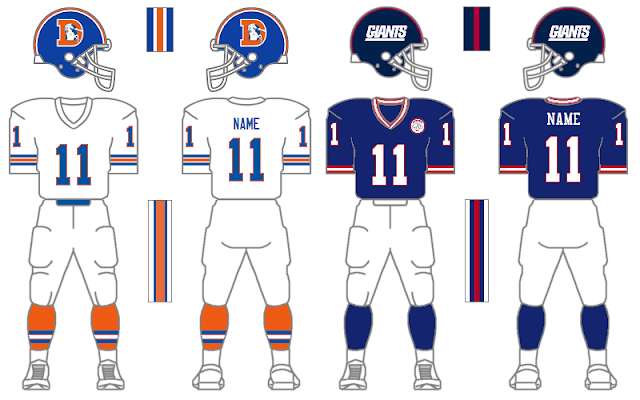 ACTUAL: This is actually the first occasion in which a team appeared in a Super Bowl wearing a memorial decal from the entire season. If this were to happen now, I wonder how teams would arrange a memorial patch like this one, the annual Super Bowl logo patch, and a Captaincy patch? It would make for one crowded uniform! Anyway, the fact that both teams go monowhite for their road apparel makes this a tough call. 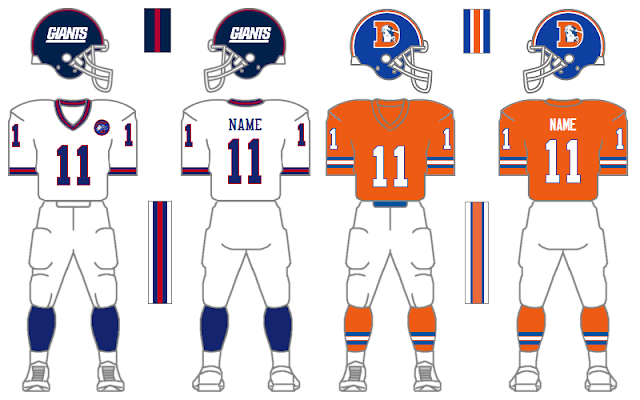 ALTERNATE:  But, like the Dolphins in SB VIII, the orange socks add more to Denver's monowhite than the typical blue socks add to New York's monowhite. 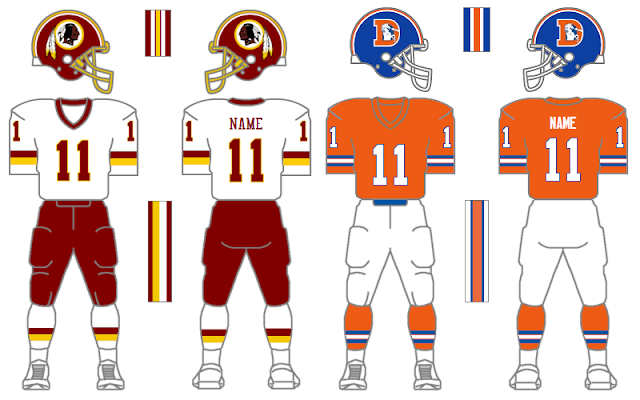 ACTUAL: I think this one contains little argument. 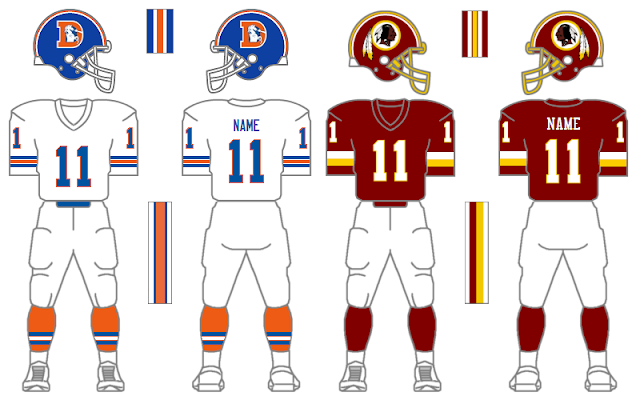 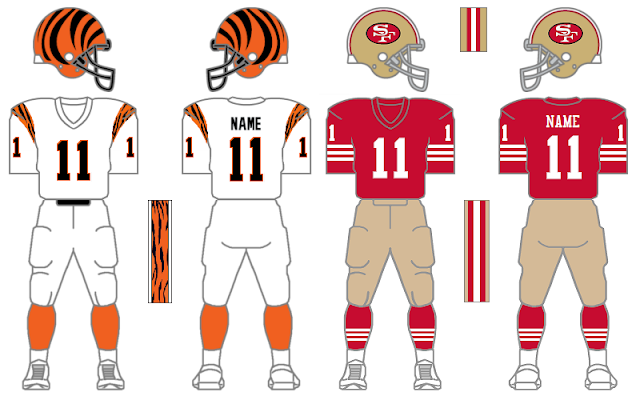 ACTUAL: The third Super Bowl 'rematch.' Good, but not great. 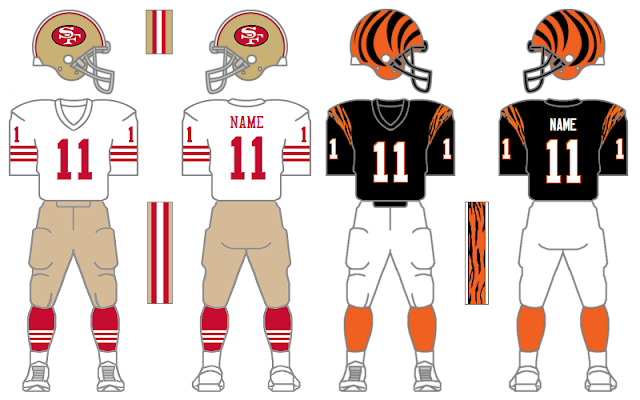 ALTERNATE: A redo from seven years earlier would have looked better.
EDGE: ALTERNATE 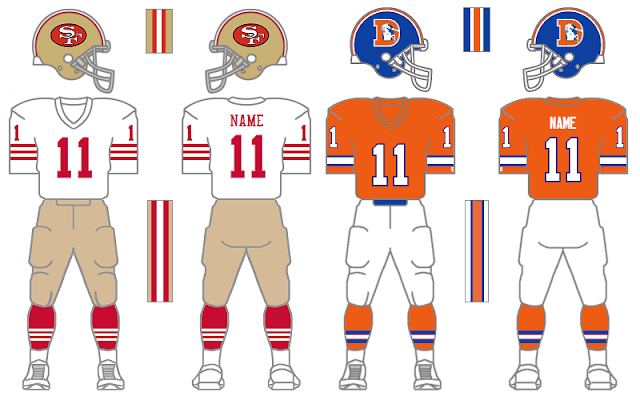 ACTUAL: At least this was a good-looking blowout. I remember this as the first Super Bowl I actually stopped watching at halftime. 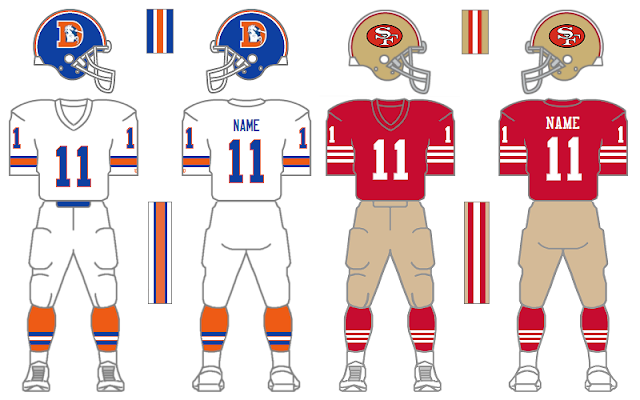 ALTERNATE: I may have stopped watching by the end of the First Quarter if this had been the pairing.
EDGE: ACTUAL 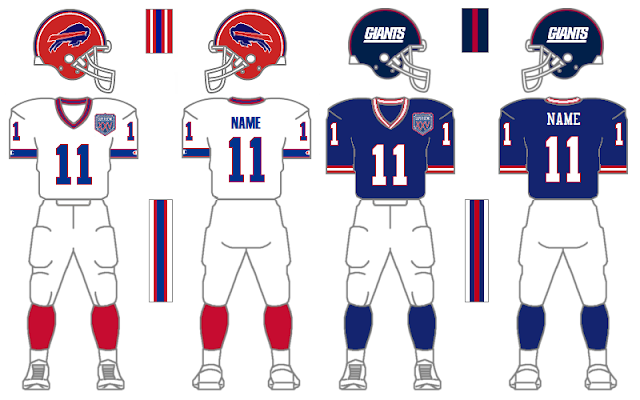 ACTUAL: Why are these games with two teams who have monowhite roadies so difficult to choose between? 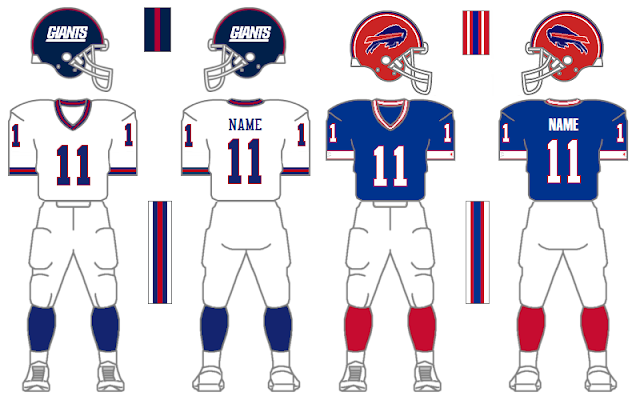 ALTERNATE: The Giants' monowhite with blue socks and helmet does not set itself off from Buffalo's blue jersey as well as the red of Buffalo sets it apart from New York's blue.
EDGE: ACTUAL

With the first 25 years in the books, ACTUAL, with another round of 4-1, ACTUAL improves to a 17-8 margin over the ALTERNATES.

With Buffalo set to appear in the next three games, and getting to wear their home blues in each, it doesn't look good for an ALTERNATE comeback just yet.

Return next week for the next segment!
Bill Schaefer
0 comments