This will be our last uniform rankings for 2014. We hope you have enjoyed them.

2) Colts-Patriots: IND in white/white, NE in navy/silver. In many ways a very boring matchup. In some ways, not all that bad. The Colts, in their understated all whites, with only blue trim and a rather conservative presentation, is well liked by a lot of people for that very reason. No frills, basic block numbers, a two stripe shoulder pattern, two simple stripes on the pants, solid blue socks, topped by a white helmet with a single blue stripe and a blue horseshoe on the sides. The basics of which haven't changed in well over 50 years (though there was some tweaking in the 1980's). The Patriots meanwhile, underwent numerous changes to their wardrobe throughout their rather zig-zag history until they struck gold in 2000 with a look adopted then that has barely changed since then. Navy jersey, with double trimmed white numbers, logos on the sleeves, some side panel trim, pants that are silver/gray with bold navy striped edged in red, solid navy socks topped off with a silver helmet featuring the so called "Flying Elvis" logo facing forward on both sides. When these two looks match up, it combines fairly well, though dominated by the blue and the Colts in all white, save for the blue socks. Silver then speaks to us, with the scant red trim giving some perspective. Not one of my favorite uni clashes, but I have certainly seen worse. 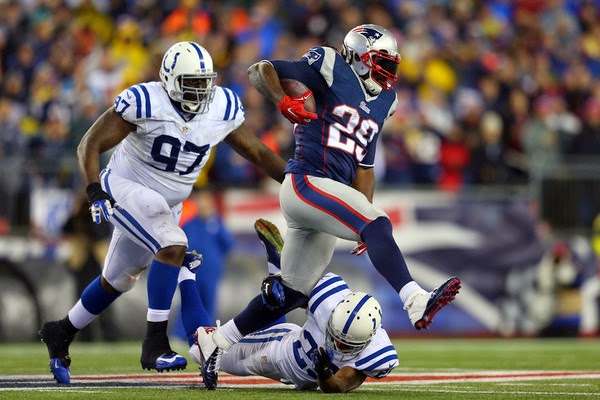 1) Packers-Seahawks: GB in white/yellow, SEA in navy/navy. Compared to the AFC matchup, this one is a lot more exciting. In my youth, I admit to enjoying the NFC uniforms more than the AFC digs. I found them to be more colorful, imaginative, vibrant. I still do. Both teams resonate with me. The Packers in their legendary green and (yellow) trimmed white jerseys, brilliant yellow pants with green and white stripes and solid green socks topped the legendary yellow helmet with the iconic white and green oval G. A design (like the Colts, tweaked some over the years) that hearkens back to the time Saintly Vince Lombardi personally designed the unis back in 1959. The Seahawks on the other hand, sport a uniform that is a bout as modern in design as there is in the NFL, in only its third season, the all navy approach from head to ankle is unmistakably Seahawk. Spruced up with modern elements, including gray patterned numbers flanked by that modern scourge of neon green, the V-styled trim on the sleeves include an area of neon green specifically for the Nike logo to be shown off. The navy pants with a series of a "wing pattern" horizontally positioned inside the neon green stripe. solid navy socks, and capped by a helmet with the updated Seahawk logo with a sublimated front pattern section, perhaps the first ode to the 21st Century helmet model. Pairing these two distinctly different uniforms for game action works very well. The clash of traditional and modern is great as are the colors. Green, yellow and white meet a uniform distinguished by navy, gray, and hot green. designs that are carried off well in spite of the old vs. new clash. Not the best matchup, but one that I feel is a lot better than average. As stated before, this is the last ranking for the season. I will likely review the Pro Bowl and perhaps a little review of the Super Bowl matchup. But as they will be the only game in town on those specific weeks, there will be no rankings.

Till next time, take care!