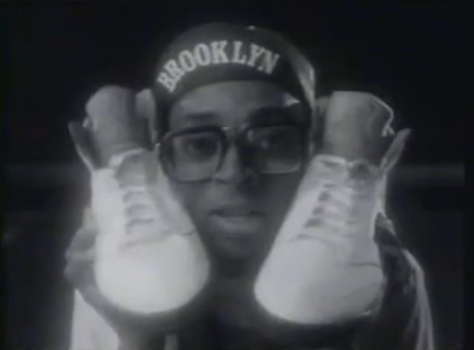 Last Spring, Uni Watch's Paul Lukas attended the unveiling of Nike's new uniforms for the 2012 NFL season and served as the informational conduit to the fans explaining what he saw as new differences as well as continued similarities to the past.  One of the features that received a significant amount of publicity was the new Nike Vapor cleats - each adorned in 2 or 3 team colors splashed generously about the footwear. Not only are the Vapors colorful but the colors are distributed in an unorthodox fashion. Insteps are one color while the the outside of the foot is another. 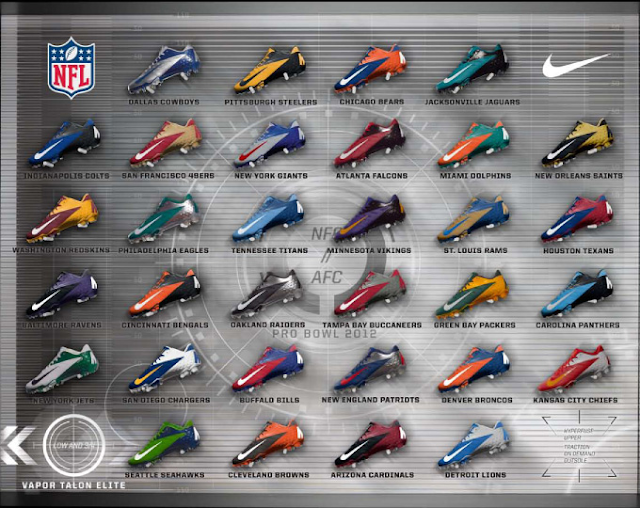 Last summer while creating the initial fabrications for each team's complete uniform, I put together a cleat template that would represent each team's version of the above designs.  However, we withheld adding these to the 2012 images because we were unsure how this new design would fly in the face of the League's strict "Base-White-or-Base-Black" cleat mandate. Just the previous year in 2011, Chicago's Earl Bennett received fines for continuing to wear plain orange cleats - an official Bear color - and was subsequently threatened by the League with penalties prior to kickoff and possible ejections from games if he continued to wear them.


We decided that the GUD would continue displaying team footwear as either black cleats or white until we saw how the season, itself, would pan out.  When "Opening Night" arrived, I broke out the microscope the next day to dissect the footwear. What I found was a graphic engineer's worst nightmare.

Our "Standard Operating Procedure" around here as always been "Go with the majority" along with our mantra of "Just get it right." This was rigorously applied to the 1970's when teams were slowly converting from black cleats to white. Once the majority of the players photographed were seen to have crossed over that line, that would become year in which we formally made the change on the yearly team images. The problem we were about to experience was ten times worse. Not only were the majority of players running completely contrary to the 'Base-White-or-Base-Black" edict, but no one specific brand (even Nike) or pattern of design was a clear majority. It was almost as if the players said "If they're going to let us wear team-colored cleats, I'm picking my own brand/style." Below are the two collages I made up  from "Opening Night" for my GUD colleagues to demonstrate the dilemma we faced.

If the teams simply could have had the majority wearing one particular design, we'd have been fine. However, the sheer number of footwear variations was trauma inducing.  We knew we could never depict every style of footwear for every uniform combination worn. That would be ludicrous to display. We decided to ride out the season with simple white or black and let the rest of the new uniform parts carry the weight of the season.

Now in the lull between seasons, with nothing to add as far as new designs for 2013 as yet, I turned introspective and again pondered this issue and its implications. The Vapor designs I molded for 2012, while authentic looking, do not represent a majority of the looks each team put forth. However the conundrum created by the majority of players wearing 'colored' cleats, as opposed to black/white, need to be addressed. If this trend continued, and there has been no reason to expect that it wouldn't, how many seasons would have to go by before we, at GUD, said "You know, all of the players are wearing colored cleats now. We really should have made that change back in 2012 so we wouldn't have to go back and change x number of seasons for consistency's sake."

I began perusing the galleries of photos from the past season on NFL.com. and charted, to the best of my abilities, what the most common color schemes and placement of those colors were. Rather than going with a particular style/brand of design, I decided that the colors should be the focus since we were channeling away from white and black.

Each team would receive one version of two or three colors mixed in a consistent fashion. The only exceptions for receiving an additional pair would be those teams utilizing an alternate or throwback uniform combination in which the color schemes were greatly changed as with Tampa Bay (creamcicle) and Washington (burgundy throwbacks) this past year. Some teams, like New England (red) and San Diego (powder blue), used alternate uniforms of a different color from their standards but yet did not pass this on to their footwear. The majority of players on those teams used the same cleats as during the other 14 or 15 weeks of the season.


While these schemes currently represent those seen by a majority of each team's players, it's my hope that the pattern will not change dramatically for the coming seasons. The idea is to show the colors being used, not any one specific pattern, since no one specific pattern is in use, even the mighty Vapor.

I believe that this alteration to last season's images helps to more accurately depict the product we see on the field. After all, the NFL is not simply Black-and-White. It has shades of grey...and navy...and midnight green...and battle red...and...