14) Colts-Texans: IND in white/white, HOU in navy/white. Sure, the Colts in all white is laden with tradition. But still, it is rather dull. The Texans do help pump this one up a bit with the navv and the bright red trim. Not enough though, to keep this one from the lower shelf. 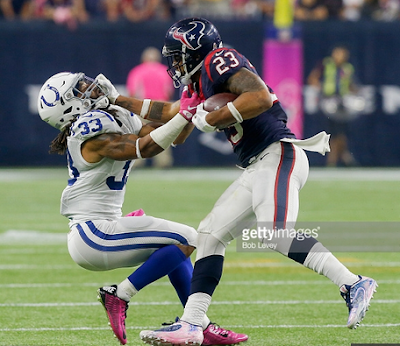 13) Patriots-Cowboys: NE in navy/silver, DAL in white/mint. Two squads with big followings and rather good uniforms, but paired together, this becomes a rather pedestrian looking matchup. Dominated by silvers and various shades of blue, with a pinch of red on the Patriots and I just find it a little on the dull side, color-wise. 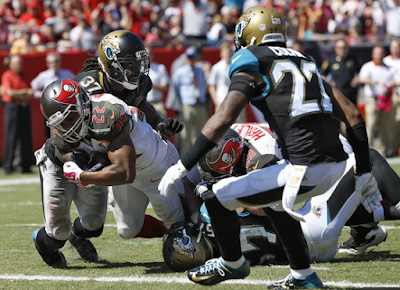 11) Broncos-Raiders: DEN in white/white, OAK in black/silver. We've seen this matchup in Oakland for the better part of 19 years now, and I'm just not caught up on it. Yeah, I'll say that the colors are a bit strong, navy, black, silver and a bit of orange, but I suppose it's the way it's executed that is what bothers me.

10) Bills-Titans: BUF in blue/white, TEN in white/navy. Apart from the white helmets, various shades of blue dominate here. The sweet Bills blue, the Titans navy and homage to their Houston days, columbia blue. Add a slight dash of red on both sides, and it just doesn't captivate me. May the Bills in blue pants might have given this duel a needed juice jolt.

9) Browns-Ravens: CLE in white/brown, BAL in alternate black/black. The Browns actually look sharp for once. The remodeled brown pants are so much better than the drab 100% brown trousers worn previously. But the Ravens decide to junk it up a bit with the all black ensemble. The only good thing about the black jerseys is that somehow, they give the purple a special oomph as a trim color.

8) Cardinals-Lions: ARI in white/white, DET in honolulu blue/silver. Nice colors at play here. Deep red, that magical honolulu shade of azure, and the dallop of silver. Good, not great. Personally I would have preferred the Cardinals in red pants. 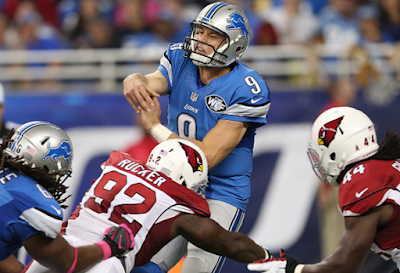 7) Saints-Eagles: NO in white/black, PHI in green/white. There seemed to be a better than average lineup of pretty good uni matchups this week, and due to that, this one seems to get lost in the shuffle.The Saints in gold pants might have been a little wee bit better, but I kinda think that would have been a wash. The Eagles look smart in the green over white look..

6) Bears-Chiefs: CHI in white/navy, KC in red/white. This pits two rather conservative teams in rather good gear. Red, navy and white are dominant with some speckles of yellow and orange to compliment. Not  flashy matchup, but a good, clean one. And that's certainly not a bad thing.

5) 49ers-Giants: SF in white/gold, NYG in blue/gray. I like this one. I like the fact that though the Giants look great in a blue over white uni, I think against the Niners, the gray pants look a lot better. Not sure why I feel that way. It just fits more comfortably against SF in all that gold and bright red trim.

4) Seahawks-Bengals: SEA in white/navy, CIN in black/white. The Seahawks, I believe, do well with the navy pants in this one. Gray pants may have worked just as well, but the white pants definitely would not have. The Bengals also score some points by staying away from all black. The result is a pretty good look.

3) Steelers-Chargers: PIT in white/yellow, SD in navy/white. Seems like when the Steelers have been in San D in recent years, the Chargers have taken to wearing the lordly powder blues. This time, the Chargers stuck with the navys, and for whatever reason, they look better going against the white clad Steelers than the powders. I know that's heresy amongst the uni-geeks, but this one just has a better football feel than had the Bolts strayed to powder. Bounces better off the black and yellow? May bee. 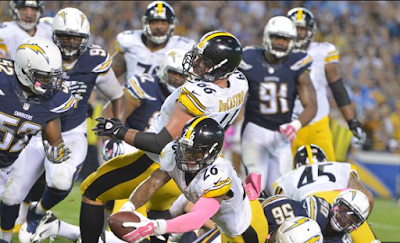 2) Rams-Packers: STL in white/navy, GB in green/yellow. I think this was the best choice for the Rams, navy pants instead of all white and it blends quite well with the Packers in the always sweet green over yellow. I quite like this matchup. 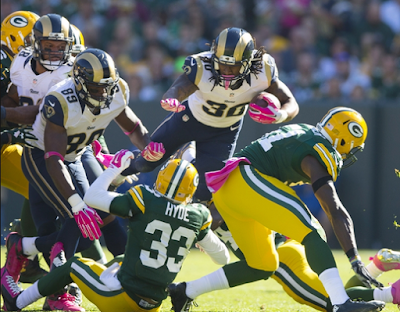 1) Redskins-Falcons: WSH in white/yellow, ATL in red/white. Oh yes, BOTH teams in tri-colors! The Redskins in burgundy lids, white shirts and yellow pants. The Falcons in black headgear, red jerseys and white pants. A real festive cornucopia of autumn bliss. 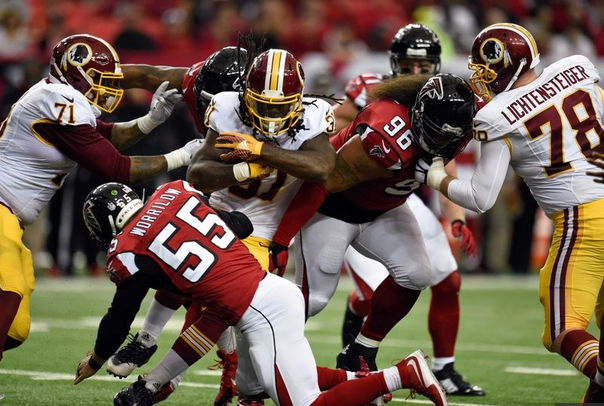 Thanks for watching. Be back next week!
2 comments