14) Dolphins-Patriots: MIA in white/white, NE in navy/silver. (Sigh). Again the Dolphins in the all whites. Patriots in the standard navy over silver. This might have been a good one for the color vs color rumors that have been going around. But, we get this. And we're all the poorer because of it. 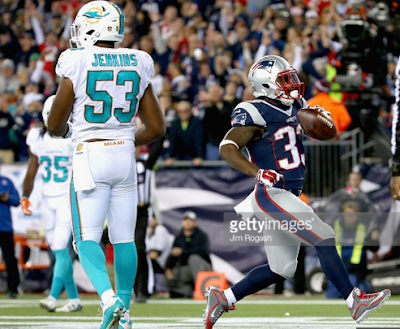 13) Colts-Panthers: IND in white/white, CAR in black/silver. Nope, this one doesn't work for me. Another opportunity for the Panthers to try the all-black with carolina blue socks in prime time is wasted. Again, the Colts in all whites just doesn't move me much. Sorry, folks. Let's move along.

12) Lions-Chiefs: DET in white/silver, KC in red/white. The third of the three London clashes this season. One this that we don't have to deal with this season is the tepid "International Series" patches that the NFL used to make these teams wear. Anyway this is not a half bad uni matchup, with red, yellow, silver and some honolulu blue thrown into the mix.

11) Buccaneers-Falcons: TB in white/white, ATL in red/white. The Falcons in the favorable red over white combo against the Bucs in the favorable all whites. Not a matchup with great gusto, but it is a pleasing one to the eyes, with the Bucs' dank pewter pants kept in the laundry room. Falcons' red tops making this a good look.

10) Cardinals-Browns: ARI in white/white, CLE in alternate orange/white. Well, the Browns waited till now to foist the third jersey in their collection, the orange. And this is how it should be done. Instead of garish brown numbers, we get legible white numbers with a slight brown drop shadow. Sorta disappointed that the Browns eschewed the orange pants with this, or the "deer hunter" look. Cardinals play it cool by staying all white.

9) Giants-Saints: NYG in white/gray, NO in black/gold. The Saints are back to wearing black at home, and it's the right choice for this one. I prefer this matchup to the Giants in blue and the Saints in white. It exposes the red trim of the Giants more than the blue outfit would have and the Saints in gold pants work better than an all black ensemble. 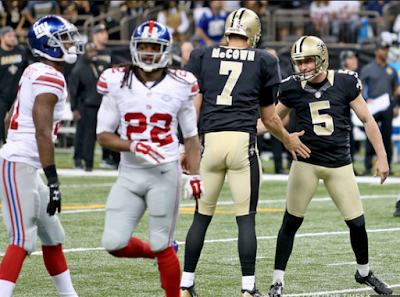 8) Titans-Texans: TEN in white/columbia blue, HOU in navy/navy. Just when we thought the columbia blue was being mothballed by the Titans, along comes the light blue pants! And paired up with the Texans in all navy, it's a welcome sight. All sorts of shades of blue and they blend well together. Bravo! 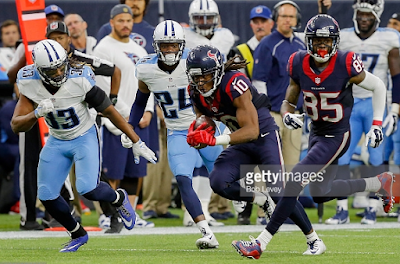 7) Seahawks-Cowboys: SEA in navy/navy, DAL in white/mint. Just close your eyes and imagine something amazing. The Seahawks in white playing the Cowboys in blue. But with Seattle never wearing white at home and Dallas virtually never wearing blue at home, the likelihood of this happening in our lifetimes, is virtually nil. But hey, I kinda like this anyway. the contrast is familiar, but actually appealing. So, keep dreaming.

6) 49ers-Rams: SF in white/gold, STL in throwback blue/yellow. This game somewhat reminds me of the clashes these two had for a number of years in the 70's, 80's and 90's. The bright Niner reds, golds and the royal blue and yellow of the classic Rams unis. Good to see this again!

5) Bengals-Steelers: CIN in white/white, PIT in throwback yellow-black/khaki. Yep, the Steelers have these more often than when they were originally worn over 80 years ago! I make no secret of the fact that I adore the "prison stripes," "bumblebees" or whatever you want to call them. And the striped socks that go with them! What brings this one down a peg or two was the Bengals going with white pants instead of black. Black slacks would have been the perfect antidote against the Steelers marvels. But not to be and the bland (for the) Bengals drops this down. 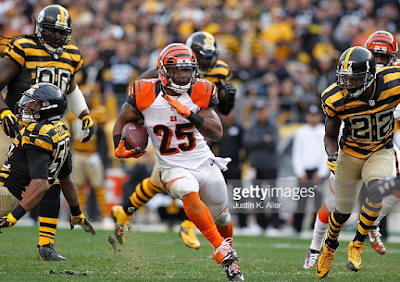 4) Jets-Raiders: NYJ in white/green, OAK in black/silver. Quite amazing what a pair of pants can do. If the Jets were in all white, I would have said, yucky. But, switch the pants to green and I say, brilliant!! If you just have one non-white color in your wardrobe like the Jets, you gotta make the most of it. And coupled with the standard Raider silver and black, it's great.

3) Packers-Broncos: GB in white/yellow, DEN in alternate navy/white. Wow, we haven't seen the Broncos in navy over white since the 2011 Wild Card game! And this is pretty much the same uni matchup of Super Bowl XXXII. And it's a nice clean look from both sides. And some good color works; navy, green, orange and yellow. While I prefer the Broncos in orange, a rain check here will suffice. 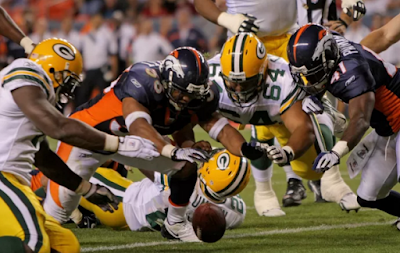 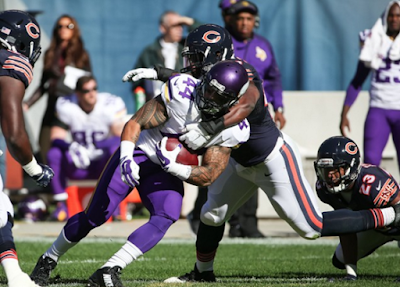 1) Chargers-Ravens: SD in white/navy, BAL in purple/white. I'm not sure why, but this is appealing to me. The Ravens purple seems to really blend well with the Chargers in the white over navy. Certainly better than all black or purple over black. This is one in the upper division of this week's food chain for sure. 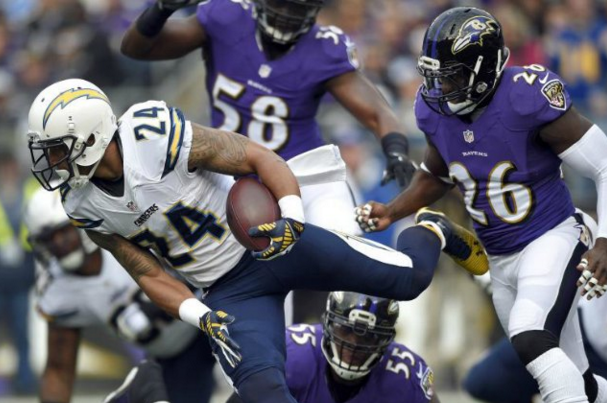 Be back here for Week 9 as we hit the halfway mark (already??!) of the season!
6 comments

An Update Update...and That's No Double-Talk!

This past weekend, with the exception of a little bit of housekeeping in the Pro Bowl section of GUD, everything from 1960 forward has been updated to sharper graphics, authentic patches, more consistent and accurate texts, and every possible 'preseason only' combo that we've been able to locate since 1951.

I couldn't be more proud of my teammates - Rob (getting everything installed), Tim (research), and Larry (research and proofing of updates).  Thanks for the help guys!

If you detect something that isn't working right or doesn't look right, let us know. We're probably talking about a million lines of code with all of these updates over the last few months.

But don't think that we are now going to be taking a break. With 'Color Rush' starting in a few weeks, we have new uniform combos to design and include. There are also a few other modifications and upgrades we've stumbled upon during this latest round of updates that we want to make happen.

Have fun exploring and if you'd like to peruse the list of updates, don't forget to check out the "Updates" tab on the Home page.  It's really quite a read.