Week 2 brings us some throwbacks, and some monochromes, with a pleasant surprise.  Here we go.

16) Dolphins-Colts:  MIA in white/white, IND in blue/white.  Meh.  Dolphins need to get the aqua pants paired with the white jerseys ASAP.  Colts with the nice blue jerseys.  Just way too much white, helmets, pants, and little trim on either team. 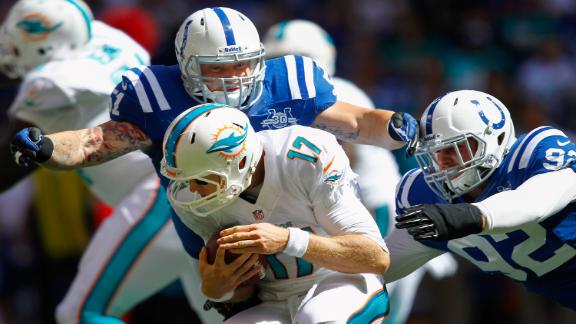 15) Jets-Patriots:  NYJ in white/white, NE in navy/silver.  Jets for the second straight week go head to toe in white, which doesn't do it for me.  Patriots in standard navy jerseys/silver pants.  The Pats have to carry the color load here, with the Jets only offering of color being green trim.  Hopefully, it will be a little better later for the return leg.

14) Saints-Buccaneers:  NO in black/gold, TB in white/pewter.  Just wish this game could have been played later in the season, by which time the Bucs would have gone from white to red togs.  But alas, not to be and there's just a bit much metal with the helmets and pants in those hues.  With Saints black and only bit of red trim on the Bucs, and this one becomes B level.

13) Browns-Ravens:  CLE in white/white, BAL in purple/white.  Ravens, in a mild surprise, go with the purples instead of the whites for the home opener.  Browns in the familiar all whites.  Nice colors, actually.  Good off-beat mix of brown, orange, purple, gold, and of course, black.

12) Redskins-Packers:  WSH in white/yellow, GB in green/yellow.  Never thought I'd say this, but there is too much yellow here.  Even if the Redskins had dropped their burgundy pants, they definitely could have used them here.  So while some games move up the ladder with some wise moves, this one moves down a few pegs, no fault of the Packers, by the way.  Their green jerseys are almost bullet-proof.

11) Jaguars-Raiders:  JAX in white/white, OAK in black/silver.  Jags continue in the futuristic look against a team as rock-ribbed in steadfastness in the Raiders.  All that Oakland silver trim played well off the off-beat Jags lid and their teal, gold and black trimmed whites.  Oddly intriguing.

10) Rams-Falcons:  STL in white/navy, ATL in red/white.  Rams stay right with the deep blue pants as opposed to their white trousers and it bounces off well from the Falcons brilliant red jerseys.  Gold and black add instead of detract to the mix.

9) Steelers-Bengals:  PIT in white/yellow, CIN in black/black.  Bengals one of four teams in colorchromes this week.  We've seen this matchup before, and while it makes for a load of black, there's just enough orange and yellow to keep it from a blackOUT.  One thing would have sparked this matchup, and that would have seen the Bengals rock the orange socks as they did last week.

8) Titans-Texans:  TEN in columbia blue/columbia blue, HOU in white/white.  For the last seven out of eight years, the Texans open their home schedule with an all white combo.  The Titans reply by wearing all light blue, a combo they haven't worn since Week 5 of 2009.  The uniqueness of this matchup will ratchet this game up a few rungs.  Also, because it's rather a good one.

7) Broncos-Giants:  DEN in white/white, NYG in blue/gray.  The Manning Bowl gave us the blues; Bronco blue and Giant blue, with a taste of red, orange and gray.  Really though, I find it appealing.

6) Chargers-Eagles:  SD in navy/white, PHI in white/green.  By the mere fact that the Eagles busted out the green pants instead of the whites, this matchup moved up a little in the food chain.  Chargers gave their navy jerseys a touch of spark with the NOB's (names on back) being in yellow with a powder blue outline.  A blue vs. green with a touch of yellow, black, powder, gray.

5) Lions-Cardinals:  DET in white/silver, ARZ in red/white.  Not much flash in this matchup and perhaps under the radar due to the rather so-so nature of the teams, but I happen to think this is a pretty well pairing.  The pale shade of Lions blue, the silver accessory, the scarlet of the Cardinals, and not an overt amount of black, I'm feelin' it.

4) Panthers-Bills:  CAR in black/silver, BUF in throwback white/white.  Very rare to see Panthers in the black and silver so early in the season.  Usually the Panthers are in the whites or the carolina blues early on.  But they go with this gear at Orchard Park as the home Bills rock the AFL throwbacks.  It (the Bills' unis) is refreshing, if a bit too white for my taste.


3) 49ers-Seahawks:  SF in white/gold, SEA in navy/navy.  Seahawks in their second year of the all navys trimmed in Nike hubris and what pops for me? The Niners red numbers!  Why that is is a mystery, but that Seahawk uni seems to bring that red to life for me.  Not knocking the Hawks look, because I think that mess of colors works.

2) Vikings-Bears:  MIN in white/purple, CHI in throwback navy/white.  Boom-o. Great colors that pop.  Those straight orange numbers/names/stripes on the navy 40's throwbacks of the Bears, and the second straight week of purple pants with yellow and white done right and this is a dandy sweet matchup.

1) Cowboys-Chiefs:  DAL in white/mint, KC in red/red.  WHAT???? RED over RED?!?!?!  It's true!  The Chiefs have had red jerseys and red pants in their wardrobe for the better part of 45 years, but only until now have they decided to pair them up together.  And boy, did it work for me! So as not to overkill on the red, KC wore their white socks. Oh yeah, Cowboys in standard white and mint. 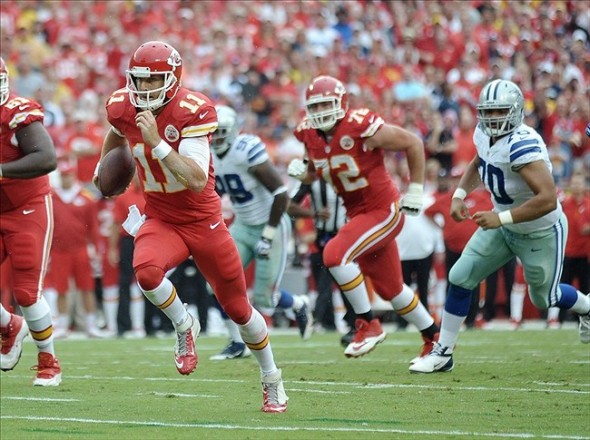 Will we see a shock to the system in Week 3, like we did in Week 2?  Tune in next week and find out!  See ya then.