We hope you enjoyed pro football's longest weekend. And all that went with it.

Time for another installment of the GUD's rankings.

16) Dolphins-Jets: MIA in white/white, NYJ in green/white. Gack! If I were a cat, I think I'd hurl a hairball. Just a weak looking game. Normally for a prime time matchup, at least one side will crack open the dark pants, if available. Here, both squads had that option and both decided to go...white?? So, instead of giving green, aqua and orange the chance to shine, never mind. Gack! 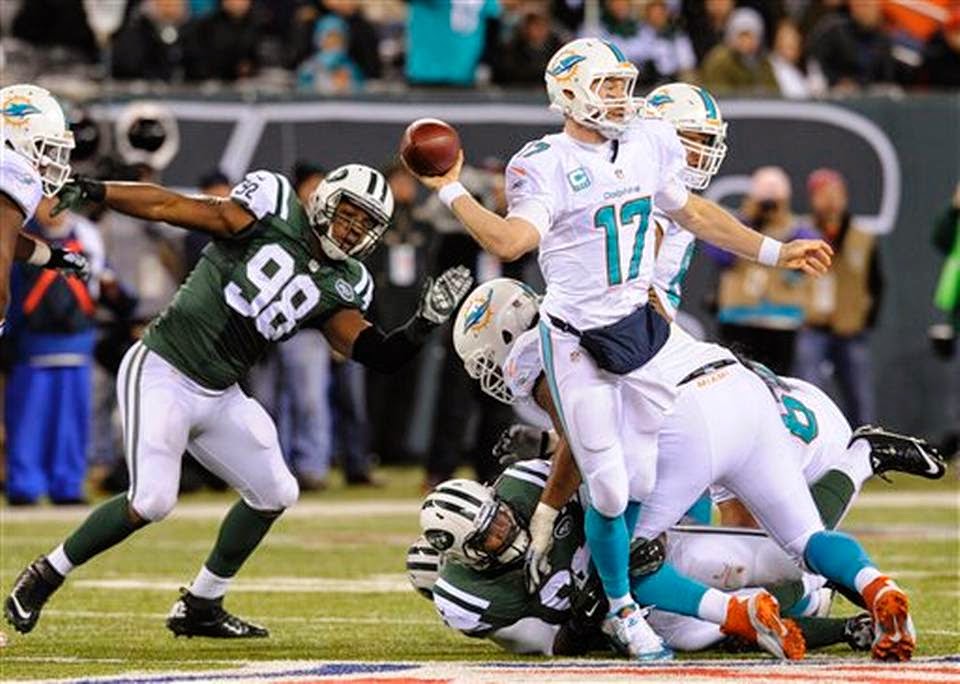 15) Raiders-Rams: OAK in white/silver, STL in navy/white. Not sure what you could do with this one. I'm not feeling any sort of way about this one at all. The dour white-jerseyed Raider look paired with the gold trimmed Rams navys in white pants. This is where bright yellow from the Rams would have given this matchup a much needed kick in the butt.

14) Titans-Texans: TEN in white/navy, HOU in navy/navy. When three of the four major components in a matchup are the same color, be it white, black, red, navy, it's a major drop down. Such is the case here. Too bad the Titans have sworn off columbia blue for the season, as it would have given this game a desparate push upwards. Too bad the Texans chose this game to go all navy, against a navy clad team. Bad choices on both sides. Shame.

13) Cardinals-Falcons: ARZ in white/white, ATL in red/white. See #16 and #14. Three of four components in white. With a limited amount of color options, you go with your game hand, Namely, the Cardinals could have pulled the red pants. Would have a big difference. Alas...

12) Panthers-Vikings: CAR in white/white. MIN in purple/white. A heckuva lot of white here and thus, a bit of a tumble in the rankings. Not sure about all purple, but with the black pants available for the Panthers, why not give it a try? As we've seen before, black makes the light blue on the Panthers explode with vibrancy. Still, a good array of purples, yellow, carolina blues, blacks and silver.

11) Seahawks-49ers: SEA in gray/gray, SF in red/gold. Normally I'd have this one up several notches, but one thing was quite troubling to me. Whether it was my failing eyesight, the flaws of HD television, the lighting at Levi's Stadium or whatever, it looked to me that the Seahawks were wearing all white for the longest time! It wasn't until I looked at photos on the gettyimages.com website that I could fully confirm the Seahawks were indeed in "wolf" gray! Paired with the always dependable Niners red over gold, the matchup stays above water, but gets docked at a few notches for the Seahawks gray not being gray enough for a night game.

10) Chargers-Ravens: SD in white/navy, BAL in purple/white. Another one of those "the best we have to offer" games that still just can't get up the charts. It's really not that bad, no eyesore. Good deeply dark colors of black, purple and navy, blended with a touch of powder blue, yellow and gold.

9) Bears-Lions: CHI in white/navy, DET in honolulu blue/silver. Traditional matchup on a traditional football day. And it looks grand. The blue mixture of navy and honolulu blended with silver, orange and a breath of black is always a pleasure to the eyes. 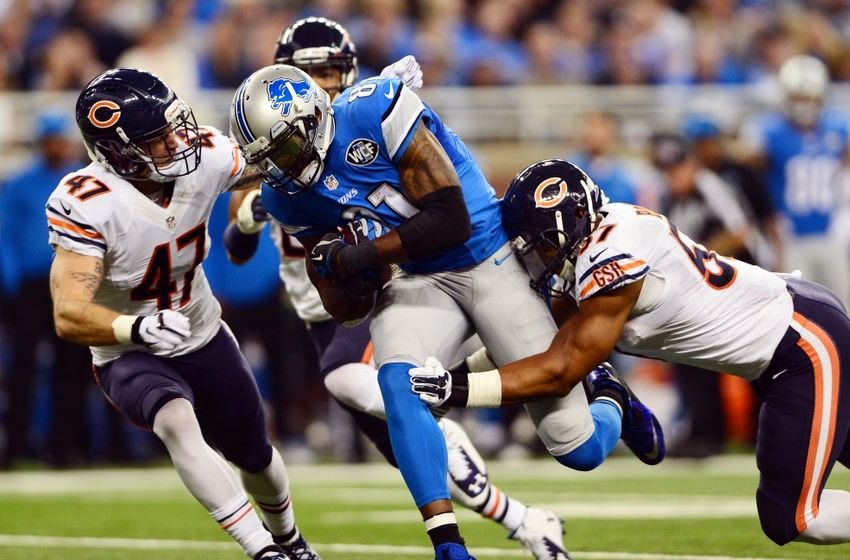 8) Bengals-Buccaneers: CIN in white/white, TB in red/pewter. A couple of really busy uniforms here. Bucs do right in rocking pewter pants, but the Bengals could have either: a) wore the Black pants to make the orange socks pop a bit, or b) wore black socks to temper the orange/red overload.

7) Saints-Steelers: NO in white/black, PIT in black/yellow. This game featured a special one-off patch worn by the Steelers to commemorate the team's first championship, their Super Bowl IX victory some 40 years ago. Otherwise, this was a good matchup, nothing spectacular. Both teams in black, yellow and gold. So, though not much variety, they brought their best for this one.
6) Eagles-Cowboys: PHI in white/green, DAL in navy/silver. It is very good that the Cowboys have decided to wear normal blue at home for at least one game a year. This is a real eye pleaser as the Eagles wore their green pants. The Cowboys dark jersey combo is really too good to be seen so rarely. Maybe more of this at AT&T Stadium next year, guys?? Pretty please?

5) Broncos-Chiefs: DEN in white/white, KC in red/red. The Chiefs honor a stricken player by wearing his favorite combo, the lovely all reds. But up against the dour broncos all whites, and a rather strong uni matchup week, it just can't scale the heights.

4) Redskins-Colts: WSH in white/yellow, IND in blue/white. The Redskins white combo may be the best white uniform there is right now, because it's a rare case where this combo is the one that actually makes the opponents' dark colors work, rather than the other way around. And with the stark Colts look, the Skins really makes the Colts blues stand out way more than normal.

3) Browns-Bills: CLE in white/brown, BUF in blue/white. The Bills were able to play a home game at home for a change and the home fans were treated to a very nice uni matchup. Quite colorful with brown, perfect blue, red, orange and white in a beautiful blend of color. Well played. 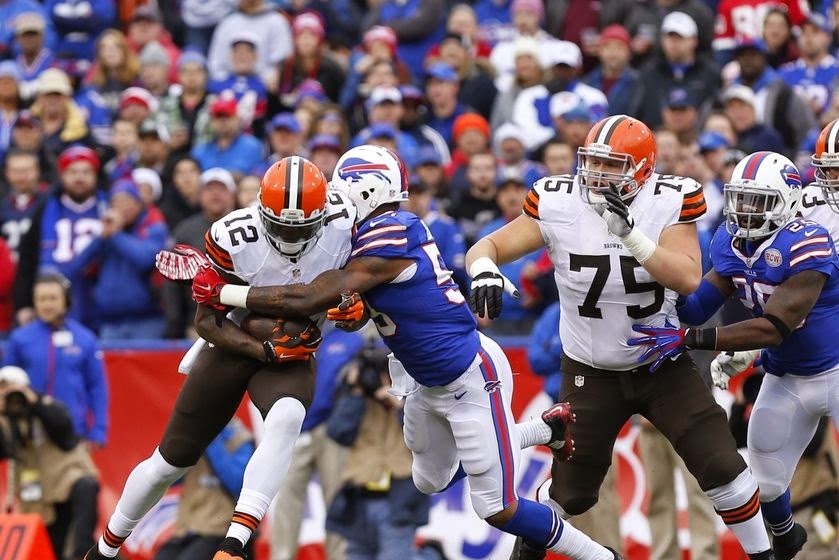 2) Patriots-Packers: NE in white/navy, GB in green/yellow. Power packed matchup both on the field and on the uniforms. The Patriots have a fair/middlin' uni here, but paired up with the very strong Packers green over yellow get-up and it comes to life as a strong bold uniform. Everything bounces off really well. 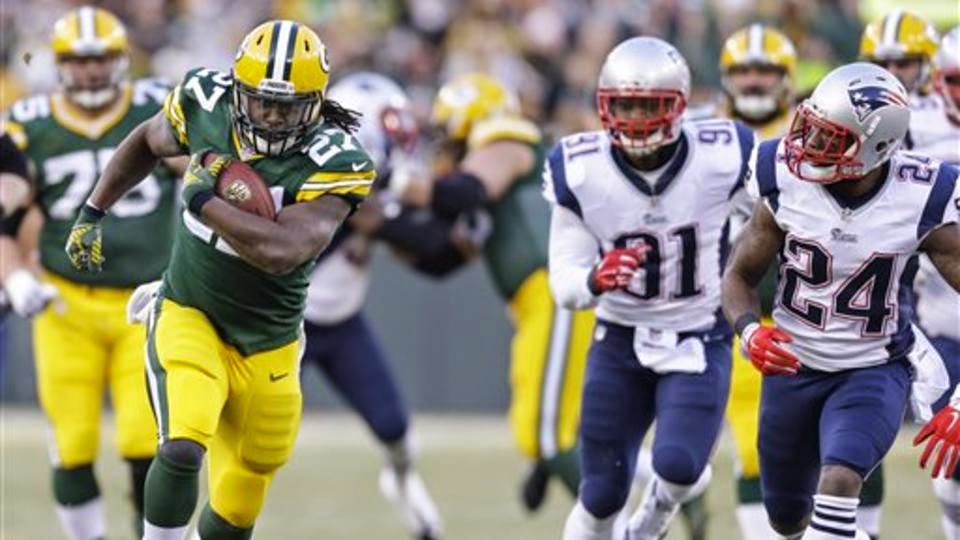 1) Giants-Jaguars: NYG in white/gray, JAX in black/black. This is wild. The matchup almost makes no sense at all. A team with a look stuck in early 1960's America against a team maybe too futuristic for its own good. Put 'em together and it's magic! Stodgy red, blue, gray meets gold, matte black and teal trim. Sweet and sour, salt and sugar, or as the Brits say, chalk and cheese. Yep, I like it! 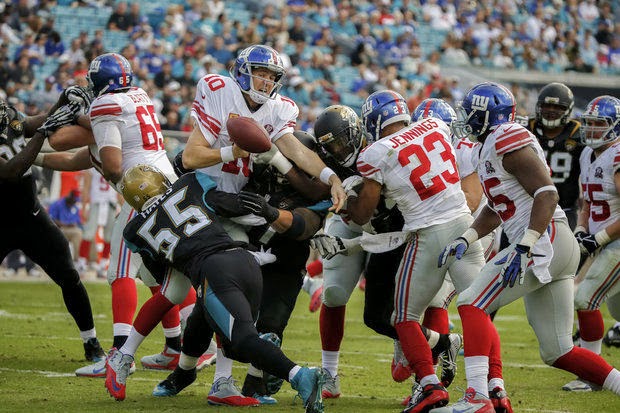 That's it for this week. Again, a kindly reminder to check our Facebook and Twitter pages daily to see our random uniform matchup from the past, with little trivia items sprinkled in.

Take care and see you next week!