And as we continue to delve deeper into the season, we have 15 more matchups to review.

15) Jaguars-Titans: JAX in black/black, TEN in white/navy. Overdose of darkness here. Had either team gone with their version of light blue, either not both, like the Jags in teal tops or the Titans in columbia bottoms, I could send this matchup soaring. 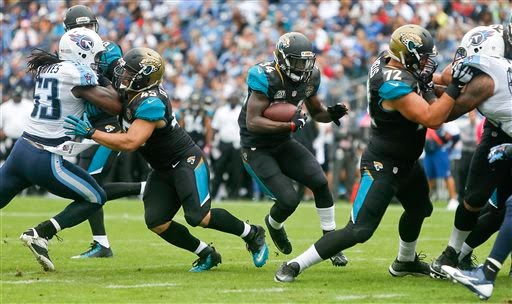 14) Broncos-Jets: DEN in white/white, NYJ in green/white. I like the helmets in this matchup. Not so much the rest. Broncos with navy dominant, with the Jets in green and white. Orange is a mere bystander here.

13) Colts-Texans: IND in white/white, HOU in navy/white. This could have been made a little more palatable with the Texans going whole navy, especially for a prime time game, but they stayed straight with the white pants. It cost this matchup a few notches.

12) Packers-Dolphins: GB in green/yellow, MIA in white/white. Green and aqua are a little close on the color scale. But boy, there's all that Miami white again to kinda put the kibosh on this one. Yes, I do thirst for the aqua pants. Aqua and orange as trim just doesn't cut it. A heavier injection of aqua would have sent this matchup up the charts,

11) Chargers-Raiders: SD in white/navy, OAK in black/silver. Traditional AFC West matchup. The colors are not a really great mix, but they do work here when they are blended. Black, navy. silver, yellow and a breath of powder blue is a comforting selection.

10) Giants-Eagles: NYG in white/gray, PHI in black/black. Strange one, this. For the first time in 73 years, the Eagles rock black pants. Back then, the Eagles were having a bit of an identity crisis. Tonight, it's because, well, they are still waiting for proper green jerseys and pants. The Giants, at least, go normal with white over gray and the mainly red trim. I put this one in the middle of the pack, because, well...anyway, here's the Eagles 1941 threads that I'm talking about:

9) Ravens-Buccaneers: BAL in purple/white, TB in white/white. The Ravens did the right thing here, and even better, so did the Bucs. Yeah, white at home (WAH) and all that, but the Bucs rocked a paor of orange socks for this one, instead of pewter. A little sparkle for the masses. Socks. So overlooked by many, but not us do-GUD'ers!

8) Bears-Falcons: CHI in white/navy, ATL in red/white. Another case of two good uniforms separately that don't mesh well together. I like these unis on their own, but for whatever reason, it's not coming to me here. Still, the colors are good, navy, black, red and orange. 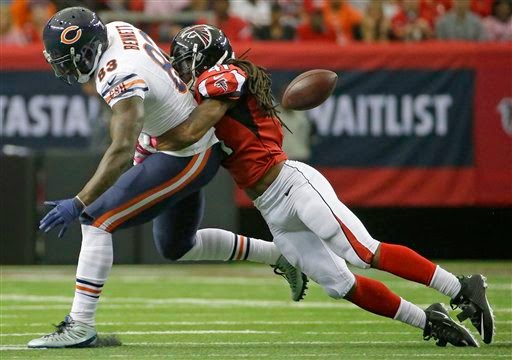 7) Patriots-Bills: NE in white/navy, BUF in blue/white. Red, white and blue and silver. Pretty standard fare for American sports. The trick is to pull off a good look with these colors. This game does that. Pats in the time tested silver/white/navy/silver and the Bills in white/blue/white/blue. Colors done well. Well done.

6) Cowboys-Seahawks: DAL in white/mint, SEA in navy/navy. Just thinkin'. Of all the possible normal uni matchups in the NFL, Cowboys in blue against Seahawks in white is the least likely to ever happen. The Cowboys nearly always wear white at home and the Seahawks have never worn white at home. Having said that, this is a pretty good matchup. I like how these two work together. The various shades of blue and the touch of gray and neon green  are a good blend.

5) Lions-Vikings: DET in white/silver, MIN in purple/white. Of the NFL's eight divisions, I must admit that the NFC North is my favorite when it comes to the unis. Case in point: silver, yellow, a hint of black, some magical honolulu blue and a dollop of purple. Add it up and it's a colorful display without garishness.

4) 49ers-Rams: SF in white/gold, STL in blue/yellow (throwback). The Rams go back to their early days in the Gateway city, with the dark blue lids with yellow horns, straight blue jerseys, yellow pants and blue socks. Doing this against the Niners is a good thing. A nice mix of yellow and gold, and blue and red. Better than the modern approach, for sure.

3) Redskins-Cardinals: WSH in white/yellow, ARZ in red/white. Why so high? I'll tell you why. The Redskins yellow pants just make this work. The reds and burgundys, the touch of black, are good enough, but those yellow pants! I guess it's a yearning for those old 1970's 'Skins-Big Red matchups from St. Louis that sends a jolt of nostalgia through my creaky bones. Way to go! 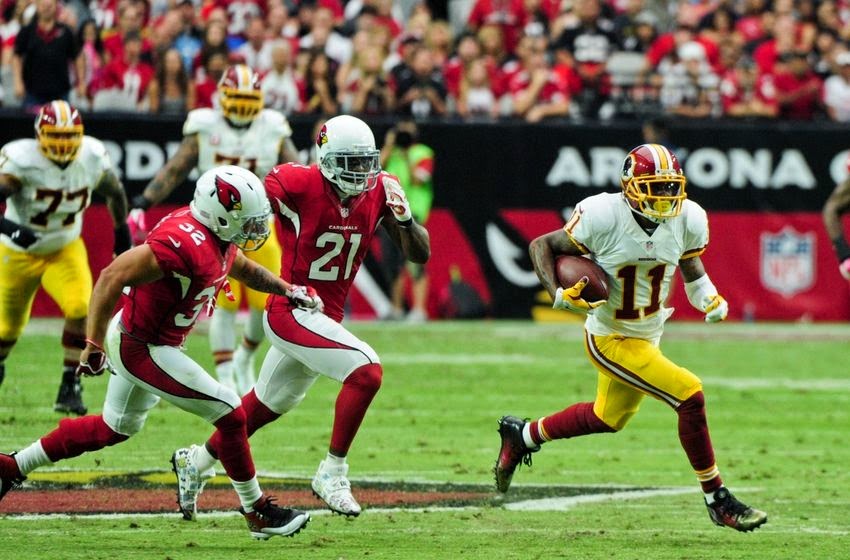 2) Panthers-Bengals: CAR in white/white, CIN in (alternate) orange/white. Tieing this one down, Panthers with the established all white look with carolina blue hose, and the Bengals strutting in orange jerseys and socks. Black is rightly reduced to a trim role for both sides in this matchup and let the colorways show the way. 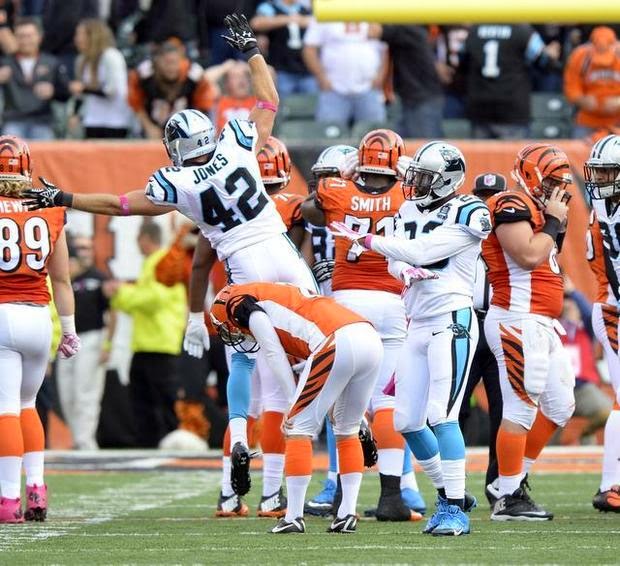 1) Steelers-Browns: PIT in white/yellow, CLE in brown/white. I have a fancy for team whose helmet, jersey and pant color all vary. When two teams do it in the same game? Bliss. You have black, brown, orange, yellow and white. Autumnal colors for the autumn game. How can you not go wrong here? 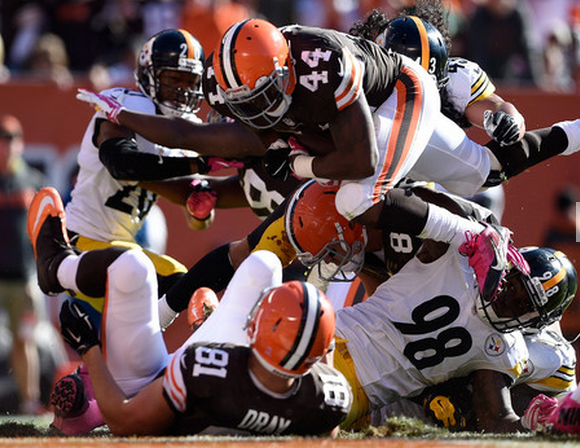 Before I close, don't forget to check out Bill's insightful blog, "The Butterfly Effect: How Things Transpire on the GUD." You can find it here. A really GUD read!

Take care, all, and we'll see you here next week.

The Butterfly Effect: How Things Transpire In The GUD

Over a year ago, I wrote a blog entry describing how high-top cleats were going to be added for all teams up through 1956. The changes needed made for accuracy's sake, but there was also an additional benefit to making the changes, as well.

It gave me a chance to replace many of the original images for 1920-56 created for the site over 5 years ago all in one foul swoop.

When I began and my skills had not become as polished as they are now, I would 'hollow-out' jerseys, pants, and socks and add in the colors required. As you notice below, especially on the borders between the sleeves and the ribs, some of the bordering was eliminated leaving 'sharp' edges between the border and the colored areas. 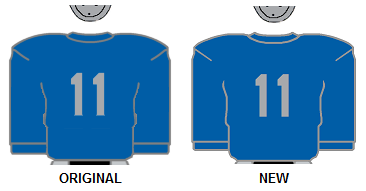 Having these rough edges eliminated when the high-tops were added was a fantastic fringe benefit of that overhaul.

However, the high-top era only went as far as 1956. For some of those older teams, parts of 1957-1959 were updated at the same time for consistency's sake.

A few months ago, one of our contributors, smith03, noticed that while we ended the high white sanitary socks around 1981 or 1982, he was able to document that those 'sannies' were worn in that style at least through the 1987 season.

I now had a chance to fix every teams' high-whites in the same manner that we have shown the trend coming back to the League the last few years.  This would also give me the same chance that the high-tops provided. I could now modernize everything from the end of the high-tops (1956) up through 1987. 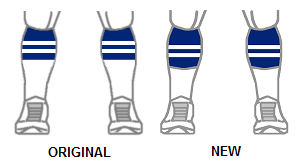 I set out to make the League-wide updates. However, events transpired along the way that forced me to broaden my scope from just 1957-1987.

Certain teams had some helmet issues. For example, the logo on the Packers' helmets seemed too large. It also seemed to sit too low on the side of the helmet. It needed fixed. That meant updating the entire Green Bay run up through 2011. So it was required, and so it was done - for all teams. The Bills, Bears, Cowboys, Jets, Raiders, Eagles, and 49ers have also already received improvements to some portion of this era's helmet logos during these updates. 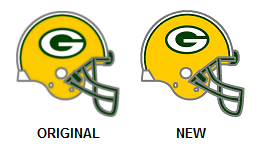 Since everything up through 2011 was now needing to be updated, I saw another opportunity to fix something else that had always bothered me. This was the original NFL shield placed on the 'V' of the jersey collars beginning in 1991 until it was replaced by the "NFL Equipment" logo in 2002. Pretty lousy, right? Not anymore.

And the same with the pants shields.

All of these improvements meant one thing. For consistency's sake, every team needed to be revised up to the 2012 season, be that from 1957-2011 or commencing with whenever the team began operations.

Over the next several months, with Rob's help, these refinements will start to appear both in the teams' yearly images and in the weekly match-up pages which track week-by-week uniform pairings for every season. We, at GUD, ask for your patience as, for a time, some of these changes will be apparent for some teams but not for others. In time, all teams will get updated completely in our continuing effort to "just get it right."