As the weather gets colder, the home teams, that early in the season frequent the white jerseys, now have by and large changed to the dark jerseys at home. Leaving just the usual suspects, the Cowboys and Dolphins as the least teams standing wearing the paleness for home games. For the most part...

Anyway, here's this past week's rankings.

13) Cowboys-Jaguars: DAL in white/mint, JAX in black/black. Nope. Jaguars in black over black is not a good combo (and this comes from someone who likes monochrome!) and especially against the Cowboys in white. The teal jerseys (which have yet to be worn at all this season) would have been ideal. Nope. Sorry, Brits. 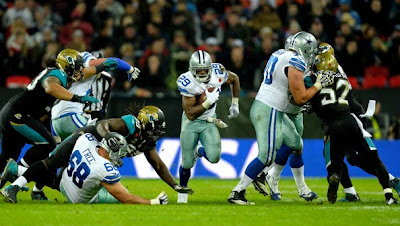 12) Broncos-Raiders: DEN in white/white, OAK in black/silver. Predictable matchup. Predictable reaction. Yawn. Really, I have seen worse, much worse, but maybe this one needs to be goosed in some fashion. When the Broncos whites are paired up against the Raiders standard, it just doesn't perk me up any.

11) Browns-Bengals: CLE in white/brown, CIN in black/black. Wow. Lots of darkness for the TNF affair. A little too much for my tastes. One of these teams should have rocked their white trousers. Preferably the Bengals, so we could a little touch of brightness.

10) Giants-Seahawks: NYG in white/gray, SEA in navy/navy. While I claim some boredom with this one, I must say the Giants red trim on their white jerseys hits the spot in a good way. It gives us some air from the blues and grays that otherwise prevail here. The dash of neon green trim from the Seahawks is a pleasurable boost.

9) Dolphins-Lions: MIA in white/white, DET in honolulu blue/silver. Hmm. I'm torn on this one. No problem with the Lions gear. But, should the Fins have gone white over aqua or not? I'm not fond of the all white Dolphins, but maybe the aqua pants would have detracted from the Lions sharp homes? When I'm in dispute with myself, I search for the middle of the pack placement.

8) 49ers-Saints: SF in white/gold, NO in black/black. This is the right uni matchup combo. Had the Saints rocked their gold pants here, it would have been gold overload. Still, that decision won't rocket this game to the top, but it certainly keeps it from the lower tier.

7) Titans-Ravens: TEN in white/navy, BAL in purple/black. Much darkness in this clash, but the colors vary, so it's no biggie from here. The Ravens bring out the purple over black combo for the first time this season. I really like the look, two shades of darkness. Maybe the Titans could have rocked their light blue pants...hm...maybe they should have, after all. 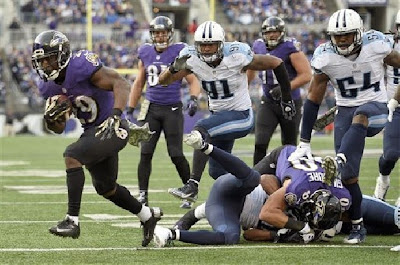 6) Falcons-Buccaneers: ATL in white/white, TB in red/pewter. The Bucs go back to the darks at home and it really looks good for this one. Not usually a fan of the Falcons white over white, but in partnership with the Bucs in bright red over dank pewter, This matchup works just fine.

5) Steelers-Jets: PIT in white/yellow, NYJ in green/white. Mildly surprised that the Jets didn't go green-green here, but in any event, this is a solid matchup. The green gives a nice contrast to the black and yellow and road whites of the Steelers.

4) Panthers-Eagles: CAR in white/white, PHI in green/white. Finally. The Eagles in green. And it looks great. The jersey seems to have lost a little of its sheen, and actually that's a good thing. Paired up with the Panthers whites, where the best thing about that uni is the electric blue socks, and it is a good night in Philly. Welcome back, green. We missed ya.

3) Rams-Cardinals: STL in white/navy, ARZ in red/white. Again, the Rams choice of navy pants is a major boost. Navy helmet/white helmet, white jersey (with an abundance of trim)/red jersey, navy pants/white pants. And while the socks don't offer as stark a contrast as the other features, it does work nicely. Good one! 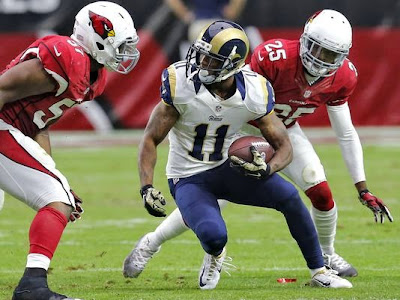 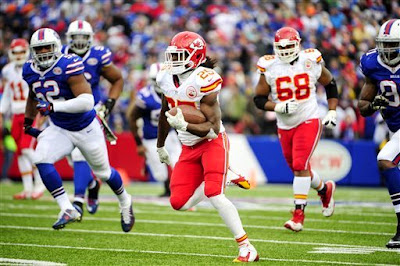 1) Bears-Packers: CHI in white/navy, GB in green/yellow. My favorite uni matchup in the NFL. Yes, predictable, yes standard, yes to all of that. But this has everything I want and need. Dark pants, yellow helmets, lush green, trim colors that are done right and add perfectly to the basics. Nothing flashy, just good, honest, basic uniforms. Just wish the game was as close as the uniforms. INXS once said it best, "Don't Change a Thing!" 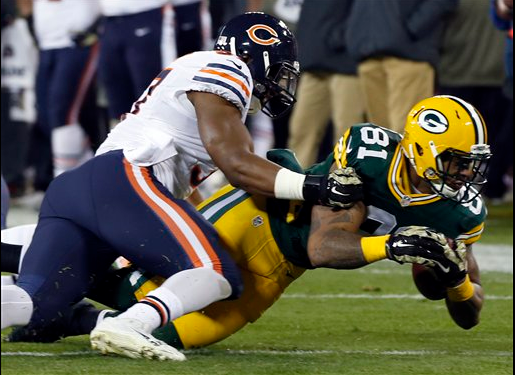