As the weeks of the season begin to gather speed, we shall do likewise with this past week's uniform game rankings.

Note that we have entered "Breast Cancer Awareness Month." We at the GUD wholeheartedly support the cause, but the uniform rankings reflect only the team colors and not the pink accessories. We trust you understand.

15) Rams-Eagles: STL in navy/navy, PHI in white/white. OK, we need to get the Eagles green in here ASAP! It would have helped a lot in this matchup, either as a jersey color or as the pants color. Instead, we have to deal with the starkness of all navy against all white. At least the Birds' helmets maintain a green look. 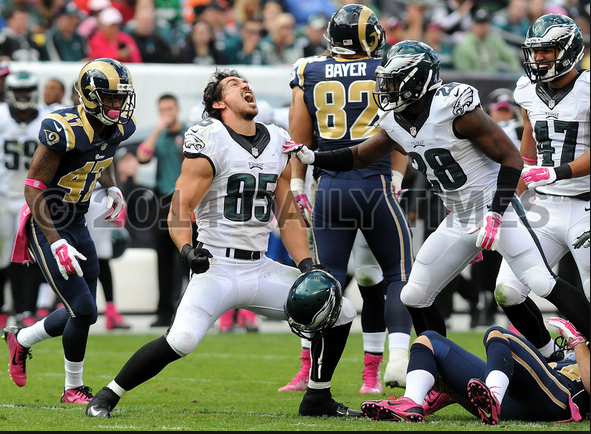 14) Jets-Chargers: NYJ in white/white, SD in navy/white. Muph. I like the Chargers navy over white combo. Of course, not nearly like I like powder over white, but still...And then when the Jets come into town with the white all over look and I lose my appetite.

13) Ravens-Colts: BAL in white/black, IND in blue/white. Good for the Ravens to choose black pants instead of white, it does bolster this matchup some. Colts blue jerseys blend well against that Raven black and purple.

12) Steelers-Jaguars: PIT in black/yellow, JAX in white/black. Why so low? I really can't explain. A lot of black to be sure, yellow and gold, too. Maybe...not enough teal? The teal does stand out, but not enough as it's just a trim color, but I think it would have worked as a jersey color for the Jags and it would have made the Steelers yellow pop more in white than in black. Alas, we'll never know.

11) Seahawks-Redskins: SEA in white/white, WSH in burgundy/yellow. Rather odd for a team with a choice of three pant colors for a prime time game goes with all white? Against a smartly clad Redskins squad in burgundy over yellow. Yes, disappointing, but the trim colors of navy & neon green helps to keep this matchup from the basement.

10) Falcons-Giants: ATL in white/white, NYG in blue/gray. Suppose, just suppose, the Falcons had a set of red pants and decided to don them here? WOW. But reality can be harsh. Still, reds as a trim to Falcon black and Giant blue and gray is really not that bad. Not that good, either.

9) Cardinals-Broncos: ARZ in white/white, DEN in orange/white. Really, two combos that are pretty decent on their own, but put together, they create for me a large meh. Thinking red pants for the Cardinals would have helped some, but they won't be seen likely till mid-November. Are the Broncos' orange wearing thin with me? Hope not.

8) Bengals-Patriots: CIN in white/white, NE in navy/silver. The Bengals all whites are surprisingly nice with the orange helmets and the orange socks. Orange and black tiger stripes do wonders for an all white ensemble. Couple this with a pleasant navy over silver Patriots look and this matchup looks better than expected. 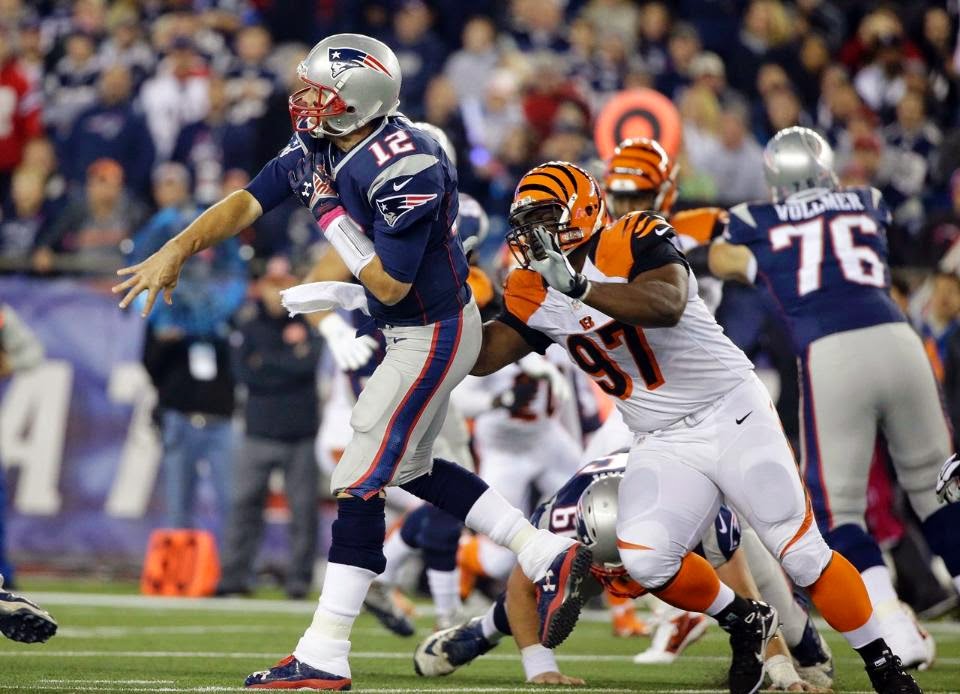 7) Bears-Panthers: CHI in navy/white, CAR in white/white. This is actually not as bad as originally thought. There's navy and black with shades of orange, carolina blue and silver mixed in. Not a broad spectrum of colors, but they work here.

6) Vikings-Packers: MIN in white/purple, GB in green/yellow. With yet another Thursday Night Blowout, this uni matchup cuts through that mess into something close. The Vikes wear purple pants and that is a visual blessing. Yellow, blended with Packer green and Viking purple means success, uni-wise.

5) Texans-Cowboys: HOU in navy/white, DAL in white/mint. All Texas. All right. This is a match up meant to be. Cowboys in the uni that is meant to be against the Texans in their Sunday best. Hard to beat.

4) Buccaneers-Saints: TB in red/pewter, NO in white/black. All that jazz on the Bucs and all that black, white and gold on the Saints, and I admit to this matchup tickling me giddy. Red, orange, pewter, black, gold. Really a dandy pairing from these eyes.

3) Chiefs-49ers: KC in white/red, SF in red/gold. A load of apple red here, but it is awesome, It is legend that the founder of the Chiefs, Lamar Hunt, said that the inspiration of the Chiefs arrowhead logo was the Niners' red SF oval. It is a good possibility when you them head-to-head here. KC's red/white/red/white bounces beautifully against SF's gold/red/gold/red combo. Bang on! 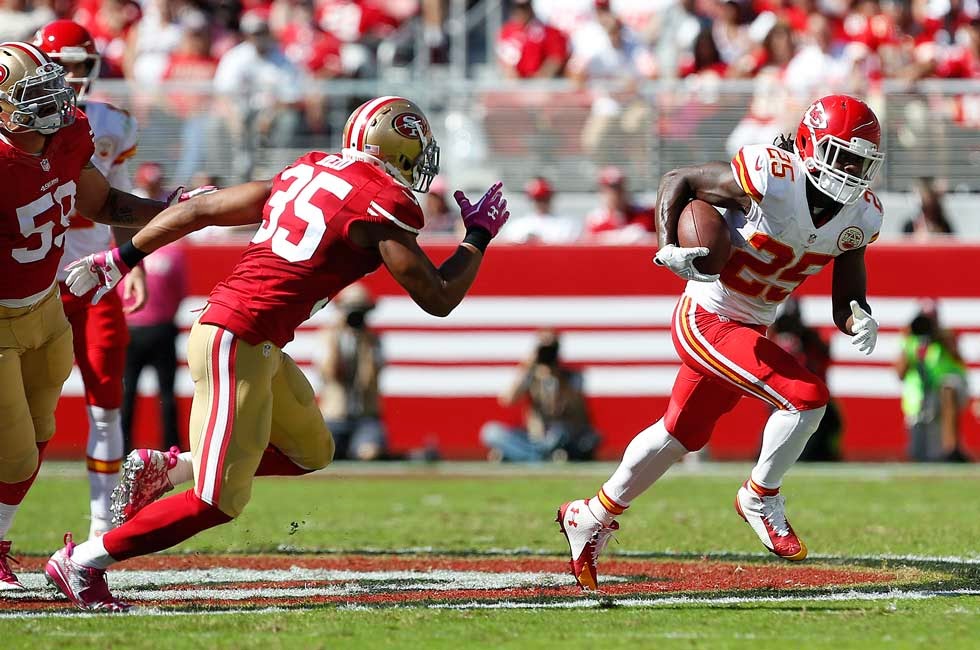 2) Browns-Titans: CLE in brown/white, TEN in white/navy. Titans, still in white at home, get with the program and wear the navy trousers like they're supposed to. And, coupled with the Browns in brown, it puts a pop into this matchup. Kudos. 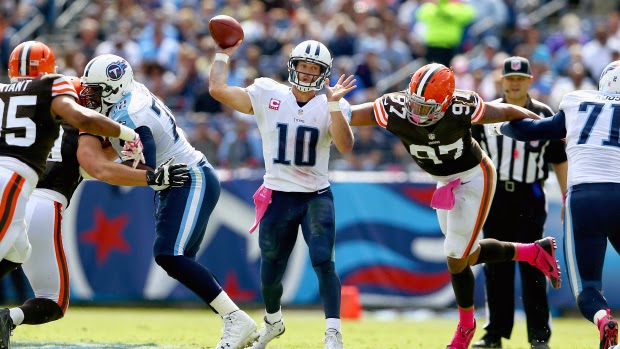 1) Bills-Lions: BUF in white/blue, DET in honolulu blue/silver. Bills pick out a good week to break out the blue pants. Looks great against another sweet uni in the Lions and those honolulu blues. Silver and red add a nice compliment to the matchup. Rust belt cities in fun belt unis! 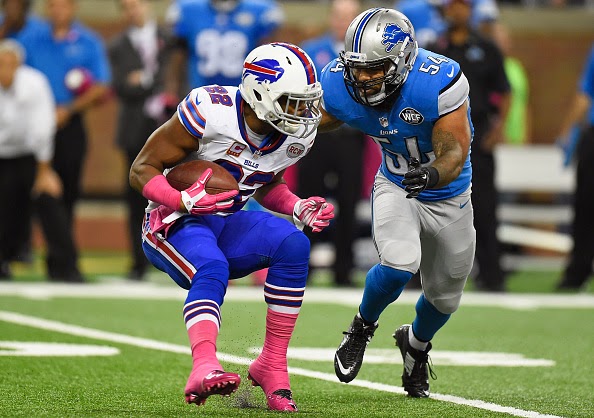 In closing, I did find this week's uni matchup the season's best so far. Really some good combos!

Looking forward to Week 6's roundup. See you then!