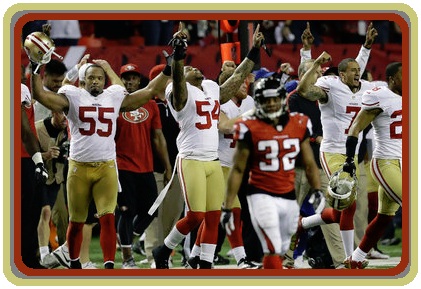 So these are the games that get you to the Super Bowl. 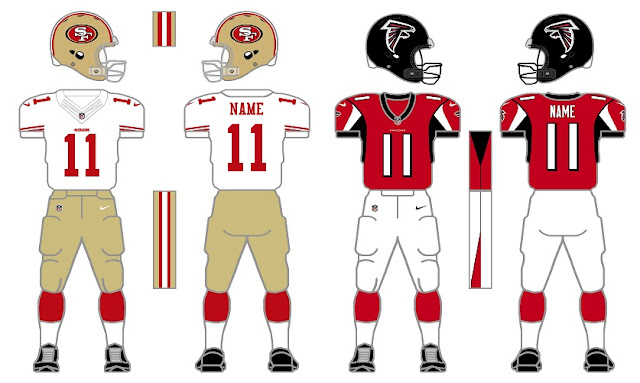 49ers-Falcons: SF in white/gold, ATL in red/white. A lot of red to be sure, so the key here is the trim colors. Of course, there's white. Then add in the Niners gold helmets and pants, with a pinch of black surrounding the SF oval on the helmet, the red-white-red stripes on the helmet and pants, and the red socks. Also sprinkle in the black helmet on the Falcons with a touch of silver on the helmet logo. Nice juicy black outlines on the numerals, the helmet logo (though tiny) on the sleeves. White pants with the kinky striping on the sides. You have a rather nice uni matchup. Not extremely colorful, but enough variation in trim colors that the reds doesn't dull the senses. 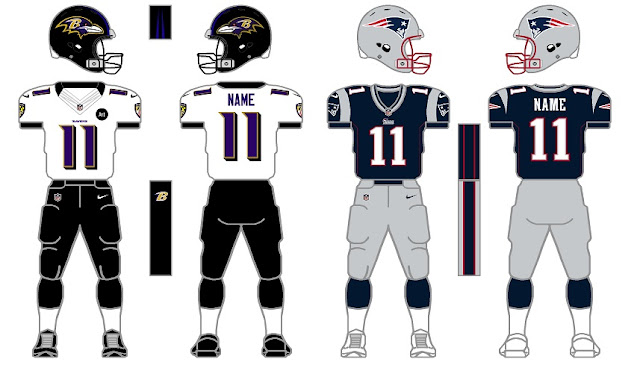 Ravens-Patriots: BAL in white/black, NE in dark blue/silver. We have seen the Patriots in so many of these playoff encounters at home in recent years that the blue/silver look is actually expected. The Ravens, seeming to cash in on their winning ways in black pants in this season's playoffs that they rode the black pants to the AFC title game. It was the correct option. This matchup didn't spark me as much as the NFC title tilt, but it's not a disaster, either. Again, the black pants may be a little black overload on the Ravens part, but there is also purple numbers, gold and flakes of red and yellow (based on the Maryland coat of arms shield on the sleeves) to add a touch of zing to their togs. The Patriots, in standard dark blue with silver on the helmet and pants with bits of red trim, is the hallmark of playoff unis for roughly the past decade. A good matchup, but not the best.

Before we get to Super Bowl XLVII on February 3rd at New Orleans, we do have (what very well could be the last) Pro Bowl this Sunday in Honolulu. This year, the Pro Bowl unis have been kept under wraps, and now, even only 3 days before the AFC-NFC tilit itself, we don't have a clear idea of what they will really look like.

Still. we will eventually know, and post them on the GUD, and I will review them, just like the previous 20 weeks. We don't want to miss the possible swan song of the Pro Bowl, y'know??

Anyway, check in with us for our take on the PB unis right here.