If there is one word to describe the 16-year career of wide receiver Cris Carter, it would be consistency.

In an era where passing and receiving records fall regularly, it is sometimes easy to fail to appreciate the careers of those who came before. Consider these facts when pondering the accumulated totals from Carter's career, where he ranked second all time in career receptions with 1,101 and touchdowns with 130 at the time of his retirement following the 2002 season. 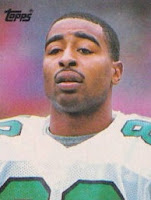 Of course, none of this seemed possible when Carter was released by  Philadelphia just prior to the start of the 1990 regular season. His three years with the Eagles were tumultuous. Substance abuse issues and off field problems forced management to waive his contract as he had become an unreliable performer and distraction to the team.
Carter played mostly a back up role in his first season with Minnesota and focused on cleaning up his personal life. After the 1991 season a regime change brought in a new head coach, and a newly focused Carter began to emerge a primary weapon for Minnesota's offense.

The Viking's quarterback situation was unsettled, neither Rich Gannon nor Sean Salisbury emerged as the full-time starter. Despite the uncertainty, and three games missed with a broken collar bone, Carter lead the team in receptions, yards and touchdowns. Missed starts were rare for Carter, who played a full 16-game schedule in 13 of his 16 seasons, totaling 234 games played. The Vikings began a run under coach Dennis Green where they would qualify for the post season in eight of nine seasons.

A change in quarterback in 1993 from Gannon to Jim McMahon brought Carter's first of eight consecutive 1,000 yard seasons, Pro Bowl invitations, and another playoff berth. But the greatest success was just around the corner.

Moon arrived via a trade with the Houston Oilers, settling Minnesota's revolving door at quarterback (for two-and-a-half seasons anyway.)  With stability in the offense, Carter was able to establish a rapport with the Vikings passer and strung together three great seasons and for the first time saw his name appear in the NFL record books. 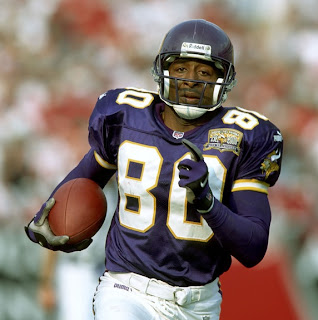 Carter established the NFL record for receptions in a season with 122 in 1994. His 1,256 yards and seven touchdowns as Minnesota's primary receiving threat saw him named First Team All Pro as the Vikings won the NFC Central, but for the third straight year went one-and-done in the playoffs.

1995 was an even better year for Carter personally, even though Minnesota as a team slumped to 8-8, He matched the remarkable 122 catch effort from the year before, but augmented it with 1.371 yards and an NFL leading 17 touchdowns - including four 12-reception games. Amazingly, he was only named Second Team All Pro, as he tied for second in the league for catches that year. Jerry Rice also had 122 receptions while Herman Moore set the new mark at 123.

A mid-season collar bone injury to Moon brought another quarterback change for the Vikings, but Carter continued his reliable production. With Brad Johnson taking over Carter finished the season with 96 catches, 1,163 yards and 10 touchdowns. His three year total for 1994-1996 still ranks among the most prolific of all time: 48 games played, 340 catches, 3,790 yards and 34 touchdowns.

Carter lead the NFL with touchdown catches again in 1997 with 13, despite Johnson being unable to complete the season with an injury. Randall Cunningham took over in December and the Vikings won their first playoff game under Green in the Wild Card round. 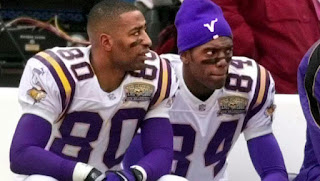 In 1998 a renewed Cunningham commanded the NFL's highest scoring offense in history, and Carter was a major part of their success. Minnesota's 556 points scored (averaging 34.8 points per game) broke the record of 541 held by the 1983 Washington Redskins. Although rookie receiver Randy Moss broke onto the scene and stole most of the headlines, Carter had another 1,000 yard season on 78 catches and 12 touchdowns. The 15-1 Vikings advanced to the NFC Championship Game, but lost in overtime to the Atlanta Falcons.

The following season may have been Carter's best season of all. His 90 catches for 1,241 yards and league leading 13 touchdowns (his fifth consecutive season with at least 10 scoring receptions) were punctuated by a 13.8 yard-per-catch average, his highest of any season where he caught more than 40 passes. He was rewarded with a spot on the First Team All Pro list. Most significantly, Carter was awarded the NFL's Walter Payton Man of the Year Award, which is an honor give in recognition of a player's volunteer and charitable efforts, showing how far he had come since his early days in Philadelphia.

Following two more productive years in Minnesota, which included becoming just the second player to reach the 1,000 catch plateau in 2000, Carter temporarily retired. He was lured out midway through in the 2002 season by the injury depleted Miami Dolphins who were engaged in a three team race for first place in the AFC East. Carter retired for good after the season.

The six-time finalist joins 11 other Vikings in Canton, continuing a run of recognition for Minnesota as Carter is the fifth member of the franchise to receive enshrinement in the past six classes (Chris Doleman 2012, John Randle, 2010, Randall McDaniel 2009, Gary Zimmerman 2008.) Carter played in 188 games (with 177 starts) and had 40 of his 42 career 100-yard games with the Vikings, and is one of only six players to have their number retired by the club. He is also a member of the NFL's All Decade Team for the 1990's. 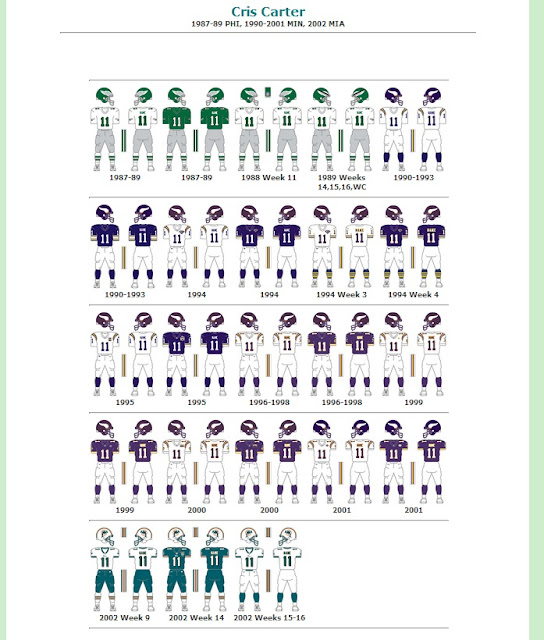 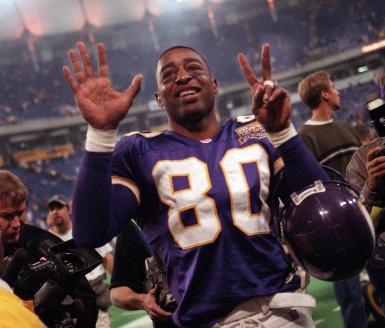