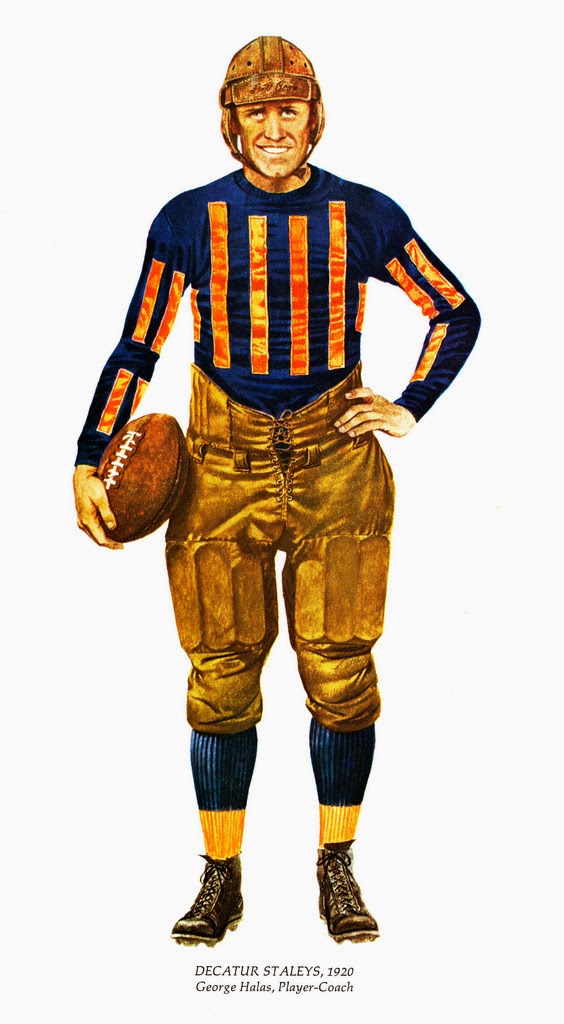 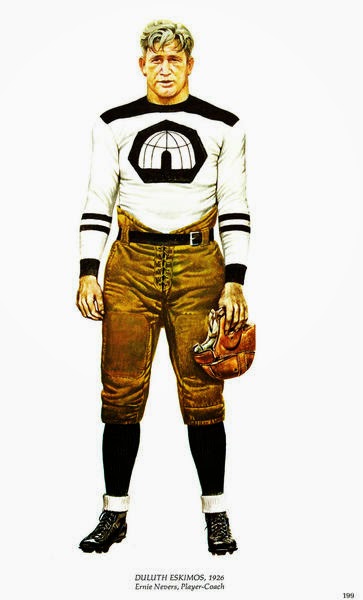 Many of you, I'm sure, have seen at least parts of the collection of Merv Corning's artwork similar to the George Halas image, and others, above. Mr. Corning was commissioned by the NFL to create the images for the book "The First 50 Years" in 1969. Similar drawings of Ernie Nevers in his Duluth Eskimos uniform and Bronko Nagurski in a psychedelic 1936 Bears uniform have been carved into our collective football souls. But never, never, never, did I believe for a single second that, if by chance one of these famous drawings could be incorrect, it would happen to be the above drawing of "Papa Bear" George Stanley Halas. Recent evidence has turned up that this uniform, very likely, was not worn until the following year (1921), when the Bears Staleys moved to Chicago.

This marks the second time in the last few years that we at the GUD, along with the help of our loyal viewers and contributors, have discovered an erroneous, long-standing misconception of a very early League franchise. If you remember back to October, 2012, our own Tim Brulia penned an article posted on Uni Watch explaining how, despite the claims of the Pittsburgh Steelers, the 'bumblebee' uniform that was made into a throwback jersey that the Steelers have worn the past two seasons and attributed to the 1934 season, had, in fact, only been worn in 1933 (along with the equally detestable 'City Seal' jersey).

As THE Bears fan residing in GUD, it pains me to say that it is extremely, 100% likely that the Chicago Bears organization has NOT always worn navy and orange. "Sacrilege," you say? I couldn't agree more. Up is down. Black is white. Cats and dogs getting along. We're talking the seventh sign of the apocalypse here!

How could this happen? All football fans with a shred of League historical knowledge know how George Halas, a University of Illinois alum, purchased the Decatur Staleys and remade them in the image of his alma mater donning the navy and orange that the Bears have worn for almost 100 years. What we have discovered, with the help of a contributor, identified as "LJP," that no fewer than 6 different articles from the 1920 Decatur Review refer to the Staleys as wearing red (or crimson) jerseys.

Two possibilities exist. The first option is that the reporter for the Decatur Review was color blind and his editor didn't notice any of these 'errors.' The second option, and dare I say the more likely of the two, is that the Staleys actually wore red. In hindsight, I guess we should have seen this coming. After all, since the story goes that he remade the team in the image of the University of Illinois, the Staleys HAD to have been in something else besides navy and orange to necessitate that subsequent change in the first place.

While we don't have enough to substantiate the reason for this discrepancy in the history of the Bears' organization, enough is known that we can assemble a viable postulate for the circumstances surrounding what likely happened over 90 years ago...

In 1920, George Halas moves to Decatur, Illinois, to take a position with the A.E. Staley Company, a starch manufacturer. For the sake of argument, let's assume that the Staley Co. bore red in its logo and the team was supplied with red jerseys. The team takes a financial loss in 1920 despite superior play and Halas buys the team in order to move them to the big city, Chicago. There is a suspicion that a condition of the sale, likely an advertising ploy, is that Halas must retain the team nickname of "Staleys" for one year after moving to Chicago. This would explain the single year of operating as the "Chicago Staleys" in 1921. However, Chicago already boasts a professional football team, the Cardinals, who wear...you guessed it...red jerseys (technically maroon but definitely in the same 'ballpark'). That year Halas refurbishes the team in the navy and orange image of his beloved alma mater, the University of Illinois, in order to appeal to local fans and eliminate any chance for confusion with the Cardinals. With the conditions of his purchase satisfied, in 1922, Halas renames his team the "Bears" because football players are larger than the baseball-playing denizens his team will be sharing Wrigley Field with, the Cubs, thus creating a timeless link between the two franchises.

There is even a distinct possibility, though unsubstantiated at this point, that the Staleys continued to wear red jerseys early on in the 1921 season before eventually changing colors at some time in midseason but that remains unconfirmed at this point.

Here are the snippets from the Decatur Review that have been brought to our attention... 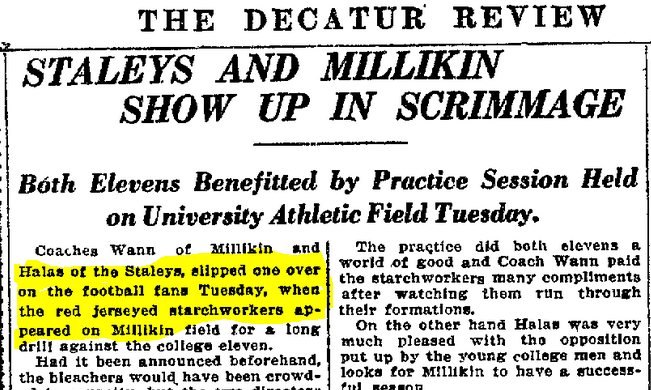 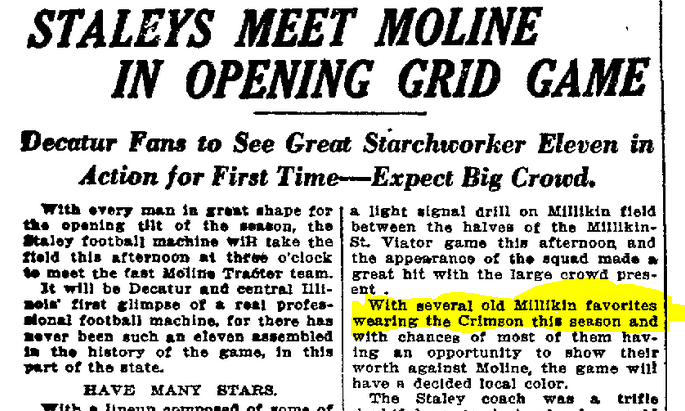 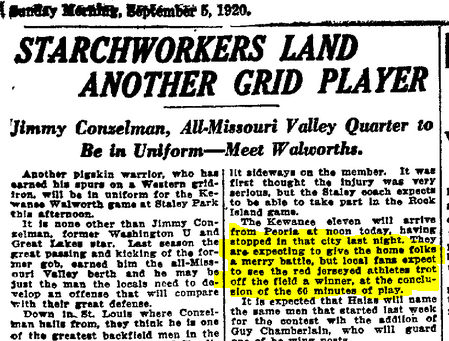 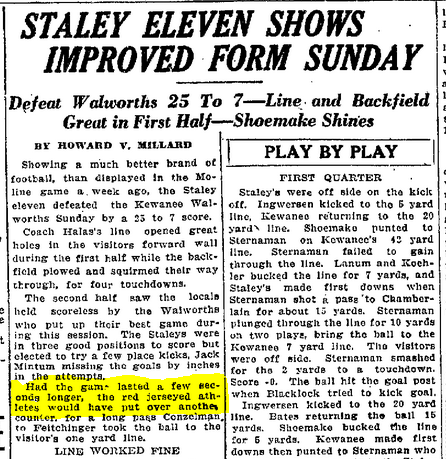 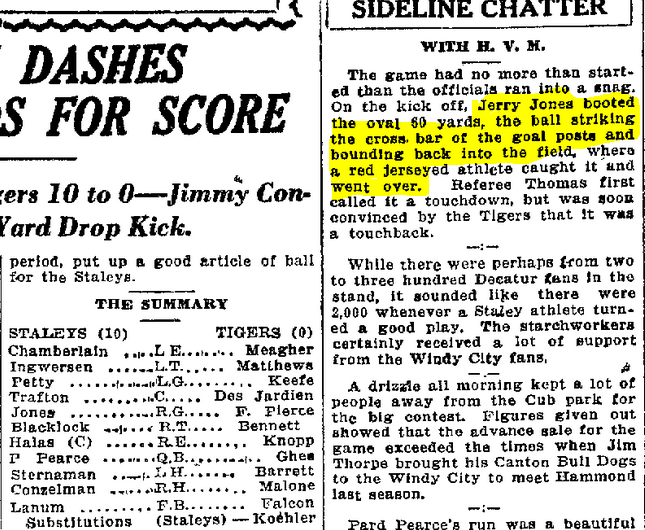 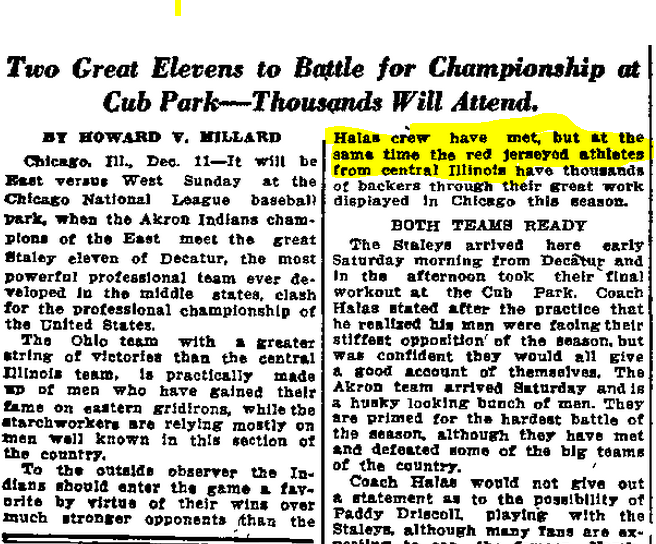 Because of this preponderance of evidence, the GUD is changing the image for the 1920 Decatur Staleys to a crimson/red version of their jerseys, assuming that the general design was correct and the colors, only, were incorrect. We are, however, holding off on changing the 1921 image to include additional red combinations until such a time as evidence is produced proving that they were, indeed, worn after 1920. 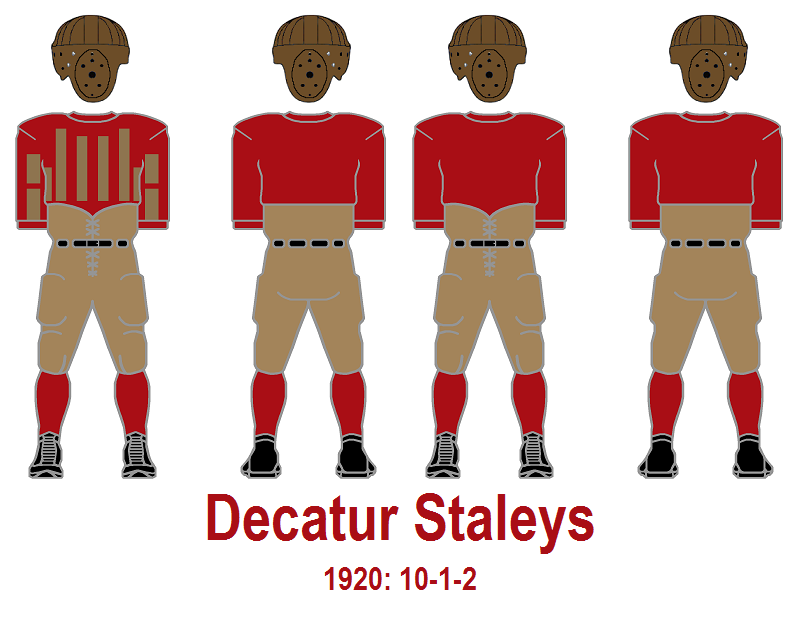 Hopefully, my fellow Bears fans can come to grips with this as I have. 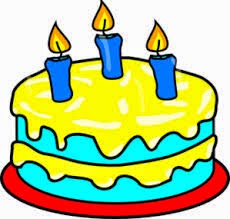 Please allow us to celebrate ourselves for a little bit.

Sunday, June 12, 2011, the Gridiron Uniform Database (GUD) went live on the web.  We attempted to be the definitive source for pro football uniforms.  Without any attempt at ego boosting, we believe we are achieving that goal.

In our previous birthday blogs, we have cited what we have accomplished over the past 365 (or 366) days. And, we will do so here, because we feel that we have done more than ever before since 6/12/13.

In the coming days, weeks and months, we certainly will be monitoring the 2014 season as closely as anyone.  BUT BUT BUT, we have a major find unearthed by a contributor that merits a blog of its own! Watch this space this Saturday (June 14) for a blog by Bill regarding this bit of news as well as a word from our friends at Uni Watch regarding this discovery.

As always, we wish to thank all of you who take interest in the GUD and a special tip of the helmet to those of you who have pointed out our goofs and not quite right uni depictions. You are a vital component helping the GUD to be the very best that it can be. We appreciate that beyond words!

Have a piece of birthday cake on us!

Don't forget to watch this space on Saturday!!