As we put a wrap on the 2013 regular season, don't forget, we'll be doing this right through the Super Bowl.

16) Jets-Dolphins:  NYJ in green/white, MIA in white/white.  No surprises, I guess.  Lots of white due to South Florida's warmth.  So no green pants on the Jets, no aqua pants on the Dolphins.  And thus, no real props from me.

15) Bills-Patriots:  BUF in white/white, NE in navy/silver.  To those who don't like dark pants...if the Bills had worn blue pants in this matchup, it would have electrified the Bills look.  The vibrancy of those pants just make the Bills uni pop, nay, explode.  In all white, the Bills look like any other vanilla clad team.  The Patriots in their normals, have to carry the load in this one, which they do well. 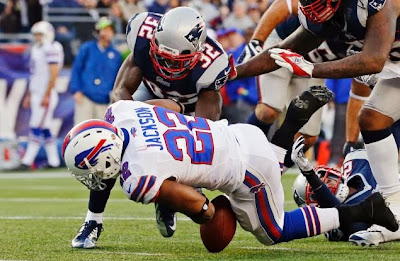 14) Texans-Titans:  HOU in white/navy, TEN in columbia blue/navy.  While it's the only time this season the Titans wear the two-toned blue look, it may be the worst time to wear them, against the Texans with their navy pants.  I definitely would have preferred either the white pants or the columbia blue brtiches.  Just a little navy overload on the pants.  Ah well.

13) Broncos-Raiders:  DEN in white/white, OAK in black/silver.  Nothing remarkable here.  Raiders in the renowned silver and black, and the Broncos in the rather glum whites with navy dominant trim.  Just a thought...maybe the Broncos could go with orange numbers on the whites next season??

12) Buccaneers-Saints:  TB in white/pewter, NO in black/black.  Again, best move by the Saints to do all black rather than create a little overload on the metal colors.  I agree with some of the critics of the black pants, in that the Saints could certainly use some stripes on them.  Maybe next year,  But for now, this does me good.

11) Ravens-Bengals:  BAL in white/black, CIN in black/black.  Whole lotta blackness goin' on.  Thinking the Bengals could have gone with white trou.  Hmm...maybe the Ravens could think about a set of purple pants next season?  Glad for the Bengals orange helmets to relieve all of the black (and Ravens white jerseys).

10) 49ers-Cardinals:  SF in white/gold, ARZ in red/red.  Wouldn't have mattered if the Cardinals would have worn white pants, this matchup would still be heavy on the red.  But Big Red decided to roll with all red and this becomes a red fest.  Only a little gold from the Niners and itty bitty black trim from the Cardinals stem the flow.  I care for this one, but not as much as I should.

9) Rams-Seahawks:  STL in white/white, SEA in navy/navy.  What could have been another case of navy overload stops short as the Rams go with all white, with the Seahawks not about to budge from all navy.  With gold and neon green as trim colors, I feel this one is better than usual.  Side note, with this being the Seahawks final home game of the regular season, it's 38 years and counting and the Seahawks remain the only team in the NFL to have never worn white jerseys in a home game. 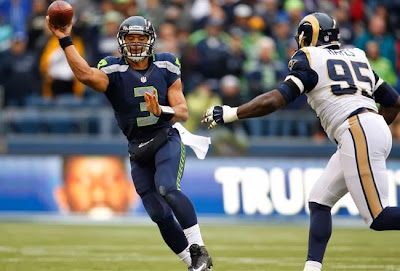 8) Eagles-Cowboys:  PHI in green/white, DAL in white/mint.  The season finale, and it ends on a high note.  The Eagles in the deep green jerseys, the Cowboys in white, with the shades of silvery blue and silvery green, with bright blue jersey numbers.  Nothing crazy, but good looks.

7) Panthers-Falcons:  CAR in white/white, ATL in red/white.  This one has a good sense of color and what to do with it.  Red, black, carolina blue and silver help to make the spirits bright on this one.  Keeps black at bay, despite both teams using it.

6) Packers-Bears:  GB in white/yellow, CHI in navy/white.  As you may know, the CHI at GB matchup is normally my absolute favorite.  When it's reversed, not so much.  Why?  Perhaps when the Pack wear white jerseys, then it seems to be an overload of yellow.  And the Bears in navy jerseys just don't seem to grab me where I belong as much as they do in white over navy.  Still, this one beats most other matchups, just not all of them!

5) Redskins-Giants:  WSH in white/yellow, NYG in blue/gray.  This is a pretty good matchup.  Like the colors; burgundy, blue, red, yellow.  Nice combos. Traditional rivals who look good without trying to shout the goodness at you.  One of the better ones to close out the regular season.

4) Browns-Steelers:  CLE in white/white, PIT in black/yellow.  Earlier this season, the Browns faced the Steelers in the tootsie roll look.  This encounter, the Browns play it close to the vest and go with the traditional all whites.  It's a good move as I'm in the mood for the traditional in this one. Make them more like Browns and more like Steelers.

3) Chiefs-Chargers:  KC in white/red, SD in navy/white.  One of my favorites.  Not so much the colors, but they seem to be in just the right places, and the yellow trim that both teams employ also seem to fit snugly in place.  A visual treat. 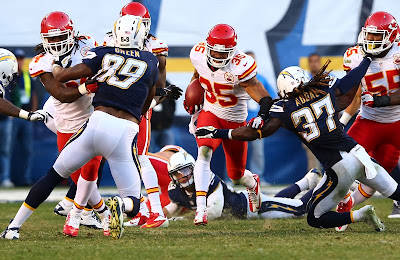 2) Lions-Vikings:  DET in white/silver, MIN in purple/white.  We've seen this uni matchup countless times, but more often than not, it's in these colors, with some modern trim.  Silver and purple.  Some honolulu blue, yellow and a touch of black to mix in.  I think it looks good. 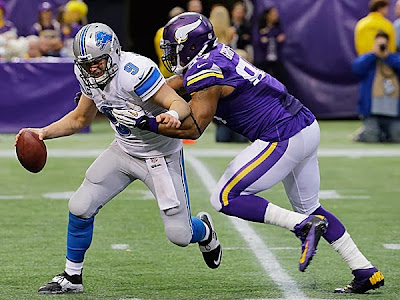 1) Jaguars-Colts:  JAX in white/white, IND in blue/white.  2013, meet 1957.  Well, it's kinda like that in this matchup.  Surprisingly, it works. The contrast is remarkable.  The Jags with all the honking tricked up unis, with brash accessories, including the helmet, the sublimination laden white jersey, not to mention the zappy black pants, with a breath of gold and teal.  The Colts, with simplistic white helmet, routine blue jerseys with basic block numbers, bland white pants with a pair of blue stripes.  Put 'em together and we are the winners. 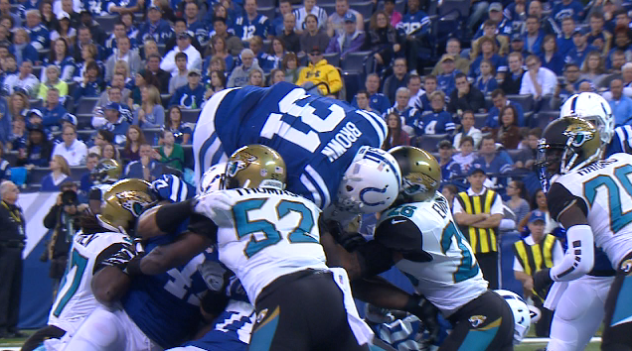 Hope you all had a grand Holiday season.  Back next week with the Wild Card Round uni matchups.  Stay with us!