I have been remiss in letting Tim & Bill have all the fun lately here at the Gridiron Uniform Database Blog, so to remedy I am going to start a new feature called "Remember This?" where I talk about or show a YouTube clip from an old NFL game and add it to our database.

Our first one is from October 25, 1987, the Eagles playing the Cowboys, two weeks earlier these two teams met in Dallas and the Cowboys ran up the score, well now it's the rematch at The Vet and the Eagles are leading 30-20 and looking like they are just going to run out the clock, when Buddy Ryan has Randall Cunningham fake the kneel down and throw for the end zone.

So we've added this game to the database, you can see it here:  http://www.gridiron-uniforms.com/matchups/1987/1987_7_DAL_PHI.html 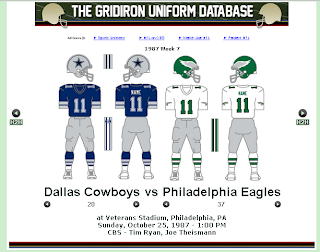 If you have a memory of an old game you'd like us to add to the Gridiron Uniform Database or come across on YouTube an old game that would be good for this feature, send it to us at info@gridiron-uniforms.com.
0 comments


Sorry for the delay, folks.

13) Falcons-Cardinals:  ATL in white/white, ARZ in red/white.  Nope, not one of my favorite matchups.  Red and black fulfills both teams' colro schemes.  Falcons in their rather mundane white and white unis, with the Cardinals in equally run of the mill red and white kits, with black trim. 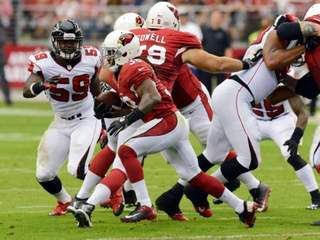 12) Dolphins-Patriots:  MIA in white/white, NE in navy/silver.  All that white on the Dolphin side of the field against silver, navy and a touch of red on the Patriots slice of the gridiron.  Not that much of an eye-please from these lens shielded peepers.


11) Cowboys-Lions:  DAL in white/mint, DET in honolulu blue/silver.  Shades of blue and gray at play.  Not much can be done when these two meet, so you have to grin and roll with it.  Again, normally good looks separately, but together, they are a little repetitious.

10) Jets-Bengals:  NYJ in white/white, CIN in black/black.  Yet again, the Jets go with what may well be my least favorite get-up of all, the white from head to toe, and the Bengals, rocking all black. The orange lids and trim of the Bengals and the slight touches of green save this from a gagger.  Not by much, though.

9) Seahawks-Rams:  SEA in white/white, STL in navy.navy.  Can't really find fault with the Rams gear, but I am a tad disappoined that the Seahawks used all white.  Should have sported the gray pants.  That would have made a sparkling matchup.  Even the navy pants would have been a slight improvement from this get together.

8) Steelers-Raiders:  PIT in white/yellow, OAK in black/silver.  Not much has changed in the looks of these two when they were playing for the right to represent the AFC in the Super Bowl back in the 70's.  Both teams with healthy doses of black, with healthy heapings of silver and yellow.  Not wild variances, to be sure, but these are colors that instantly identify these two.

7) 49ers-Jaguars:  SF in white/gold, JAX in black/black.  Another London affair, and the Jaguars roll with all black, except for that gold (mostly) helmet.  A rather bizarre pairing, what with the Niners rather mundane gold-white-gold-red suit and the very 21st century schizoid Jags togs. Somehow, it works.  It avoids the pitfalls of dull and predictable.

6) Giants-Eagles:  NYG in white/gray, PHI in green/white.  Very traditional look from these two, if a little contemporary.  Well blended palette of blue, red, gray and green with a slap of black.  You know what you're getting, but you're not that disappointed, either.

5) Browns-Chiefs:  CLE in white/white, KC in red/white.  Not too thrilling a look here.  Red, orange, brown and yellow.  More of the "warm" colors, or really, a nice autumnal batch of colors all mixed in here.  It is good, but don't excite these senses.

4) Panthers-Buccaneers:  CAR in white/white, TB in red/pewter.  The Bucs go for the red for the night game with the Panthers, who rock their all whites.  It is a nice matchup, with the reds bleding well against the black and carolina blue accessorized Carolinians.

3) Packers-Vikings:  GB in white/yellow, MIN in purple/purple.  Packers always look good.  The Vikes seldom look this good.  Welch's used to claim to serve 100% grape juice.  Well then this is 97% grape juice.  Again, if you have a dark jersey and dark pants on the hangar, then I think you should pair them up once or twice a year.  Really a distinctive and tasty matchup.

2) Bills-Saints:  BUF in white/blue, NO in black/gold.  The best possible combo matchup between these two.  It makes for a great matchup. Blue, black, gold, and a touch of red.  Really sharp contrasting colors. 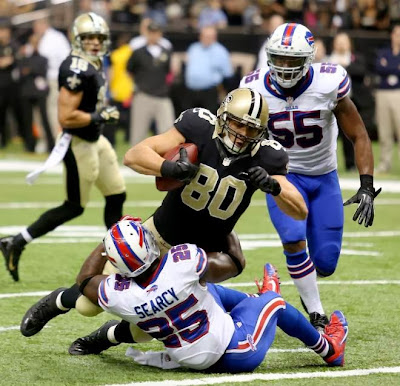 1) Redskins-Broncos:  WSH in white/yellow, DEN in orange/white.  This is what I like in a uni matchup. Triple combos (white/yellow/burgundy and orange/white/navy) and boy, it does stand out.  Variance of colors - unique colors - well placed and real eye candy for uni geeks like me.  Can't get much better! 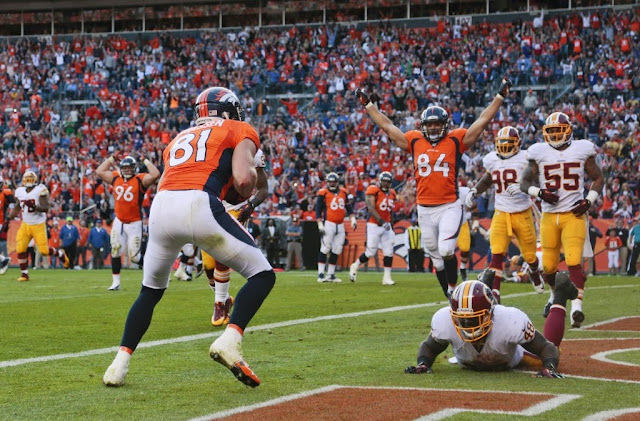 Back atcha next week!!