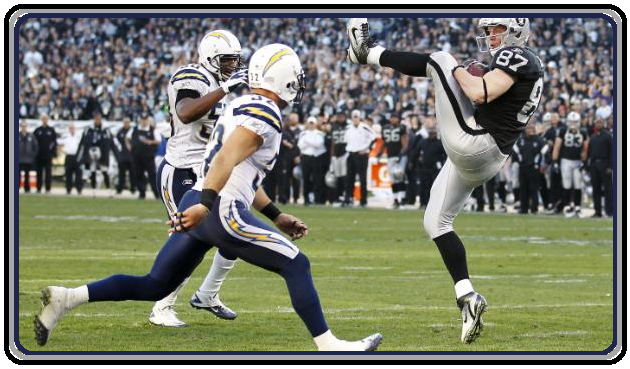 As my mom would always say, "Better Late Than Never." So with that, here's the final regular season installment of the Weekly Uniform Rankings. All games are intra-divisional.

One note of interest: Lately we have observed almost total anarchy with certain players and how they wear their socks. We even saw some teams wearing Christmas red and green last week. The Gridiron Uniform Database will ignore these "personal statements" on the wearing of non-team colors, including the October pink invasion of recent vintage. We will go and show what the team issue colors for socks are.

Panthers-Saints: Panthers in normal all white, with the Saints going black/gold. After having gone the previous 3 home games in all black, the Saints revert to the gold pants. And it does add some color to the proceedings. Not a bad matchup.

Bills-Patriots: Bills all white and the Patriots in navy/silver. So the rumored Bills blue pants never made it on the filed in 2011, preseason or regular. Perhaps they don't exist. It would be nice of they did, because that would added a little spark of color here. Still, these Bills unis were a full cut above what they had worn for the previous 9 seasons.

Bears-Vikings: Bears in the white/navy and the Vikings in the purple/white. Both teams stayed with the basics in this one. Bears not going all white, Vikes not straying into all grape. And it looks so natural.

Jets-Dolphins: Jets also staying more to the traditional in green/white while the Dolphins stayed with all white at home. Not that visually appealing, with loads of white, but in warm, sunny Miami, it is the thing to do.

49ers-Rams: Niners in normal white/gold and the Rams in blue/gold. A lot of gold. I like me some gold, in my pocket, not on my pants. Well, what I mean to say is this game had a lot of gold. I think the Rams should have rocked some blue pants here. I think of their choice of the three pants they could have gone with (the throwback yellows are off-limits), the blues would have worked best.

Lions-Packers: Very traditional look from both teams. Lions in white/silver and the Pack in green/yellow. Nice and easy.

Titans-Texans: Titans in white/columbia blue, Texans in navy/white. Again both teams could have opened it up here with their choice of multiple pants colors, but both went conservative. I just once would like to see the Texans break out even only the red socks. That would make everything else pop.

Redskins-Eagles: Skins in white/burgundy and the Birds in green/white. Not real compelling, but a decent amount of color. Burgundy, yellow, green, black and - of course - white. Old school teams in sorta old school colors. Still works after all these years.

Colts-Jaguars: Colts in all white and the Jags in teal/white. The Jags colors bounce nicely off the Colts vanilla look.

Ravens-Bengals: Balto in white black and Cincy in all black. Hmph. Both teams trot out the black pants. I guess I'd rather this than both in white pants. The best matchup would have had one (either one) team in the black trousers and the other in white britches. That would have been the best bet here.

Chiefs-Broncos: Chiefs in all white and the Broncs, for the fourth home game in a row, wear all blue. Amazingly, the Broncs only wore blue/white at home twice in 2011. Chiefs need to wear black cleats with the white/white/white, if just to break up the sheer whiteness of this look. The red pants would have added the pizzaz.

Steelers-Browns: History here, folks. Steelers in black/yellow and the Browns for the 16th and final time, go all white. The Browns become the first team in 13 years (1998 Tennessee Oilers) to wear white for a full regular season. And, in this case, not the best move. The brown jerseys would have added a nice color for this game. But, its always good when the Steelers can rock the black/yellows, so it's not so bad after all.

Chargers-Raiders: Chargers in white/navy and the Raiders in black/silver. Not so bad, really. Nice blend of (dullish) colors. You have navy, yellow, a pinch of powder blue, black and silver. White as well, but just on one team. So AFL'ish!

Seahawks-Cardinals: Seahawks in all white and Big Red in...big red. Must be something in the Mountain Time Zone air. Like their time zone brethren in Denver, the Cardinals bust out monochrome for the fourth time in 2011. And again, Seattle refuses to budge from either all white or all seahawk blue. I do like.

Buccaneers-Falcons: Bucs in white/pewter and Falcons in red/white. Good move by the Bucs to go metallic and not go all white. Would have been too much red and white. So, the pewter pants does add style points for good spicing of colors.

Cowboys-Giants: Cowboys in white/green-blue-silver and the G-men in blue/home gray. If you know about their earlier match-up, you know about the unique blue/road gray Giants combo. And you are a devoted student of the Gridiron Uniform Database. This was more normal and not so bad.


Sooo then, ranking on the final week of the 2011 season:

Stay tuned to the Gridiron Uniform Database as we continue to monitor the uni season right thru the post season!!
1 comments


Well, school has started back up so I missed a day or two of our "On This Day..." but we are back today with an exciting playoff game from nine years ago.  The 49ers came back from a 24-point deficit and took a 39-38 lead, but the Giants had a last second field goal attempt to win the game.  Watch the end of the video to see how it turned out.  It was a bad call by a referee (who happened to be wearing glasses, by the way) that prevented the Giants from getting another shot -- the pass interference call should have stood, the ineligible man downfield shouldn't have ended the game, because the lineman who was interfered with was eligible, and the pass interference call on him should have been offsetting penalties, and the down should have been replayed.  The NFL later admitted the call was wrong.

Read a further write-up about the game here. 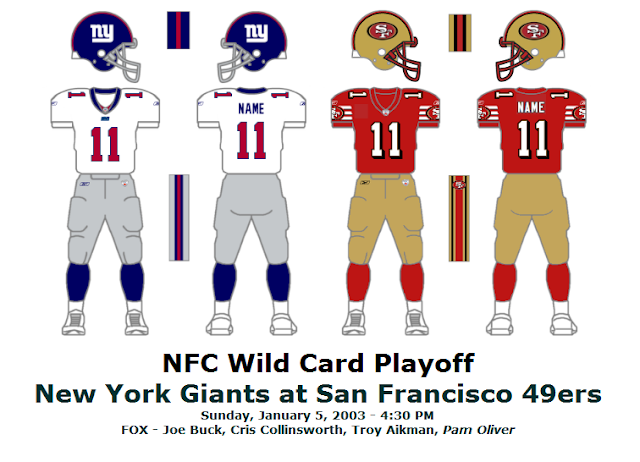 On This Day... twenty-nine years ago Tony Dorsett of the Dallas Cowboys ran the length of the field for a 99 yard touchdown against the Minnesota Vikings on the season finale of Monday Night Football.  Because of the strike-shortened season, the regular season went into January for the first time... 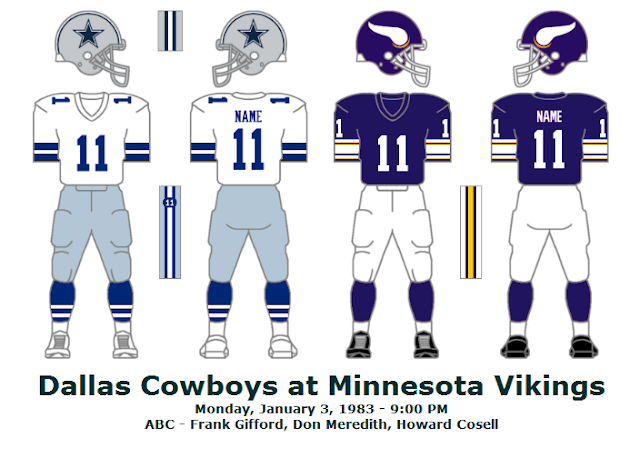 More to come on this exciting game later today as we add this game to our database of past NFL matchups.
0 comments