This off-season our guest columnist Larry Schmitt wrote blog articles looking at "matching rivals," pairs of teams -- such as the Cowboys and Lions or the Chargers and Rams -- whose appearance has mirrored each other during a certain time period.  Today he concludes this series with a look at two teams you ordinarily wouldn't think of as "matching," the San Francisco 49ers and the Tampa Bay Buccaneers.  Larry shows us, however, that during a ten year period from 1997 to 2007 they indeed looked very similar. 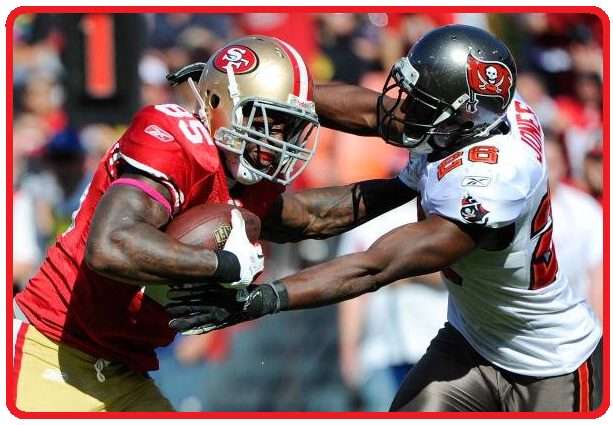 The Tampa Bay Buccaneers joined the NFL as an expansion team in 1976, and immediately made a splash on the football field. It wasn't necessarily with their play (they would not win a game until late in their second season) but with their appearance. The colors are reminiscent of the era they were born, the 1970's: bright "Florida Orange", red and white, while the Errol Flynn inspired logo "Bucco Bruce" was at home in Gulf Coast Florida. No other team has looked like the Buccaneers before or since. Today they are fondly considered classics, and have been nicknamed "Creamsicle Uniforms" when they are broken out as throwbacks.

Coming from a completely different direction are the San Francisco 49ers. Their red and gold roots trace all the way back to the leather-helmet era AAFC of the late 1940's. For the first 18 years of their existence, the 49ers switched back-and-forth between gold and silver as the complimentary color to their standard red. San Francisco's iconic look finally appeared for the 1964 season. The gold helmet and pants, featuring red-white-red center stripes, scarlet jerseys with white block numbers, and three white stripes on the sleeves and socks became very familiar to football fans in the 1980's, as the 49ers emerged and the league's dominant team, winning four Super Bowls behind Hall of Famers Joe Montana and Ronnie Lott.

It probably comes as a surprise that these seemingly distinct franchises have more in common than quarterbacks named Steve (Spurrier and Young).

Both teams remained steady and true with their uniforms through the mid 1990's. The NFL's 75th anniversary season of 1994 introduced a new concept that would shake up many teams concepts of uniform design - the throwback.

San Francisco's selection for their retro uniform was based on their 1955 set. Like many teams, their accuracy was slightly less than perfect (the NFL would have benefited from having the GUD in 1994!). They retained their contemporary helmets, but the white pants and drop-shadow numbers were an instant hit with fans. The NFL had originally intended for the 75th Anniversary throwbacks to be worn during designated weekends early in the season, but capitalized on their popularity, and granted teams permission to continue using them for the duration of the season. The 49ers continued their trek to Super Bowl XXIX wearing uniforms that closely resembled the ones worn by Joe Perry and Leo Nomellini.

Given NFL Properties strict guidelines regarding uniform or logo changes being submitted before licensees can adapt, San Francisco and the rest of the league looked very much as before in 1995. The following season, however, brought much change.

The 49ers revamped their entire ensemble for the 1996 season, including their color palette. Gone were the scarlet jerseys and "Forty-Niner Gold" pants (which were almost beige), replaced by cardinal jerseys and white pants with black and red stripes (inverted from the original red-black-red pattern). Black drop-shadows were back on the numbers, now accented with gold trim. A newly stylized interlocking "SF" logo appeared on the three sleeve stripes, which were also trimmed black shadows. The red-white-red helmet stripes were replaced by a cardinal stripe with black trim, and the face mask was now also cardinal. The white pants only lasted two years, replaced by brighter, more metallic gold with a cardinal center stripe flanked by two black stripes with the oval "SF" logo on the hip. This was a unique design that was rooted in 49ers past giving it a throwback feel, but also with a modern feel at the same time.

In 1997, the Buccaneers did not have much of a past to draw from. In their 21 season in the NFL they pretty much wore the same Florida Orange uniforms. When it came time for a change they went forward into the future. Florida Orange became pewter, and Bucco Bruce became the Jolly Roger. Head coach Tony Dungy's team would not only have a new look as they moved from Tampa Stadium into Raymond James Stadium (featuring it's own pirate ship at one end zone), they would experience new on-the-field success as well.

Stripeless, pewter helmets featured the new logo of a red pirate flag suspended from a sabre, and a black face mask. Red jerseys with black trim and a black alternate logo on the sleeves. The three-tone block numbers were white with orange and black trim. Pewter pants featured similar three-tone striping: a bold red stripe trimmed with orange and black. The socks were solid black. Clearly, the new image the team was seeking was one of intimidation. For a change of pace, an alternate pair of white pants with the same striping pattern was available and would be worn with either the red or white jersey.

As fate would have it, Tampa Bay opened the 1997 regular season at home against San Francisco. As is the Buccaneers tradition of early season warm-weather games, they opted for white at home. Warren Sapp, Derrick Brooks and John Lynch terrorized the 49ers' usually potent offensive attack and came away with a 13-6 victory, a springboard to a 10-6 season and Tampa Bay's first playoff birth in 15 seasons.

San Francisco went back to gold pants for the 1998 season, and they featured a very similar trait as the Buccaneers - the broad red center stripe, flanked by gold and black trim. The 49ers also added their oval "SF" logo to the hip. Like Tampa Bay the season before, San Francisco debuted their new uniform at home with an inspiring victory, this one an overtime thriller versus the Jets, that was won with a 96-yard gallop by Garrison Hearst in overtime. Their 12-4 record earned the 'Niners a home Divisional Playoff contest against the defending NFC Champion Packers. Again San Francisco triumphed in dramatic fashion, this time with Steve Young hitting Terrell Owens with a 25-yard pass at the goal line in between two defenders for the come-from-behind 30-27 win.

Four seasons later, San Francisco would meet Tampa Bay again, this time in the post-season. The Buccaneers wore their red jerseys and pewter pants at home in the Divisional round.. Last minute heroics were not needed, as they defeated Jeff Garcia's 49ers 31-6, on their way to a victory in Super Bowl XXXVII. Tampa Bay had come a long way from John McKay's "Creamsicle" outfitted team that lost their first 26 games in 1976 and '77.

As the 2000's moved forward, nostalgia reigned supreme as San Francisco brought back their classic scarlet and "Forty-Niner Gold" uniforms as throwbacks (including for a game against Tampa Bay in 2005. Ultimately this became their standard uniform again in 2009, keeping only the updated oval "SF" logo on the helmets and stripe-less socks.  The Buccaneers "Florida Orange" uniforms also returned in 2009 for the first time since 1996 as throwbacks. They continue that retro designation, as the Buccaneers retain their pewter and red outfits on most Sundays.

Thanks, Larry, for a wonderful piece on my favorite team the Bucs, and a wonderful series all summer long in general.  We look forward to many more entertaining columns from you appearing in the Gridiron Uniform Database Blog in the future.

As far as the Bucs and 49ers go, they continue to go 'round and 'round, both aesthetically as well as on the field.  In 2010, the again upstart Bucs led by Raheem Morris went into Candlestick and shut out the 49ers 21-0 on the way to a 10-6 mark in Morris' second year.  The defeat came in the waning weeks of Mike Singeltary's tenure as Niners' head coach, but in 2011 the tide again turned as Jim Harbaugh's squad shut down the Bucs 48-3 in Week 5.  The Bucs would win only one more game last year and finish the season with ten straight losses and Morris would be fired, while in Harbaugh's first year the 49ers would make it all the way to the NFC Championship, only a fumbled punt away from a Super Bowl berth.
0 comments