14) Bills-Jaguars: BUF in white/white, JAX in black/black. Played in London, the first fully webcasted NFL game (thanks, Yahoo!) ever features all white vs. all black. All not so right. Coulda looked a lot better with the Bills in blue pants and the Jags in either teal jerseys and/or white pants. 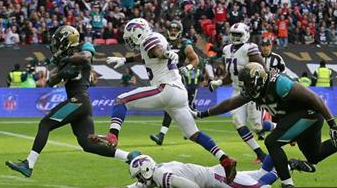 13) Falcons-Titans: ATL in white/white, TEN in navy/navy. Hmph. You know me, love the Falcons in red over white. All white? Naw. The Titans in navy over white? Count me in. TT in all navy? Naw. Thank goodness for the columbia blue sleeve panels on the Titans or I'd have a fit.

12) Texans-Dolphins: HOU in navy/white, MIA in white/white. A heckuva lotta white, mostly Dolphin white. I don't know, but this all white Dolphin scheme just continues to be a wasted opportunity. Falis against a rather sharp Texans navy over white garb.

11) Ravens-Cardinals: BAL in white/black, ARI in red/white. Hmm, I'm not sure what more could be done here. The Ravens did right by me with the black pants, and the Cardinals do look nice in their red over white. Good combos that when meshed don't quite work out? Maybe. Should the Big Red have gone with a red-red look? Not really. Certainly not the worst of the week, but not the best, either.

10) Eagles-Panthers: PHI in white/green, CAR in black/silver. I have no issues with the Eagles in the white over green combo, because it's good. It's the Panthers in the black over silver. It's too, um, Raiders-like? The dashes of Carolina blue help, maybe they should go with the pale blue socks? Or better yet, the all black with the blue hosiery? But this matchup could attain glory with a blue touch up by Carolina.

9) Jets-Patriots: NYJ in white/green, NE in navy/silver. Except for that silly "white-out" in Week 3, the Jets have done the right thing in wearing the green pants with the white shirts. It does a lot to help the cause against the Pats navy over silver standard. Sharp matchup. 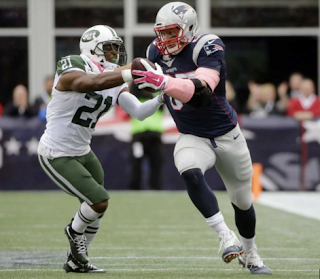 8) Cowboys-Giants: DAL in white/mint, NYG in blue/gray. This seems to be the NFL's version of MLB's Yankees-Red Sox. Every time they play each other, it's a national telecast. It's time to throw some variety into this mix. In the 1980's, virtually every time the Cowboys visited the Meadowlands, NY would force the Dallas hand and go WAH so they Pokes had to wear blue. It's time for this to return. Or at least try wearing the white pants, Giants. Normally a decent matchup, but becoming too familiar lately.

7) Saints-Colts: NO in white/gold, IND in blue/white. This isn't that bad, but I think I would have preferred the Saints in black bottoms as opposed to the gold for just a little variety. But somehow to my peepers the gold makes the Colts blue jerseys look more inviting.

6) Buccaneers-Redskins: TB in white/white, WSH in throwback burgundy/khaki. The Bucs do good by going with white trousers in this matchup. The 'Skins? Well, the throwback jersey is indisputably sharp, but the helmet logos and the throwback sleeve logos is just too much to bear for me. They don't match up and the left sleeve logo faces backward not forward. Solution: simply peel off the helmet decals and go plain burgundy. Next time, please.

5) Seahawks-49ers: SEA in alternate gray/gray, SF in red/gold. I suppose this doesn't count as color vs. color in some people's eyes, but it does mine. The Seahawks break out all gray against the Niners again as they did last season. Really, the grays seem to make the neon green pop a little more than the whites do. Pared against the Niners in bright red and gold, it's a not a bad sight. 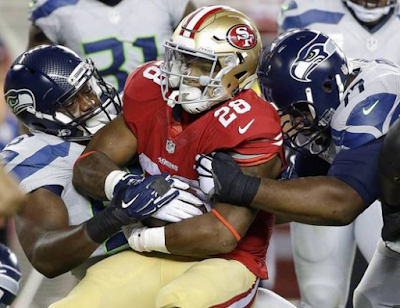 4) Steelers-Chiefs: PIT in white/yellow, KC in red/white. Nothing fancy here, but some solid looking football uniforms. Red and yellow dominate with the proper dosage of Steeler black. One thing Chiefs: don't ever lose the sock stripes. They still hold up very well. 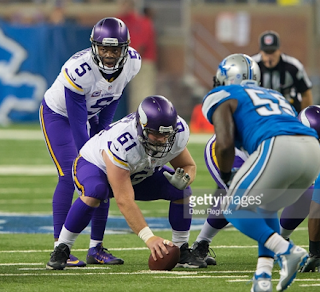 2) Raiders-Chargers: OAK in white-silver, SD in alternate powder blue/white. Whenever the Chargers do the powder blue thing, hearts all across uni-geekdom soar. And maybe it's good that the Bolts use the powders as an alternate. It makes us appreciate the powders even more. They are so cool that they make the usually drab Radiers white over silver combo shine! 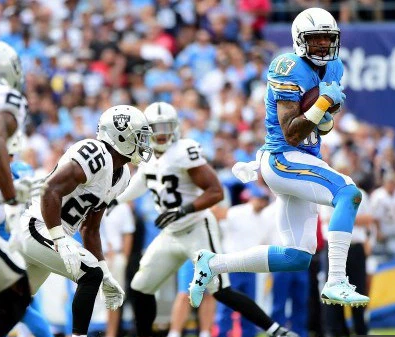 1) Browns-Rams: CLE in white/brown, STL in navy/white. Now, Brownies, this is looking good! Pairing a white jersey/brown pants/orange sock combo is quite eye appealing. And together with the Rams in navy over white and this looks dynamic. 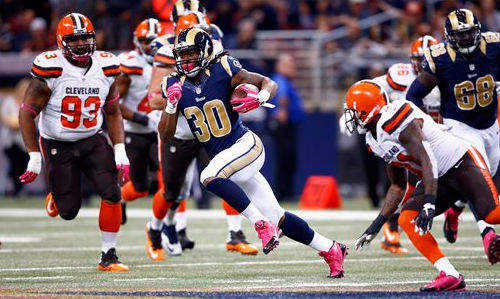 That's a wrap for Week 7. We'll be back next week. Till then...you know the drill!
1 comments

Sorry for the delay, folks.

14) Broncos-Browns: DEN in white/white, CLE in brown/white. I do like the Browns new unis, BUT the numbers must change on the brown shirts! Heck, even if the Browns tried just making only the back numbers white, I would approve, but these are simply illegible from a distance. Is the NFL thought police that rigid with uni changes these days?? 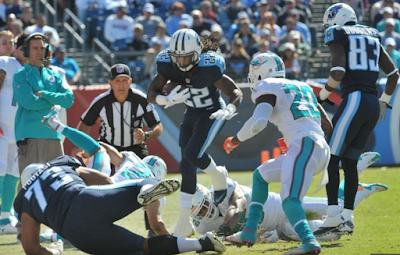 12) Giants-Eagles: NYG in white/gray, PHI in alternate black/black. I just don't understand the Eagles in all black. Had the Eagles gone for the all green look, I would have heartily approved and this matchup would have soared in the rankings. But this just doesn't work in my humble take. Sorry, Giants. You deserved better from your opponent.

11) Texans-Jaguars: HOU in navy/white, JAX in white/black. While not anywhere near my favorite, I do think this is a bit eye-pleasing. The Texans' red stands out in a good way while only a trim color. As for the Jags, a little more teal would go a long way to pump this one a bit higher.

10) Ravens-49ers: BAL in white/white, SF in red/gold. The Niners carry this matchup. Sparkling scarlet and lush 49er gold against a rather drab all white Ravens garb. But it's not enough to keep this from being in the upper ladder.

9) Panthers-Seahawks: CAR in white/white, SEA in navy/navy. The beat goes on. Some good colors at play, silver, black, pale blue, navy blue, gray and neon green. I think this is a middle of the pack matchup.

8) Patriots-Colts: NE in white/navy, IND in blue/white. I way prefer the NE@IND matchup to the IND@NE uni matchups. Here, we see the better Patriots uni combo and the much better Colts uni combo at work. More color, more vibrancy, better presentation. And as a result, higher in the food chain. 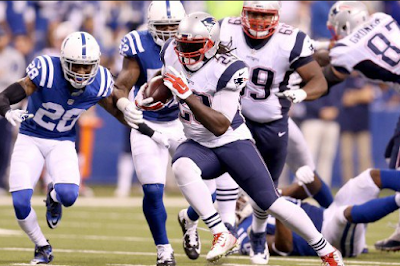 7) Cardinals-Steelers: ARI in white/white, PIT in black/yellow. Normally I would have pleaded with the Cardinals to go with the red pants. But with the healthy red yoke on the Cardinals white jerseys, it is just enough to keep this one from dullsville. Paired up with the Steelers classic black over yellow. it's just enough to make this matchup pleasing.

6) Falcons-Saints: ATL in red/white, NO in white/gold. Traditional rivals and this is good one. Falcons in the black lids with red over white is a plus and I think the Saints called it right with the gold pants. I do like the black pants, mind you, but the vegas gold pants just seemed right for this matchup.

5) Chargers-Packers: SD in white/navy, GB in throwback navy/khaki. The Packers have switched throwbacks this season, from the circle number front of 1929-31 vintage to the Don Hutson era navy jersey from the 1937-48 years. I happen to be a sucker for NOBs that are the opposite of jersey's base color, thus the high ranking. The Chargers compliment the Packs' throwback well with their standard white over navy with the yellow and powder blue trim. 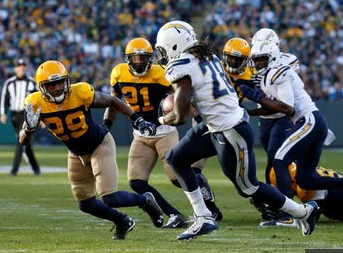 4) Bears-Lions: CHI in white/navy, DET in honolulu blue/silver. The NFC North as a whole has the best unis in the NFL. This clash is a great example why. Ancient rivals in very familiar yet unique color schemes carried out very, very well. pale blue, navy blue, trimmed in orange and silver with a touch of black. Snazzy.

3) Redskins-Jets: WSH in burgundy/yellow, NYJ in white/green. It's something when one uni element - in this case, the Jets pants - can make such a world of difference. Had the Jets gone with their lackluster all white look, this game would have been a major meh. Or maybe a colonel meh. But the Jets in green pants add a spark and verve to compliment the already neat 'Skins burgundy over yellow. 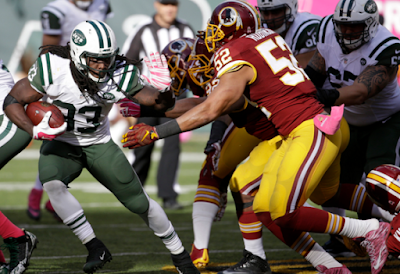 2) Chiefs-Vikings: KC in white/red, MIN in purple/white. Love this one! Purple and red in full flower with yellow standing out in trim fashion from both squads. 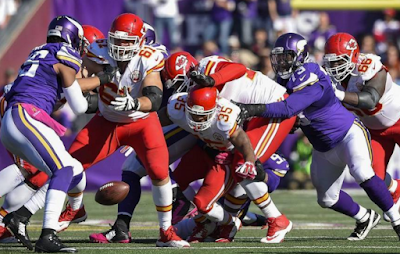 1) Bengals-Bills: CIN in white/black, BUF in blue/blue. If the Bengals had gone with orange socks, this would have easily been my #1 choice. Still, when we get a double dose of blue from the Bills, it excites me a great deal. A lovely matchup. 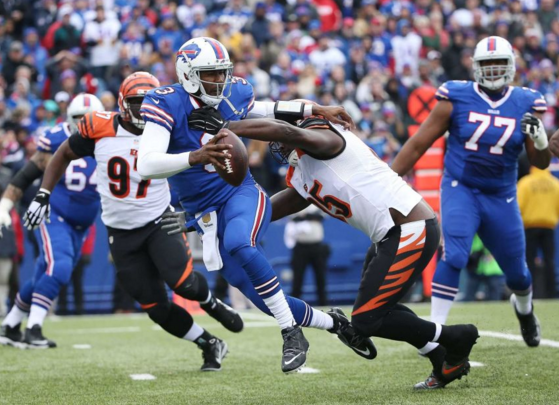 Again, my apologies for the delay in getting this on the blog. I promise to be more timely next week. See ya then!