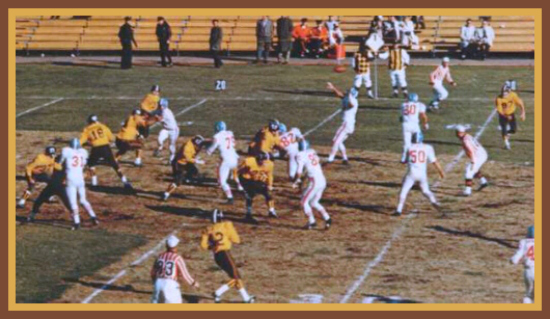 If you’ve been following Uni Watch for any amount of time, you know that on the weekends I enjoy highlighting the many research projects undertaken by UW readers, many of which are the first (and sometimes only) such documentation of important uniform history on the interwebs. On May 8th of last year, the “launch” of the Gridiron Uniform Database was first detailed on Uni Watch. The project is the remarkable collaboration of Tim Brulia, Bill Schaefer, and Rob Holecko.

But as with all historians, Tim & Bill were not satisfied. It had been a long-held belief, as explained below, that the American Football League, which began as competition to the NFL in 1960, featured teams with nameplates (or “Name on Back – NOB”) from the outset (or at least from the beginning of the AFL’s regular season). It turns out that this is not the case — in fact, it’s not just an isolated incidence here or there, but was in fact a league-wide phenomenon.

And so, I turn this over to Tim Brulia and Bill Schaefer, who bring us yet another wonderfully researched dissertation on the AFL NOB:


~~~
A little more than a month ago, we at the Gridiron Uniform Database blogged about a commonly mis-held notion by most pro football fans and historians regarding the American Football League’s team uniforms. Specifically, that the AFL eight charter teams kicked off in 1960 mimicking the innovation earlier that season of baseball’s Chicago White Sox by placing the players’ names on the backs (NOBs) of their jerseys just above the numbers.

Our blog stated that this was definitely NOT the case. We cited and showed several examples of where one or both teams did not have NOBs in game action. We were certain of a few teams that would eventually added the NOBs during the course of the season, but we weren’t sure exactly when the teams in question added the NOBs. Five or so weeks of intensive digging followed, first by Bill, then a little later by Tim. After discussing our findings with one another, we at the Gridiron Uniform Database believe we can can share with all of the Uni Watch faithful and our Gridiron Uniform Database followers, for the first time anywhere (as far as we know), a full chronicle, first by team and then by week, of the evolution of the placement of NOB’s during the course of the 1960 AFL season.

First off, are the three teams who stayed consistent for the entire season.

The Los Angeles Chargers wore NOB’s for the entire 1960 season on both sets (white and blue) of jerseys.

The Denver Broncos (also here) and New York Titans did not wear NOB’s for the entire 1960 season.
Now, the four teams that began the season with no NOB’s, but added them during the 1960 season, with the week the nameplates were added:

Buffalo Bills: The Bills opened the season with nameless jerseys for the first six weeks. The NOB blue jerseys debuted with a home game against the Oakland Raiders on October 23rd. They would not break out their NOB white away jerseys for another three weeks until their next road game at Oakland (well, against Oakland at Kezar Stadium in San Francisco!) on November 13th.

Dallas Texans: Lamar Hunt’s Texans went the first seven weeks of the season nameless. After a bye for week 7, the Texans started their NOB era with a road game in Denver on October 30th, confirmed by a photo found in the Library of Congress microfilm collection of the Denver Post. After another white NOB jersey tilt in Buffalo for week 9, the Texans wore red NOB’s for the first time on November 13 in the Cotton Bowl against the Broncos.

Houston Oilers: This was the one team that Bill and Tim had a hard time firming the handle on. After some discussion, it was determined that the Oilers started the NOB era with their home game at Jeppesen Stadium in Week 3 against the Raiders. The Oilers wouldn’t see the NOB’s on their white jerseys until four weeks later, in week 7 for their next road matchup at the Polo Grounds against the Titans. Part of the reason for Tim’s doubts may have been the difficulty in seeing the plain white lettering on the very light toned columbia blue jerseys as imaged in the newspapers of the day.

Oakland Raiders: The pre-Al Davis Raiders looked very much like the NFL’s Bears. Plain dark helmets, rounded numberals, triple stripes on the sleeves and socks. But that would change in a big way starting in Week 6 when Oakland broke out FULL NOB’s for their October 16th matchup with the Patriots. The names on the back didn’t just say “FLORES” or “SMITH” or “OTTO”, but instead said “TOM FLORES”, “JETSTREAM SMITH” and “JIM OTTO.” Oddly enough, the Raiders would go nameless with the white jerseys for the next two weeks before finally wearing the full NOB treatment in whites for their Friday night October 4th game in Boston.

Finally, the Boston Patriots did something rather odd. For the full season, the Patriots had some players with NOB’s and some players with no NOB’s for all 14 season games!! Really?? True. A very odd arrangement. Tim’s brother-in-law Shawn, a football fanatic and uniform follower, offered up what we think is the best (though unconfirmed) explanation. It is possible that the Pats made the NOB somewhat of a badge of honor by only affixing the nameplate on the 22 starters on offense and defense for the game. The backups would go nameless. Whatever the case, the with/without NOB story is definitely the case.
So, the following is a chronology by week on who wore NOB’s for 1960 (the Patriots will count as NOB’s with a *):


Hopefully, this puts to bed once and for all the “historical” claims that the AFL always had names on the back of the players’ jerseys. From 1961 through 1969, that was the case for all regular season and playoff games. As an interesting sidenote, the AFL All-Star Game, played after each season from 1962 through 1970, ironically never had the All-Stars jerseys with nameplates!


~~~
Thanks, Tim & Bill. All of us in the entire Uni Watch community are grateful for your efforts and those of Rob (and of course, Ricko as well) to bring us up to speed on the history of the American Football League.
0 comments 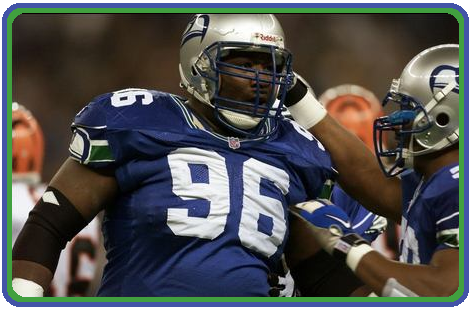 Cortez Kennedy, Hall Of Famer
by Larry Schmitt
Cortez Kennedy was elected to the Pro Football Hall of Fame in his fourth year as a finalist. He is just the second player to be enshrined in Canton that spent his entire career with the Seahawks, joining Steve Largent who was enshrined in 1995.
Kennedy (from the University of Miami, FL) was the third overall player selected in the 1990 NFL draft. More than just a stout player against the run, Kennedy had explosive quickness and a knack for making plays behind the line of scrimmage. He assumed a full-time starting position on the interior defensive line for the Seahawks in 1991 and began a string of six consecutive Pro Bowl invitations. He rouitinely made plays in the backfield, stopping ball carriers for a loss while also pressuring quarterbacks. His 6.5 quarterback sacks were just a prelude of what was to come..
Remarkably, Kennedy's personal best season came in the franchises worst. The 1992 Seahawks had the NFL's worst offense. They ranked last in total yards from scrimmage and last in points scored (averaging 10 points per game, they were shut out twice and never scored more than 17 points in a single game.) Despite their futility 2-14 record, the defense played tough and Kennedy was dominant. Despite playing from behind in most games in the 2-14 season, he compiled 14 quarterback sacks and four forced fumbles. Also, although an unoffical statistic, team records credit Kennedy with 93 tackles, including 41 for a loss. He was honored for his outstanding season with the NFL's Defensive Player of the Year award, and was only the third player in history to receive such recognition from a losing team. It was also his first of three consecutive selections to the NFL's All Pro team.
Unfortunately, that theme would continue for most of his career. His personal success and recognition was achieved on mostly mediocre teams. Over his 11 seasons in Seattle, Kennedy was named All Pro three times and played in eight Pro Bowls (making him the second most decorated Seahawk after Walter Jones), but the team only finished with a winning record twice and qualified for the playoffs just once.
A knee injury shortened Kennedy's 1998 season and ended his club record 100 consecutive starts. He rebounded with a strong season in 1999 as he regained his Pro Bowl form. His veteran leadership inspired a defensive unit that finished in the league's top 10 in points surrendered. Kennedy had 6.5 sacks and two interceptions during the season and helped Seattle to a 9-7 record and the AFC West Division Championship, as Seattle qualified for the post season for the first time since 1988.
Kennedy played one more season before retiring after the 2000 season. His 58 sacks rank fourth all time in Seahawk history, and his overall high level of impact play saw him honored with inclusion on the NFL's All Decade team of the 1990's.
http://www.pro-football-reference.com/players/K/KennCo00.htm
0 comments