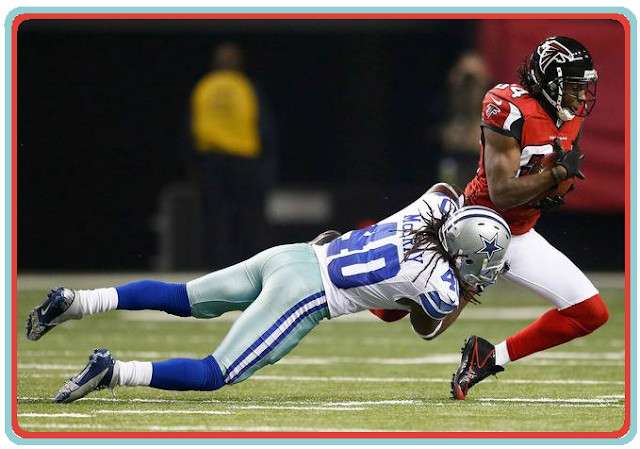 #14. Dolphins-Colts: MIA in all white, IND in blue/white. Dolphins, c'mon, man! The all white could have made the grade for this matchup. As it is, the Colts blue and white have to carry this matchup, and it is a burden. Actually, the colors - other than white - aren't all that bad. Aqua, orange, blue are a decent blend of hues. It's just a dominance of white that derails things here.

#13. Lions-Jaguars: DET in white/silver, JAX in all black. Lions are fine in this get together, but the Jags full on black look is just bleah. White pants would help some, but this is just not the Jaguars.

#12. Buccaneers-Raiders: TB in white/pewter, OAK in black/silver. No surprises here. Metals at work with silver and pewter on the helmets and pants. While these are nice colors (add some Buccaneer red), I'm just not feeling it for this matchup. Myabe a little rich on the black, but the colors are not calling my name. 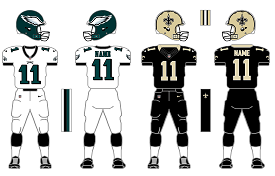 #11. Eagles-Saints: PHI in all white, NO in all black. The Eagles toss a curve into this matchup with white pants, the Saints with all black, not too surprising.Philly usually goes all white in the preseason, so this was a surprise, but actually, a little disappointing. We could have had four base colors at work here; white, green, black and gold. Alas, we get all white and all black. Not very colorful, eh?

#10. Cardinals-Packers: ARZ in all white and GB in green/yellow. The Cardinals have yet to rock the red britches, and that's a hurt for this encounter. Packers always sharp in the green and yellow, more red from the Cardinals would have skewed the ranking upward.

#9. Broncos-Bengals: DEN in all white, CIN in black/white. Broncos in the roadies with largely blue trim and the Bengals in the conservative (for them) black jersey with white pants. I think one little change could have sparked a few brownie points, and would have been orange socks. That would put a little sparkle in a surprisingly blah matchup.

#8. Bears-Titans: CHI in white/navy, TEN in light blue/dark blue. This one blues, ha ha. Anyway, the Titans seem to have too much blue on lately. Since I like the Bears navy pants too much, I think the Titans could have worn white pants (if they still have them) to offset all of the navy running around here.

#7. Chiefs-Chargers: KC in white/red, SD in navy/white. This is a traditional AFC West matchup with no surprises. And it is a very nice one. red, navy, white with hints of yellow and powder blue. I like it.

#6. Ravens-Browns: BAL in white/black and CLE in brown/white. This is actually a sweet look. Ravens do the right thing by wearing black pants. Add some pop to this matchup. Browns in brown at home and this as it should be. Good one.

#5. Vikings-Seahawks: MIN in all white, SEA in all navy. The Seahawks go all navy again and the Vikes with the standard all white with the purple accoutrements. It's actually a good color get-up. With a hint of yellow, "action" green and that touch of gray. One of the better ones for this week. 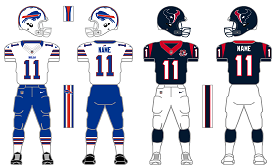 #3. Bills-Texans: BUF in white/blue, HOU in navy/white. Whenever the Bills rock the blue pants, the matchup is elevated in the food chain. Texans always look sharp in their home outfit, so this one belongs in the top shelf of the rankings. 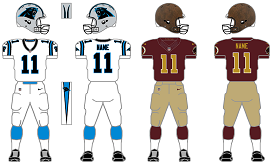 #2. Panthers-Redskins: CAR in all white, WSH in throwback burgundy/khaki. Something about the Panthers brings out the throwback in their opponents. The Redskins are the third team (Falcons, Bears) to go retro against the Panthers this season. The Skins break out their circa 1937-38 oldies for this one. The Skins actually wore gold helmets and gold pants in those years, but their treatment of the faux natural leather helmet is absolutely spot on and the Skins get more that a free pass for that, they get high marks. It works coolly against the black and carolina blue of the Panthers.

#1. Cowboys-Falcons: DAL in white/mint, ATL in red/white. This one surprises me. I like it a lot. I don't know why, because normally by themselves, these two looks aren't impressive. But together, I guess the mixture of  blue, mint, red, black works as a really sweet matchup. It's been 8 weeks since we began this journey and now we've made it to the last division in our odyssey.

The AFC South
– I went with opposite versions of the navy and red jerseys. The white helmet with opposing blue and red stripes works equally well with either combination. 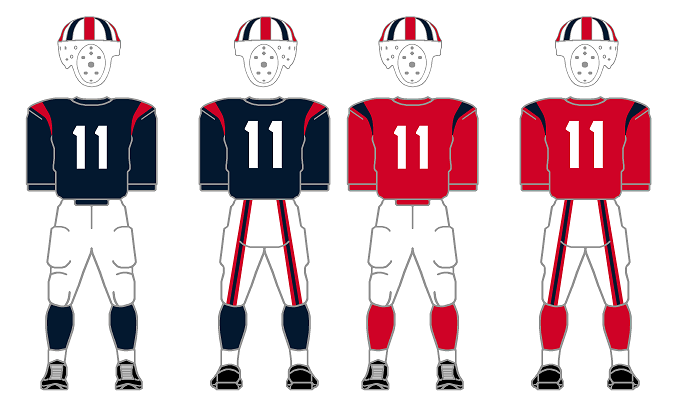 – Why couldn’t Nike have fixed the Colts?  I mean how hard can it be to construct the over-the-shoulder loop stripes? Well, we’ve got them here.  I almost went with a straight white helmet but sanity took over and I added some blue to it.  Going back to a blog I wrote a year ago about my personal feelings towards mono-white uniforms, I said there is no way to mess up a 2 color uniform when one of the two colors is white. I stand by my comment here. 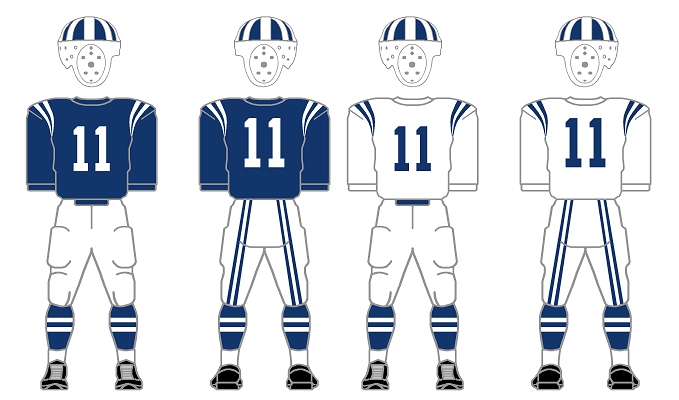 – Again, black? In ? It needed to go so I ditched it. This left me with teal (Ick.) and gold from their current logo. I actually think if these were their jerseys, the Jags would eventually switch to the gold as their primary. The teal tends to look like the poor man's Dolphins. 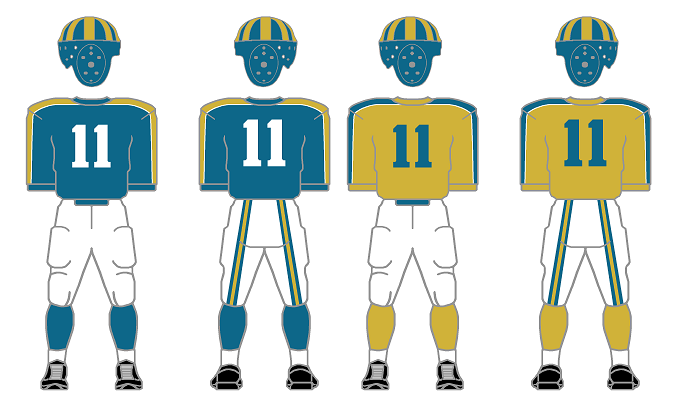 –  Ah. The team that started it all. When I first did a Titans jersey here, it ended up looking like the New York Bulldogs. Nobody wants that. Instead, I opted for the 2-tone blue design with navy as the primary. Those were the original Titans jerseys and I still prefer them to the current primary with the reverse pattern. I kept the reverse pattern, however, as the secondary jersey. I adjusted the futuristic number font to something similar but a better fit for the times. 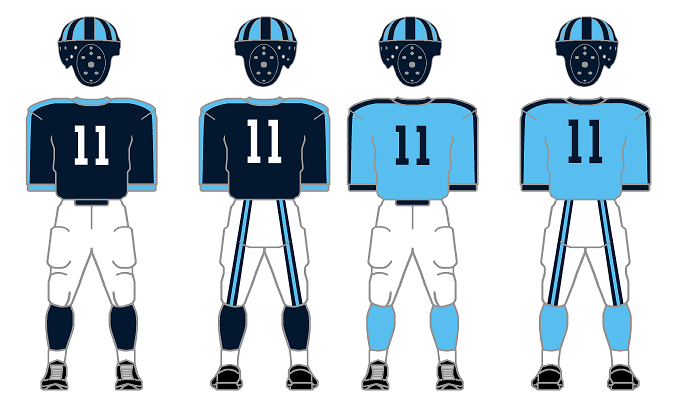 And so, my friends, we come to the end. Without a doubt, if you’d have turned on your HD plasma screen TV back in the 1940s, you’d have seen these combinations every Sunday from September through January.

I'll be debuting a new series of "what if's" next week so tune in!
Bill Schaefer
1 comments