A Head-To-Head History: The Giants and The Buccaneers 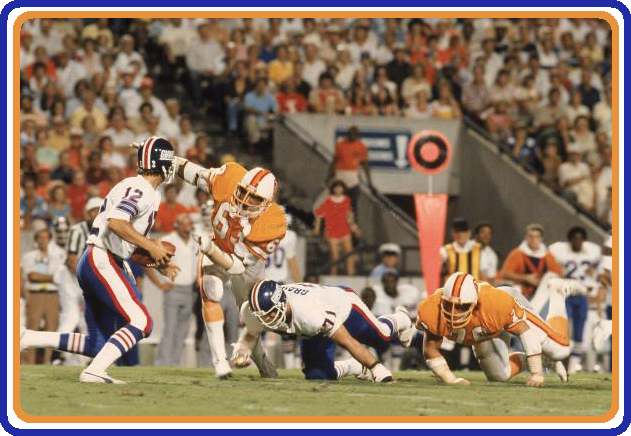 Larry Schmitt, who wrote for us this past summer a great series looking at matching rivals, returns with a new weekly series called "A Head-To-Head History" where each Friday we will take an in-depth look at the head-to-head history of two of the teams scheduled to meet each week.  While the most prolific head to head series, the Bears and the Packers, met last night for the 183rd time, we will begin this series today with a look back at the history of the Tampa Bay Buccaneers (my favorite team) and the New York Giants (his).

Infrequent meeting these days, there was a time when the Tampa Bay Buccaneers and the New York Giants, although never in the same division, knew each other as well as their regular division foes.

Tampa Bay joined the NFL in 1976 as a member of the AFC West. A slight course correction in geography moved them a little closer to home in 1977 as they relocated to the NFC Central. In the days of the 28-team NFL, each conference had two five-team divisions and one four-team division. To balance out each teams 16-game schedule, the last place teams from the five-team divisions would face one another twice the following season.

Being an expansion team prior to free agency, it was expected for Tampa Bay to struggle for wins for some time as they built their team patiently though the draft. The Giants were mired in a decade of despair in the 70's, regularly finishing with records tallying losses in double-digits. Hence, following their initial meeting in 1977 (the Buccaneers 23rd consecutive loss since joining the league), they would meet four times over the next two seasons.

After having spent their inaugural season wearing their white jerseys, Tampa Bay broke out their Florida Orange jerseys in '77 and kept them as their home choice into the mid '80's. When the 3-5 Giants arrived in Week 9 they were sporting the most atypical uniform set of their mostly conservative and traditional history. Whoever designed New York's 1975 - 79 uniforms sure did like stripes! The tone of royal blue was also brighter than in past years, which really stood out on the blue pants they wore with their white jerseys.

The combination of the white-helmeted Buccaneers with their Florida Orange jerseys and the Giants royal blue helmets and pants proved complimentary and works quite well. Unfortunately, both teams finish at the bottom of their divisions and would have a rematch on opening day in Tampa Stadium in 1978. In October the Buccaneers made their first trip to The Meadowlands. The red numbers on the Buccaneers nearly all white uniforms stood out in their predominantly blue surroundings. Both teams had dismal years, but things began to turn upward for Tamp Bay. The next meeting in 1979 featured the surprising 5-0 Buccaneers visiting the 0-5 Giants. This was New York QB Phil Simms first start and he would manage the Giants to a 17-14 upset victory {Simms finished the game 6-12 for 37 yards, but no turnovers}. The rematch in Tampa saw the Bucs first win over New York come in convincing fashion with a 31-3 win on their way to a 10-6 NFC Central crown and playoff birth. By this time, the Giants had mothballed their blue pants, but seemingly quadrupled their sock stripes.

The 1980 rematch saw the Giants turn the clock back as they removed the white stripes from the helmets. The blue-red-blue pants stripes and sleeve trim and solid blue socks were identical to New York's pre 1975 uniform. The on field results did not change however as Tampa Bay romped again. 1984 saw a home-and-home square off between the teams for a final time. The first meeting in New York featured Lawrence Taylor terrorizing Tampa Bay QB Steve DeBerg with four sacks, but James Wilder helped exact revenge with a 99-yard effort in Tampa Stadium.

Since 1985 the Giants and Buccaneers have met 10 times. Nine of those meetings have featured the Giants in blue and the Bucs in white, even though only five of those games were in The Meadowlands.  They met three consecutive years beginning in 1997, the first year of the pewter and red Buccaneers. There were all defensively dominated games. Warren Sapp, Derrick Brooks and John Lynch had the upper hand as they did not allow the Giants offense to score a single TD over 12 quarters of play! The Giants managed to win the third game of the series with two defensive returns in a 17-13 opening day win in 1999 (helped by a horrible performance by Trent Dilfer which saw him booed off the field), as the Giants wore a 75th anniversary patch on their royal blue jerseys.

When they met again on a Monday night in 2003, the Giants wore their white jerseys in Tampa Stadium for the first time in 19 years. Of course, the Giants had a very different by then, with the "ny" logo on the helmet, grey pants and blue-trimmed red numbers on the stripe-less white jerseys. The defending Super Bowl Champion Buccaneers handed the Giants a loss again without surrendering a touchdown defensively. The Giants lone touchdown in the 19-13 game was a 4th quarter INT return.

The 2006 meeting in Giants Stadium was hyped as the final on-field meeting between the Barber brothers as Giants HB Tiki had declared the remainder of the season would be his personal farewell tour just a week earlier. Defenses ruled yet again on this cold and blustery day - the teams combined for just 148 yards passing - but the Giants came out ahead 17-3 as their offense found the endzone twice.

The first, and so far only, post season meeting between New York and Tampa Bay occurred in the 2007 Wild Card game at Raymond James Stadium. As has been their trend since the early 90's, the Buccaneers chose white jerseys for the afternoon contest. Eli Manning, supported by the Giants ferocious pass rush, lead the Giants to their 8th consecutive road victory on their way to Super Bowl XLII.

When the teams met on a rainy day in September 2009, Tampa Bay again went white at home, but both teams changed up their pants. The Buccaneers wore their white alternates, and the Giants wore their "five-stripe" pants that had previously been worn only with their white jerseys.

This Sunday at Met Life Stadium we can be assured more of the same. The Giants will undoubtedly have on their home blues (the "five-stripe" pants are now their only set) with the Buccaneers wearing white, and defensive stars like Justin Tuck and Rhonde Barber will wreak havoc on the opposing offenses. 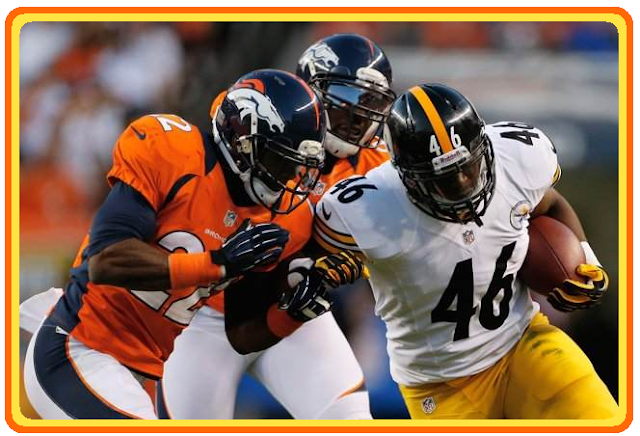 Welcome back to the 2012 edition of the GUD's weekly uniform rankings.

#16. Falcons-Chiefs: Lotta red here, but most of it is KC red. ATL red is but a trim color. Chiefs, like the Bears, are giving the sleeve stripes more notice by moving the TV numbers from the sleeve to the shoulder. I'm not seeing a lot of cool colors here, an OK matchup.

#15. Patriots-Titans: The Titans are one of many teams that like to go white at home (WAH) early in the season before switching to the darks, mostly for "hot weather" reasons. This forces the Patriots to go dark blue. Titans chose to wear their columbia blue pants. This isn't a bad matchup, just not one that gives me color sensations.

#14. Jaguars-Vikings: Again, little change from the Reeboks to the Nikes, but honestly, not a very exciting matchup. Jags should have opened up the teal more with this set, but alas. The Vikes purple does work for me. The matchup is average.

#13. Bengals-Ravens: Purple and black against orange and black, plus a lot of white. A pair of black pants on one of these teams, and I think it would have been in my Top 5. But alas, it's an early season gig, so the likely reason both are in white pants.

#12. 49ers-Packers: "America's Game of the Week," or so Fox shamelessly says (although they apparently say that about all 4:25 games.)  This one just wasn't quite "America's Uniform Matchup of the Week." Still, a lot of the traditional look. Bright red and gold trim on the Niners away unis and the Pack strutting the familiar green and gold look.

#11.  Colts-Bears: The Colts with no change from 2011, while the Bears place the TV numbers from the sleeves to the shoulders, creating much needed space for the sleeve stripes. Works well, and while a tad dry, a ton of traditional for these two long time NFL squads.

#10.  Cowboys-Giants: The season lidlifter features the defending NFL Champions against a worthy opponent. The Giants are now wearing the gray separated striped pants full time. The Cowboys have the same basic look. The Cowboys continue the "fifty shades of grey" look with the bluish helmets and the greenish (my wife calls them "minty") pants. A traditional look. The Giants, staying modest, did not have a "Super Bowl Champions" patch. Nice, but not eye popping.

#9. Eagles-Browns: There was some buzz that the Browns were going to wear brown for this encounter, but not to be. The Eagles went with green (which - at least to me - seems not quite as dark as in previous years) and the Browns went with the full white treatment. Not a bad matchup. Guess we'll have to wait later in the season for the Browns to wear their namesake.

#8. Rams-Lions: The Rams decided to ditch the gold pants, which has some in despair. And perhaps it would have been nice to see them here. But, for a weird reason, I like this all white look for STL. And with the Lions in traditional honolulu blue and the silver fixin's, this matchup happens to agree with me.

#7. Chargers-Raiders: Chargers in white/navy with the Raiders in black/silver. Rather predictable, but in this case, it's a good match. Good colors and they mix decently.

#6. Bills-Jets: Bills in year two of the uniform reform. The Jets, going all white at home, socks included. Love how the Bills blue really sparkle, it's a perfect shade. The Jets all whites somehow works here in a matchup that hearkens back to the 1965-72 era. It does work.

#5. Seahawks-Cardinals:  Still unsure where I fit into the Seahawks new look. This combo is a nice one. Just a little uncomfortable with the Nike gang making the swoosh the focal point of the sleeve. The Cardinals rock the red. On a color scale, one of the better uni matchups for Week 1.

#4. Dolphins-Texans: The Texans have traditonally opened their home seasons with an all-white look. This means that the Dolphins have to wear their aqua jerseys and the unusual combo for the both teams is a pleasant change. What could have made this matchup possibly the best for Week 1 is if the Texans would have worn the rare red pants, or even red socks. Still, a nice change for me.

#3. Panthers-Buccaneers: Whenever Carolina rocks the carolina blue jerseys, it's just plain magic. Paired up with the Bucs in white/pewter, it's a great matchup. I just like this setup a lot.

#2. Redskins-Saints: This is a beauty. Saints going white at home and the Redskins have to wear the burgundy. Not counting the mashup of striping combos on the Skins, Washington is wearing the yellow pants with the burgundy socks loaded with striping. The Saints, trotting out the faded vegas gold pants, and this just gives me a visual joy to look at.

#1. Steelers-Broncos: For the first time since 1996, the Broncos are using orange as the base jersey color for home games, and it's long overdue. 5 different colors at play here; black. navy, white, yellow and orange. Bright and sunshiny. A great uni matchup!

What do you think?  Agree or disagree with these uniform matchup assessments?  Let us know in the comments.  Which game do you think will be the best looking game in Week 2?  Check back with us next week to find out in the next installment of the GUD's Weekly Uniform Rankings!
0 comments