Note: We've been busy at The Gridiron Uniform Database Blog this week and haven't been able to bring you articles daily as we would have liked.  Tim's Trivia Questions will continue to appear, and while we intended on running one every day this week, we just haven't been around to write for the blog everyday.  We hope you understand, and we'll give you three questions in today's entry.

Super Bowl XXXVIII was played eight years ago yesterday, on February 1, 2004.  Played in Houston, it was on the one year anniversary of the Space Shuttle Columbia accident, and it also came to be remembered for the "Janet Jackson wardrobe malfunction" that occurred at halftime.

But perhaps instead this game should be remembered instead for the most exciting 15 minutes of Super Bowl football ever played.  At the beginning of the fourth quarter the Patriots led 14-10, and the two teams combined for thirty-seven points in the fourth, and an exciting 32-29 Patriots victory.  Wikipedia summarizes the fourth quarter as thus:


Beginning wiith 3:57 left in the third period, the Patriots put together a 71-yard, 8-play scoring drive, featuring tight end Daniel Graham's 33-yard reception to advance to the Carolina 9-yard line. Running backAntowain Smith then capped off the drive with a 2-yard touchdown run on the second play on the final period to increase their lead, 21–10. This was the start of another scoring explosion, one that became one of the biggest explosions in Super Bowl history, with both teams scoring a combined 37 points in the last 15 minutes, the most ever in a single quarter of a Super Bowl.
Delhomme started out Carolina's ensuing drive with a 13-yard completion to wide receiver Muhsin Muhammad. After committing a false start penalty on the next play, Delhomme completed a pair of passes to Smith for gains of 18 and 22 yards. Running back DeShaun Foster then scored on a 33-yard touchdown run, cutting the Panthers' deficit to 21-16 after Delhomme's 2-point conversion pass fell incomplete. The Patriots responded on their ensuing possession by driving all the way to Carolina's 9-yard line, but the drive ended when Panthers defensive back Reggie Howard intercepted a third down pass from Brady in the end zone. Then on 3rd down from his own 15-yard line, Delhomme threw for the longest play from scrimmage in Super Bowl history, an 85-yard touchdown completion to Muhammad. Carolina's 2-point conversion attempt failed again, but they took their first lead of the game, 22-21, with 6:53 remaining. It was the first time in Super Bowl history a team down 10+ points during the 4th quarter had come back to take the lead. Two other times teams came back to tie the game; the Tennessee Titans against the Rams in Super Bowl XXXIV and the Rams against the Patriots in Super Bowl XXXVI.
However, New England retook the lead on their next drive, advancing 68 yards with the aid of a pair of completions from Brady to Givens for gains of 18 and 25 yards. Once again the Patriots were faced with third down and goal, but this time they scored with Brady's 1-yard pass to Vrabel, who had lined up in an eligible tight end position. Then on a two-point conversion attempt, running back Kevin Faulk took a direct snap and ran into the end zone to make the score 29-22. Despite amassing over 1,000 combined yards, Kevin Faulk's two-point conversion constituted the only points he scored all season.
The Panthers countered on their next possession. Foster started the drive with a 9-yard run and a 7-yard reception. After that, Delhomme completed a 19-yard pass to Muhammad, followed by a 31-yard completion to receiver Ricky Proehl. Then Proehl, who caught the fourth quarter game tying touchdown pass against the Patriots in Super Bowl XXXVI 2 years earlier for the St. Louis Rams, finished the drive with a 12-yard touchdown reception. Kasay's ensuing extra point tied the game, 29-29, with 1:08 to play in regulation and it appeared that the game would be the first Super Bowl ever to go into overtime.
However, Kasay kicked the ensuing kickoff out of bounds, giving New England the ball on their own 40-yard line. Brady calmly led the Patriots offense down the field with a 13-yard pass to Brown on second down. An offensive pass interference penalty on Brown pushed New England back to their own 43-yard line, but another 13-yard reception to Brown and a 4-yard pass to Graham brought up a critical 3rd down and 3 from the Carolina 40-yard line. The Panthers defense could not prevent the Patriots from gaining the first down, as Brady completed a clutch 17-yard pass to Branch. On the next play, Vinatieri kicked a 41-yard field goal to give New England the lead, 32-29, with four seconds left in the game. Carolina failed on their last chance, as Rod Smart went nowhere on the ensuing kickoff, and the Patriots had won their second Super Bowl in three years. This was the fourth Super Bowl to be decided on a field goal in the final seconds. Super Bowl V was won on a last second kick by Jim O'Brien, Super Bowl XXV had Scott Norwood miss his field goal chance, and in Super Bowl XXXVIII, Adam Vinatieri made his.

We are proud to add this game to our database of NFL matchups.  There has never been a Super Bowl played on February 2, however in two years, the NFL will play the first outdoors, cold-weather site Super Bowl with Super Bowl XLVIII scheduled to be played at MetLife Stadium in East Rutherford, New Jersey, home of the Jets and Giants, on February 2, 2014. 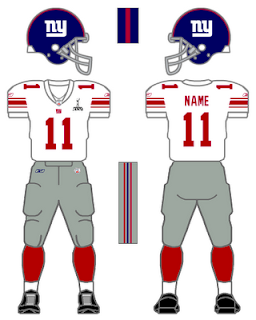 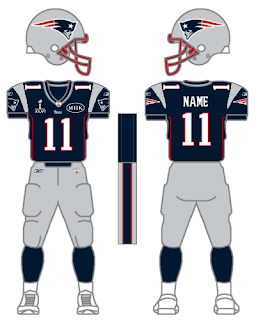 Tuesday was Media Day at the Super Bowl, and in answering the media's various and disparate questions, the players of both teams, the Giants and the Patriots, wore their uniforms with the Super Bowl patches, and displayed for the first time what they will be wearing when they take the field Sunday.
While we won't officially add the uniforms for Super Bowl XLVI to the database until kickoff, we can go ahead and offer a sneak peek and display them for you today in our blog.  The Giants will again be the road team, and the Patriots the home team, so visually the teams will look a lot like they did when they met in Super Bowl XLII.  The league alternates Super Bowl years between the NFC and AFC Champion being the home team.  This is similar to Super Bowls X and XIII, when the Steelers and Cowboys met both times in Miami.  The Cowboys were the home team in XIII, while the Steelers were the home team in X, but whichever year the two teams met, the Cowboys would have worn white and the Steelers black, because the Cowboys generally wore white at home, although they did wear blue in Super Bowl V, when they faced the Colts.  The only visual difference between Super Bowls X and XIII was that X was played during the day, and the Orange Bowl still had astroturf.  By Super Bowl XIII, the NFL was playing the Super Bowls at night, and the Orange Bowl had switched to a grass surface.
~ ~ ~ 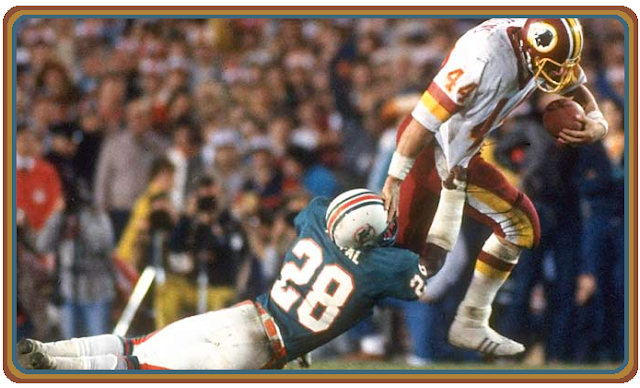 We resume our look back at past Super Bowls that we are adding to our database by taking a look at Super Bowl XVII.  Super Bowl XVII was played on January 30, 1983.  This was the latest a Super Bowl had ever been played.  The players' strike had resulted in a loss of seven weeks of games during the season and the ninth and final week of regular season games were played in the first weekend of January.  With teams playing shortened schedules, not all teams played the same amount of divisional games, so they abandoned divisions and just seeded the top 8 teams in each conference 1-8 and played a sixteen-team tournament, with the Championship being Super Bowl XVII.

The Washington Redskins and Miami Dolphins reached this game, and the 'Skins rushing attack of John Riggins behind one of the greatest offensive lines ever, known as the "Hogs", and also led by QB Joe Theismann and season MVP K Mark Moseley, won the game 27-17, with Riggins breaking for a touchdown on a key fourth down late in the game. 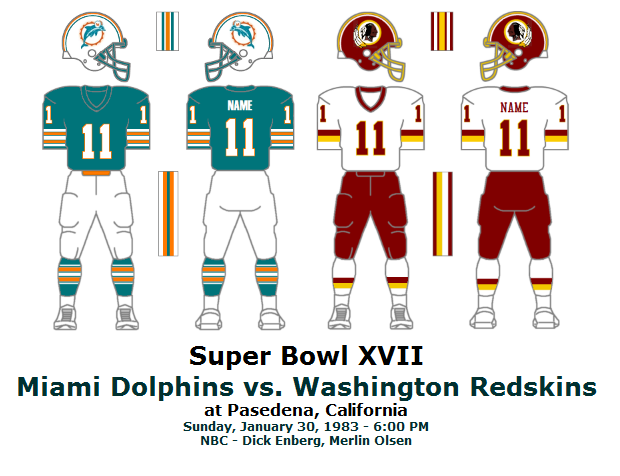 We are proud to add this game to our database. 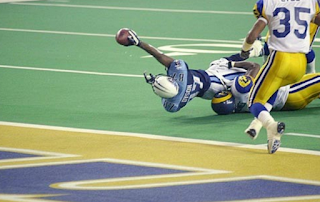 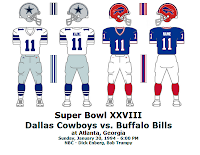 Two later Super Bowls were also played on January 30, in 1994, the Dallas Cowboys won their second of two back-to-back championships, beating the Buffalo Bills in Atlanta for the second year in a row in Super Bowl XXVIII

Six years after that, the St. Louis Rams culminated their fantastic 1999 season, also in Atlanta, by stopping Kevin Dyson one yard short of the end zone and defeating the Tennessee Titans 23-16 in Super Bowl XXXIV. 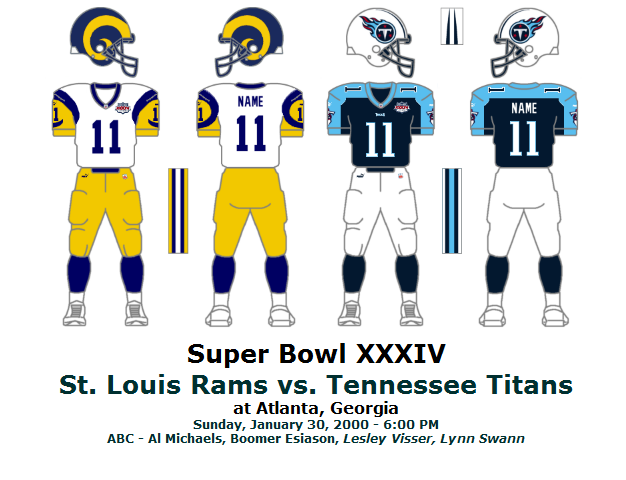 These Super Bowls also are now in our database.

And now, we are also proud to debut a new segment that will run all week leading up to the Super Bowl.  It's a daily Super Bowl trivia question brought to you by our website historian, Tim Brulia.  It's called, "Do You Know As Much As Timmy B?"  Here's Tim with the first question:

What four instances did the "home" team of the Super Bowl NOT wear the home jersey that they normally wore that season? Bonus: can you tell me why?
Put your guesses in the comments and look for the correct answer and another question tomorrow!

~ ~ ~
Well, we'll be back tomorrow with more exciting Super Bowl related content, including another trivia question and Tuesday is also Media Day, and we'll be unveiling here in the blog the uniforms the Giants and Patriots will be taking the field in Sunday.
2 comments