Well, we've been sort of on vacation around here at the Gridiron Uniform Database Blog, but here are the entries to vote of for Part 5 of the Best NFL Uniform of All Time tournament.

This has been written up in advance, so Part 4 results aren't available yet, but go ahead and vote on Part 5: 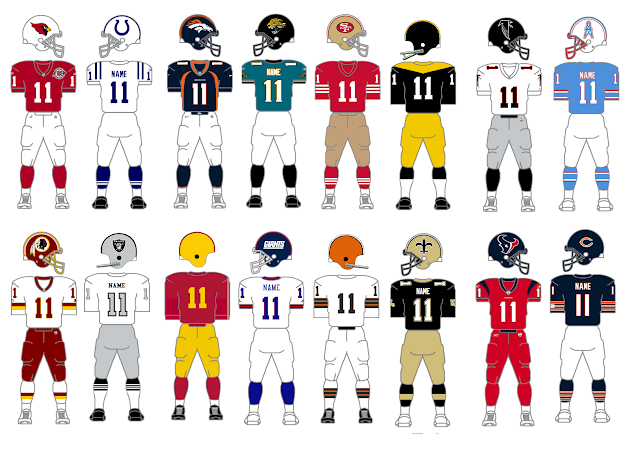 Matchup #25: 1998 Arizona Cardinals vs. 2004 Indianapolis Colts.  This matchup features the red-over-white basic uniform combo the Cardinals wore from their early years in St. Louis all the way through their redesign after the 2004 season.  The Colts' basic home white variation is also a classic -- it is the same uniform they have worn since 1957 from the Johnny Unitas era through the Peyton Manning era.  Vote here.

Matchup #26: 1999 Denver Broncos vs 2001 Jacksonville Jaguars.  The classic example of a redesign helping the fortunes of a team, the Broncos switched to this set in John Elway's final two years and won two Super Bowls and have kept it ever since.  The Jaguars eschewed this uniform set after the 2008 season, and this original teal-over-white combo represents the 1995-2007 era.  Vote here.

Matchup #28: 1991 Atlanta Falcons vs 1987 Houston Oilers.  The Falcons ushered in the Jerry Glanville-Deion Sanders era by changing to a predominately black design and left two tickets for Elvis at Will Call.  The Oilers, who had many different combos throughout their first two decades, stuck with the basic Oiler Luv Ya Blue combo from 1979 until leaving for Tennessee after 1996, even keeping this design for two years (although they only wore white in 1998) as the Tennessee Oilers.  Vote here.

Matchup #29: 1991 Washington Redskins vs 1964 Oakland Raiders.  This Redskins' white-over-maroon is another classic, having worn it from 1979 through the present, it has seen multiple Super Bowls under Joe Gibbs with three different quarterbacks: Theismann, Williams and Rypien.  The Raiders in 1963-64 and again in 1970 used silver numbers with black outlines on their road whites, a design they resurrected for their 2009 throwbacks.  Vote here.

Matchup #30: 1947 Chicago Rockets (AAFC) vs 1993 New York Giants.  The Rockets - a team that only played three years in a defunct league, wore yellow pants in only the middle year, while donning white pants in 1946 and 1948.  This red-over-yellow combo represents the Rockets' entire existence, however.  The Giants, who dropped the blue pants after the 1978 season, went only mono-white whenever wearing their white jersey, which lasted until the next resign in 2000.  Phil Simms, Lawrence Taylor and company won two Super Bowls during this era, however, an injured Simms was replaced by Jeff Hostetler in one of them.  Vote here.

Matchup #31: 1964 Cleveland Browns vs 1987 New Orleans Saints.  The classic white-over-white period this uniform covers is from the removal of numbers from the helmets after the 1960 season, through the adoption of the orange pants in 1975.  While they worn similar combos at other times in their existence, the 1961-74 era of Jim Brown and a 1964 NFL Championship is represented here.  They will face the Bobby Hebert era Saints, the black-over-gold uniform combo with the state of Louisiana on the sleeve.  They wore this set from 1986-1995, changing from white pants to gold in '86, and replacing the Louisiana logo with the Fleur-de-Lis in 1996.  Vote here.

Matchup #32:  2009 Houston Texans vs 1985 Chicago Bears.  The Texans, which began wearing a "battle-red" third jersey in their second season in 2003, adopted red pants as well for this mono-red look which they have worn annually since 2007.  The Bears had one of the best seasons in NFL history in 1985, and this uniform, their classic navy-over-white home look represents the same combo they've worn at home since the fifties, with the exception of throwbacks, an attempt at a mono-navy combo, and a handful of White At Home™ appearances since 2005.  Vote here.
1 comments