14) Colts-Falcons: IND in white/white, ATL in red/white. The Falcons nice triple color play (black, red, white) can usually fend off some not so good opponents. Not so much here. The Colts blue trim salvages some pride, but the heavy white dose seems to overwhelm the Falcons look. 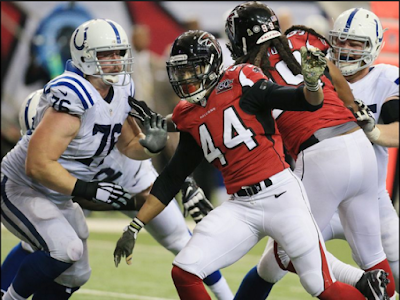 13) Bills-Patriots: BUF in white/white, NE in navy/silver. The Bills go with the all white for Monday night and that's a blow for the colorways. What saves this from the bottom? The Bills have some red with the blue and the Colts do not. Pats with the usual navy over silver, and that suffers a bit with the Bills decision to go all snow.

12) Raiders-Lions: OAK in white/silver, DET in honolulu blue/silver. Not sure what could have been done here. Just way too much silver for my taste. The Lions nifty jerseys help a lot or this one would have been shoddy.

11) Bengals-Cardinals: CIN in white/white, ARI in red/white. Hmph. In recent memory, when team that have dark pants in the closet, they usually burst forth for primetime. This time, we could have had at least the Bengals in black pants or the Cardinals in all red, or both. Alas, both chose to go with their (by comparison) white trousers. It's usually right about now that the Cardinals go red below the waist. A great big missed opportunity.

10) Broncos-Bears: DEN in white/white, CHI in navy/white. The Broncos' navy is slightly brighter than the Bears' navy. Orange could have and should have (somehow) been more exposed here. I don't know how, unless the Bears would have gone WAH and then the Broncs could have sported their orange shirts. Never mind.

9) Buccaneers-Eagles: TB in white/white, PHI in green/white. More white than I'd like to see here. Could have had the Bucs in pewter pants and/or the Eagles in green pants. It could have been and yes, should have been better than this.

8) Cowboys-Dolphins: DAL in navy/silver, MIA in white/white. The Bad: The Dolphins in the dreaded all whites that look more and more yawnish with each passing week. The Good: The Cowboys are again forced to wear their so much better than white combo. The snappiness and consistently colored color set of the Cowboys saves this matchup from the bottom drawers. 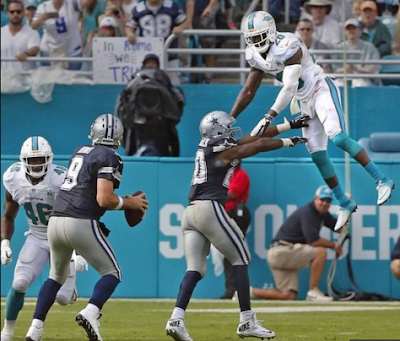 7) Titans-Jaguars: TEN in color rush columbia blue/columbia blue, JAX in color rush gold/gold. The second installment of the NFL's (and Nike's) color rush campaign features one team in a combo we've mostly seen before (the Titans) and one which we haven't seen before (the Jaguars). Perhaps because the Titans have been down this road before, the focus to me was on the Jaguars' mustard colors. I enjoyed them, and the split black/gold helmet actually worked in this instance. I thought it looked sharp, but the thing that saddened me is that the Jags' once distinctive teal has now been reduced to an afterthought. The Titans all pale blue bounced off nicely. So, not too bad a matchup to these eyes. 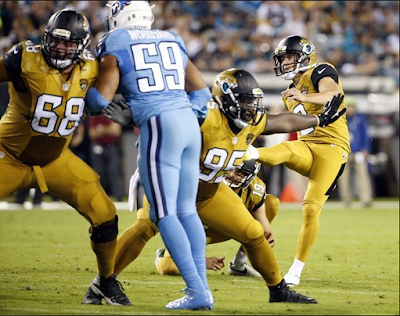 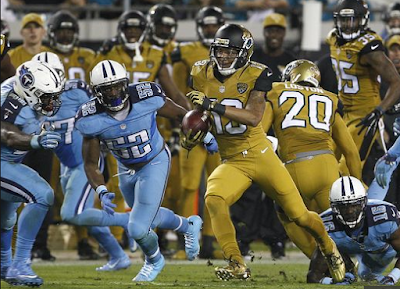 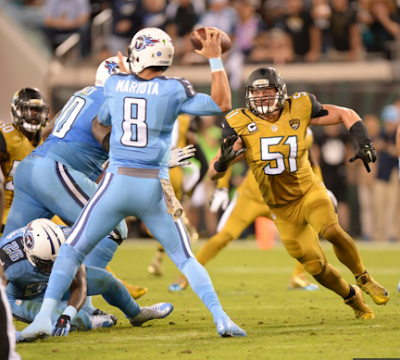 6) Redskins-Panthers: WSH in white/yellow, CAR in black/silver. With so much love for the Panthers in all-black, they continue to force feed us with the black over silver. All black would have been splendid against the trusty white over yellow Redskins threads.

5) Jets-Texans: NYJ in white/green, HOU in navy/white. Traditionalists will squawk, but the Jets in green pants salvages a ton of good. It's just the spark needed to offset the Texans in a smart, but rather non-offensive navy over white.

4) 49ers-Seahawks: SF in white/gold, SEA in navy/navy. For this moment in time, I actually like this matchup. Gold and navy dominate, but somehow in my peepers, this make the Niners' red trim pop, in a good way.

3) Rams-Ravens: STL in white/white, BAL in purple/black. With the Ravens busting out a rather spiffy set (purple over black), the Rams play it safe with the all white look. And it does the job. Spotlighting a dark non-monochrome uni while featuring an opponent with a good all white combo. 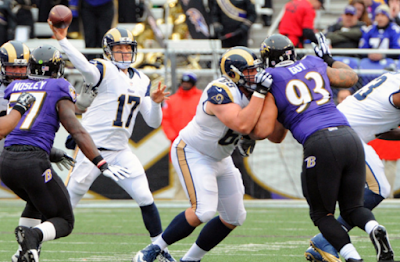 2) Packers-Vikings: GB in white/yellow, MIN in purple/white. Another great NFC North matchup. Not enough yellow on the Vikes? The Packers yellows will make up for that! Too much green, the Pack will tone it down! The right dollop of purple? The Vikes will oblige! 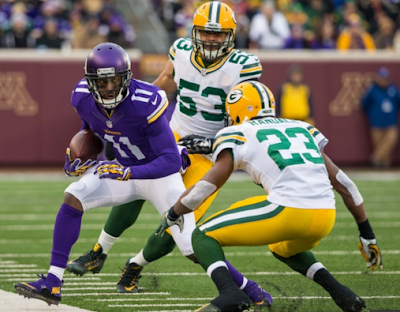 1) Chiefs-Chargers: KC in white/white, SD in alternate powder blue/white. Had the Chiefs gone with red pants, I would have loved it. Had the Chiefs gone with white pants AND whit socks, I would have heated it. But for the second week running, the Chiefs trot out the old white over white with red socks, and I like it. Paired up with the Chargers in the yummy powder blue tops, it hearkens back to some good old AFL days. Nice work, guys! 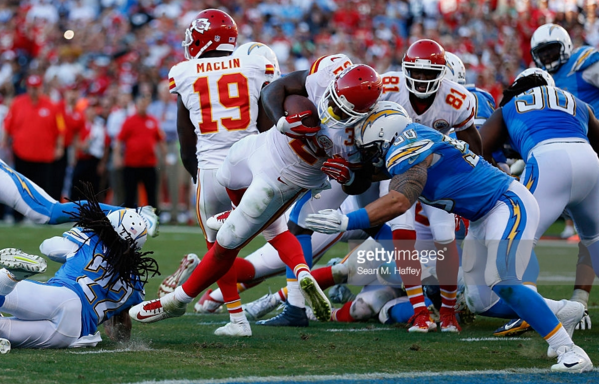 The Gridiron Uniform Database would like to extend heartfelt Thanksgiving wishes to all of our friends and their families! Safe travels!
5 comments