Five Years of the GUD

It’s been a while since I’ve written for the blog, and the Gridiron Uniform Database’s fifth anniversary seemed like a good occasion to come back.

I still remember the GUD’s debut on Sunday June 11, 2011 when it was featured on the front page of Uniwatch.

Having been a fan of football history and uniforms since my teens, this was exactly the kind of site I’d hoped would surface one day. I happily clicked away, browsed and explored for hours that Sunday morning, savoring every visual treat.

Of course, much has changed since then.

Originally the site only went back as far as 1933. The years 1920 – 1932 were added incrementally over the summer of 2012, and many of the templates were empty, as photos for that era, especially for the small town teams, are scarce.

According to the sidebar on Bill’s Update page there have been 1,260 updates to the database’s content since a running count was initiated in January 2012. While many were new discoveries, the vast majority represent a collection of adjustments, refinements, tweaks and in some cases, major overhauls that resulted from the relentless and continuous research to provide the most comprehensive and accurate visual library possible.

While there may be times the GUD appears dormant, nothing can be further from the truth.

Most visitors to the GUD are familiar with the names Tim Brulia (historian & researcher), Rob Holecko (webmaster) and Bill Schaefer (graphic artist & researcher), the official owners of the GUD. There also is a network of GUD frequenters who volunteer their time and assist in large-scale projects and/or forward the occasional historical nugget that might lead to a correction.

You can visit the GUD Forum where some of this takes place. The Forum goes all the way back to the GUD’s second day, June 12, 2011. It serves as a quasi-time capsule to many of the early activities, and you can see some of the source material for what is now represented in the database.

My first contribution to the GUD was offering a color photo of the Giants Charlie Conerly in 1948, which led to a correction of New York’s leather helmets for that season. 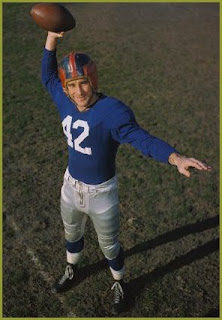 That turned out to be the first of many for me. I often spend my free hours perusing the internet for pro football history, whether it’s statistics, player biographies or old photos. Whenever I came across something I thought was interesting I’d forward it to Bill and Tim for their consideration. Over time, they tutored me on developing a sharper eye for researching, a major part of which was identifying mis-dated photos (you’d be surprised how many exist in the Getty and AP catalogs), as well as discerning the subtleties of interpreting colors from black-and-white photos. 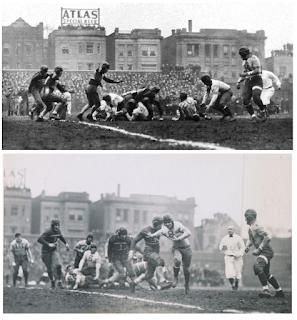 Why does blue sometimes appear darker than red, and other times red appear darker than blue? The best answer I can offer is: it depends on who took the picture, what type of equipment was used, if filters were involved, the type of film and how it was developed.

In March of 2013 I was invited (and possibly may have even been the stimulus for) my first large scale GUD project, which we termed “The Great Belt Overhaul.” What simply began as a casual surfing of old Earl Campbell photos during my lunch hour at work dovetailed into the correction of at least a dozen teams belt colors, most of which spanned the 1960’s through the 1980’s. 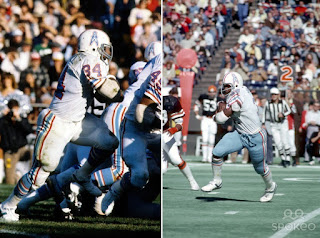 At the time the GUD commonly showed teams with black belts as a sort of default. While discovering that the Houston Oilers belts were white with white pants and blue with blue pants, we noticed that the Pittsburgh Steelers varied yellow and black belts for a similar period. While researching the Steelers we found similar evidence for the New Orleans Saints, and while researching the Saints we found that...well, you get the gist of it. One of our inside saying that we still use came from this endeavor...”While looking for one thing, I found something else...”

It was also at this time that most of my efforts were transferred to email, rather than the forum. I do occasionally add to a thread in the General Comments section of the forum, just for the fun of it. It’s been going for about three-and-a-half years now.

Since that time, some of the other large scale projects undertaken have been the addition of the USFL database in November 2013, the addition of officials’ uniforms in the May of 2014, 2015’s deep-dive project into newspaper archives that resulted in the GUD having a nearly complete photographic record of preseason games dating back to 1950, and the debut of AFL II earlier this year.

You’ll also notice that the ongoing endeavor to represent every regular and post season game on a weekly basis currently goes back to 1937, save for a small handful of games from the 1940’s where we haven’t discovered a photo yet.

My conservative estimation is that the GUD currently displays 14,320 weekly matchups in full color – where else are you going to find information like that? And you the reader can be confident that what is displayed is accurate, as no stone had been left unturned while researching libraries and newspaper archives. If a photo cannot be found to back it up, then the templates are left blank. Guesstimations are not good enough.

To that end, while most of us conduct our research online through newspaper archives and libraries, Tim has taken several sojourns to the Library of Congress in Washington DC and the Pro Football Hall of Fame in Canton, Ohio.

While I most enjoy researching the first three decades of pro football – essentially the leather helmet era – I have one modern era project that I remember fondly. One weekend morning in April 2014, while casually looking over photos of the Dan Fouts-era Chargers, I noticed some irregularities in the orientation of San Diego’s lightning bolts on their pants. 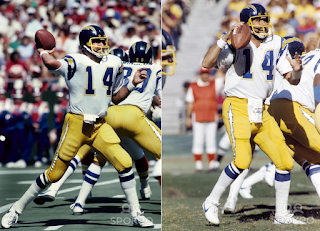 I broadened my search to include the 1960’s and found that not only were they facing multiple directions – they could be forward or backward and upward or downward – but over the years the bolts themselves changes shape and size.

I began saving photos in files broken down by era, and while the bolt placements was often erratic, I was able to nail down the style of the bolts definitively. Did you know from 1961-65 the bolts on San Diego’s pants contained eight points on each side, while all other years through 1987 they had seven?

Or that the only year with uniform bolt orientation was 1984?

I’m not sure if Bill recalls this project as fondly as I do. Initially frustrated at the challenging work, he diligently forged a system - over the course of a full year - to accurately present what you see in the San Diego database today. His ultimate balance of persistence and patience paid off in a big way.

Bill himself handled the 1992-present day Chargers bolts research, and along the way picked up on number font variations.

I guarantee you won’t get this attention to detail anywhere else.

So, what’s next? I don’t want to give away too much, but sometime in the near future, the weekly matchups are likely to extend back a few seasons further, and the other AFL’s will ultimately take their rightful place to complete the presentation of every major professional football league over the past 96 years.

There also has been a recent boon in discoveries of missing teams from the 1920’s. Many of the templates that appear blank today will be replaced by full color representations of what these pioneers of the game we all love today wore on the gridiron in near anonymity over 85 years ago.

Ongoing corrections and enhancements are always taking place. Recently, many teams have had their catalogues refined with what we call the two-tone effect on their pants (the result of two differing materials, usually with the front being a shiny, satin-like quality).

There also has been a recent emphasis on fine-tuning jersey number fonts and sizes as well as leather helmet styles. Some of these differences can be seen in places like the weekly matchups as gifs when multiple styles were worn concurrently.

The research section also is updated regularly. Among the information readily available is a log of every instance of and NFL team wearing white at home since 1957 and what is believed to be the most comprehensive representation of helmet decals anywhere.

Rest assured, all of these will be updated continually as the 2016 NFL season proceeds.

Earlier this year, Rob gave the GUD itself a face lift. The front page has been reorganized to better display the content that is available. Several of the pages inside are now sortable, making navigation easier.

He also added some new features that highlight historical facts and firsts.

All that great information aside, what I appreciate most about the GUD is that it is a community. Right from the very beginning Tim, Rob and Bill welcomed all visitors not only to enjoy the content that was presented, but take part in the collaborative journey that is the GUD. They allowed an obsessive fan like myself to feel like a part of the group.

I'm looking forward to the next five years and all the discoveries that await us!