For those not familiar with the the principle of Occam's Razor, let me explain it in the simplest terms possible. No pun intended.

Occam's Razor basically states that when you are trying to solve a problem or explain an occurrence, generally speaking, the simplest explanation is most likely the correct one.

Today we make the case for just such an issue.

For the 10 years that GUD has been operational (Really? 10 years?), we have labored under the assumption that the Portsmouth Spartans (later the Detroit Lions) had team colors of purple and yellow. All available resources stated it as being so. That is until a contributor brought this to our attention...

In the book Home & Away: The Rise and Fall of Professional Football on the Banks of the Ohio by Carl M. Becker, it was noted when discussing the Spartans of 1930 that "The Spartan management ordered new uniforms, purple jerseys with black stripes on the front and white numerals on the back, black pants made of an airplane cloth with a purple knit insert on the back. Socks and headgear would remain the same."

Historically relevant, the same resource outlines that, as a non-League team in 1929, the Spartans had worn blue and white uniforms in 1929 before switching to purple for the 1930 season.

Based on this revelation, we redesigned our representation for the Spartans with the help of this photo, the only game photo for the 1930 Spartans that we have located at this point.


If you have your eagle eyes with you, you should be able to spot the Spartan just left of center facing you with the black "V" high on his chest. Other Spartans of note in this photo are the two at left including #21 and another just below the 'V Spartan' fully displaying the black pants and purple inserts (butt-stripes) down the backs of his legs. This was enough to construct the new 1930 Spartan image for GUD. A more pastel-shade of purple was needed to adequately represent the amount of contrast next to the 'black' seen in this photo. 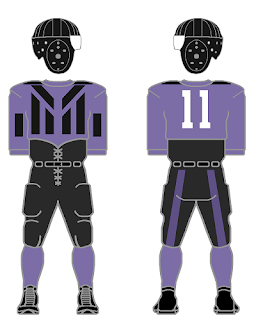 We were happy to add this image and everything was just 'peachy.' But didn't I mention that Portsmouth was purple and yellow? Well, for years now, we have been referring to this 1932 Spartan team photo. At that time, most team photos were taken during the preseason wearing the previous year's uniforms. Remember the 1934 team photo of the Pittsburgh Pirates (Steelers) wearing their 'bumble-bee/prison stripe' jerseys? Even the Steelers, themselves, assumed those were the de facto 1934 uniforms for that very reason despite the verified truth that they only appeared in a single 1933 game and not one game of the 1934 season.

But 'YIKES!" how about those stripes? For the 1931-33 seasons, we had not come across a single photo of these striped jerseys being worn in a game. And seeing these striped jerseys next to the darker (obviously purple) jerseys, the assumption was made that these must be yellow jerseys. Were they practice jerseys? Possibly. Were they college jerseys retained by players from their alma mater? Not likely. So we continued our assumption that these yellow jerseys were simply for practice purposes. Ample contrast with purple would have helped for split-squad practices. 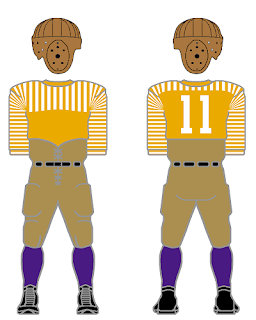 But then something happened. I noticed something in this photo.

Note the two yellow circles. The Giants never wore anything resembling these stripes so these players must be Spartans. In fact, you could make the argument that even the right arm of Spartan #10 (back to the camera) seems to indicate stripes, as well. Yet all other photos from this game show no stripes. Spartan players can be identified by having no numbers on their chest (the Giants did) and large numbers on their backs, much larger than those of the Giants. 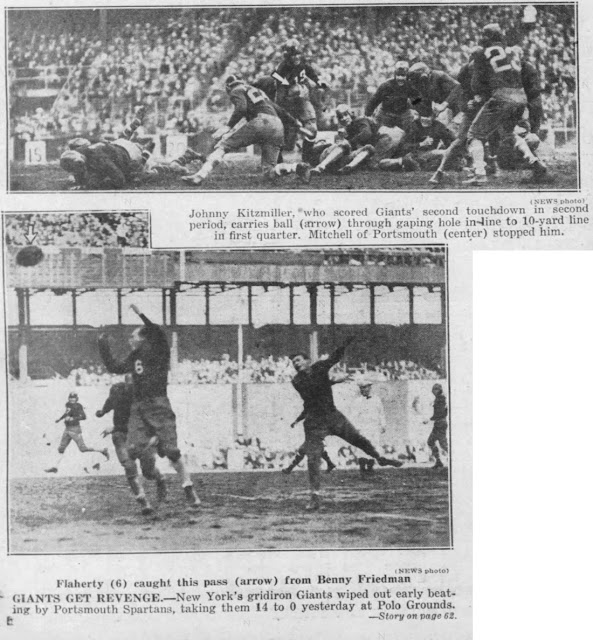 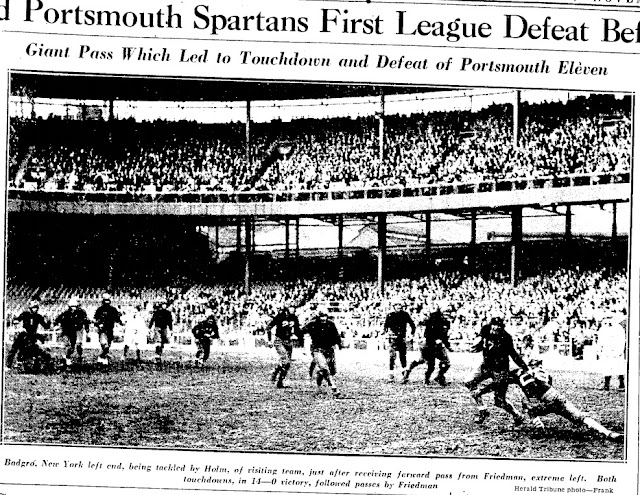 But then I actually started to read the articles for this game. As you can see, some of the game was played in bright sunlight. However, near halftime, the skies opened and torrential rains hit the Polo Grounds for much of the second half. Jerseys would get wet. Jerseys would get caked with Polo Ground mud. Why not supply players that needed them most with a dry, second jersey to wear for the rest of the game? This would explain why some players may have the striped jerseys in that first photo and the rest do not.

One question still remained. Would it be acceptable for the Spartans to wear a mix of purple jerseys and yellow jerseys? We have evidence that the Brooklyn Dodgers of 1933 wore 3 different styles of red and white jerseys in a single game but those were at least the same color and still two years into the future.

No. Something else was going on here. Additionally, we know that the Spartans brought the striped jerseys from Ohio to New York. How, you ask? Spartan promotional photos were taken the day before the game inside the Polo Grounds. 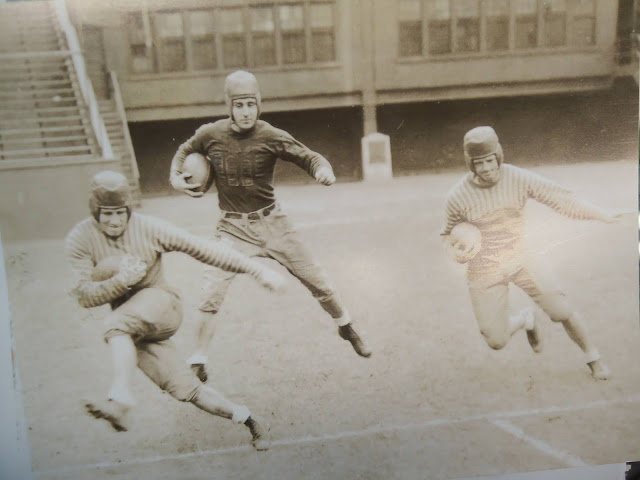 So what's going on? The explanation is completely 'Occam's Razor.' The striped jerseys aren't yellow.

Remember those 1930 Spartan uniforms? Well, our own Larry Schmitt recently uncovered this photo of Spartan Glenn Presnell in 1930. It cinched for us that we had nailed the 1930 design (except for the fact that Presnell opted not to wear the black pants). 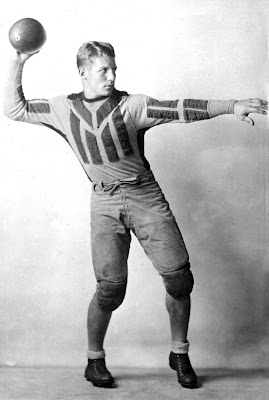 Soon after, there was an 'ah-ha' moment. Looking back at the team photo that included 7 players in striped jerseys, I noticed that another 9 players were wearing presumably a darker, more violet shade of purple on their newer 1931 jerseys. A violet purple shows darker on 1930s black-and-white photography in the same way that red and blue were dark and nearly indistinguishable from each other.  Even more attention-getting was the seventh player in the bottom row - Ray Davis. He appeared to be wearing the same 1930 jersey as shown in the Presnell photo and the photo from the 1930 Portsmouth/Green Bay game. More importantly, his jersey appears to be the exact same color as Maury Bodenger's striped jersey immediately to his left (camera's right).

We had been wrong to assume that the striped jersey was yellow simply because we were told that team colors were purple and yellow and because it showed in the Polo Grounds practice promo photo as being lighter than the violet purple jersey. These striped jerseys were, in fact, the same lighter shade of purple as the 1930 jerseys.

This would better rationalize Portsmouth's use of the striped jerseys in the 1931 rain/mud game in New York. While they may not have been the same purple, at least they were purple - purple enough to contrast with the red and blue of the Giants without causing confusion.

The simplest explanation is usually the correct one. Occam's Razor.

We will continue seeking further proof, perhaps through a jersey auction one of the striped jerseys will appear and further confirm (or refute) our theory. But, after all, the original idea that the striped jersey was yellow was just a theory, as well. Now we have some better evidence and, hopefully, a better theory to work with until proven otherwise. 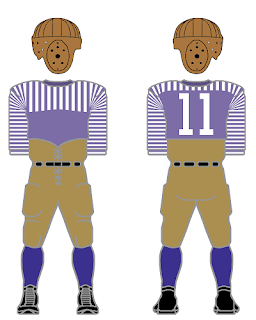