It is my hope that this particular number has sparked your curiosity.

No. It is not a new rushing record.

No. It is not an amount of money paid to Tom Brady each time he sits on the bench between possessions.

It represents something else. Something we, here at the GUD, have been tracking literally since we broke ground on this site 10 years ago. Something that had become a 'white whale' for us. Something that we had almost given up hope on.

When we began adding preseason games to GUD, one historical tidbit caught our attention. Prior to the 1976 season, the St. Louis Cardinals played the San Diego Chargers in Japan on August 16. It was the first professional football game played outside of North America. A few clips showing footage from the game floated around the internet and eagle-eyed GUD visitors noticed that not only were the Cardinals wearing the American Bicentennial patch on one shoulder, but they were wearing some other patch on the the opposite shoulder. 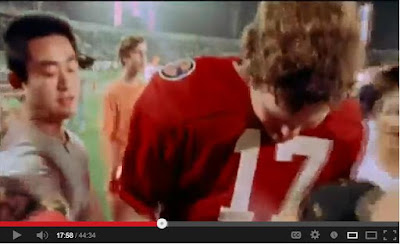 It both infuriated and frustrated us at GUD because we could not get a clear, close look at it. Further confusing matters was the fact that newspaper photos showed the Cardinals wearing the same 2 patches for 2 other games that preseason. One game before Japan and one game weeks after Japan.

What was this patch? Was it an advertisement? The image seemed to somewhat resemble the logo of Japan Air Lines. One clip in the video footage showed the Cardinals disembarking a JAL jet upon arrival in Japan. Perhaps it was some sort of sponsorship for the game and a mid-70s version of the JAL logo.

Was it a memorial? Had someone in the Cardinals organization passed away and the franchise sought to memorialize the person with a jersey patch? It seemed unlikely since the patch only appeared on the Cardinals' red jerseys and not the white ones.

Because the Cardinals were no longer in St. Louis, there really wasn't anyone to go to there to ask for help and the 'Arizona' Cardinals did not respond to our requests for assistance, likely wanting to remain distant from their pre-Arizona heritage.

Online searches in 2015 had led us to an image of a jersey possessed by the Pro Football Hall of Fame donated by Cardinal Terry Metcalf alleging to be from that specific game in Japan. However, the photo of the jersey the HOF published online showed only the back of the jersey and not a single glimpse of the patches. 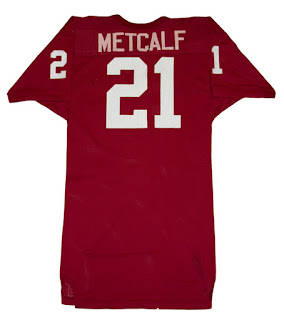 Over the years I twice attempted to contact the Hall of Fame Research Center by mail (as they, themselves, recommend on the HOF website) asking for a look at the front of the jersey to see the patches. I never heard back from either of my attempts in 2015 and 2017. I began to think that the Hall was simply saying the jersey was from the game but didn't want to show the front due to not actually having the patches present which would prove it was not from the game in question at all.

One week ago, I found myself watching a somewhat longer collection of video clips from the game and the ceremonies involved. After the game ended, fans, reporters, and cameramen took to the field  as the players attempted to leave. A few Cardinals were cornered by these reporters and cameramen as in the Jim Hart photo posted above. But the new video clip offered something I had not seen before.

Defensive lineman Charlie Davis leaned close to the camera with his right shoulder. The same shoulder burdened with the patch in question. I managed to pause the video at the specific point in which the patch was the closest and most visible. I then enlarged it and rotated it. 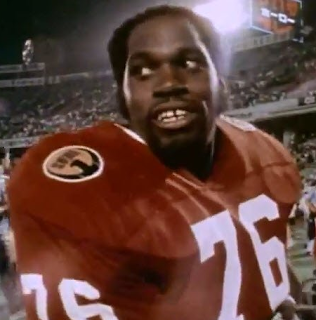 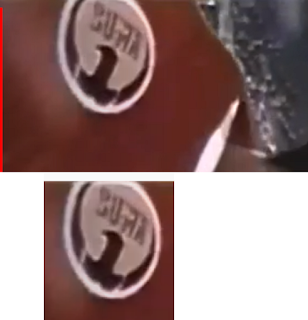 From what I could make out, the letters "B U M A" were visible. This was the first lead we'd had in this search for years. But what the heck was BUMA?!?

I sent the photo to everyone else here at GUD hoping for some additional input and opinions. Within an hour of sending out the photo, I received word from our Tim Brulia.

He had solved the riddle.

The letters were not BUMA but rather SUWA. Not wanting to wait for the other shoe to fall, I continued to read from Tim's brilliance. Prior to the game in Japan, the city of St. Louis had established relations with the city of Suwa, Japan, as 'sister-cities.' The patch was meant as a tribute from one city to the other. Tim also provided an image of the Suwa city flag and it perfectly matched the logo seen on the patch. 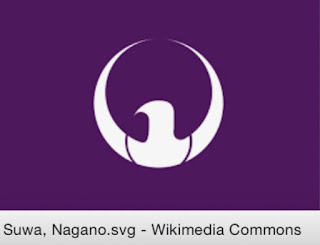 We now had everything we needed so I set myself to creating a graphic version of the patch to use on GUD as all of the photos were still far too grainy.

I added the revised graphic to the Cardinals' 1976 team image and jersey and uploaded it onto the site. However, I waited to add this find to our site's Update Blog. As our viewers know, we typically post separate blog entries in our Update section describing changes to images that we make and showing the evidence detailing the reason for the change(s). Instead of doing so in the Update blog, I decided to display the update here due to the amount of information and the scale of its importance. I also wanted to wait because of the possibility that something else was brewing. Something big.

In the early days of GUD, a fan from Dublin, Ireland, named Alan Kennedy, frequently contacted us with information regarding a personal hobby of his. Alan collects NFL patches. Anniversary patches. Memorial patches. Captaincy patches. If it's been worn on an NFL jersey, Alan either has one already, he's in the process of getting one mailed to him, or he's bargaining with someone to get one. Alan has been a great asset in helping us differentiate between an authentic patch worn in League play and a reproduction, generally those produced by Willabee & Ward.

By pure coincidence, when I included Alan in the distribution of the raw 'BUMA' image, he informed me he had just days earlier launched his own request with the Hall of Fame Research Center for an image or two of the front of the Metcalf jersey. I shared with Alan my past failures at soliciting aid from the Hall over the years, but Alan maintained a positive attitude and continued to hope for positive results.

The man Alan had made contact with at the Hall of Fame, Mr. Jason Aikens, had come through -- BIG TIME. He sent Alan several photos including those you see here. 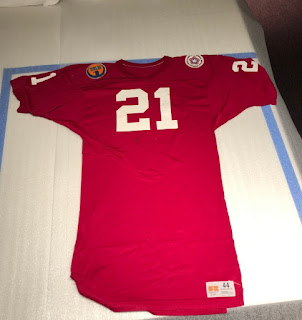 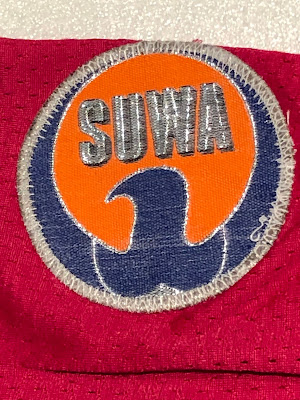 Finally, our long wait was over and we could now fill in this gap of NFL uniform history that had so nagged us - taunted us - for years. I was amazed at how the true colors were so different from what we had expected based on the grainy, video stills. Orange instead of yellow. Blue instead of black. The truly astonishing part was that the patch appeared to be made of denim. Just. Simply. Awesome.
The patch now takes its permanent place on our site never to be puzzled over again.
Furthermore, having reached out and making contact with Mr. Aikens, myself, I thanked him profusely not only for the photos but also for allowing us to use the image of the patch on our site. As it turns out, Mr. Aikens had informed Alan that not only was he aware of the GUD, but had, in fact, used our site as a reference on several occasions. Mr. Aikens informed me that he would be happy to look into some of our most notable instances where we had not, as yet, been able to produce photos from games in the 1940s and 50s thereby enabling us to remove a few more 'gaps' currently present on GUD.
Things continue to look bright for the future of the Gridiron Uniform Database. Stay tuned!
Bill Schaefer
*
*
*
*
*
*
*
*
*
*

6,699 miles from Dublin, Ireland, to my email inbox here in Bradenton, FL.

In all, 23,158 miles. Nearly one complete circle of our planet, Earth.

Rest Easy, SUWA, you deserve it.