Just about that time!

It's been awhile since we did a blog. But as we gear up for a new season, the NFL's 100th, we thought we'd alert you to a virtually completed project that has been about five years in the making.

Preseason uniforms and their matchups.

The GUD uses 1940 as a starting point for the preseasons as prior to 1940, exhibition games were a rather scattershot set up that occasionally took place during the season or even the postseason. Still, even in the early years of this endeavor, there are plenty of games against non-league teams, minor league teams, glorified sandlot squads and even Canadian Football League teams, among others.

As the years go by, the preseason schedule gets a little more structured, eventually settling on a rather lengthy six game schedule and finally, in 1978, settling on a four game slate that we are very familiar with today.

Over the years, the preseason games have had some really quirky uniform designs. In particular, when a team was headed for a new look for the coming season, their preseason attire would feature a mish-mash of old designs from the previous season and the upcoming season. In some cases, a team would trot out a new design (notably the 1969 black helmeted Saints and the 1984 orange numbered brown jerseys of the Browns) that would be scrapped for whatever reason before the start of the season.

Our normal yearly team pages highlight uniform combinations that were worn only in the preseason. To view specific preseason matchups, please click on the desired season from the decades buttons on our homepage (please note that 1920s and 1930s are not available)

From here you will see a weekly listing of games on the page.

Click on the game you wish to see in detail

and there it will be! 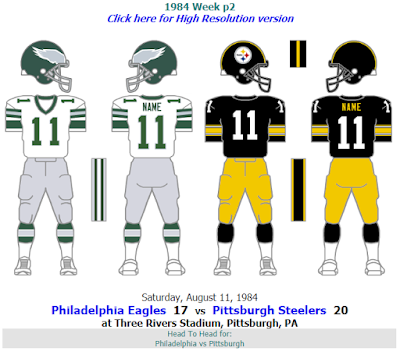 As always, if you see any errors, please contact us with documentation to verify your finding and we will certainly make the proper adjustment.

Special thanks to Bill Schaefer and Larry Schmitt for their extremely hard work in this project.