16) Eagles-Jets: PHI in green/white, NYJ in white/white. While it's nice to see the Eagles in green for the first time this season, it is truly horrible to see the Jets in a literal white from head to toe capacity. The Jets decided to go with white cleats and it just doesn't work for me. Ew. 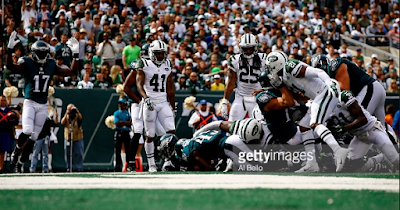 15) Titans-Colts: TEN in white/navy, IND in blue/white. Thee's not much more that could be done here. Various shades of blue with only a touch of red to break up a bit of a color monopoly/monotony.

14) Bears-Seahawks: CHI in white/navy, SEA in navy/navy. Way too much navy gravy here. I would have loved the Seahawks in gray pants in this one. Orange, lime green and a dash of gray help, but only a little.

13) Jaguars-Patiots: JAX in white/black, NE in navy/silver. This one just does not get my love. I think the Jags in all white would have boosted my metabolism, but it holds its own. Not much else to say.

12) Raiders-Browns: OAK in white/silver, CLE in brown/brown. Traditionalists continue to cringe over the Browns remake this season. I am not, but until the Browns do something about the hard-to-see orange numbers on the brown jersey, their (brown jersey) matchups will score low. Playing the Raiders in their dull white over silver doesn't help matters here.

11) Bills-Dolphins: BUF in blue/white, MIA in white/white. Hearken back to the 1992 AFC Championship Game. Bills in red helmets, Dolphins in aqua pants. A wonderful display of color. Both now replaced by white. Sigh. Next, please.

10) Bengals-Ravens: CIN in white/black, BAL in purple/white. Socks can be crucial. And here, it is. This is a nice enough matchup, but IF the Bengals had been wise and break out their orange socks instead of the black hose, a major vault of the rankings would this one go. Nah. And too bad. This is colorful enough, but not as good as it could have been.

9) Broncos-Lions: DEN in white/white, DET in honolulu blue/silver. While the Lions unis are great as a standalone, the Broncos in all white is helped some by the Lions' grace. Y'know, I'd like to see the Broncs pull off white over navy. True, the side panels would be a mis-match (navy then orange), but it would perk things up a bit for a lacklusterish uni.

8) Buccaneers-Texans: TB in white/pewter, HOU in navy/white. Bucs, one thing. You have red socks in your arsenal. Use them!! The pewter dominated accessories take away from a potentially very colorful uni. Texans in the respectful navy over white combo with a little red saves this one a tad.

7) Saints-Panthers: NO in black/gold, CAR in white/white. The Saints deserve a hug for keeping the all black look shelved. Gives a bit of a sparkle with the gold pants against a somewhat black dominated trim of the Panthers with the sweet carolina blues.

6) 49ers-Cardinals: SF in white/gold, ARI in red/white. The unis may have changed through the years, but the basics of this one goes back over 50 years. An abundance of red, kept from overflowing by the Cards white pants. The 49er gold are a good accent to this encounter.

4) Redskins-Giants: WSH in white/yellow, NYG in blue/white. We were told at the beginning of the season that the NFL was "encouraging" teams to go color vs. color for Thursday Night Football. This would have been an ideal matchup for such an occasion. Alas, the Redskins decided to forego what could have been a glorious burgundy vs. blue game. Still, this wasn't all that bad. The Giants decided to rock their white pants for the first time this season. I like the white pants with the blue jerseys. Gives off a clean, sharp vibe and goes well against the white and yellow and burgundy lid.

3) Steelers-Rams: PIT in white/yellow, STL in navy/white. The Rams make the right move to go with white pants against the traditional white over yellow Steelers garb. It makes the entire upper body of the Rams shine bright. A well above average matchup. 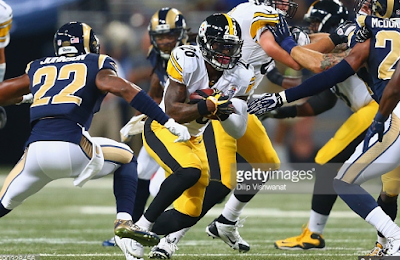 2) Falcons-Cowboys: ATL in red/white, DAL in white/mint. I can't describe my enjoyment of the Falcons in a black helmet, red jersey and white pants and red socks. I just dig it. And it seems to blend very well with the Cowboys fifty shades of blue outfit. 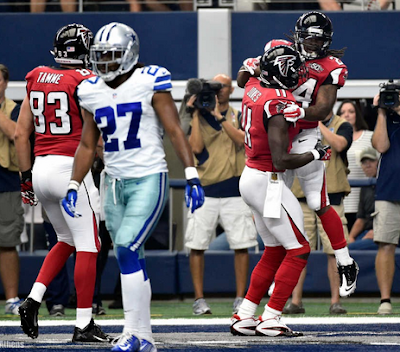 1) Chiefs-Packers: KC in white/red, GB in green/yellow. This just looks glorious. Two of the better unis getting together for a Monday night. Perhaps a bit of yellow dominance, but with red and green to dominate, what's not to like here? Boffo! 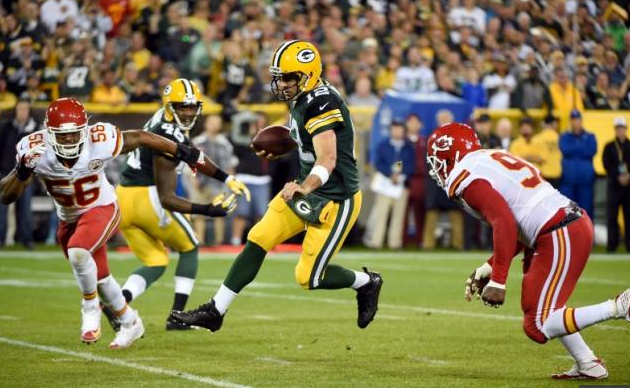 That's all for this week. Back atcha for Week 4 next time. Bye!
1 comments