Here's your latest installment, with the first tie ever in the rankings.

14 (tie)) Saints-Ravens: BAL in white/black, NO in black/black. Love me some black, hate me too much black. Welp, just a case of black overkill here. Ravens did right with black pants. That's the better look for them here. Saints, though, not the right choice with their black trousers. Gold would have been much the better choice here. 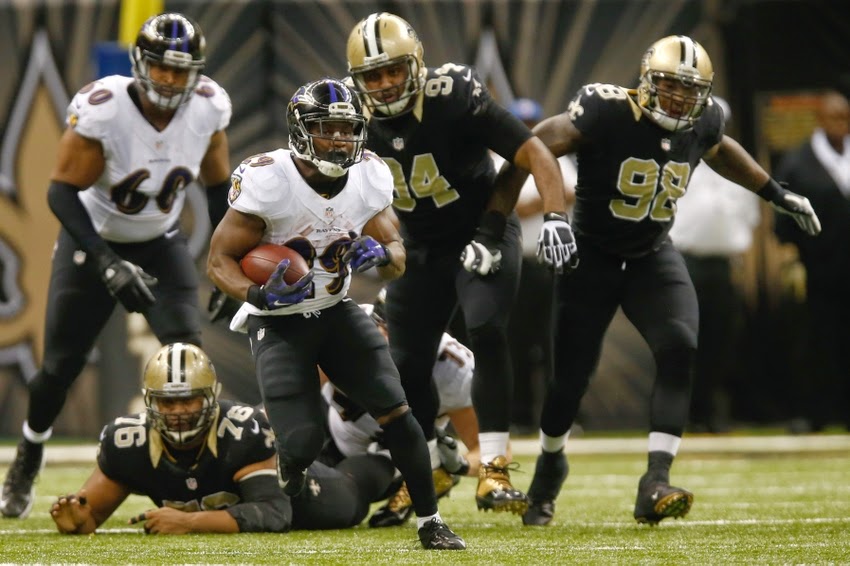 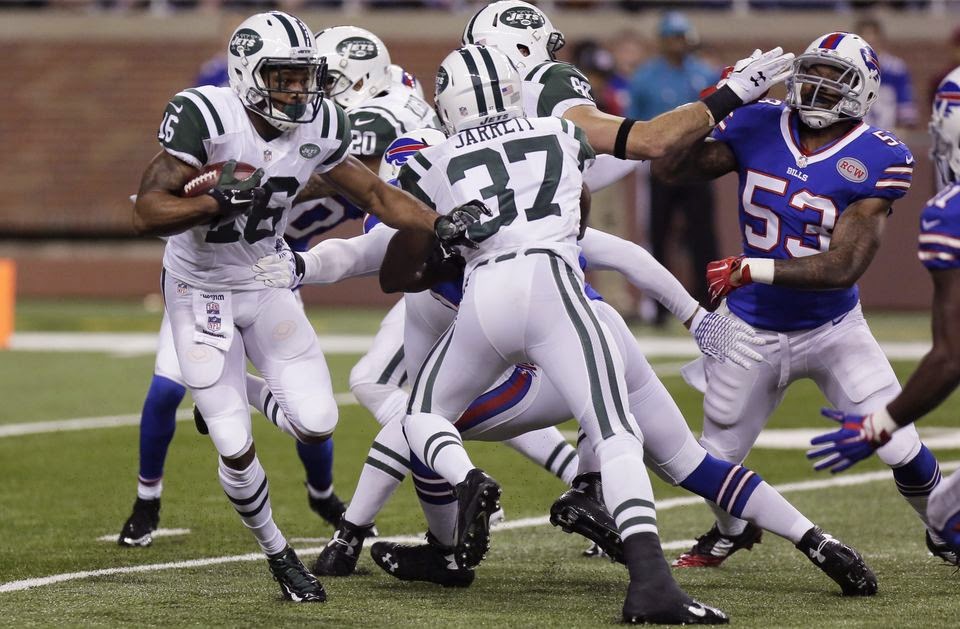 13) Lions-Patriots: DET in white/silver, NE in navy/silver. Just a bit more silver than I can handle here. And a healthy chunk of blue, too. A time when a rare matchup is best let that way, rare.

12) Cowboys-Giants: DAL in white/mint, NYG in blue/gray. The greatest catch in NFL history? If we're taking game action, Odell Beckham Jr's snag just may be it. But this blog is about uniform matchups and sorry, this is not the greatest anything in that regard. Lots of blue, blue-gray and gray, with only a taste of red to keep things from total mediocrity.

11) Jaguars-Colts: JAX in white/white, IND in blue/white. Becoming common while being quite uncommon. These AFC South foes with unis that - using a music analogy - is like Iggy Azalea meets Patti Page. Yep, a classic look from long ago meeting a decidedly 2014 style uni. True blue up against gold, black, and a whiff of teal.

10) Buccaneers-Bears: TB in white/white, CHI in throwback navy/white. I'm scratching my head on the Bears deciding to wear the "Monsters of the Midway" TB (throwback) classic against TB (Tampa Bay) Modern. Sorta reminds me of the aforementioned Jags-Colts tilt, except even more extreme! Still, a good stew of colors, with red, orange, pewter and navy.

9) Bengals-Texans: CIN in white/black, HOU in navy/white. This is OK. Could be A-OK if the Bengals had simply worn orange socks to go with the black pants. Texans in navy over white does compliment well, but another matchup with potential, slips up a bit. 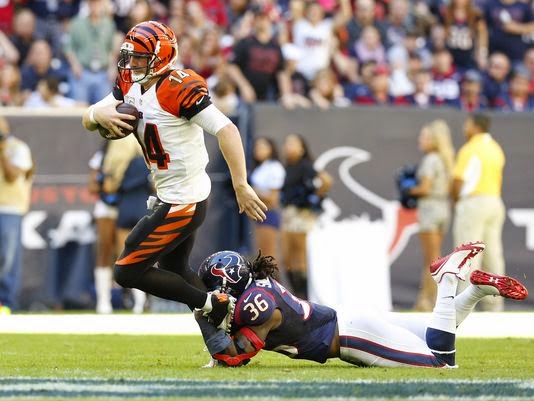 8) Dolphins-Broncos: MIA in white/white, DEN in orange/white. Last week, I was positively giddy bo biddy over the Fins awash in aqua. This week, a cold whack of reality sets in as the Fins return to the land of all white. However, for them, this matchup is saved by the raw sweetness of Bronco orange. Actually, the aqua trim does bounce well off the Bronco orange with a dollop of navy,

7) Titans-Eagles: TEN in white/navy, PHI in green/white. While this is really not a bad matchup, I just can't get a proper dose of wow for this one. Good colors (navy, green, silver, a touch of columbia blue), but maybe lackluster execution? Certainly not the worst pairing for the week, but far from the bes

6) Rams-Chargers: STL in white/navy, SD in navy/white. This is nice. Navy/white/navy versus white/navy/white. Normally such oppositry (yeah, I made that word up) is a delight. One problem, all navy and all white and to an extent, all gold. A bit more color flow would have pushed this one even higher. Nonetheless, I like that visual flow.

5) Cardinals-Seahawks: ARZ in white/white, SEA in navy/navy. Excluding socks, a triple dose of white meets a triple dose of navy. Truly, had the Cardinals rocked their red bottoms, this likely sends this matchup to the top. Still, this is a visual treat. Maybe the red yoke on the Cardinals is just enough to make this one yet a successful pairing. Seahawks sleek in the all navy,

4) Chiefs-Raiders: KC in white/red, OAK in black/silver. A matchup that has changed little since 1968, when the Chiefs started to wear red pants with their white jerseys. Not much more can be said. The red and yellow paired against silver and black. Looked good then, looks good today.

3) Packers-Vikings: GB in white/yellow, MIN in purple/white. Again, a common get together that seldom bores. One time when yellow, in the forefront for one, is kept quiet for the other. Add the green and purple and this one screams, "NFC North, heck yeah!" 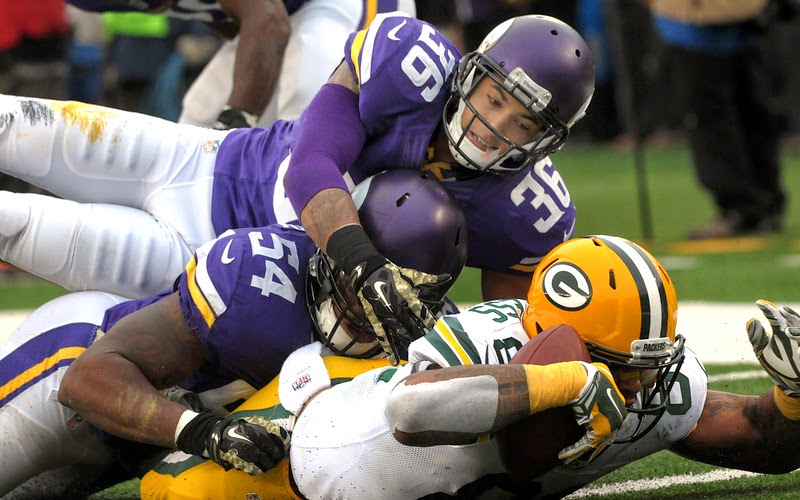 2) Redskins-49ers: WSH in white/yellow, SF in red/gold. Aw yea. Maybe a slight tilt of shades of red and um "gold", but this pairing is a delight. Red in scarlet and burgundy mixed with gold in shades of yellow and um, y'know, gold, and the way they're carried out by these two make for a goody. 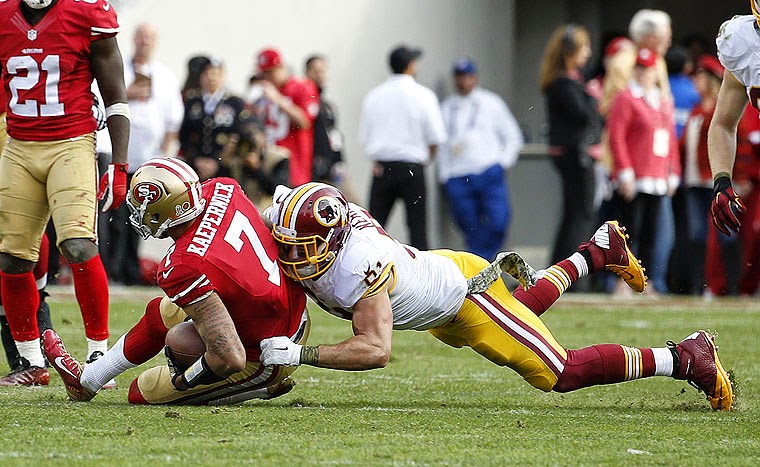 1) Browns-Falcons: CLE in white/brown, ATL in red/white. Perhaps its the rarity when these two meet up, but I think this one is dandy. Two sides in triple color; red, black, white, brown and orange are at the fore and no overuse of any of those hues. Upper level of the food chain! 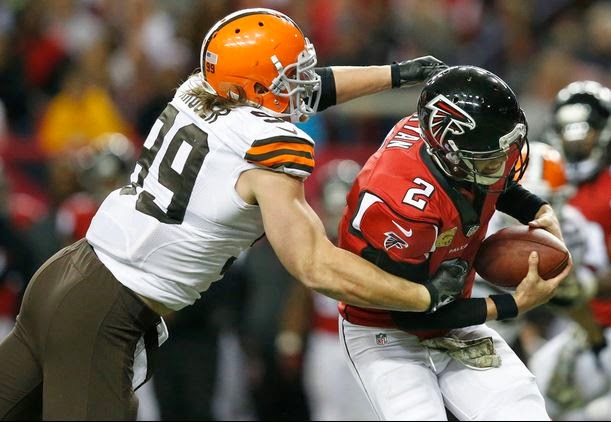 That is it for this week.

On behalf of my partners Rob and Bill, we would like to wish all of you a very Happy Thanksgiving with loads of football and turkey to keep you and yours comfortable!