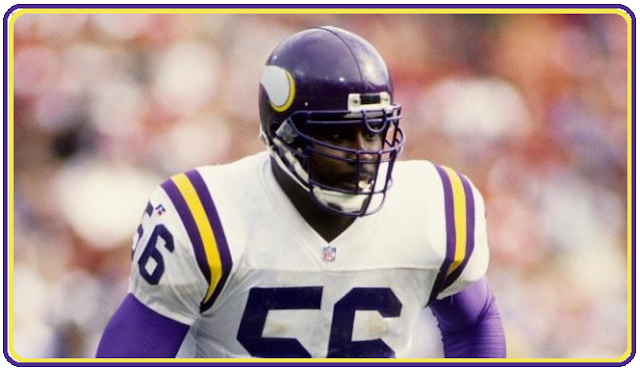 Chris Doleman, Hall Of Famer
by Larry Schmitt
Continuing our weekly series highlighting the 2012 Pro Football Hall of Fame Class, we remain firmly entrenched on the line of scrimmage. This time however, we will move over to the defensive side of the ball.
Chris Doleman was an impact defensive player for three teams over his 15 year career.

He was drafted as an outside linebacker from Pitt, 4th overall in 1985 by the Minnesota Vikings. Toward the end of his second year, he was moved up to defensive end and found his niche as an edge rusher. Using his dynamic play-making ability, he became a premier defensive play-maker on the level of contemporaries like Reggie White and Lawrence Taylor.

In 1987 (a strike shortened, 15 game season in which Doleman played only 12 games) he led Minnesota with 11 sacks and was voted to his first of eight Pro Bowls. 1989 was an even better season. He had 22 sacks, one-half short of the all-time record, and was named First Team All Pro. 1992 brought Doleman the NFC Defensive Player of the Year award when he led the Vikings with 14.5 sacks and an interception return for a touchdown and a safety.

His athletic ability enabled him to make big plays, where he combined speed, body lean, leverage, and balance into a competitive advantage few offensive tackles were able to handle. More than just a sack specialist, Doleman complied 45 forced fumbles during his career and eight interceptions, an unusually high number for a defensive lineman. He also had three return touchdowns and two safeties.

Most remarkable however was his ruggedness. Over the span of Doleman's 15-year career, he played in 232 games, missing only two due to injury.
Not coincidentally, team success also followed Doleman wherever he went. In six of 10 seasons in Minnesota, the Vikings qualified for the playoffs. Following the 1993 season he was traded to the Atlanta Falcons, where he continued to maintain his high level of play, leading the Falcons with nine sacks in 1995. In Doleman's second year with the Falcons he led Atlanta in sacks as the team qualified for the playoffs.  As a free agent, he signed with the San Francisco 49ers and was a key part in their three consecutive playoff berths during his tenure there. Doleman recorded double-digit sack seasons, include a career second best 15 in 1998, before returning to Minnesota for one final year in 1999. Excelling in these big situations, he recorded seven sacks in six playoff games.

Doleman was rewarded for his achievements by being named to the NFL's prestigious All Decade Team for the 1990's. 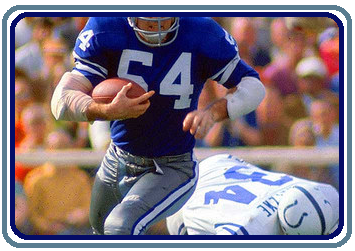 Here are the answers from last week's trivia questions with a little detail behind the answers:

1) What four instances did the "home" team of the Super Bowl NOT wear the home jersey that they normally wore that season? Bonus: Can you tell me why?
Answer: V, Cowboys in blue (because they had to), VIII Dolphins in aqua (because they had to), XX Patriots in red (they wore white at home in 1985 and were hoping that the one loss by the Bears was when wearing white at Miami would work in the Super Bowl. It didn't) and XL Steelers in white (because they wore white on the road for their three playoff wins in 2005 and Coach Bill Cowher wanted to keep the mojo working).
From Super Bowl I through Super Bowl XII, the rules regarding the home team of the Super Bowl was that they got the certain bench and they had to wear dark uniforms. Cowboys GM Tex Schramm was not fond of this rule as the Cowboys had to wear their blue instead of their whites for Super Bowl V. As a man with lots of influence on Commissioner Pete Rozelle, he was able to sway him to change this rule effective with Super Bowl XIII that the home team had its choice of dark or white. Of course, it just so happened that that very Super Bowl (XIII) was when the first team, Schramm's own Cowboys, took advantage of the rule.

2) What was the First Super Bowl where the team wore that year's Super Bowl patch on their jersey?Answer: Super Bowl XXV, where both combatants, the Bills and Giants wore the SB XXV patch on the left collarbone of their jerseys.
This was to celebrate the Silver Season of the Super Bowl. In fact, the Super Bowl XXV logo was placed at midfield, and the official game program featured a silver border in celebration. For awhile, this would be the only SB where patches were worn until Super Bowl XXXII (Broncos-Packers), and they have been worn ever since.

3) What was the first Super Bowl where the team(s) wore the supplier vector?
Answer: Super Bowl XXIII.
Some (but not all) of the Bengals players had their white jerseys with the Champion vector applied on one of the sleeves. The opposing 49ers did not have vectors on their red jerseys.

5) What was the first Super Bowl to feature a team wearing a dark jersey/dark pants combination?Answer: Super Bowl XL.
The Seahawks were the team and so far, the ONLY team to wear a dark/dark - or monochrome - combination. In fact, were it not for the Steelers stunning decision to wear white as the home team for this matchup (see #1), we would still be waiting for a team to go dark/dark in a Super Bowl!

6) What were the four Super Bowls where one team did NOT have names on their jerseys?Answer: The first four Super Bowls; I (Packers), II (Packers), III (Colts) and IV (Vikings).
The old standby NFL stayed with tradition, even in the Super Bowl, not to affix the jerseys with the players' names. Believe it or not, there was nothing in the rules that prevented an NFL team from slapping a nameplate on the jerseys. They just chose not to. Meanwhile, the AFL started the practice right from the get go in 1960, as some of the teams wore them from the beginning, and most joined the practice during the season. By 1961, it was league policy for the AFL teams to wear "NOB's" for all regular season and playoff games, including the AFL Champions in the Super Bowl. Ironically, in the one game you'd think where the NOB's would be needed the most, the AFL's All-Star Game, NOB's were never worn!

7) What were the two Super Bowls where the game officials wore special uniforms?
Answer: Super Bowls I and II.
Because the NFL Officials and AFL Officials wore completely different uniforms, the officials assigned to work the first two Super Bowls in special uniforms just for the occasion. The caps were white with thin black soutache stripes, a black button and a black visor.
The stripes were - like the NFL uniform - black and white, but the sleeves were black with the official's number in white and worn only on the sleeves.
The pants were white with a hairline black stripe on the sides and the socks were like that of the NFL refs, black with the stirrups exposed with two white stripes. In 1968, the season after Super Bowl II, AFL Officials began wearing a duplicate of what the NFL officials wore.

8) What is the only instance of a team wearing a throwback jersey in a Super Bowl?
Answer: The 49ers in Super Bowl XXIX.
The 1994 season was the NFL's 75th season and the league encouraged use of teams to wear throwbacks uniforms for at least a game or two for the season. The 49ers went well beyond the game or two thing and wore their 1955 throwbacks for most of the season, including all of their post-season games. They wore their home red throwback jerseys against the 1994-clad Chargers and throttled the Bolts, 49-26.

9) What was the Super Bowl that featured - for the first time ever - the game officials wearing the NFL Shield prominently on the front of their caps?
Answer: Super Bowl XXXIX.
Game officials uniforms had changed very little for roughly a twenty year span before this game, save for the occasional tweak here and there, and memorial armbands for their fallen comrades. But in the game that featured the Patriots and the Eagles, the game officials showed off their new caps, emblazoned with the NFL Shield on the fronts of their caps. Pro Football (not counting the WFL, USFL, CFL, etc.) had not seen the officials with a logo on the cap fronts since the 1967 AFL season. This was not a one-off deal as ever since this game, the NFL Officials have worn a logo'd cap. In 2006, the NFL overhauled the refs' unis, which is described in detail on the "NFL Game Officials Uniforms" page under the Research tab on the The Gridiron Uniform Database's homepage.


Hopefully, you did well and also enjoyed the little history lesson on America's biggest sporting event. While the NFL is now in the off-season, we at the The Gridiron Uniform Database are not. There is no off-season at the The Gridiron Uniform Database. Please check in often as we will continue to post plenty of blogs and updates to the database!