Well, at least Color Rush is over.

Texans-Titans: HOU in white/navy, TEN in navy/navy. Whoa. Way too much navy here. a helmet, a jersey, both sets of pants, both sets of socks. 6 of 8 elements in navy? The other 2 in white? Not my cup of tea. 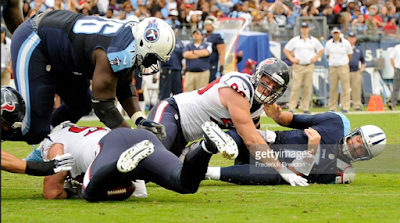 Bengals-Broncos: CIN in white/black, DEN in orange/white. OK, I'll explain, Too much orange. When the Broncos wear the orange jerseys, I am normally in love. When the Bengals wear white over black, I revel in it. But here, orange helmets, orange shoulders (on a white jersey), and orange jerseys all combine forces? I see orange overload. And thus, two otherwise sharp looks combine to fall to the bottom of the wishing well. 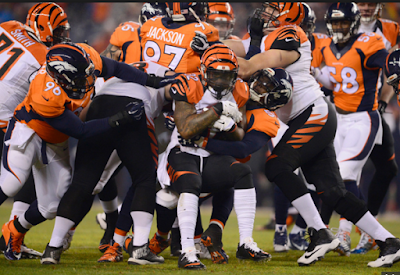 Jaguars-Saints: JAX in white/black, NO in black/gold. Even though the Saints did right by wearing gold pants instead of the all black look, it's not enough to keep it from the lower level. Jags somehow need to make to teal stand out more next season.

Rams-Seahawks: STL in white/white, SEA in navy/navy. I'm not sure where to turn here. The Rams don't wear gold pants anymore. The Seahawks won't wear white or gray pants at home anymore. Yet either or would have spruced this encounter so much. At least the Rams stayed away from navy pants, which would have rendered this matchup as a dullard. 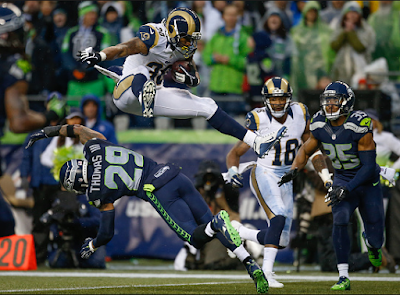 Chargers-Raiders: SD in white/navy, OAK in black/silver. The basics, 2015 edition. Chargers with white over navy blending smoothly with the Raiders familiar black over silver. A bit more powder blue would have spiced this up a tad.

Steelers-Ravens: PIT in white/yellow, BAL in black/white. No issues with the Steelers so much, but the Ravens in black over white...well, it's a nice combo, makes purple as a trim color pop a bit, but the Ravens are best in purple as the main uni color. There's just too much black as a primary color these days in the NFL.

Patriots-Jets: NE in white/navy, NYJ in green/white. The colors are nice, different, but quite familiar. Is this a case of "familiarity breeds contempt?" Perhaps. There certainly are worse matchups, even this week.

Cowboys-Bills: DAL in white/mint, BUF in blue/white. A lot of blue, but it is good blue, especially the Bills blue. While my passion for the Bills blue has died down a bit, it is still sweet nectar and beefs up most any opponent's threads. Such is the case with the Cowboys.

Packers-Cardinals: GB in white/yellow, ARI in red/white. Should this be higher? Perhaps. Am I ticked because the Cardinals shelved the red pants for 2015? Perhaps. But I still like this one. Just not as much as I could or should.

Browns-Chiefs: CLE in white/brown, KC in red/white. I like this one. But I just can't get it any higher on the ladder. Great mix of colors; red, orange, brown, yellow. If played earlier in the season when the autumn colors were awash, this might have been at or near the top.

Bears-Buccaneers: CHI in white/navy, TB in red/pewter. Tradition, meet modern. And this is a glorious matchup of color. Red, navy, pewter, orange. The Bucs regular jerseys are busy, to be sure, but coupled with the Bears stark but unique white over navy, it's a Bingo sort of uni goodness. 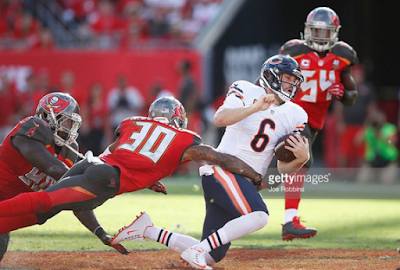 Giants-Vikings: NYG in white/gray, MIN in purple/white. This game marks the end of a two year stint where the Vikings played home games outdoors. I say that because the purple looks so good in the natural elements. This was a gem. Blue, purple, red, yellow, gray. It's a great meld of color against a very cold night.

Redskins-Eagles: WSH in white/yellow, PHI in green/white. What would have been sweet here would have the Eagles in black pants. Would have been a jolt for sure, but would have made the green a little...flashy? Be that as it may, this matchup is above average. 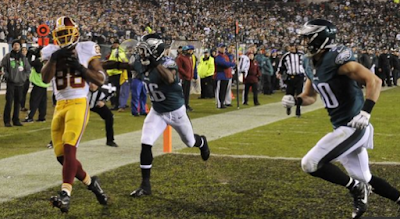 49ers-Lions: SF in white/gold, DET in honolulu blue/silver. This...just works. A lot of metallic splendor, but done right. Helmets and pants on both squads match and the reds and blues here are a worthy mix. 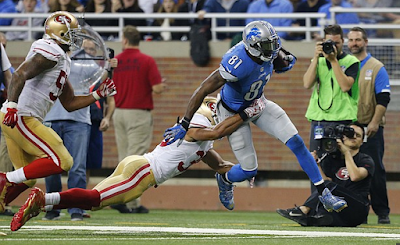 Panthers-Falcons: CAR in white/white, ATL in red/white. A lot of white to be sure, but the Falcons red and black as well as the Panthers silver, light blue and silver make for visual goodness. 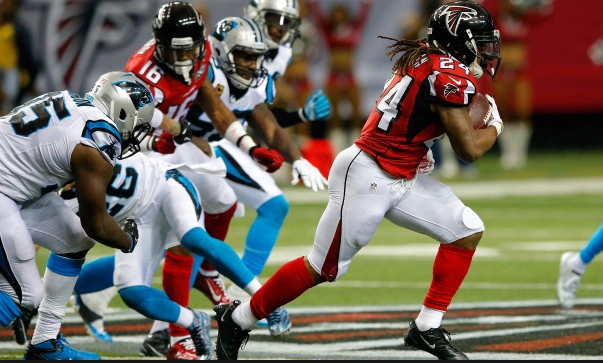 Till next time, take care and wishing all a safe and HAPPY NEW YEAR!! 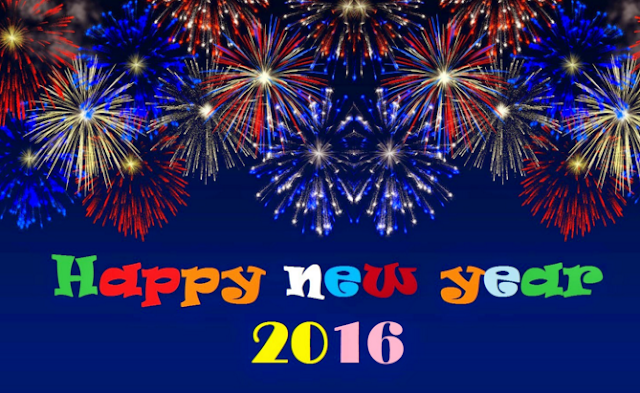