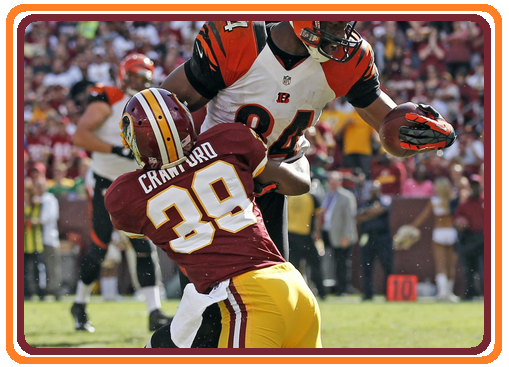 Time to review what was worn for Week 3 by the 32 teams of the National Football League.

#16. Jets-Dolphins: Jets in green/white. Dolphins in white/white. All I'll say about this one is a heckuva lot of white. A very blah look for a very blah game. 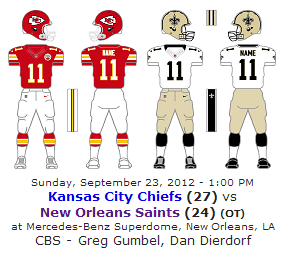 #15. Chiefs-Saints: KC in red/white and NO in white/washed out gold. Probably would have been better if the Saints could have sported black pants, but this is what we get. Not bad, really, but not one of my favorites.

#14. Jaguars-Colts: Jags in white/white. Colts in blue/white. Not much to report here. Jax with the all white look, the Colts in the familiar blue jerseys. I don't know what could have been done to spice this one up.

#13. Falcons-Chargers: Falcons in red/white, Chargers in white/white. OK, this look on the Bolts was good last week, bit this week, not so much. Chargers would have looked much better with the navy pants that would have offset the red and white of the Falcons. But not to be. So, down it goes.

#12. Eagles-Cardinals: Birds of a feather. Eagles in white/green and Cardinals in black/white. Big Red goes the blackbirds route with the black alternate. Not sure I understand why the Cardinals use this alternate, but there it is. And it really doesn't go that badly with the Eagles as opponents, but frankly, the red would have gone a lot better. 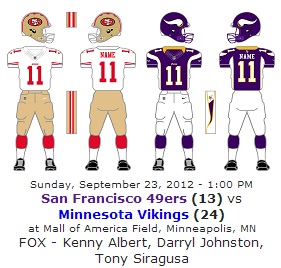 #11. 49ers-Vikings: Niners in white/gold and the Vikings in purple/white. This is a nice matchup. The Vikes in purple just looks right and the Niners keeping it conservative with dashes of the brilliant red. Eye appealing.

#10. Rams-Bears: Rams in white/blue with the Bears in navy/white. I like me some dark pants and the Rams do just that. But if they still had and wore their gold pants, this might be one of the better matchups for the week. Still it's way better than an all-white look. Bears always look good in navy.

#9. Patriots-Ravens: NE in white/navy, BAL in purple/white. Was some talk of the Ravens in all black, but that didn't happen and that's a good thing. With the Ravens in white pants, it blends well with the Pats' color scheme. Well done.

#8. Lions-Titans: Lions in Honolulu Blue/silver and Tennessee in white/Columbia blue. This game gives me the blues (ha ha), Lions in Honolulu and Titans in Columbia and Navy. So if you like a lotta blue, this will fill your need. And I happen to like blue. So this will go up a few pegs on the TimmyB'ometer.

#7. Packers-Seahawks: The game that ended in a furor. Pack in white/green, Hawks in navy/navy. Maybe it would have been nice to see the Seahawks in white pants, but I really like this look and it pairs off well with the Packers in the white and yellow. No controversy from this end! 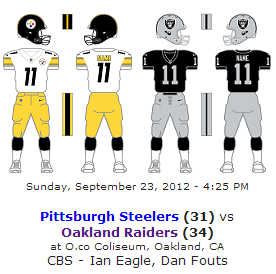 #6. Steelers-Raiders: Steelers in white/yellow and Raiders in black/silver. It might be a lot of black, but it's genuine black. Such an expected matchup, but it stands the test of time. The silver and yellow bounce off the blackness very well.

#5. Texans-Broncos:  Houston in white/navy and Denver in orange/white. This is a nice mtachup, and the main reason is that the Broncos look so right in their orange jerseys. Still grumpy that the Texans wear their navy socks instead of the reds that they put on the shelf several years ago. But this is a goody.

#4. Bills-Browns: Bills in blue/white and the Browns in white/white. The battle of Lake Erie. Or the battle of I-90. Whatever. I just love this Bills uni. And it pairs off nicely with the orange and brown trim on the Browns. 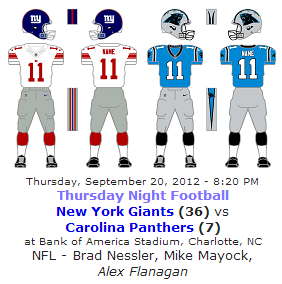 #3. Giants-Panthers: Giants in white/gray and the Panthers in Carolina blue/silver. Always joyful when the Panthers wear the Carolina blue jerseys. I always put their matchups up a few notches when they are in action. No exception here. Just looks so much better than the blacks.

#2. Buccaneers-Cowboys: Bucs in red/pewter and Cowboys in white/mint. Always have like the Bucs' red jerseys and the white pants make the whole combo pop. Alas, the pants stay pewter as the Cowboys stay in traditional home white. Still, it works.

#1. Bengals-Redskins: Bengals in white/black and Redskins in burgundy/yellow. Aaah, this is so good. A load of color, orange, white, black, burgundy, yellow. Sorta autumn-like. A dang good matchup!! 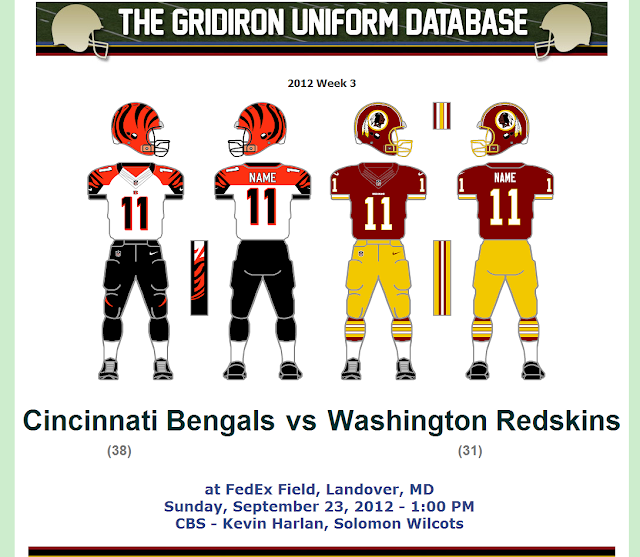 Last week, I set off on a journey hypothesizing if each of the current teams were playing, right now, in the era of long sleeve jerseys and leather helmets. After establishing some ground rules guidelines that I'd follow during the process, I began by displaying the teams of the NFC North.

This week, as promised, I present my renditions of the NFC East.

The NFC EAST
DALLAS – This was one of my favorites to do, mainly because of my frustrations with Dallas’ current combos and their inconsistencies.  When Dallas first began they were royal blue and white. I went with that but added silver/grey pants to make them less Colts-like. I used the same stripe pattern from their current home white jerseys minus the useless black outlines. Large 1-color block numbers work now and would work then. Then an epiphany struck. What if Jerry Jones was the owner back then? He would have made a way for his team to stand out. Therefore, I made Dallas the only team to sport logos. I put a small star in the middle of each sleeve stripe. I went a bit further after that. If you’ll notice the helmet, I added 5 white stripes to the blue helmet. When seen from above, this would appear as a 5-pointed asterisk (*) or star. Dallas may have become one of those teams (like the Eagles of the 40s) that bounced back and forth between the two jerseys all season. 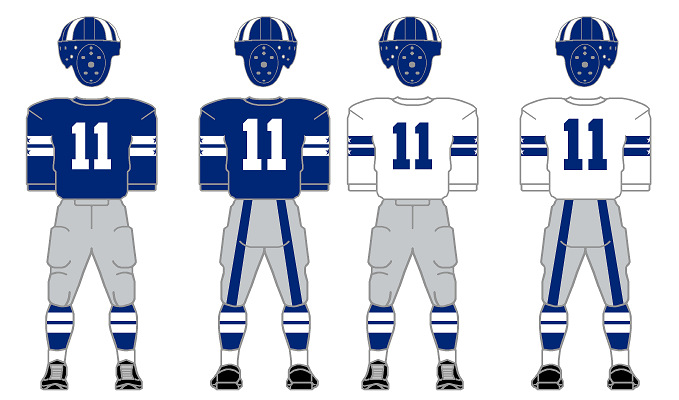 NY GIANTS – Grey pants? Check. Blue and red versions of the same jersey? Check and Check. Red and blue helmet to go with both combinations? Check. 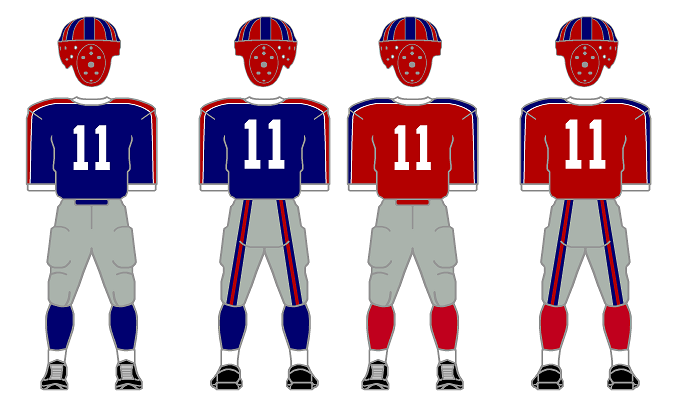 PHILADELPHIA – The silver wing and stripes on the green helmet reminds me of the era’s 2-tone helmets. My favorite Eagles design has always been the late-70s to the early-80s design with the sleeve stripes.  Having full sleeves was the perfect canvas to recreate those awesome stripes. Nobody did sleeve stripes like Philly did. 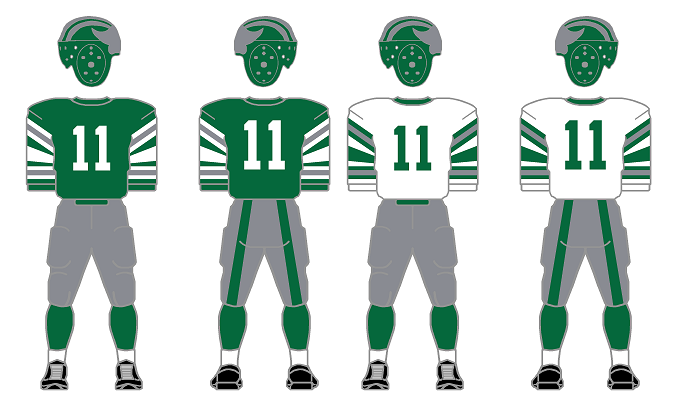 WASHINGTON – If Minnesota was my favorite, these come in a close second. I like the look of the darker burgundy paired with the Vegas-gold from the late 40s through the 60s. The sleeve and sock stripes are the 80s style but in the new/old colors. I loved the thin stripes in the cuffs from the mid-30s and added them here. I dig the Pittsburgh Pirates number font the Skins wore from the late-40s to the early-50s. A very cool look. 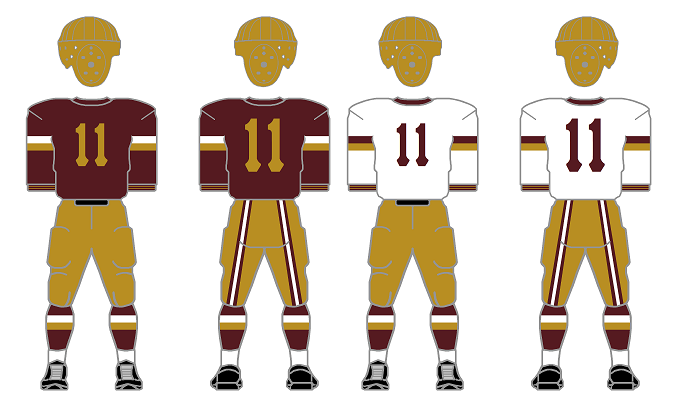 Next week, I will continue with the NFC West.  Stay Tuned...
Bill Schaefer