And here's Round 2 of the NFL Playoffs:

#4) Colts-Patriots:  IND in white/white, NE in navy/silver.  One part of me says this is great.  The total vanilla look of the Colts, all that white with blue stripes, numbers and socks the only thing keeping this from white out conditions.  Mouth watering...no.  The Patriots look stands on its own because we see this uni so often at this time of year.  We come to expect it, this silver, navy blue and a dash of red.  So, pair this up with the Colts generic template, and one side says yes, while the other side says no.  And I am leaning heavily on the other side.  So, I have to rank this game as the fourth of the four (four on the floor??). 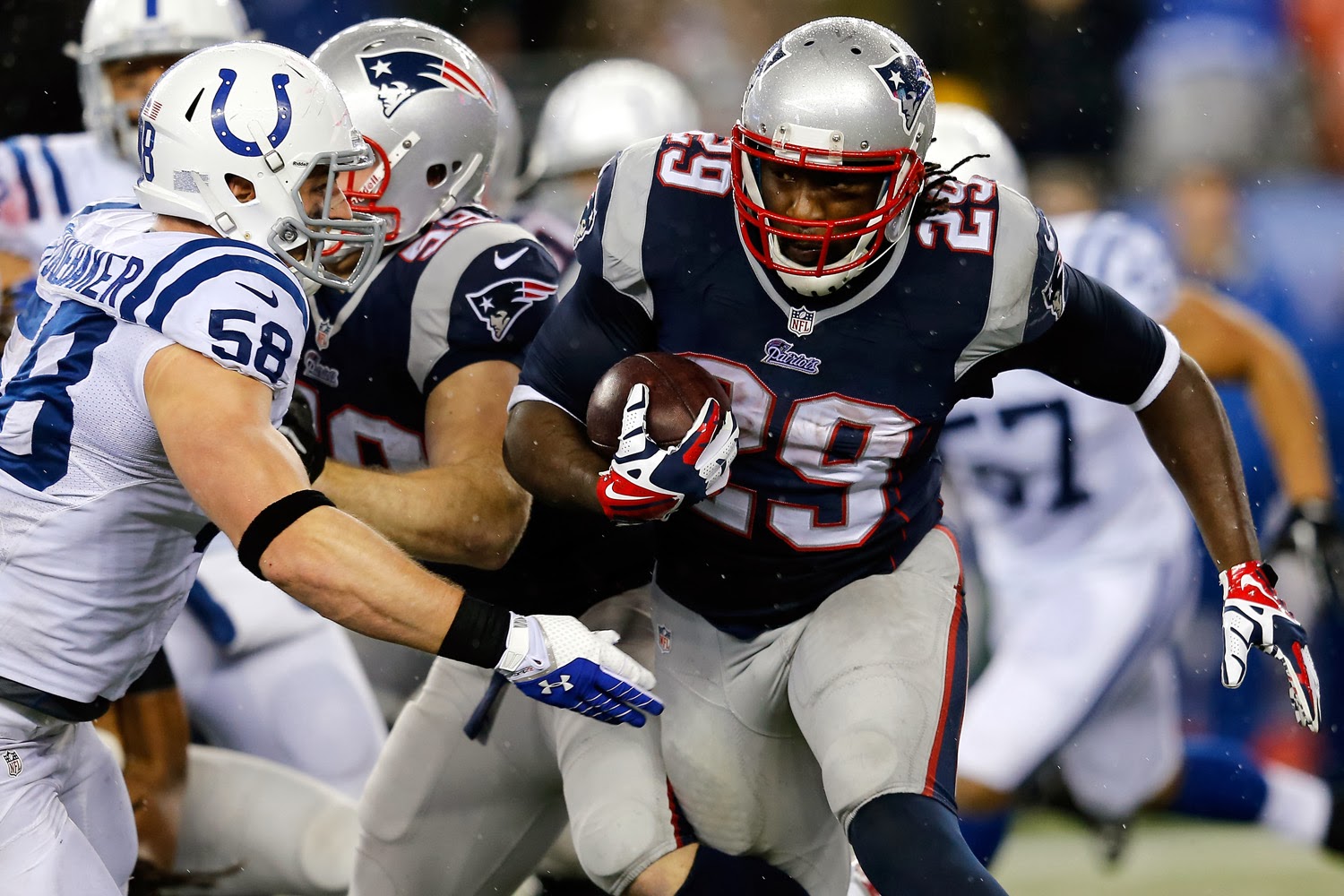 #3) Saints-Seahawks:  NO in white/gold, SEA in navy/navy.  Last week, the Saints took the field in Philadelphia in white over black and it was good.  This weekend, the Saints took the field in Seattle in white over gold and it was good.  Why?  Well, the Eagles had white pants in the first game, and I found the jet black pants of the Saints as a soothing contrast to white bottoms.  This time, I found the gold pants to be an equally nice contrast to the Seahawks in the all navy get up.  If the Saints had worn the black trousers in this matchup, it would have been top - er - bottom heavy in darkness.  But not the case.  The Saints blended well with the light and white touch against the Seahawks in the navy with neon green and hunter gray trim.  Looks good. 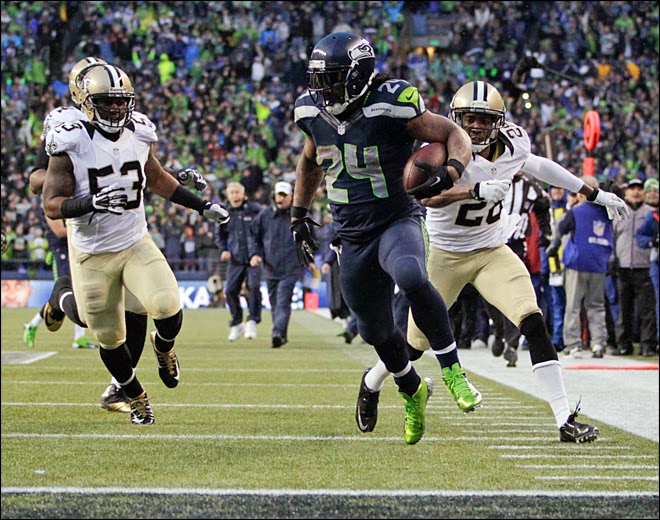 #2) 49ers-Panthers:  SF in white/gold, CAR in black/black.  Ironic, isn't it, that those voices who bellow about how disgusting, high schoolish, yucky the monochrome look is, and yet, when the Panthers wear this gorgeous set is, the same folks crow about the awesomeness that is the Panthers in all black.  I must chuckle at the folly of this.  Anyway, yesh, the Panthers in all black is sharp as a tack. Coupled with unusual color elements like a silver helmet and vivid carolina blue socks, this is probably the best of the monochromes out there.  Now, it's up to the other team to make this pairing amazing.  The Niners do it justice, with the gold helmet and pants, bright red socks and red trim on the white jerseys.  I can't quite call it amazing, but I can call this matchup pretty frickin' cool. 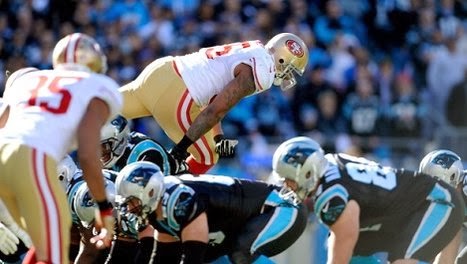 #1) Chargers-Broncos:  SD in white/navy, DEN in orange/white.  The regulars know that my favorite uni for 2013-14 is the Packers in green and yellow.  My runner-up is the Broncos in orange over white.  Making this the primary uniform of the Broncos was such an obvious move, but such a necessary move.  The orange is so vibrant, so crisp, that it make this uni almost as good as it gets, color-wise.  Paired with the Chargers in white over navy, which is my favorite look for the Chargers...except when they dig out the lovely POWder blues.  Combined, this is a powerful look, with the only real flaw being a bit heavy on the navy.  But on the Broncos, it is kept to the helmet and socks, so navy is not too much, and there's just enough orange to crush it. OMAHA!! 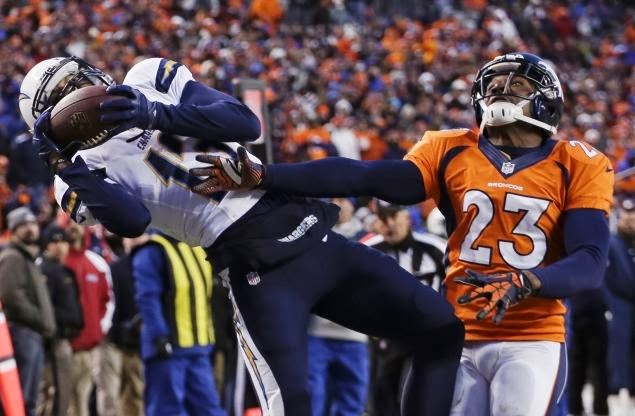 Next week, the Championship Game rankings. Be there. Aloha.

A small bit of shameless self-promotion can’t hurt too much.

Back when Tim Brulia and I began putting the pieces together for what would become the GUD with Rob Holecko's help, one of the aspects that I always wanted to include was a portion of the site that would be dedicated to showing what the weekly uniform match-ups were for every week of the regular and postseason for as far back as we could manage.

After accumulating the required information using many far flung resources as Google News, newspaperarchives.com, the Library of Congress, youtube videos, and private collections of NFL photos from GUD members like Larry Schmitt, I wish to inform the GUD viewership that, with the exception of approximately a dozen games (NFL and AAFC) from the 1940s, we know what every other NFL, AAFC, and AFL game looked like from 1940 through the current action leading up to this season’s conclusion in New York City.

At this time, GUD viewership can seek out the weekly uniform match-ups from the 1970 NFL-AFL Merger forward. Several additional seasons have also been completed from the Pre-Merger Era. Currently, Tim and Rob are working together to get the latter half of the 1960s installed and soon after follow up with the rest of the 1960s for both the NFL and the AFL.

Once they reach as far back as the 1950s, in theory, things should progress at a fairly good rate as we will only be dealing with the limited number of NFL teams each week. In other words, less work for each season will be needed.

After that will come the rest of the 1940s, which will likely be the ‘swan-song’ for this aspect of the GUD. Due to pro football’s status as a ‘second rate’ sport behind baseball and college football, less attention was placed towards the League and newspaper exposure, the backbone of our research for the weekly match-ups, was spotty at best.  It is extremely unlikely that we will ever get to the point where we can add contests from the 1930s to this project.