16) Titans-Colts: TEN in white/white, IND in blue/white. Three words: Too. Much. White. That is all. 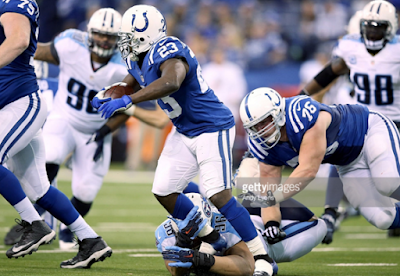 15) Ravens-Bengals: BAL in white/black, CIN in black/black. Three words: Too. Much. Black. That is all, 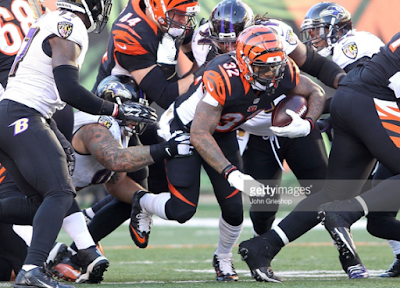 14) Steelers-Browns: PIT in white/yellow, CLE in brown/white. It's decent, but until the Browns do something about the near unreadable orange numbers on brown jerseys, this will continue to drag all others into the rabbit hole.

13) Jaguars-Texans: JAX in white/black, HOU in navy/white. A modern matchup that leaves me a little empty. Mind you, these aren't bad combos, but something gets lost when they're paired up.

12) Raiders-Chiefs: OAK in white/silver, KC in red/white. A lot - likely most - of my peers think this one is dandy. Not me. I just find the Raiders white jerseys really dull. The Chiefs in red? Sweet, of course, but the more I see this matchup, the more my senses dull.

11) Seahawks-Cardinals: SEA in alternate gray/gray, ARI in red/white. I'm still not sure about the all gray of the Seahawks. Personally, I'd kinda like to see the gray tops mixed with either the white pants or the navys, just for a bit of variety. Cardinals? um, yeah, red over white. 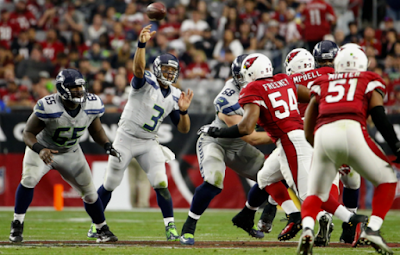 10) Saints-Falcons: NO in white/gold, ATL in red/white. It's a good one. Not so great. The Falcons have a sharp color combo (though the swirly trim leave a lot to be desired) when in red. The Saints look swell in white over gold. Together. I'm not too thrilled.

9) Buccaneers-Panthers: TB in white/pewter, CAR in black/silver. Dullish, but the spark of the bright trim colors on both sides (red, silver, orange, light blue) keeps this one from the nether reaches. Better than I would normally expect.

8) Lions-Bears: DET in white/silver, CHI in navy/white. Sharp, but not quite the same as if the colors were reversed. But, it's NFC North and that's half the battle.

7) Eagles-Giants: PHI in white/green, NYG in blue/gray. Thanks, Eagles, for the green pants. Sets up well with the Giants blue over gray set. Make this one a better than average battle. 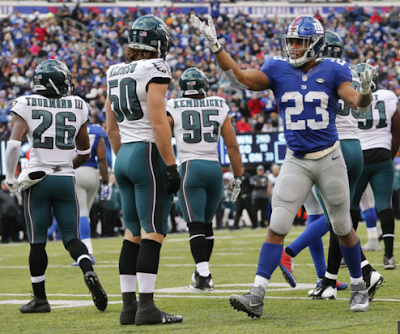 6) Redskins-Cowboys: WSH in burgundy/yellow, DAL in white/mint, We saw this one earlier. It's a great one, but I wish a slight tweak would be in order to ease the potential of monotony. Such as the Cowboys in the color rush white britches, or the 'Skins in their "throwback" white trousers?

5) Rams-49ers: STL in white over navy, SF in red/gold. Smart of the Rams to go with the navy pants. Offers sharp contrast and lets the colors flow brilliantly. Keeps the onus of the gold on the Niners,w here it belongs. Pushes the navys and reds to the forefront and that's a boost.

4) Chargers-Broncos: SD in white/navy, DEN in orange/white. On a combo I like, like the Broncos in orange, it takes a near disaster or something that just doesn't work right by the opponent to downgrade (see last week against the Bengals). The Chargers white over navy, while not high on my food chain, seems to add the right amount of spice to this uni dish. So, it's a winner. 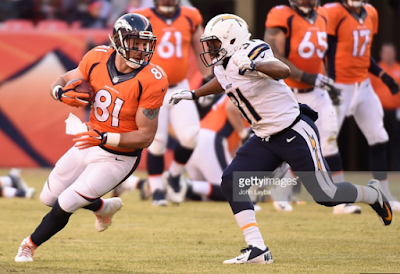 3) Vikings-Packers: MIN in white/purple, GB in green/yellow. Like this one, almost love it. Very similar matchup style when the Bears invade the Frozen Tundra. But I feel navy and orange blend better than purple and yellow do against green and yellow. Still, as long as the Vikes go with purple pants, this will always score big on my watch. 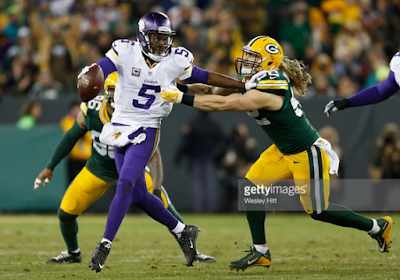 2) Jets-Bills: NYJ in white/green, BUF in blue/blue. Remember earlier in the season when the NFL begat Color Rush with these two? Well, we got ¾ color rush here. white over green and all blue and frankly, this looks a lot better. Some might prefer the Bills in blue over white, but the more color the better. And not contrived, either. 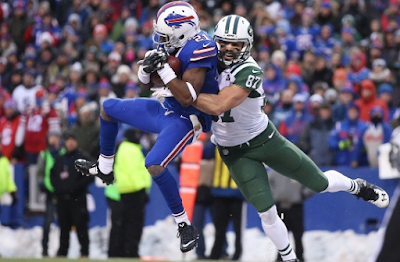 1) Patriots-Dolphins: NE in white/navy, MIA in aqua/aqua. Well, it took the better part of an entire season, but the Dolphins finally showed their potential. Instead of the dreadful all whites, the Dolphins make the most of their unique shade of darkness with full on aqua. Just so much better and it really accentuated the Patriots white over navy and breathes some life into that predictable set. Koo-does!! 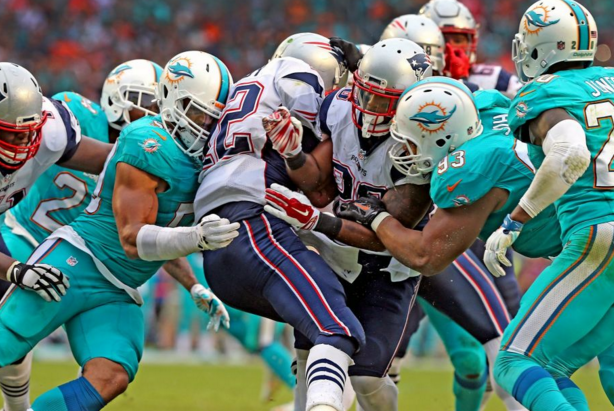 Thanks for putting up with my thoughts for the season. I'll continue with the Wild card games next week. See ya then!
5 comments