As we delve deeper into the 2013 NFL Season, we have this latest batch of uniform matchups.

15)  Titans-Seahawks:  TEN in white/navy, SEA in navy/navy.  Nope, doesn't work.  Just too much navy.  One helmet, one jersey, two pants, too socks.  Titans just absolutely should have worn columbia blue pants.  Would have been so much better. 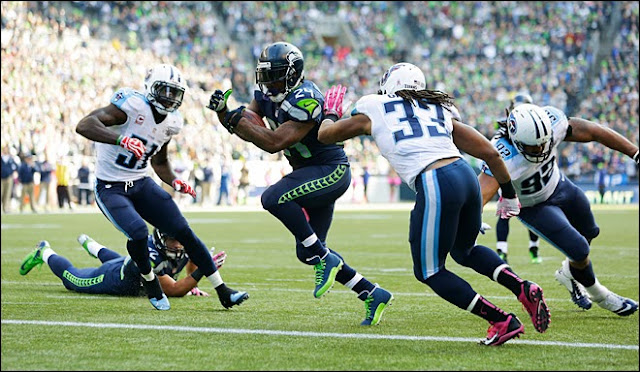 14)  Eagles-Buccaneers:  PHI in green/white, TB in white/pewter.  This is so-so.  Nothing bad, really.  Eagles look good in green over white, the Bucs look pleasing in white over pewter.  Maybe a little something new, like the Bucs in ...red pants?  Anyway, another case of two good sets of unis that together, just don't add up to really good.

13)  Rams-Texans:  STL in white/navy, HOU in navy/white. While gold and red add some buffer, there is still a bit much in the navy and white department.  This one game where the Rams recently ditched gold pants would have added a lot of mettle (medal?) to this matchup.

12)  Cardinals-49ers:  ARZ in white/white, SF in red/gold.  Lot of red, and in my opinion, could have used even more.  My thought is that if the Cardinals had rocked some red pants with the white jerseys, it would have given this pairing some major juice.  A lot of white, a lot of red and a little gold is a good thing, but my eyes would have preferred some red pants, Cardinal-wise.

11)  Raiders-Chiefs:  OAK in white/silver, KC in red/white.  This matchup we have now seen for decades.  It's a conservative pairing, but it does work for many.  Not the most in terms of color, just white, black, silver, red and a bit of yellow.  But most certainly not the most boring, either.

10)  Jaguars-Broncos:  JAX in all white, DEN in orange/white.  After last week in all navy, the Broncos return to the first class orange jerseys and go against the Jags in the Nikefied whites.  For the first time, from my eyes, the Jags black to gold helmet actually helps this game.  Not that it needed much when the Broncos sport orange, but the Jaguars uni is not a putoff...this week, anyway.

9)  Packers-Ravens:  GB in white/yellow, BAL in alternate black/white.  Unlike their fellow winged team, the Cardinals, the Ravens in black jerseys is much more of a fit.  Arguably, better than purple?  Matched with the Pack in white and yellow, it's a good matchup, but play this game in Lambeau instead of M&T Bank, and this would be electric with the Ravens in white and the Packers in green.  But we can take this one just the same.

8)  Steelers-Jets:  PIT in white/yellow, NYJ in green/white.  It's good to get the Jets out of that bland white from head to toe appearance.  So that alone turns this matchup up a few spots.  Steelers showing up in their whites that have lots of yellow trim and it's a good complimentary uni to a Jets outfit in green.

7)  Giants-Bears:  NYG in white/gray, CHI in navy/white.  Being a nighttime game, I was half thinking we could see the Bears in all navy, but da Bears stay true to form.  The Giants in the white with all the red and the gray pants.  Somewhat traditional, but a nice dependable look by both squads.

6)  Panthers-Vikings:  CAR in white/white, MIN in purple/white.  This one actually looks sharp.  The Vikes' purple jersey is really growing on me and it does pair up well with the silver, black and pale blue trim of the Panthers whites.  Nice and clean.

5)  Redskins-Cowboys:  WSH in burgundy/yellow, DAL in white/mint.  The fabled rivalry with the fabled matchup.  I always like this one.  The yellow pants add a grain of pop to this one and it just goes well with the Cowboys as always WAH combo.

4)  Saints-Patriots:  NO in white/black, NE in navy/silver.  Had the Saints worn their gold pants, it would have been a nice bit of symmetry between the metallic helmets and pants with the white/dark jerseys.  But then the Saints had to go and spoil it all with the black pants.  And what's wrong with that?  It gives this game an extra spark as far as I'm concerned. Enough gold and silver, but not in excess. Well played, NO!

3)  Bengals-Bills:  CIN in white/black, BUF in blue/white.  This matchup is a sweet one with the Bengals in the preferred white top and black bottoms, which goes quite well with the Bills in the perfect blue jerseys and the trims of red (Bills) and orange (Bengals) make for a good mix of colors without being overwhelming.  Thumbs up!

2)  Lions-Browns:  DET in white/silver, CLE in brown/white.  After last week's monumental brown on brown uni, the Browns settle down to more routine brown on white.  Paired up with the Lions in white over silver, this matchup still resonates as a classy twosome.  Add silver, orange and a touch of black, this game is suitable for framing. 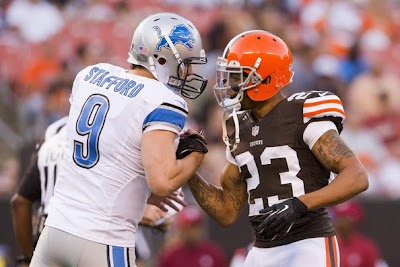 1)  Colts-Chargers:  IND in white/white, SD in alternate powder blue/white.  O yeah.  When the Chargers rocks the powders, the game automatically ratches up to (or near) the top.  It is such an electric look, and maybe that is why it is seen so rarely.  And it couldn't come at a better time.  The Colts all whites are quite dependent on the opponent's look.  And the Chargers deliver the goods with this dynamite look.  Winner! 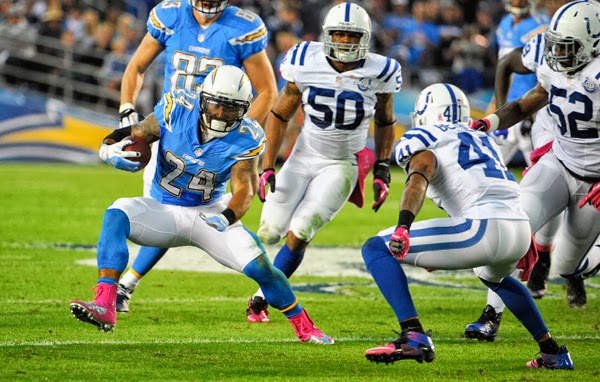 That will do it for this week as the season rapidly heads for Week 8.  Enjoy it!