A short while ago, Rob updated the site with a flood of revisions largely centered on, of all things, belts. (and still working on them, unfortunately -RH)  The situation began when I happened to be perusing the collection of “Mud Games” photos collected in a thread of our Forum. I spotted an image from the 1983 AFC Championship Game between the Jets and Dolphins. I noticed something that I had known to exist but I had actually not given it a single thought. I did some quick searching and came across a photo showing Jets’ quarterback Richard Todd attempting to elude the rush of Dolphins’ lineman Doug Betters. Clearly evident was my target – pants that showed the belt all the way around the player’s waistline. For lack of a pre-existing name for this bit of fashion, I began referring to them as ‘peek-a-boo’ belts (PABs, for short).
I remembered these belts vividly on several teams and was immediately troubled by the fact that we had completely neglected them up till this point. That was going to be something that would have to change.

A thread was organized on the Forum to answer the who’s and when’s of this situation. Our own Larry Schmitt was invaluable aiding me in the research. What began as a search for the Jets quickly began to include the Colts, Chargers, Patriots, Bengals, Falcons, Bills, and Dolphins.  A summary of that research can be found in the thread “Unusual pants (did that get your attention?).” 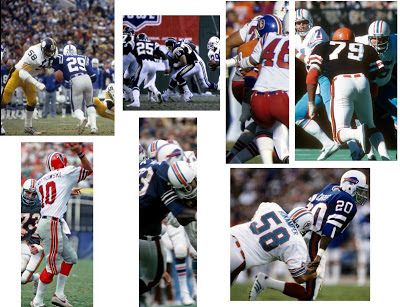 For me, an interesting thing is how this research led to other belt-related/unrelated discoveries that also needed attending to.  While efforting to discover the origin of the Jets’ PABs, we discovered the first year of their existence was the Super Bowl III season. However, just one year earlier, they were wearing regular white belts that we had incorrectly been displaying as black. Now we had to find how far back these white belts went. Sure enough, they went all the way back to the first year of the Jets after they ceased being known as the Titans. But that was not all.
Larry’s keen eye noticed some discrepancies among the pants stripes. We had been displaying a single pants stripe appearance over this entire generation. Larry noted that not only did the thickness of the green stripes have different variations but he also found that the separation between the stripes also included changes in the size of separation over the same period of time.

After about ten days of research, I began making the required changes to our site’s yearly images.

But the story doesn’t end there.  A few weeks ago, Larry sent me a harmless little email saying that he had innocently found another belt situation that needed attending to. After viewing his proof, I agreed, and made the changes. But as with the PABs, while researching one thing, you often stumble across more.  And he did.

After viewing photos of Earl Campbell and performing a little more digging, Larry had found that the Oilers matched their belts to their pants in all situations after doing away with the grey/silver pants beginning in 1972. In fact, when Houston moved to Tennessee to become the Titans, they continued this trend, another item we had missed as GUD had been displaying navy belts for all of the Titans’ combinations since 1999.
Similar discoveries soon followed for New Orleans, Pittsburgh, Tampa Bay, Seattle, and Washington. These (and other) corrections will be appearing shortly in the Update section.

While not extremely difficult corrections to make, they were disturbingly time consuming. And while I was sitting at my PC making all of these changes, my mind began to wonder ‘how did this happen?’ I mean the PABs were one thing. We had completely neglected this style that was fairly prominent for some teams for a large chunk of their existence – in some cases twenty to thirty years or even more.

But the color of the belts? How did we miss these? A light bulb went on and I had my answer. If you have read “About The Template” for GUD, you know the history of how I came to use this particular model for the construction of our template. When I first found it, most of the drawing had substantial errors. Some colors weren’t quite right, several helmet logos were too big, collars contained the NFL shield instead of the NFL Equipment logo, certain teams that would wear the 50th Anniversary patch had the wrong color patch, and the sleeves were too long for the era being described.

But I never thought to question the belts. Whatever was already in place there, that's what we blindly kept. It was the one part of the uniform we never really thought about for the modern age and that's my fault. So I guess I can only get upset with myself for missing these to begin with years ago. I took it upon myself to go back and check through the rest of the teams we hadn't already caught over the last few months as being erroneous. In a single afternoon, I uncovered additional errors for Arizona, Baltimore, Buffalo, Carolina, Cleveland, and Houston and put all of my 'suffering' into one day making the corrections. After all, our motto around here is "Just get it right."

It takes a sense of humor to do this. When we finally finished (hopeful and with fingers crossed!) with this most recent batch of belt amendments, Larry asked if since we were done with belts if we were next going to move on to chinstraps. It was humorous and I knew he wasn’t being the least bit serious (I hope!). The strange part was that moments  prior to getting that question posed to me via email, I had just been thinking of sending a similarly joking email to Larry asking if he would mind doing some research on the colors of wristbands and elbow pads!

Despite all that, I want to thank Larry not just for the help in locating these oversights but also for everything else he’s pitched in and assisted with over the last two years. After all, this work takes a special type of person.

“Honey, what‘re you doing on the computer?” “ Oh, just researching football belts.”
- actual excerpt from a conversation in the Schaefer household