16) Cardinals-49ers: ARI in white/white, SF in alternate black/black. Niners, please spare us this horror after this season for good. The impossible to read red numbers on a sheet of jet black jersey. The senselessness of the matching black pants. The inability of the Cardinals to salvage some shred of decency by sticking with white pants instead of red. Yucky, yucky, yucky. 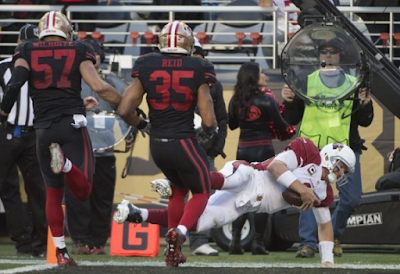 15) Dolphins-Jets: MIA in white/white, NYJ in green/white. This would have been the perfect occasion for the Jets to go green over green against the blah all white of the Dolphins. No such luck. Not enough to get me out of bed for this one.

14) Ravens-Browns: BAL in white/black, CLE in brown/orange. Two things save this from the crud-infested bottom of the barrel: 1) The disturbing all black of the Niners, 2) The repeated boredom of the all-white Dolphins. At least the Browns didn't burn the eyes with orange socks in this combo. Still, the nearly unreadable orange numbers on brown plunges this matchup into the depths. Ravens, your white over black combo is waster here.

13) Buccaneers-Colts: TB in white/white, IND in blue/white. Nope. Too much white for me. Had the Bucs worn the pewter pants, I think this would have moved up sharply as the bright blue Colts jerseys would have bounced nicely off the Bucs gritty pewter gear.

12) Saints-Texans: NO in white/gold, HOU in navy/navy. You know, this one doesn't quite work for me. Normally I like the occasional Texans monochrome. They don't do it that often, and it usually plays well. But not this time. The Saints offer pretty good contrast with the white over gold, but I'm just not feeling much love for this matchup. 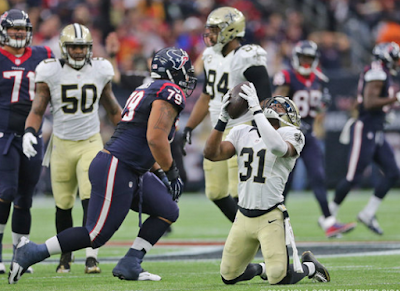 11) Chargers-Jaguars: SD in white/navy, JAX in black/white. Not sure what to make of this one. Certainly lots of unusual color combintions here. Navy, black, teal, powder blue, yellow, gold. Maybe too many similar shades and not enough true variety in the palette?

10) Panthers-Cowboys: CAR in color rush carolina blue/carolina blue, DAL in color rush white/white. The third installment of the color rush campaign, The Panthers look very sleek in the all carolina blue, but it looks a lot like last week's Titans color rushers. The Cowboys? Well, they love their WAH, so why not acquiesce? And, while the ode to the 1990's white fauxback jerseys are nice, and the pants with the blue/silver/blue striping is clever, the blank all white socks look the whole set ghostly. I just think the Cowboys unis don't work that well here. 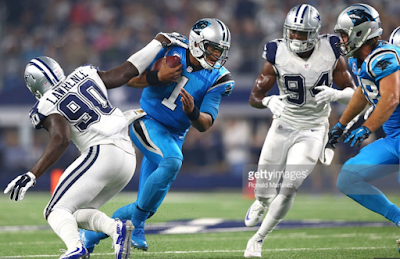 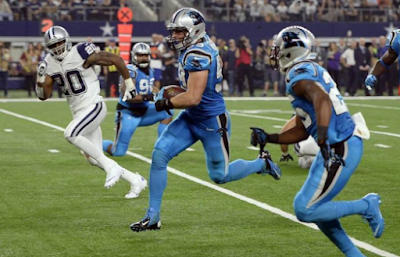 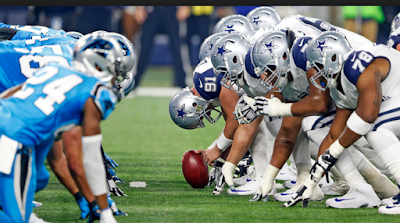 9) Raiders-Titans: OAK in white/silver, TEN in navy/white. One of the odd occasions where two rather mundane looking unis combine to make a rather worthwhile matchup. The Raiders rather yawn inducing white over silver combo seems to my eyes sparkle a bit paired up with the Titans good but not great navy over white set. I'm not complaining!

8) Steelers-Seahawks: PIT in white/yellow, SEA in navy/navy, Steelers in the standard with over yellow aways against the Seahawks in the all navy. It just comes across well to these peepers. Traditional versus modern with a good color contrast.

7) Giants-Redskins: NYG in white/gray, WSH in burgundy/yellow. Normally a sharp matchup, but getting a lost in the shuffle with a better than average matchup week. Jaded perhaps, by the frequency of the matchup perhaps, but this pairing will almost never be a bottom feeder.

6) Rams-Bengals: STL in white/navy, CIN in black/white. Good work, teams. Best possible color matchup for this game. Espouses the navy blue of the Rams with the pants and so as not to overcrowd darkness for this matchup, the Bengals wisely go with white trousers. Just the right mix of color and white, 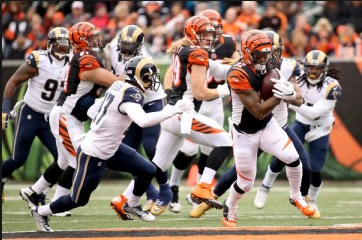 5) Patriots-Broncos: NE in white/navy, DEN in orange/white. A game where navy is not much more than trim, apart from the pants color of the Patriots. This is a well positioned platter of color, orange, silver, navy and red coming together quite smoothly.

4) Bills-Chiefs: BUF in white/blue, KC in red/white. It's tough to put this one as low as I did on the countdown, but this was a week of strong uni matchups. The vividness of the Bills blue is justifiably exposed and pits well against the brilliant Chiefs' red. The trim colors are perfectly muted. Sweet.

3) Eagles-Lions: PHI in white/green, DET in honolulu blue/silver. Boy, I do enjoy this one. Eagles always look sharp in the white over green and the Lions also look dapper in the honolulu blue over silver set. Traditional squads with bright features. A great way to get the turkey dinner started. 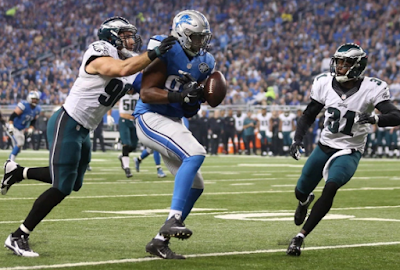 2) Vikings-Falcons: MIN in white/purple, ATL in red/white. Maybe the uni designs scream a little much 21st century, but the carry out effect of the colorways mesh wonderfully. A lot of red, a lot of purple, some black and a dash of yellow. 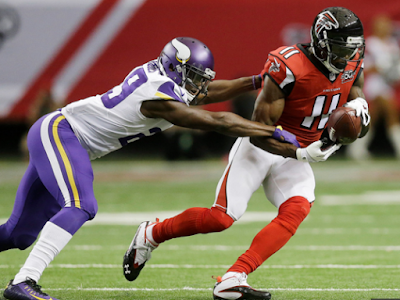 1) Bears-Packers: CHI in white/navy, GB in green/yellow. If you have been a faithful reader of these weekly rankings, you know that this encounter is usually my favorite. It simply scores on all counts, design, tradition, mixture of colors, etc. It just works perfectly and is my idea of what a uni matchup should be. 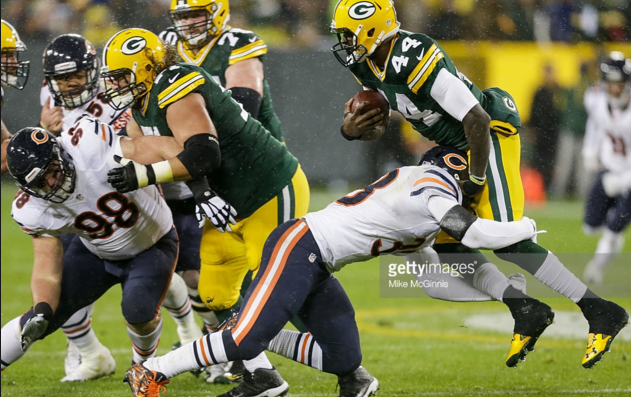 Back atcha next week. See ya later!