16) Rams-Buccaneers: STL in navy/navy, TB in white/white. The all navys versus the all whites. Drat. I for one, think this would have a week winner if say the Rams go white over navy and the Bucs do a red/pewter look. But because it's early in the season, Bucs do the WAH and we are all the poorer. 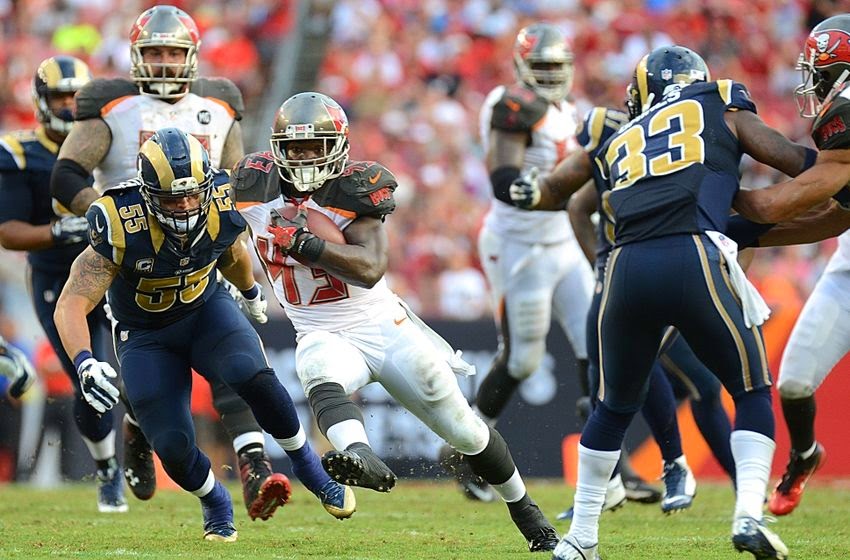 15) Dolphins-Bills: MIA in aqua/white, BUF in white/white (throwback). Any excuse for the Fins to wear aqua is a good excuse. In my childhood days, I really didn't like the aqua. Decades later, I have grown quite fond of the color. Bills would normally score some points with me in the throwbacks, but alas, it's the all whites at home no less. Too much white for my eyes.

14) Eagles-Colts: PHI in white/white, IND in blue/white. The Eagles, perhaps influenced by their green issues with their jerseys, are keeping green out of the picture for the time being. And that's unfortunate, because green pants would have certainly helped this matchup loads. The Colts certainly in their better combo of blue over white.

12) Saints-Browns: NO in black/gold, CLE in white/white. While there's a nice set of unusual colors coming together (gold, brown, black and orange), and they are all presented in the best possible way, I am just not feeling it, Mr. Crabs.

11) Texans-Raiders: HOU in white/navy, OAK in black/silver. Until 2008, the Texans routinely wore red socks with their white over navy combo. A detail not lost me whatsoever. That little detail used to spark that uni aplenty. Now, it just dulls me. Sorry, the silver and black does not salvage this matchup.

10) Steelers-Ravens: PIT in white/yellow, BAL in purple/white. I guess it's a little early in the season for the Ravens to go all dark, but the prime time game at least gets them to don purple. There's a fair amount of black, but the purples and yellow with a breath of gold give this matchup a moderate color palette.

9) Lions-Panthers: DET in honolulu blue/silver, CAR in white/white. Rather odd to see a bluer shade of pale dominate, but that's not really so bad. Silver and black to accentuate.

8) Cardinals-Giants: ARZ in white/white, NYG in blue/gray. A little early for red pants, I suppose, but I'm liking this gathering of blues, reds and grays. Plenty of Cardinal white, but the red trim and Giants blue and gray cancel out the white fatigues. 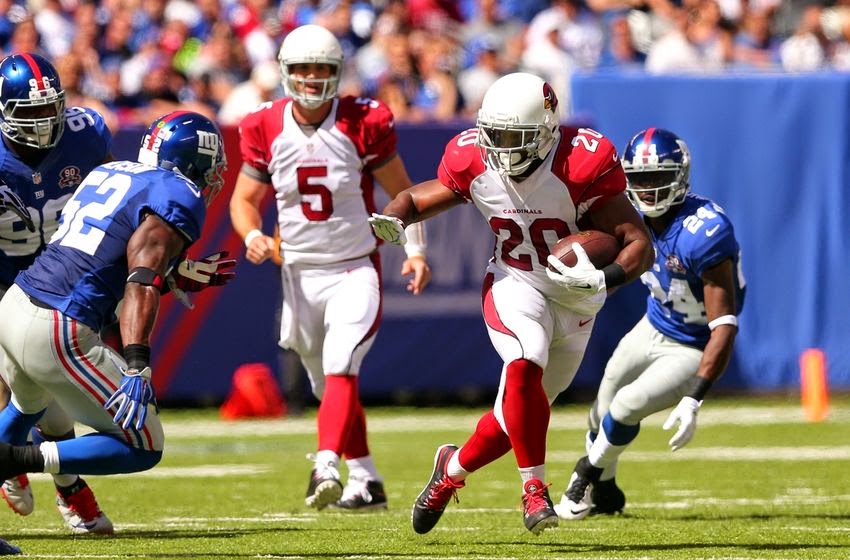 7) Falcons-Bengals: ATL in red/white, CIN in white/white. As a carryover from previous seasons, as much as I find the all white Falcons meh, I do indeed like their red jerseys. Bengals in early season WAH mode, find the right mix of black and orange trim. Rarely seen matchup, but nicely played.

6) Cowboys-Titans: DAL in navy/silver, TEN in white/navy. How 'bout them Cowboys in their too rare dark topped combo?! And the Titans in their white jerseys with those navy bottoms? This is a goody from where I sit!

5) Jaguars-Redskins: JAX in white/white, WSH in burgundy/yellow. A 180° turn for the Jags from last week's all black look, But it's working here. The mish-mash of teal, gold, black, yellow and burgundy sinks in well with this reporter.

4) Chiefs-Broncos: KC in white/red, DEN in orange/white. The only other normal matchup that I can think of off-hand that I like more than this one is CHI at GB. There is just something about this baby that makes me so glad I'm a uni-nerd. Colors and uniforms that are done 100% right.

3) Patriots-Vikings: NE in white/navy, MIN in purple/white. The Vikings are spending a full home season outdoors for first time since 1981. And, if anything, it will make those purple jerseys seem brighter in natural daylight. Nice load of colors for me, purple, navy, silver, red and yellow. Likey. 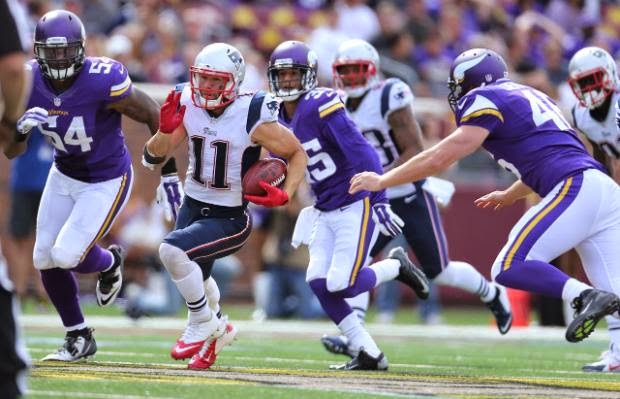 2) Seahawks-Chargers: SEA in navy/gray, SD in white/white. OK, I admit to being a sucker for what may be normally dull, but when the rarity of the situation breaks out, even it IS dull, I get excited. Such is the case with this game. Seahawks in a truly rockin' combo going against the Chargers in all white. Meh + Meh = Whoa? Yeah. In this case, Yeah. 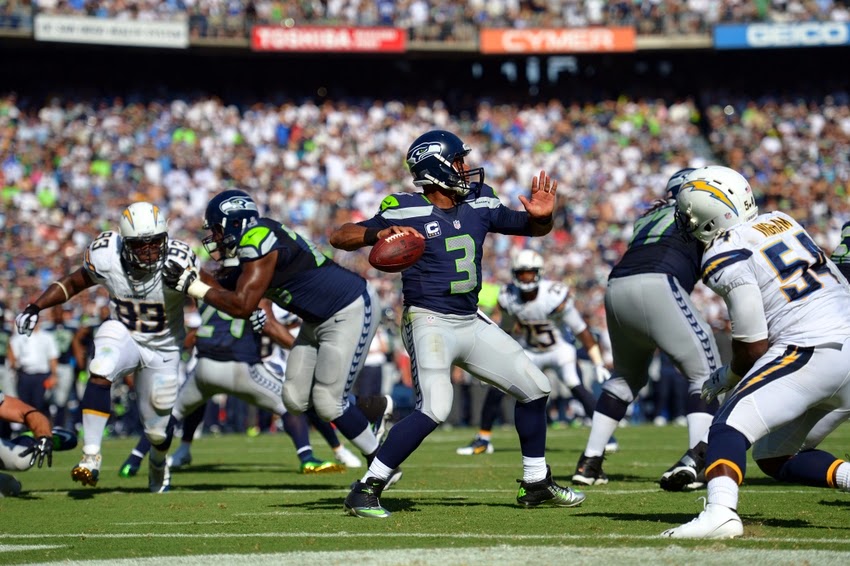 1) Bears-49ers: CHI in white/navy, SF in red/gold. This all comes together in nearly perfect harmony. Navy as the heavens intended, orange a perfect compliment, brilliant scarlet with perhaps a slight overtaste of gold. Brought together against a brand new stadium on lush green grass and my football brain is sated to a T. 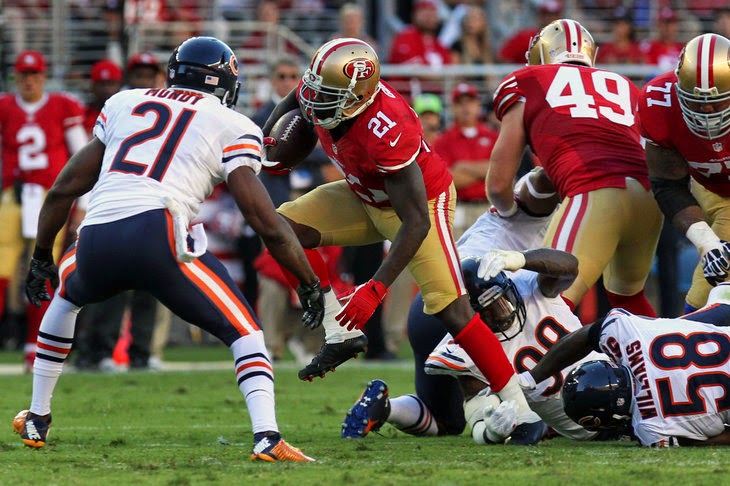 Yours in unis,
Timmy B