Welcome to the 2013 edition of the Gridiron Uniform Database (GUD) Matchup Rankings.

The rankings are based on the personal opinion of Tim Brulia, lead historian of the GUD, and do not necessarily reflect the opinions of Bill Schaefer, the GUD's graphic engineer, or Rob Holecko, the GUD's webmaster.  It is simply an exercise in fun and not to be taken too seriously.

16) Raiders-Colts:  OAK in white-silver, IND in blue/white.  Looks that have not changed much, if at all, in eons.  No flash here, not a great deal of color, either.  Standard Raider white jerseys with no trim.  Standard Colt blue jerseys with only truncated white shoulder stripes.  The old guard may think this is classic, but I tend to think otherwise. 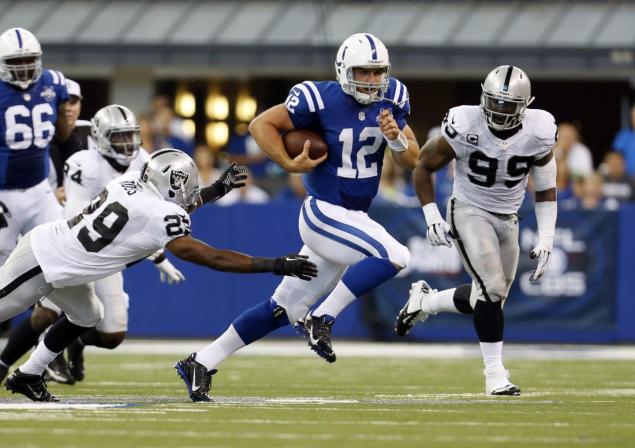 15) Buccaneers-Jets:  TB in red/pewter, NYJ in white/white.  This game was a bit disappointing.  TB looks better in red jerseys with white pants.  The Jets in a look (white from head to ankle) that is very much my least favorite.  I don't mind the Jets in WAH, but either green pants or even green socks would have saved this game from the heap.

14) Texans-Chargers:  HOU in dark blue/white, SD in white/white.  Like last year, the Chargers open the season in white at home (WAH) that includes white pants, a look popular with some, but not with this observer.  Not even the Texans in their sleek blue tops and white pants can save this matchup from the lower rungs.

13) Cardinals-Rams:  ARZ in white/white, STL in navy/navy.  Only the Cardinals red socks kept this matchup from being a full-on monochrome-a-monochrome battle.  I do appreciate a total monochrome battle, but it comes at the expense of bountiful color, only trim.  Gold, black and red are merely bystanders here.

12) Dolphins-Browns:  MIA in white/white, CLE in brown/white.  Dolphins in their first official game in the new all whites, and the Browns apparently going all season in brown at home.  Would have much preferred the 'Fins in aqua pants, but I will give them a little pass, the aqua socks do help a bit.  Browns helmets make up for the loss of Dolphin orange.


11) Falcons-Saints:  ATL in red/white, NO in white/gold.  Saints, as has been the norm the last several years, open wearing white at home.  Falcons trot out the vibrant red jerseys in response.  I like this matchup, but I can't give it love.

10) Giants-Cowboys:  NYG in blue/gray, DAL in white.mint.  NBC must like these two on Kickoff Weekend.  Traditional matchup. Plenty of blue to go around and the Cowboys in their usual fifty shades of grey.  Just a dash of red from the G-men to avoid a blue-gray wash.  Just an average matchup from my eyes.


9) Bengals-Bears:  CIN in white/white, CHI in navy/white.  With the weather balmy, the Bengals go for the all white look, BUT toss us a surprise by going with orange socks instead of the normal black to accessorize.  The Bears meanwhile, stick to the traditional navy tops.  Not quite a classic, but certainly not a fiasco, either.

8) Titans-Steelers:  TEN in white/navy, PIT in black/yellow.  Titans pull off a look they haven't used since Week 6 of 2011 by wearing navy pants instead of the columbia blues with white jerseys.  Steelers in the very standard black over yellow.  I actually think the Titans should have stuck with the light blue legs.  Still, I find this one visually appealing.


7) Packers-49ers:  GB in white/yellow, SF in red/gold.  Reprising a playoff uni matchup battle from last season, the look is traditional, more or less.  The Niners continue to wear the goofy cut off triple stripes on the sleeve holes, yet the Packers wear stripes with a perfect cut.  The colors mix nicely with the two squads showing off various shades of gold.  Do like that bright Niner scarlet!


6) Patriots-Bills:  NE in white/navy, BUF in blue/white.  Traditional rivals, themed in similar colors, but no longer similar tones.  Since the Bills rebrand on 2011, this matchup seems to have improved, aesthetically.  I just love that blue that the Bills wear!  Pats in their now defining look.

5) Ravens-Broncos:  BAL in white (jerseys)/black (pants), DEN in orange/white. The season starts with a replay of the 2012 divisional playoffs.  The colors are varied and the Ravens oblige by wearing black pants instead of the whites.  The Broncos orange brightens things up well.  A nice matchup.

4) Chiefs-Jaguars:  KC in red/white, JAX in white/white.  20th century, meet 21st century.  Chiefs in one of the more timeless unis in the NFL, their bright red helmets and jerseys, meet up with the Jaguars and their black to gold transition helmet and the jangly mix of teal, gold and black trimmed white jerseys and pants.  The sensible against the senseless.  Don't ask why, but I just think this one works.

3) Seahawks-Panthers:  SEA in navy/gray, CAR in white/white.  Panthers - as always - start off the season in white and except for a foray or two in Carolina blue, will stay with WAH deep into the season.  The Seahawks rock a really sweet combo that was only seen once last year (at...Carolina!).  It bounces off well from the Panthers all whites.

2) Eagles-Redskins:  PHI in white/green, WSH in burgundy/yellow.  This could have been a white-white pants struggle, but instead, much to my delight, both squads go with color!  Eagles in the green pants and the Skins in yellow pants.  With that, the colors burst forth, green, black, silver, burgundy and yellow.  Nice matchup that could have been much drabber.


1) Vikings-Lions:  MIN in white/purple, DET in honolulu blue/silver.  Expecting the Vikes to go all white (yawn).  Then I see the bust out the purple pants (wide awake!!!)!!  Yay-yuh!  Couple that with the sweet Lions honolulus, it's a winner! 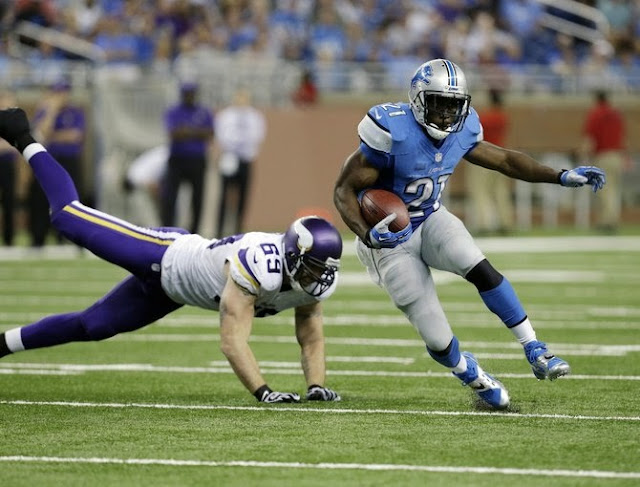