Sorry for the delay, fans. Life gets in the way sometimes...

#16. Jets-Bills: NYJ in all white, BUF in blue/white. Another invasion of the whites. Only the Bills in blue jerseys and socks saves this from a total whiteout. I could have stood at least green pants on the Jets and/or possibly an all blue look for the Bills that would have catapulted this game to the upper ranks, No, bottom feeder matchup.

#15. Jaguars-Titans: JAX in white/black, TEN in light blue/dark blue. I know I've come down hard on the Jags for the switch from teal to black. And, rightfully so. Here, they did the only right thing by going with black pants instead of white. It still doesn't help much. The Titans in two-tone blue saves this still mediocre matchup.

#14. Raiders-Chargers: OAK in white/silver, SD in navy/white. West Coast rivals since 1960, the unis here offer no surprises. Powder blue by the Chargers would have been a spicy mix, but the Bolts already met their quota with those earlier. As such, can't really move this up the Brulia scale that much.

#13. Ravens-Bengals: BAL in all white, CIN in black/white. Lots of white when there could have been lots of black. I would have preferred a more even split of b&w. In particular, the Ravens in black pants. A little purple, some orange, a bit of black and a bunch of white. Meh.

#12. Dolphins-Patriots: MIA in all white, NE in navy/silver. Another team which kept its dark pants in hiding for 2012, and the Dolphins really could have used the aqua pants here. But alas, their unis - like their team - got pounded in this matchup. Pats make the traditional (at least in the Belichick era) uniform stand up here.

#11. Texans-Colts: HOU in white/dark blue, IND in blue/white. Lot of blue, straight (IND) and dark (HOU), punctuated by the Texans bright red numerals. Otherwise, this would have been a rather dull matchup.

#10. Panthers-Saints: CAR in all white, NO in all black. Apparently last week's sighting of the Saints in gold pants was a fluke. Would have preferred the gold britches here, but a solid black against a solid white was a little monotone for me.

#9. Rams-Seahawks: STL in all white, SEA in all navy. OK. Not much could go here. Rams made the right move by going with white pants as opposed to navy, cuz that would have made for too much deep blue. So, that scored a few points with me. Seahawks could have made this nicer with gray pants, but seem determined to make the all navy look THE home look for 2012.

#8. Browns-Steelers: CLE in all white, PIT in black/yellow. A matchup worn very frequently since 1968 or so, it hearkens to tradition and rivalry. It continues here. With orange dominating the Browns via the helmet and a heavy dose of black on the Steelers, you think of hard, tough games. And a nice matchup to boot.

#7. Eagles-Giants: PHI in white/green, NYG in blue/gray. No surprises here, nor should there be. The Eagles, who had flirted with an all white look a couple of times this season, go back to the right choice, the green pants. Giants, in their traditional look, make this one a beauty.

#6. Cardinals-49ers: ARZ in all white, SF in red/gold. For only the second season since 1989 (2008 being the other) the Cardinals keep the red pants in the dark. And I think for this particular game, it was a good move. It would have been too much red. And the Niners red shirts coupled with the gold pants ratchets up the list on its own.

#5. Cowboys-Redskins: DAL in white/mint, WSH in burgundy/yellow. If I'm not mistaken, I think the Skins were supposed to go with the throwback burgundy/khaki uni for this matchup. But with a winner-take-all event against their arch-rival on the line, I guess Coach Mike Shanahan wanted the Skins in more contemporary attire. And this was the right call. The throwbacks would have been eye appealing, but I certainly understand the motive. Cowboys? Pretty much what we've said for 14 out of 16 games this season!

#4. Buccaneers-Falcons: TB in white/pewter, ATL in red/white. The Bucs, kept the white pants in the closet for the full regular season (excluding the throwbacks, which doesn't really count), and at least for this game, it was the right move. Paired with the Falcons sweet red jerseys, this is a boffo matchup.

#3. Bears-Lions: CHI in white/navy, DET in honolulu blue/silver. Nice shades of blue and not too much. Silver helmets and pants. A taste of sweet orange and this, though quite traditional, rings out the year nicely for these two.

#2. Packers-Vikings: GB in whie/yellow, MIN in purple/white. Dang it, I like this baby. Purple in the right dose, Packer green and yellow as perfect trim colors and the right serving of yellow on the Vikes and this is a holiday delight!

#1. Chiefs-Broncos: KC in white/red, DEN in orange/white. Was fearful of a couple of things here...KC in all white, DEN in all navy. Fortunately, very fortunately, neither happened. Chiefs wore the all white only once this season (once too many for me), and the Broncos switch back to orange full-time this season shows what a shame it was for all these years (since 1997) to wear blue instead of orange. So, this was the best possible matchup and it was indeed, a very good thing.

That wraps up the regular season, matchup wise. We'll be back for Wild Card Weekend. See you then! 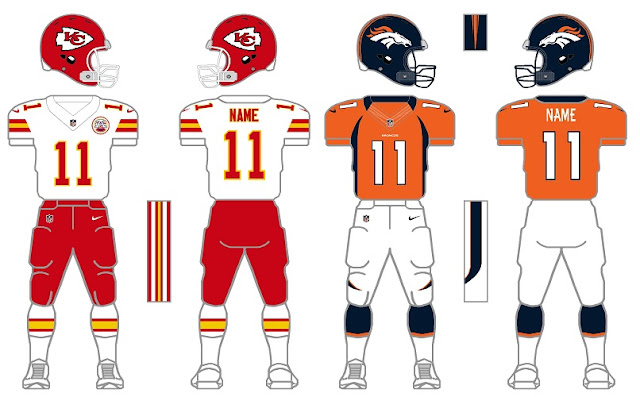 We are now getting into the most recent decade of title games. Let's Go! 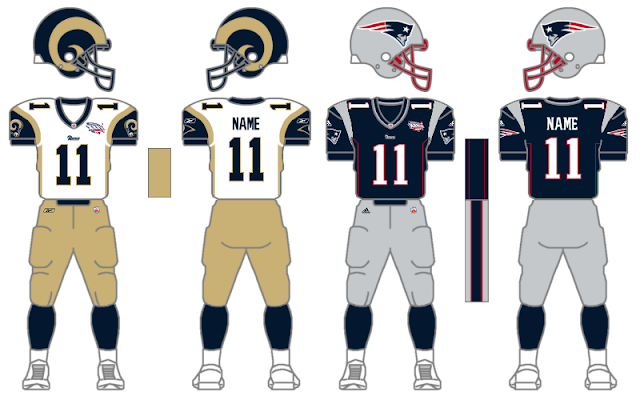 ACTUAL: This game had a nice balance of navy and silver paired with the gold of the Rams. It would have looked even better had the Rams not ditched the royal blue and yellow colors for the previous season. 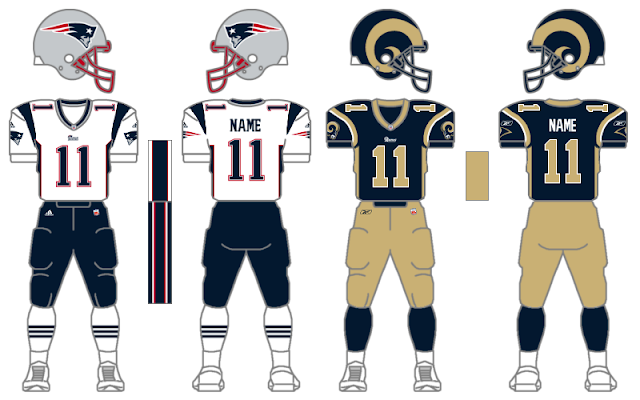 ALTERNATE: OK but the doubling-up on the navy blue comes in second place to the ACTUAL combination. 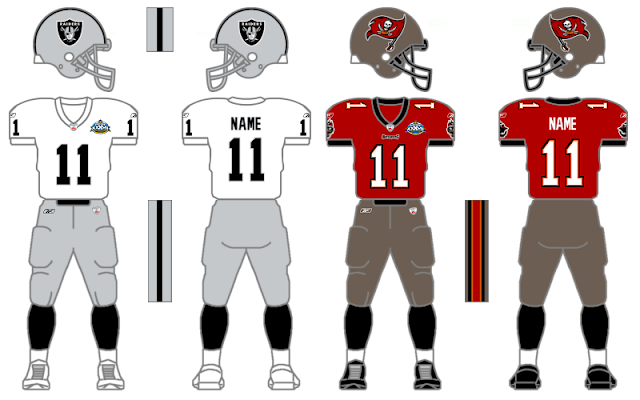 ACTUAL: If ever there was a game in which the outcome formulated my opinion of the uniform pairing, this may be it. Tampa Bay's red looked great. I can't imagine them winning and not wearing this combo. 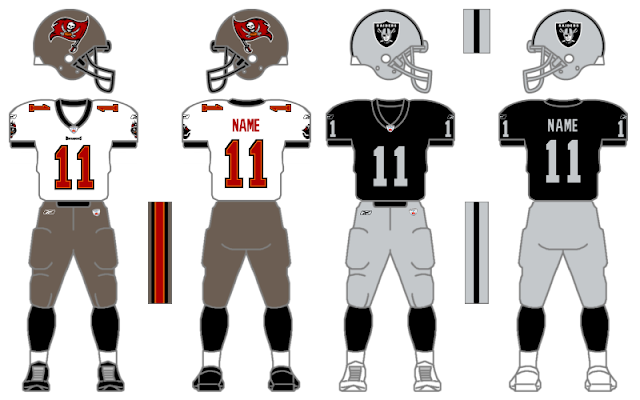 ALTERNATE: Likewise, had Oakland won, I would have hoped they'd have been in black. Red wins out here.
EDGE: ACTUAL 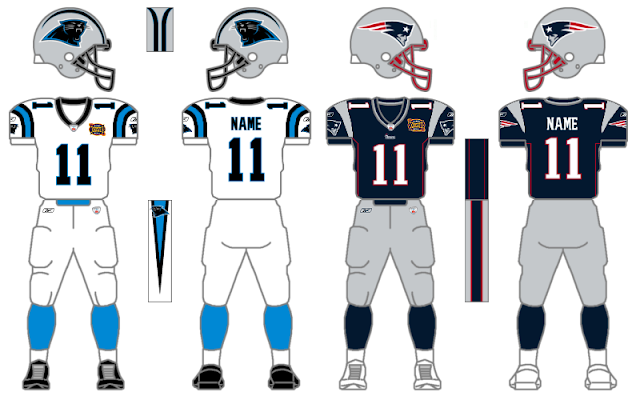 ACTUAL: I know some will question this but Carolina's mono-white combo may be the lamest uniform worn in a title game. 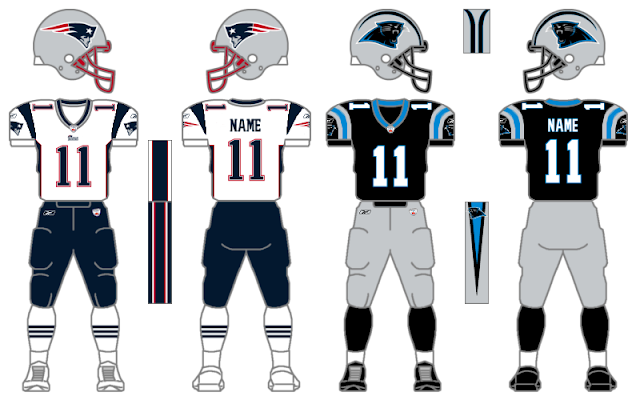 ALTERNATE: This pairing isn't much better but it is still better.
EDGE: ALTERNATE 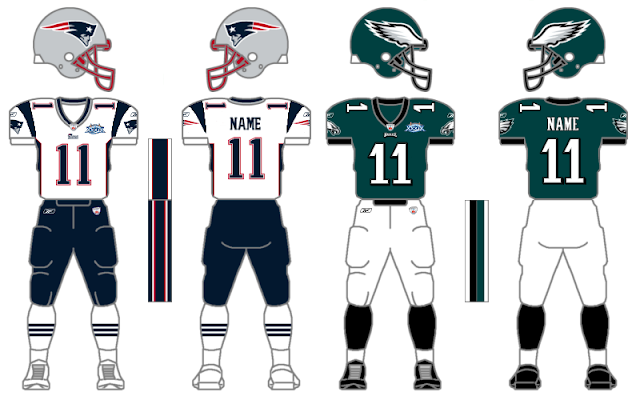 ACTUAL: Not bad. But not the winner for two reasons. One - just not a fan of the Patriots' white uniform. 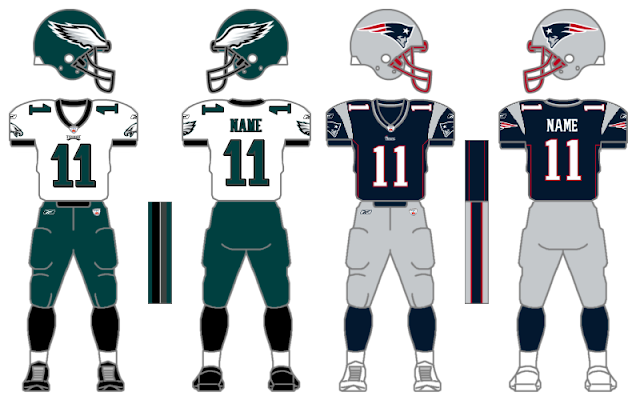 ALTERNATE: And two - I REALLLLLY like the green pants for Philly.
EDGE: ALTERNATE 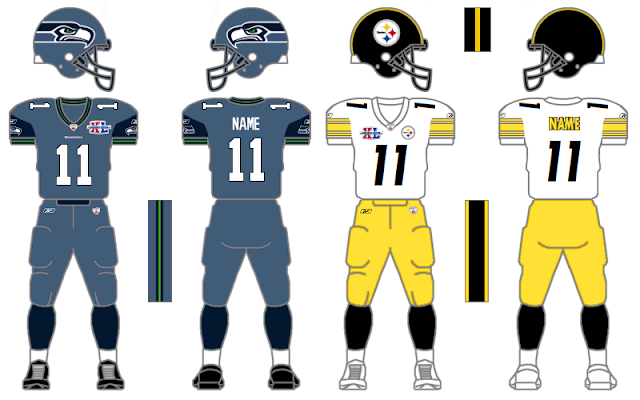 ACTUAL: The Steelers embraced their inner superstitions and opted to wear their 'away' combo in which they had won all three of their road playoff games leading up to XL. Most people complained about Seattle's mono-grey/mono-blue/mono-whatever-it-is. Still, this combination was better than their alternate. 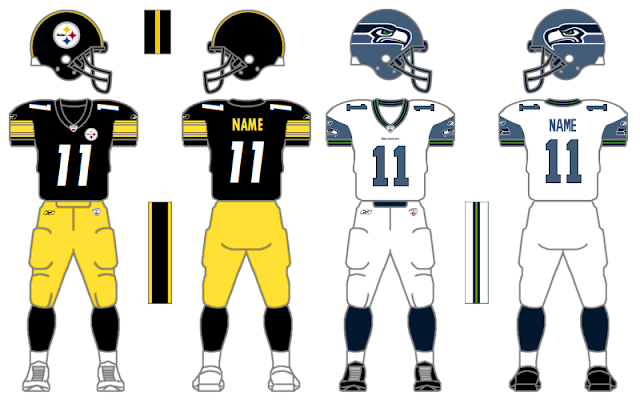 
The ACTUALs reclaim a bit of their lost mojo from last week's drubbing and eek out a 3-2 advantage that pushes their lead to 23-15. With only six games left, ACTUAL has gone past "dormie" and clinched the decision, but how close can ALTERNATE make the final tally?

Come back next week for the most recent six contests!
Bill Schaefer
0 comments