So we are now in postseason mode at the GUD and here are the rankings for the first weekend of playoff action.


Bengals-Texans: CIN in white/black, HOU in all dark blue.Rather pleased and surprised that both teams opened the 2012 playoffs in dark pants. This game was a rematch of last year's Wild Card Game. The difference being that both clubs wore white pants!. It might have been better if say, the Bengals wore black pans while the Texans would have checked in with white trousers. But the Texans pulled off the surprise with the all navy look. I liked it because it is a rarely seen encounter and gives it a nice color boost.

Vikings-Packers: MIN in all white, GB in green/yellow. Same matchup as worn in Week 13. And liked this then and I like it now. Somehow, the Packers green/yellow brings out the best in any uni matchup. Here, it makes the minimal purple on the Vikings (clad in white) pop with sparkle and not a purple haze. The design elements of the Vikings' unis may be one thing, but the shade of purple is rich and right.

Colts-Ravens: IND in all white, BAL in purple/black. The Colts, in their stark whites against the Ravens in two-toned dark, the purple jerseys and the black pants. his was the best possible uni matchup for this game and it wins high marks from me. Had the Ravens gone all black, it would have been overpowering. Had the Ravens rocked white pants, it would dulled my senses with too much white. But this was the right mix. The Colts blue trim actually complimented the Ravens kit. Very nicely done, guys.

Seahawks-Redskins: SEA in all white, WSH in burgundy/yellow. Seahawks with a mild surprise by deciding to go all vanilla while the Skins appeared to junk the white pants. Good thing they did go with yellow pants for this one, with the Hawks in all white. I think given the choice between the white, gray or navy pants, Seattle would have been best off with the gray pants, a good half way compromise for this encounter. This was good. It could have been better, but then again, it could have worse.

So, in a tight race with no real stinkers in the lot, this is how I rank these games:

Please check in next week as we critique the Divisional Round.
0 comments

This is the final installment of the series that will determine once and for all whether or not we were treated to the best-looking "Super Sunday" given the teams we were dealt. 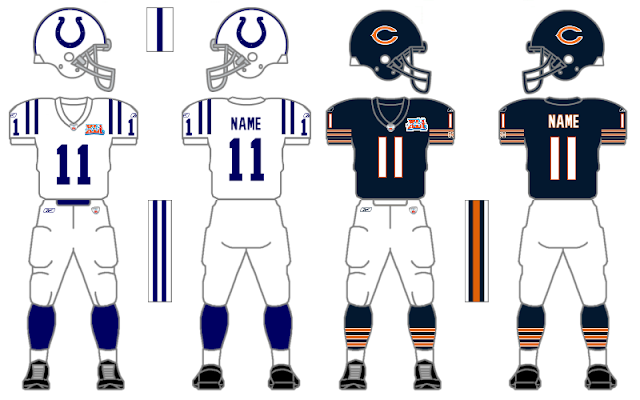 ACTUAL: Great to see the Bears in navy but even as a Bears fan, this game would have looked much better had... 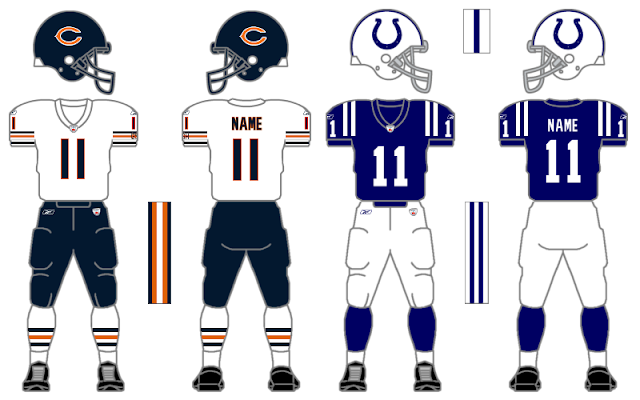 ALTERNATE: ...the Colts been in blue. 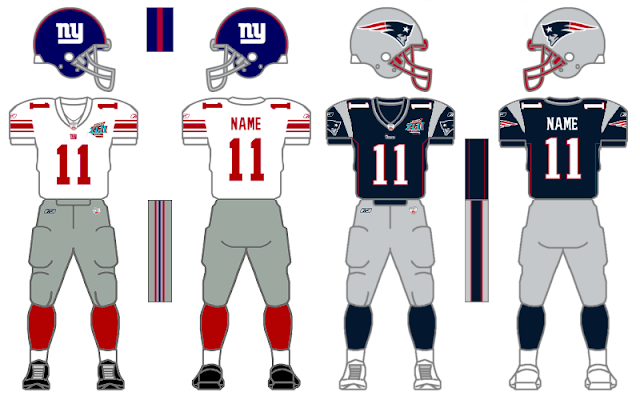 ACTUAL: Undefeated New England against the 'upstart' Giants. This is how this game needed to look. 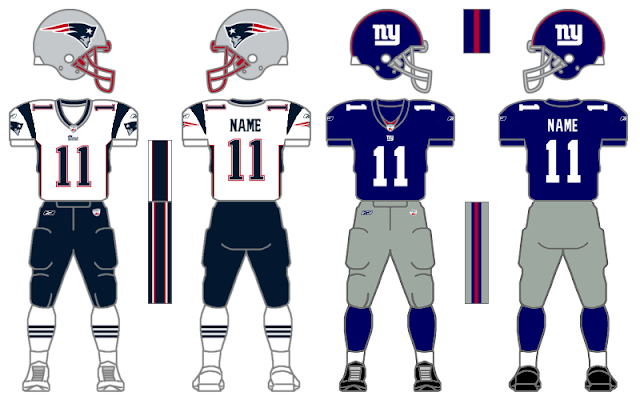 ALTERNATE: This just wouldn't have been right.
EDGE: ACTUAL 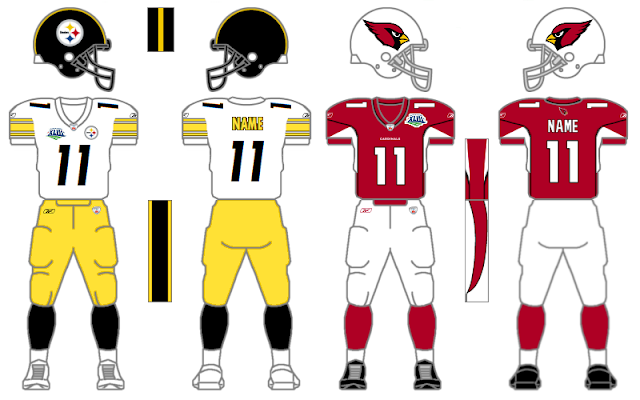 ACTUAL: A very good looking pairing with red being prominent for one of the few times in the game's history. 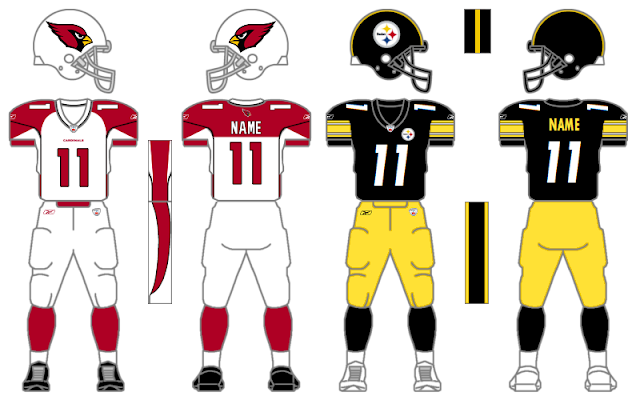 ALTERNATE: A tease of red just isn't enough in the comparison.
EDGE: ACTUAL 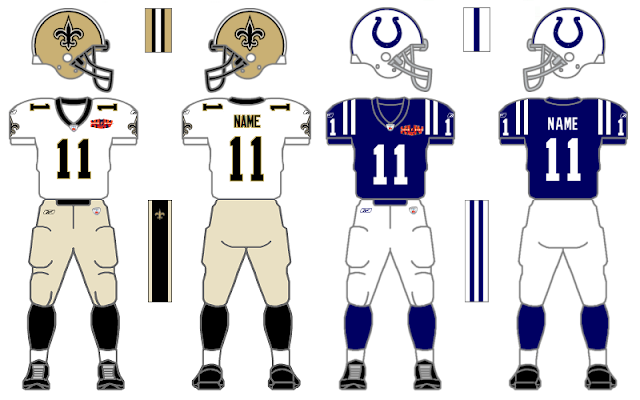 ACTUAL: If only New Orleans would have their pants a little more gold and a lot less pale. Still enough to win this matchup, though. 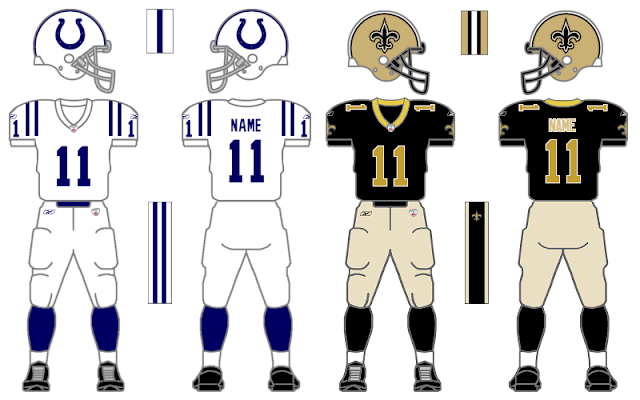 ALTERNATE: Much like the Cowboys' mis-matched blues and silvers, this Saints' black jerseys/gold pants combo has four different shades of gold (helmet, collar, numbers, & pants). The ACTUAL pairing with the Saints in white jerseys saves us.
EDGE: ACTUAL 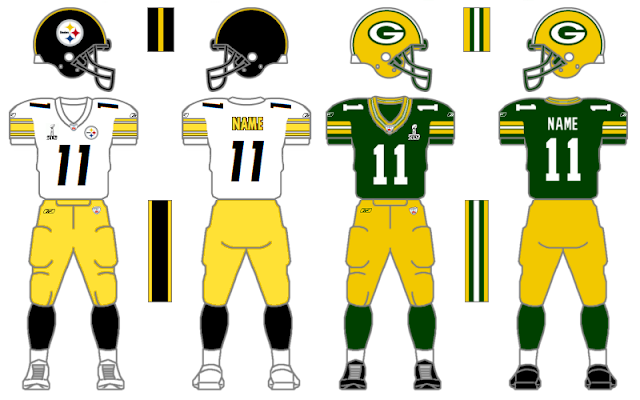 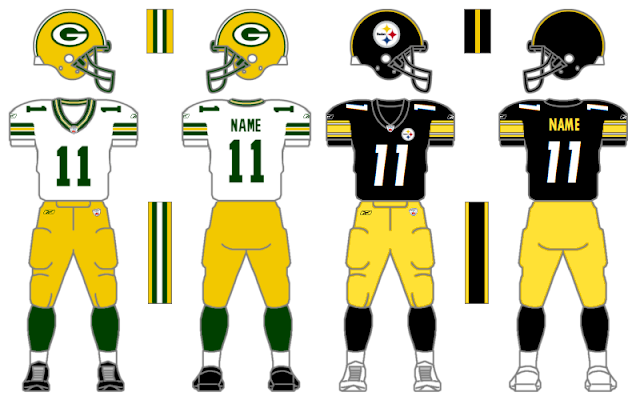 ALTERNATE: ...a lot of yellow and some black?
EDGE: ACTUAL 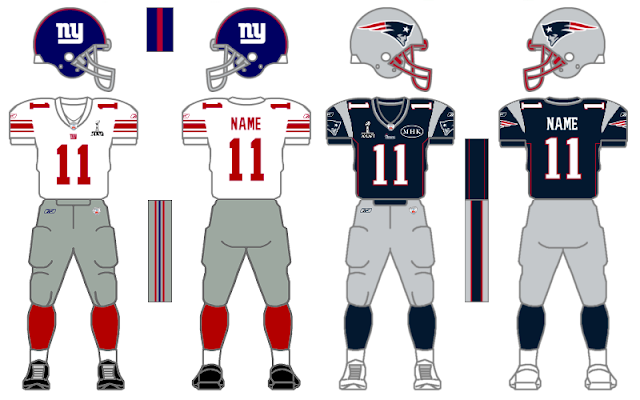 ACTUAL: I'm having the strangest feeling of deja vu...all over again. 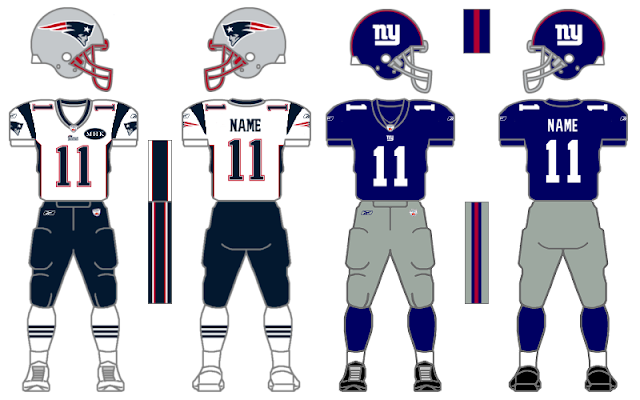 ALTERNATE: Just so that this game isn't confused with the one four years ago, I'd have like to have seen a different pairing.
EDGE: ALTERNATE


Forty-six years of history tells me that, with a 4-2 ACTUAL edge in these last six games, the ACTUAL pairings that we saw were right 29 out of 46 times or 63% of the time.  Roughly two of every three games were the 'right' uniform pairings.

Upon this series' completion, I will go to the voting mechanisms and see whether or not all of you out there in GUD-land agreed with my analysis more often than not.

The series is done (for now) but the number-crunching is yet to begin!
Bill Schaefer