As many of you know, from time to time, I will make a journey down to the Library of Congress (LOC) to peruse the treasure trove of the Newspapers & Periodicals Reading Room.  It is here that so much of what you see on the Gridiron Uniform Database (GUD) has made its way.

My journey on May 3, 2014 was twofold in intent.  1) To discover and hopefully close out some TV commentator information for another website (and indirectly, this one) and 2) to try and close the gap in missing uniform matchups from the 1940's.

As you likely know, the GUD has been fortunate enough to have every uniform matchup from every regular season and post season game going all the way back to 1949.  Going back another nine seasons, to 1940, we are not quite as fortunate.  My visit on May 3rd to the LOC to re-visit every one of these games was to hopefully strike gold somewhere along the way.  In some cases, I have researched as many as SEVEN different newspapers seeking at least either a photograph from the missing game, or in the newspaper account of the game something describing who wore what in the game.

I was lucky enough to find ONE game photograph from the Most Wanted list, courtesy of the October 8, 1945 edition of the long defunct Philadelphia Record.  It was from the October 7, 1945 game between the Chicago Cardinals and the Philadelphia Eagles at Shibe Park.  The Cardinals were in their normal outfit of white helmet, red jerseys, white pants and red socks, with the Eagles in their silver and green helmets, white jerseys with green side panels, green pants and green socks.  Hey, that knocks at least one game off the list!

Some of you out there might find this incredulous, that at least one of the many newspapers in existence in those days couldn't have at least ONE photograph from a professional football game of the local team in the next day's paper.  In 2014, that really would be unthinkable.  But consider how the sports world was viewed in the 1940's:

So, after sorting through as many newspaper sources as exists at the Library of Congress, I am waving the white flag as far as using the facilities at the LOC.  While one cannot find a more exhaustive single resource for newspapers as this marvelous library, I think I have gotten as much out of its resources as I can for this particular era (the 1940's).

For the record, these are the games for we which have NO visual record of the uniforms worn during the 1940's:

With the exception of the 9/26/46 LA-BUF game and the 10/12/46 SF-LA game (the Los Angeles Herald-Express was not printed due to a strike), a minimum of four newspapers was researched for each game.  The LOC does not have the Buffalo Courier-Express on file, but an online resource with the Courier-Express in its files were used.

This does not mean that photographs from these games do not exist, but finding same from any of these games will be extremely difficult.  We do see random wirephotos of ancient football games pop up on ebay from time to time and it is likely that either there or a newsreel clip is where our hope will lie to find some sort of evidence as to who wore what and when they were worn.

So the call goes out.  If anyone reading this blog would happen to stumble upon a photograph or two from the Most Wanted list, please either contact the GUD either via the "forum" or the "contact" tab with your finding at the GUD's website. 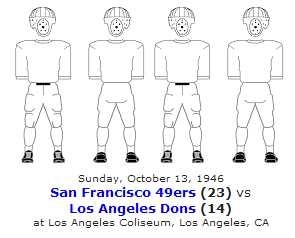 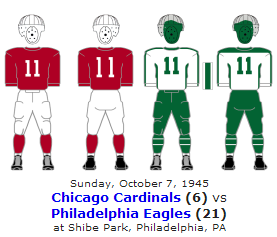 The GUD will gladly acknowledge your submission and you can feel a sense of pride knowing that you have made a vital contribution to the cause of  pro football (uniform) history!