The Problem With The Internet 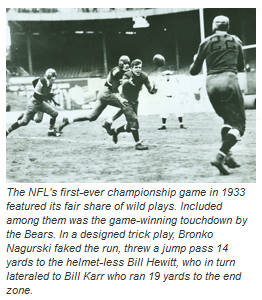 The Problem With The Internet
by Rob Holecko
The problem with the internet is you can't always believe everything you see, even when the source is somewhat reputable.  Yesterday we unveiled a new feature here at The Gridiron Uniform Database called "On This Day..." where we will feature past games played on this calendar day from now through the Super Bowl.  In researching today's December 17 game, we were preparing the head-to-head matchup of the 1933 NFL Championship game, and in stumbling upon the Pro Football Hall of Fame's website we came upon this picture and caption to the right, purported to be the 12/17/33 NFL Championship game between the Giants and the Bears at Wrigley Field.
Not so fast, my friends!  After consulting with the other two-thirds of the staff, our Bill Schaefer and Tim Brulia told me that this picture is indeed not from that game.  The grandstands, they told me, indicates that that game appears to be at the Polo Grounds, therefore is it probably from the 11/19/33 regular season game between the same two teams.  After further research, I came across this contemporary picture from the Pittsburgh Press via Google News, that indicates that yes, the Bears did wear white in that game: 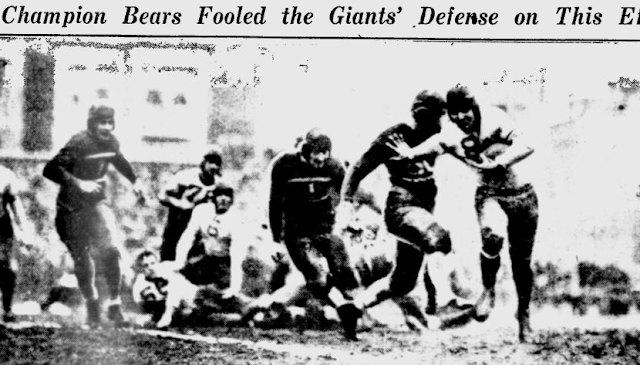 But what about the other picture?  Well apparently the folks at the Hall of Fame believe it is from the Championship Game, and because of that other people on the internet believe that it is true, and they blog about it, and the error gets compounded.  (Note: after the publishing of this article, Keith Yowell, author of 'Today In Pro Football History,' whose comment you can read below, updated his site and corrected the picture to the above actual image from the 1933 NFL Championship Game. Special thanks also to Tom Farley for bringing our research to Keith's attention. All any of us want is accuracy. Now if only the Pro Football HOF can correct their information, we'll be all set!).
Nonetheless, as our research shows, the Bears did wear white in that game, and the picture from the HOF (and elsewhere) on the internet was not from that game.  It just goes to show that you shouldn't assume anything on the internet is entirely accurate without double-checking it yourself, no matter what the source is, even if it is the Pro Football Hall of Fame.  Here at the Gridiron Uniform Database, we'll always strive to bring you the most accurate facts and whenever we do uncover new information, we'll bring it to you and update accordingly.
Speaking of which, sometime in the new future, we'll be bringing you some new discoveries about these mid-1930s Giants, thanks to our head researcher Tim Bruilia, working with "bigbluelarry", our friend Larry Schmitt.  Without further ado, the "On This Day..." 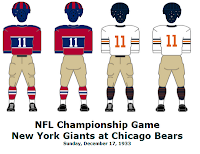 On This Day...
The NFL split into Eastern and Western divisions in 1933 and the Chicago Bears and the New York Giants were the division champions and met in the first ever scheduled Championship game on December 17.  These teams met in November, the aforementioned game at the Polo Grounds, which the Giants won 3-0.  This rematch was an exciting game full of trick plays and exciting action with players such as Bronco Nagurski and Red Grange, and the Bears held on to win 23-21 and claim their third NFL title.  You can read in-depth write-ups of the game here, here and here (just remember the pictures may not be from the correct game!)

Both of these 1933 Giants-Bears matchups have been added to our 'matchups database,' and if there is a game you'd like to see in there that hasn't been added yet, let us know and we'll get to it. We'll be back tomorrow with another past NFL matchup, another game with an exciting memorable lateral and what a surprise, it features the Buccaneers again!
5 comments

Tags: Bears, Giants, On This Day

While there are still three weeks left in the NFL regular season (which is unfortunate if you are a Buccaneers fan like some of us around here) we have reached the end of the academic year, which for me at least, means I will have more time to devote to the Gridiron Uniform Database.  So check back more often to this blog, as we may, for the time being return to the "daily update" format that was so popular and successful during the summer.  Hopefully in the coming weeks, we'll be able to make a huge dent in the past years head-to-head matchups.  If you have any particular past year matchups you'd like to see, like for instance this one, post a reply or in post it in the forum and we'll add it.  In the meantime, we'd also like to debut a new feature today called "On This Day..."   Every day, from now through the Super Bowl, we'll be featuring a past NFL matchup that occurred on this calendar day.
On This Day... 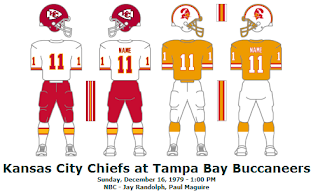 Today, in the first of this series, we'd like to feature the December 16, 1979 matchup between the Tampa Bay Buccaneers and the Kansas City Chiefs.  This was the Bucs' Cinderella season, after going 0-14, 2-12, and 5-11 in their first three seasons of existence, the Bucs started out 5-0 behind the play of second-year QB Doug Williams, RB Ricky Bell and a great defense led by Lee Roy Selmon and Richard Wood.  After 12 games they were 9-3 and needed one more win to clinch their first ever playoff spot.   With three straight losses, however, to Minnesota, Chicago and the 1-13 San Francisco 49ers, the Bucs' playoff hopes came down to this final game.  A win would mean the NFC Central title, a loss would mean the Bears would take the division and the Bucs wouldn't even make the playoffs.  A torrential downpour caused a sloppy game and a defensive battle against the Chiefs.  One Neil O'Donoghue field goal was the only scoring, and the Bucs prevailed 3-0.
This game was featured on NFL Networks' Top 10 Bad Weather Games of all time, and you can watch the segment on this game here.
We'll be back tomorrow with a great game from a past December 17, and now here's Tim with this week's uniform rankings:
~ ~ ~ 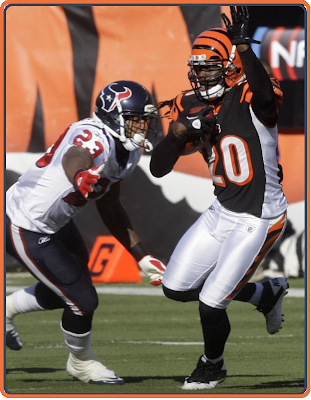 Week 14 Uniform Rankings
by Tim Brulia
Welcome to the blog for Week 14. No less than 8 games involving all white in the mix:
Browns-Steelers: Browns in looks like a run of the table in white/white this season. Steelers with their second and last game in the black/white throwbacks. Picture yourself at Forbes Field in the 1960-1962 era. Jim Brown and Ernie Stautner. Kind of the same feeling in 2011.
Chiefs-Jets: Chiefs rocking all white for the second straight week while the Jets go green/white. Somewhat of a Holiday feel, but the Chiefs would look so much better in red pants here.
Buccaneers-Jaguars: Battle of Upper Florida. Bucs go white pewter and the Jags with the teal/white. This one I like because the Jags go teal and the Bucs bless us everyone with pewter pants. Thumbs up to these two.
Patriots-Redskins: Pats go white/navy and the Skins, apparently ditching yellow pants for good this season, go burgundy/white. Lotsa color here; silver, red, burgundy, yellow, navy. Like this one a lot.
Falcons-Panthers: Falcons all white and the Panthers go black/silver. The nicest colors, red and Carolina blue, are merely trim colors in this matchup. Alas, a few knockdowns on the list for that.
Colts-Ravens: Colts return to their onetime home in all white and the current Charm City residents go purple/white. A normal but not that exciting matchup.
Eagles-Dolphins: Eagles in the green/white and the Fish in the all white. Again, I am not that worked up over this uni matchup.

Vikings-Lions: Vikes are another team going all white with the Lions in standard Honolulu blue/silver. The purple and yellow trim save this game from being a rather meh affair. Lions still looking good.

Saints-Titans: NO back in the gold pants complimenting the white jersey while the Titans roll with the columbia blue/navy blue look. I happen to think this matchup works well.

Texans-Bengals: The Tex rocking white/navy and the home Bengals go with the black/white get-up. Another combo that fits rather well.

Bears-Broncos: Bears in the white/navy standard and the Broncos show off the all blue look again. Oddly, a little too much dark blue for me. Broncs should've gone with white pants here. Intriguing nonetheless.

49ers-Cardinals: Niners go with standard white/gold and the Cardinals, after keeping the red pants on the shelves all season long suddenly get a case a scarlet fever two weeks in a row. And, the red pants would gone so well earlier, now pose too much red in this matchup. Should've stuck with white pants here.

Bills-Chargers: Bills do the all white thing, but it looks like the white socks are out for the season as they keep with the blue socks. Chargers with their navy/white look. Just once, I'd love to see the Bolts go all navy. Here, it would have been fantastic.

Giants-Cowboys: Giants in the blue/gray and the Cowboys in white/quasi-silver. BUT, these are not your normal Giants' blue/grays. They are the G-Men's blue/AWAY grays, where the side stripes are separated and a wee bit thinner than the HOME gray pants, with the blue/red/blue stripes. A nice occasional kink to the standard fare.

Rams-Seahawks: Rams in all-white and the Seahawks, who have never stained a home game in their entire history with a white jersey, go the usual all Seahawks blue. For the horned sheep, I think the gold pants would have been the way to go here. But white - to me - goes better than blue pants for this occasion.


So the Week 14 lineup goes as follows:

Tim will be back next week with the Week 15 sartorial review, and we'll see you tomorrow with another "On This Day..."
0 comments