13) Dolphins-Bills: MIA in white/white, BUF in blue/white. And I continue to wail over the loss of the Dolphins in aqua pants. Detracts from the very sharp Bills blue over white goodies. 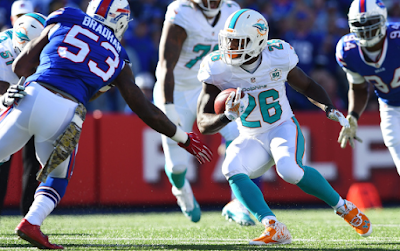 12) Raiders-Steelers: OAK in white/silver, PIT in black/yellow. I know this is considered by many, if no most, of my peers as a classic uni matchup. But from a color aesthetic, it gives me not much joy. The Steelers iconic black tops and yellow bottoms, while beautiful in their own right, is brought down by the pallid white jersey and the sleek silver trousers of the Raiders.

11) Broncos-Colts: DEN in white/white, IND in blue/white. The battle of the horses is more of a trot than a full gallop. Unusual when I prefer the Colts uni to their opponent. But here, I do. Just enough Bronco orange trim to keep this one from being left in the stable.

10) Rams-Vikings: STL in white/white, MIN in purple/white. So the Rams decide to breakout the all white gear against the tried and true Viking purple over white. The result is disappointing. A little too much white for my might. Rams definitely should have suited up in the navy pants.

9) Falcons-49ers: ATL in white/white, SF in red/gold. Better than anticipated. While the Falcons all white look usually is a downer for me, paired with the neat-o Niner red on top of gold threads, it gives a nice coplimentary aura. Maybe it's the sharply contrasting Falcon black helmet that does the trick?

8) Browns-Bengals: CLE in white/white, CIN in black/black. First time for the Bengals in all black this season and the Browns go with the all white look. I think the time would have been right for the Browns to try an unused combo, white over orange. As such, it's OK, not offensive, but OK.

7) Jaguars-Jets: JAX in white/black, NYJ in green/white. Well, not as bad as I would have originally expected. The Jets resisted temptation and went with a more conservative approach against the Jags in the white over black. And for some reason, I am more drawn to the teal elements of Jax than normal. 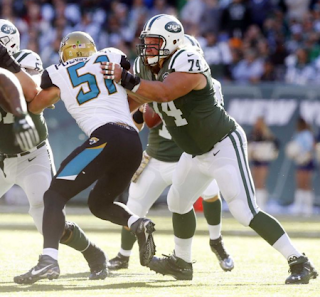 6) Eagles-Cowboys: PHI in green/white, DAL in white/mint. One of the better NFC East matchups. The Eagles shade of green, which normally takes a hit, looks sweet against the Cowboys many hues of blue.

5) Redskins-Patriots: WSH in white/yellow, NE in navy/silver. Nice matchup. Enjoy the variety of colors on display. Burgundy, silver, yellow, navy is a nice enough palette to get through. 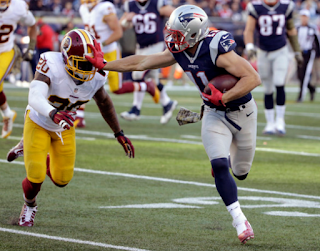 4) Bears-Chargers: CHI in white/navy, SD in navy/white. This one trips me up. At times, I think this is as good as it gets for the week. Then I take a second look and it seems to lack a lot and it feels like a bottom feeder. A lot of navy to be sure, a lot of opposites in terms of helmet, jersey and pant contrast. But at the end of the weekend, it's a little better than average. The trim colors (orange, powder blue, yellow) are the helpers here. They add a subtle, yet needed boost to this uni pairing.

3) Giants-Buccaneers: NYG in white/gray, TB in red/pewter. There's a certain zing to this matchup. The Giants tidy white over gray look, depending on the opponent, can look sharp as a tack or dull as a doorknob. The opponent's digs, the Bucs, wear the really nice red jersey with the pewter pants. The Bucs red jersey is sharp, despite being ridiculously busy. And with that, this one as I said, zings! 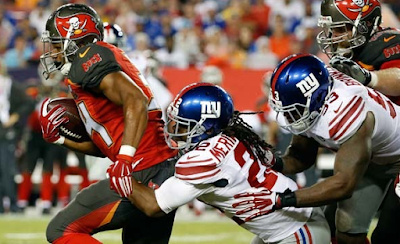 2) Packers-Panthers: GB in white/yellow, CAR in black/silver. A surprisingly good matchup. Not normally thrilled with the Panthers dark garb, but it pairs well with the Pack's white over yellow scheme. 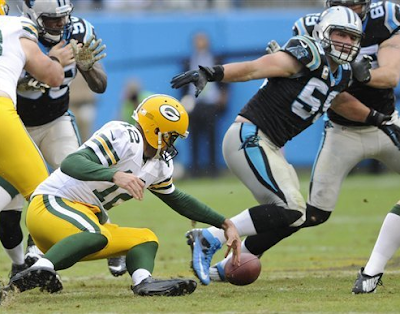 1) Titans-Saints: TEN in white/navy, NO in black/gold. Somewhat surprised that the Saints haven't trotted out the all black ensemble yet. ANd that's a good thing here. It allows the Titans white over navy look to breathe a bit while the Saints gold pants shimmer nicely. 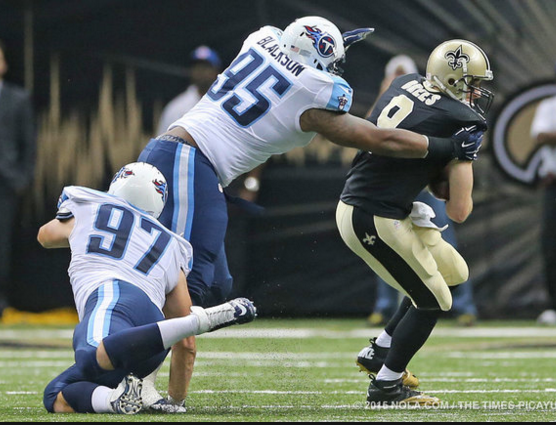 Reporting back for duty next week. See you then!
3 comments