Choice cuts (sleeves, that is)!! 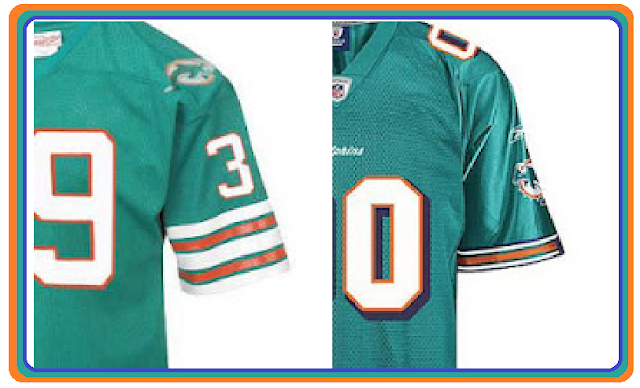 Choice cuts (sleeves, that is)!!
by Tim Brulia

For those of you who keep track of such things, you'll notice that as we have evolved the uniform template of the Gridiron Uniform Database through the years, apart from the obvious evolution of the helmet, the other noticeable evolution is the jersey.  In particular the length of the sleeves.  From the beginning, for many years the sleeves were full length, ending right at the wrist.  Around the mid-1950's we started to notice that the sleeve length became a 3/4 length, ending right around the mid forearm. When lighter weight and mesh materials were introduced in the mid to late 1960's, for the first time, we began to see an effect on the designs, stripes and other accessories.  In 1966, the Boston Patriots became the first team to design a sleeve pattern with the length of the sleeve in mind, with a short sleeve length that ended above the elbow and featured stripes on the sleeve edge.  By 1974, it appears that virtually all the teams perfected sleeve striping and TV number features with the lighter jersey materials. 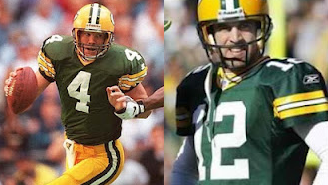 As we come to the 1990's, the sleeve lengths grew even shorter, to something we might call 1/4 length, ending somewhere around the upper arm.  It is this era that this blog is focusing on.  The sleeve cut was again having an impact on striping, in particular on the following teams: Bills, Lions, Packers, Vikings (purple jerseys only), Browns.  Several teams, like the Cardinals (white jerseys only), Oilers and Dolphins, simply sharply reduced the size of the sleeve stripes to a virtual needle-width.  For the aforementioned teams, the preferred sleeve cut by the great majority of players, for several years represented a truncated stripe design on the sleeves, not the original intent of the suppliers.  As a result of a probable lack of a variety of versions of the striping template of the jersey suppliers, the teams had no choice but to either adapt to the changes by following the Oilers, Cardinals and Dolphins leads by dramatically thinning the striping pattern, or just go with the "chopped" look until they could adopt a new stripe design or simply revise the look of the jersey.  In several cases (Buffalo, Detroit, Minnesota purple) the cut-off sleeves even gave the impression of a new sleeve stripe pattern.
It worked out like this for the teams in question:


Bills: Buffalo lost the lower of the two sleeve stripes due to the sleeve shortening, but adapted by a full uniform redesign in 2002, with contrasting thin sleeve edges for both sets of jerseys.
Browns: Cleveland's sleeve issues were unintentionally solved when Owner Art Modell bailed on the city and moved the Browns to Baltimore in 1996, and renamed the team the Baltimore Ravens. The "new" Browns that took the field in 1999 used the Lions idea by returning the full stripe package to the jerseys by shifting their TV numbers up on top of the shoulders with the five stripe combo just beneath.
Lions: Detroit basically returned to their full northwestern (NW) stripes by hiking them up to a position just below the shoulders and placed their TV numbers fully on the shoulders in 1999.
Packers: Green Bay solved their stripe "problem" by fully removing the lower two sleeve stripes in 1997, keeping a three stripe combo in place.

Vikings: Minnesota had shoulder stripes on their white jersey, so this wasn't a problem. But for their purple jerseys, the awkward sleeve striping was solved in 1996 by dumping the NW stripes and replacing them with thin sleeve edge stripes.
With the phase in of Reebok's micro sleeves complete by 2002, other teams that faced similar striping and numbering issues had no choice but to adapt, each in their own way.  It may not be as eye-appealing as we would like, but tradition is a strong thing when it comes to many a team's on-field identity (Steelers and Bears as strong examples).  Who knows what the Nike brand holds in store for us later this year?  We will find out soon enough and we at the Gridiron Uniform Database will bring you the details as soon as the teams hit the field.
It's what we do.
0 comments